In the midst of the coronavirus pandemic, many Americans have been able to tuck away more cash than ever before. And though consumer spending has now surpassed pre-pandemic levels, some Americans will still have a net gain in savings.

For several months in 2020 and 2021, Americans were able to save more of their income than they had in about 45 years, according to federal data. Indeed, as recently as July, 35% of Americans say they’re saving more money than they were before the pandemic, according to a new survey from NerdWallet. While some of that excess savings was sent back into the economy when businesses reopened following pandemic restrictions, much likely remains in household coffers.

Understanding how household savings have changed over the last few decades and are likely to change in coming months — as well as how inflation may affect those savings — underscores the need for savers to know how to get the most out of the money they’ve been able to stash away.

The personal saving rate is a figure from the Bureau of Economic Analysis measuring what’s leftover in household income after taxes and spending. It’s one indication of economic health and is used by lawmakers, economists and businesses in everything from budget estimates to analyzing household financial behavior. 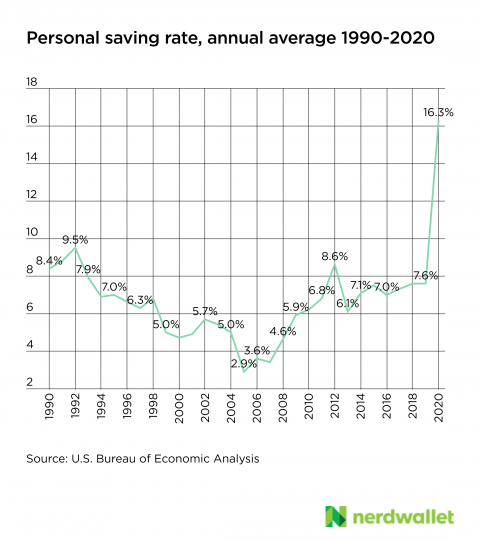 From 2000 through 2007, the rate averaged 4.6%. At its lowest, before the mortgage crisis and subsequent Great Recession, confident Americans put their money into assets — like homes — and saved at historic lows. As the smoke cleared, in the decade from 2010 through 2019, the rate averaged 7.3%, close to its overall long-term average. And then 2020 arrived.

In April 2020, as Americans were receiving their first relief checks and many businesses shuttered their doors to the public, the saving rate hit an all-time high of 33.7%. It peaked again in March 2021, as the latest round of relief payments were received. And as of June, it’s 9.4%.

In the coming year, the personal saving rate will likely decline a bit more to settle nearer the historic average and pre-pandemic levels. Inflation and consumer confidence will be the key drivers here — people will spend more as prices rise and as they feel better about where the economy is headed. Coronavirus variants and their potential broader economic impact may make spenders a bit skittish, though, so we could see a few sporadic monthly jumps as folks hold back in an abundance of caution. 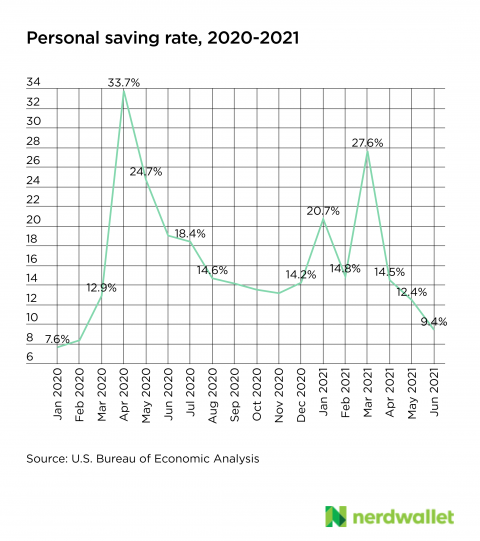 Where did the savings go?

A portion of this excess savings was sent back into the economy as businesses opened up, restaurants welcomed more diners back and consumers felt better about mingling. But not all of it.

Some economists predicted early on that the inevitable flood of spending could destabilize the economy, but while there has been some difficulty keeping up — see recent high lumber and used car prices — this is mostly due to supply chain issues and not solely an influx of pent-up consumer demand.

Think about it this way: You didn’t travel by air for all of 2020 because you couldn’t, or you made the determination that the risk wasn’t worth taking. Now, however, you're willing to accept the risk that remains and will fly a few times in 2021. You’re far more likely to return to pre-pandemic travel habits than you are to spend both your 2020 and 2021 travel budgets, essentially doubling what you’d normally spend on travel to make up somehow for what was lost in 2020. The same goes for dining out or going to concerts — your spending habits are far more likely to resemble pre-pandemic habits than they are some sort of spending catch-up.

About one-third (34%) of Americans say they’re still spending less than they were before the pandemic, according to the recent NerdWallet survey. That’s down from 48% who said they were spending less in May 2020, signaling that some spending has yet to resume.

It’s safe to say that at least some Americans have a small pile of money they didn’t have before spring 2020. So what’s the best way to use it?

How to make the best use of what remains

Unfortunately, interest rates are very low right now — lower than inflation. This isn’t great news for savers, as the purchasing power of what you’ve saved over the past 18 months may actually decline in the short term. Shoving it into a traditional savings account, or worse, under your mattress, won’t help it grow.

To get the most value out of your savings, make paying off high-interest debt your top priority. Average credit card interest is at about 16%. But even your car payment, financed at the average 5%, is a worthwhile target. By paying off interest-accruing debt right now, you’re saving yourself from what could be exorbitant interest payments over time, freeing up available credit for if you need it down the road and putting your savings to work now, before it loses any value.

If you’re free of high-interest debt, then look at your emergency fund: Do you have enough to cover several months of living expenses should you lose your job or have to deal with another financial crisis? If not, add more. While your emergency fund — generally kept in an easily accessible place like an online savings account — won’t grow in the short term, it will be readily available. For now, the cash here is more of a safety net than a true investment. Once interest rates rise above inflation again, you can be more selective about the type of savings account your money is held in.

Injecting your retirement savings with a lump of cash is another way to protect what you’ve amassed. Even if the market is less than stable in the near future, long-term retirement investments provide a pretty reliable return.

The article As Pandemic Saving Settles, Inflation Could Sap Your Surplus originally appeared on NerdWallet.

U.S. consumer prices rise by most in nearly 40 years

Side hustles that are perfect for both introverts and extroverts

Side hustles that are perfect for both introverts and extroverts

Why you should expect higher prices on milk, eggs, cheese and meat

Why you should expect higher prices on milk, eggs, cheese and meat

5 steps to strengthen your finances in 2022

In 2022, setting grand financial goals may not be realistic for every budget, but there are still smart steps you can take to shore up your finances.

How to Get Free At-Home COVID-19 Tests: Key Details About the Government’s New Plan

What you need to know about ordering free tests, plus eligibility requirements and insurance reimbursement.

After Build Back Better failed to pass in 2021, the opportunity is still there in 2022 -- at least for now.

A USPS website is accepting orders for four free tests, a day ahead of schedule.

Planning to Claim Social Security at 67? You May Need to Rethink That

While 67 may seem like a good age to sign up for benefits, you may want to choose a different age.

The boom in crypto jobs occurs as more money pours into the market.

Applying to college typically comes with some uncertainty, but this year’s applicants are tackling one additional question: What should you do when a pandemic has limited what goes into your…

Is Now a Good Time to Refinance Your Mortgage?

At current mortgage rates, 7.1 million mortgage holders could lower their interest rate by at least 0.75% and are well-qualified to do so.

We're starting off 2022 on shaky ground. And that's reason enough to want additional cash on hand.