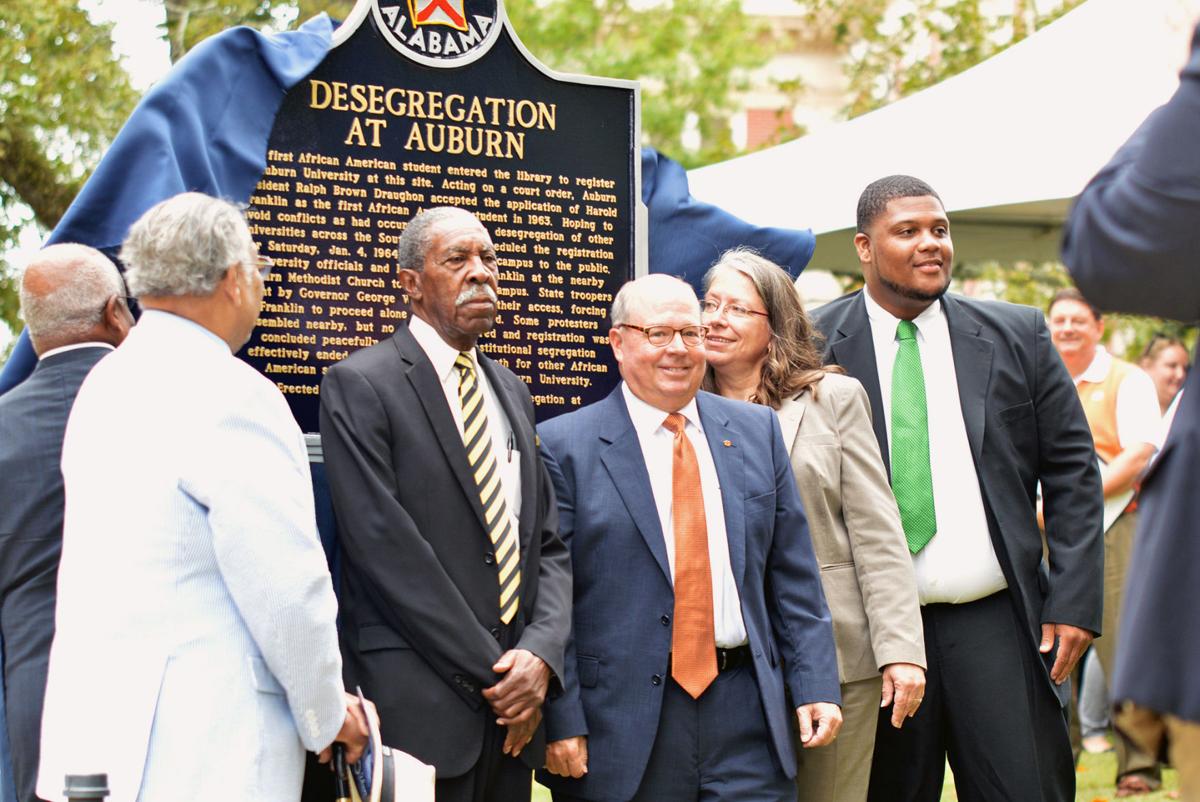 Harold A. Franklin, Bob Dumas, Constance Relihan and Sae'Breon Stiles pose in front of the historial marker for photos during the unveiling on Sept. 24. 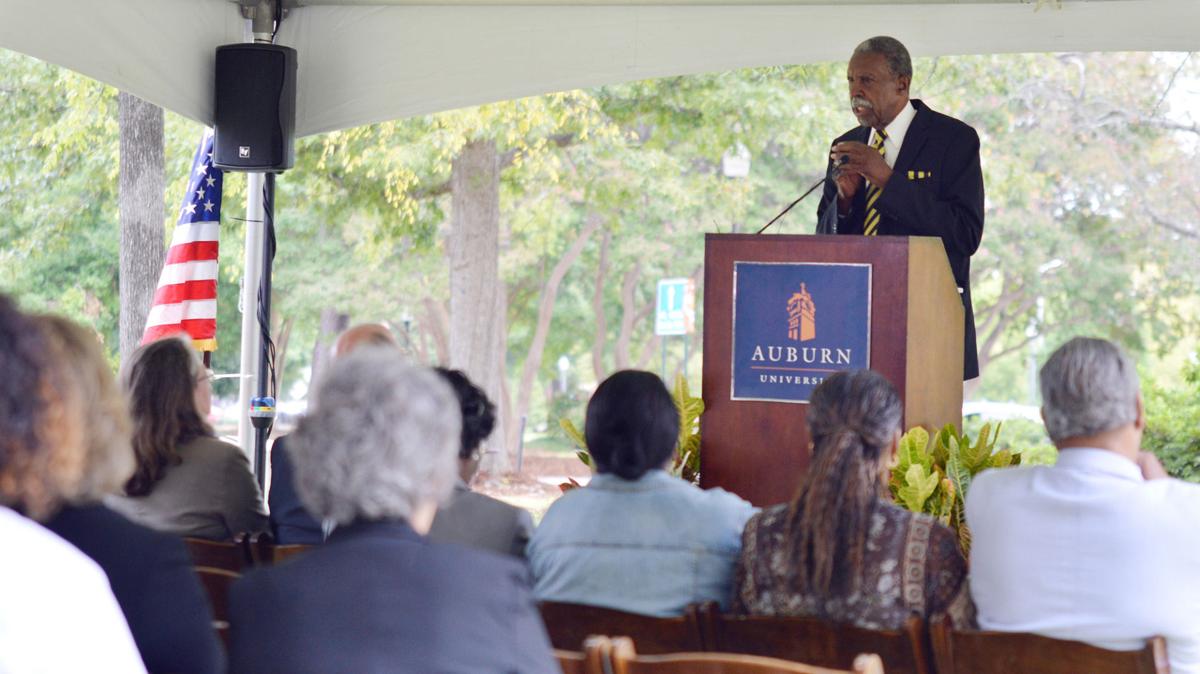 Harold A. Franklin speaks Thursday before the unveiling of the historical marker on the green space between Ralph Brown Draughon Library and Mary Martin Hall on the Auburn University campus. The marker commemorates the 1964 desgregation of the university.

As men and women from 96 countries walk through Auburn University’s campus today as representatives of both their places of origin and Auburn’s academic population, the university landscape now boasts a physical reminder of the one person who set the precedent for them to do so more than 50 years ago.

Dr. Harold A. Franklin stood on the lawn beside the Ralph Brown Draughon Library on Auburn’s campus Thursday and glanced up at a metal marker newly-established in the earth, reviewing the series of events it described.

“The historic event that we celebrate today gave Auburn University the opportunity to take an important step forward in its journey toward becoming a more inclusive campus,” said Constance Relihan, Assistant Provost for Undergraduate Studies. “Through the efforts of many members of the Auburn family over the years, a quality education at Auburn has become accessible to more people, and in the process, the Auburn experience has been enriched for every one of us.”

The marker tells the story of Franklin arriving at Auburn University on Saturday, Jan. 4, 1964, to register for classes, at which time state troopers sent by Gov. George Wallace attempted to impede his progress. But eventually Franklin was able to register peacefully.

Franklin said he didn’t originally have plans to attend Auburn, but his lawyer, Fred Gray, who attended Thursday’s ceremony, convinced him otherwise.

“My lawyer talked me into it,” Franklin said. “I wanted to go to law school because Thurgood Marshall, first African-American to sit on the United States Supreme Court, was my idol — one of my idols. We had to have five lawyers who had been practicing in the state for five years to verify your character prior to admittance to law school.”

On his first day on The Plains, Franklin, 30 years old at the time, initially went to Auburn United Methodist Church, where he was met by an FBI agent and local ministers to escort him on campus. Rumor had it that state troopers planned to plant a gun in Franklin’s belongings to have him kicked out of school, and he was also questioned by the FBI.

“I said something to the effect, ‘I’m going to school, I’m not going hunting,’” Franklin recalled. “I don’t let anything get me down, and that really upset everybody.”

On his way to campus to register for class, a state trooper stopped Franklin and asked him for his student ID.

“I said, ‘Hell, how can I have an ID, I haven’t registered for class yet,’” Franklin said, adding that the then showed his driver’s license.

“After that, everything went alright. Then I ended up in the wing of the dormitory by myself, though no problem because I’ve been alone all my life anyway.”

Franklin did not complete his degree at Auburn, but went on to earn a master’s degree in history at the University of Denver and then taught and held administrative positions at Alabama State University, North Carolina A & T University, Tuskegee Institute and Talladega College from 1965 until retiring from education in 1992. In 2001, Auburn University awarded Franklin an Honorary Doctorate of Arts degree.

“For me and all the others who followed … it’s just a great moment in the history of Auburn,” Gossom said.

Sae’Breon Stiles, president of the Harold A. Franklin Society, outlined how the goals of the society coincide with Franklin’s drive to attend Auburn despite the obvious obstacles confronting him. The HAFS was founded in 2008 with the intent to improve “retention, persistence and graduation rates of men of color enrolled at Auburn University,” Stiles said.

“Today we share a common purpose of preserving a landmark event in the university’s history,” he added. “Today is about triumph, and not ours alone, but it’s about all of those people, black and white, who helped to open wide the doors to this institution and subsequently, to the state. It is indeed a triumph over the injustice in the world today.”

With 15 percent of Auburn’s student body comprised of African-Americans today, Relihan reiterated that she hopes the marker will not only commemorate the past, but remind people that the diversification of Auburn has not reached its limit.

“I hope that it’s a reminder to everybody that passes it to be thankful and openly appreciative to those who have come before us and broadened opportunities at Auburn,” she said. “At the same time it serves as a reminder that we’ve got more to do. We need more people of color in positions of authority. We need more women and people of color in all of our disciplines, and I hope that everyone will be inspired to work toward those further goals.”

In light of the praise he has received, Franklin thanked Auburn for recognizing the “small contribution” he made to the desegregation initiative and the support of diversity in the academic arena today.

“I say small because I’m only one of the many people who’ve tried to make things right for America,” Franklin said.

As today’s students leave footsteps on the same campus that Franklin did without fear or hesitation 50 years ago, he hopes the marker, representing doors opened for many since Auburn opened its door to Franklin, inspires them to push themselves until they become what they want to be in life.

“(I want the marker to show) that I tried to do something positive so that others could come, would feel free to come and would not have to go through the problems that I did to get here and do their best,” he said. “And that’s what I always told my students. And that’s all I care about.

“(I hope) they learn something positive,” he continued. “With the history and the struggle so that we could be treated as equals in America rather than second-class citizens, and (I hope it) serves as a means for younger people in particular to say, he overcame that, they overcame that — we can do even better. That’s my dream.”

Opelika police are investigating after three people, including a 16-year-old, were shot early Saturday morning.

Auburn-area residents have a new option when it comes to a fun night out on the town.

An affluent neighborhood on Lake Martin frequented by many Lee County, Montgomery and Birmingham residents who have moved or bought second hom…

East Alabama Medical Center continues to see a decline in the number of hospitalized COVID-19 patients since Alabama’s mask mandate went into effect.

Harold A. Franklin, Bob Dumas, Constance Relihan and Sae'Breon Stiles pose in front of the historial marker for photos during the unveiling on Sept. 24.

Harold A. Franklin speaks Thursday before the unveiling of the historical marker on the green space between Ralph Brown Draughon Library and Mary Martin Hall on the Auburn University campus. The marker commemorates the 1964 desgregation of the university.