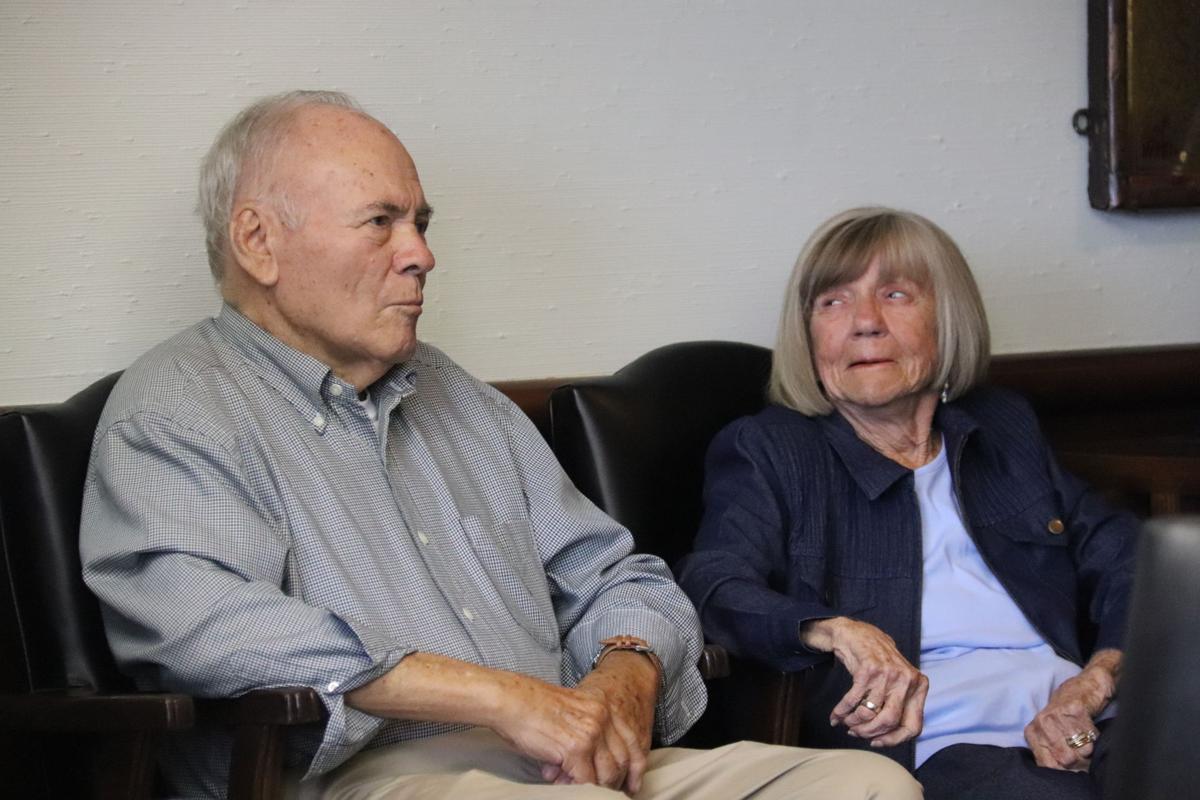 E. L. and Ruth Spencer react to the announcement about East Alabama Medical Center's new Cancer Center being named after them on July 23. PHOTO COURTESY OF JOHN ATKINSON / EAMC 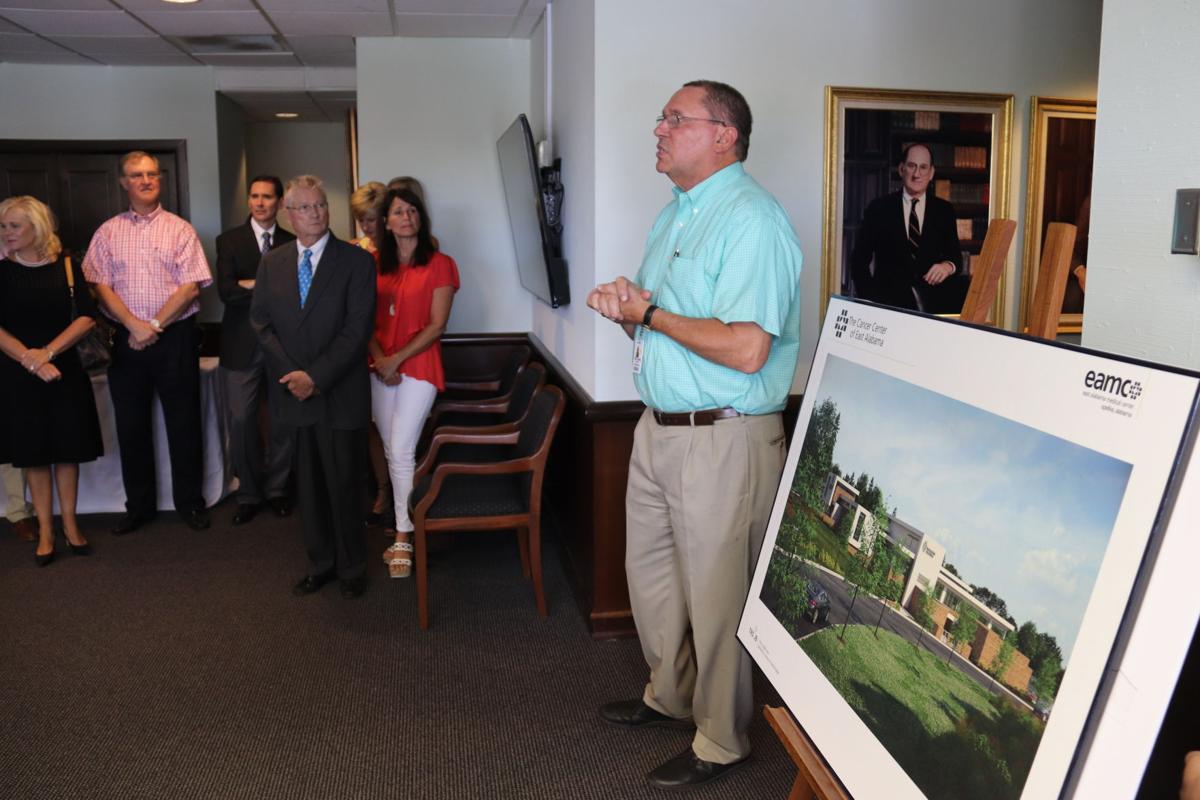 Terry Andrus, EAMC president and CEO, speaks about the new Cancer Center and the Spencers during the naming reception at AuburnBank on July 23. PHOTO COURTESY OF JOHN ATKINSON / EAMC 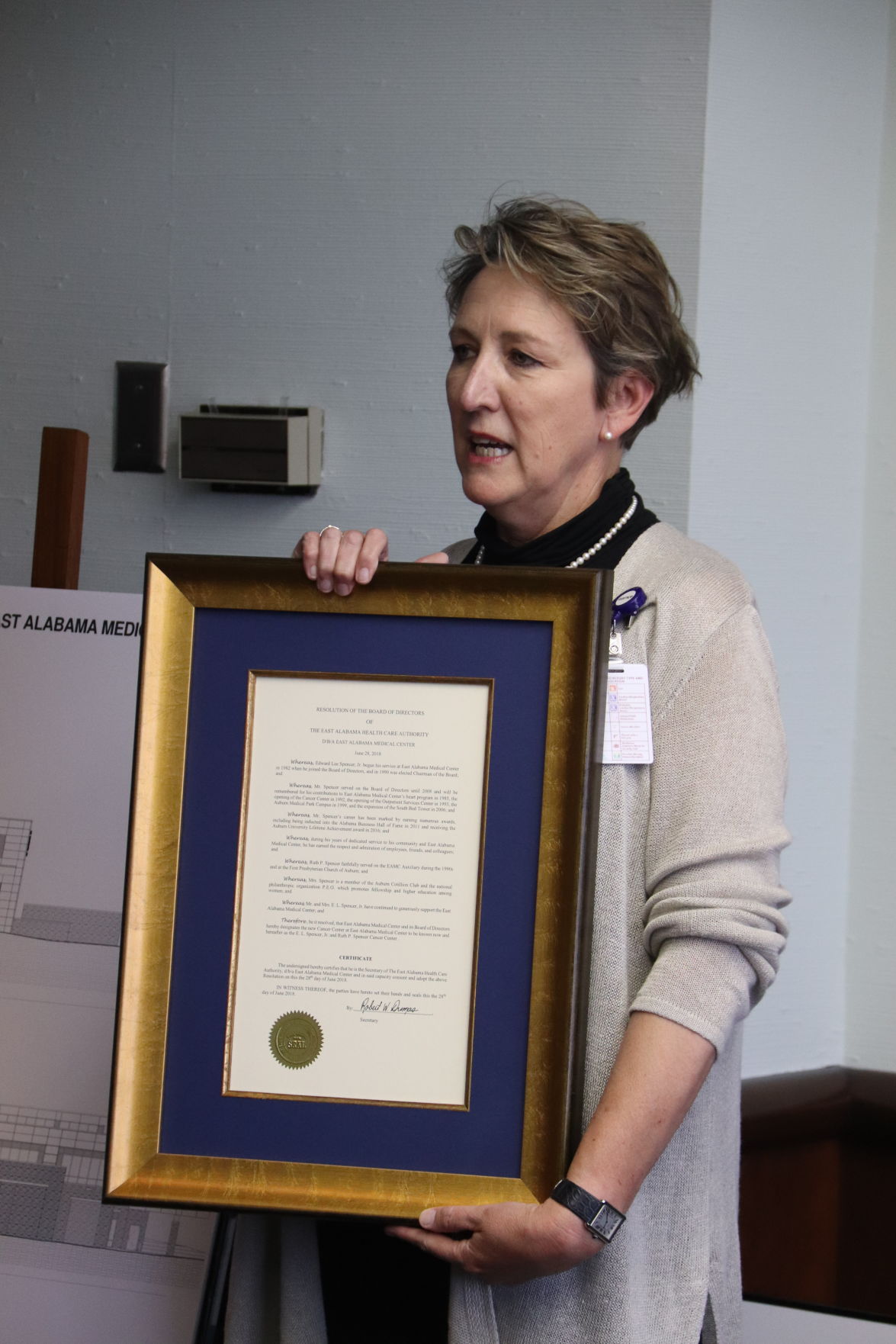 A new Cancer Center at East Alabama Medical Center being built to help preserve lives also will preserve the generosity and legacy of two of the hospital’s most devoted supporters.

Set to open in the spring of 2019, the E. L. Spencer Jr. and Ruth P. Spencer Cancer Center received its name when the EAMC board of directors authorized a resolution on June 28.

“Mr. Spencer was a longtime board member, including chairman of the board, and Mrs. Spencer is obviously his wife and has been involved very much in the community,” Terry Andrus, EAMC president and CEO, told the Opelika-Auburn News. “They made a large gift, and so we’re naming the facility in honor of them.”

In a statement to the O-A News, the Spencers, who live in Auburn, said, “EAMC has always been dedicated to healing and caring for the sick. The Cancer Center is a state-of-the-art facility that will provide the best service possible to the citizens of Lee County and surrounding area. It is an honor for us to have our names associated with this great facility.”

The Spencers were “very humbled” by the honor, Andrus said.

“When we decided to build this facility, we wanted to do a fundraising campaign because we thought the community would be interested in doing this,” Andrus said. “AuburnBank, maybe six months or so ago, made a nice donation in honor of the Spencers for the Cancer Center. And at that point, we thought, ‘Gee, maybe we could raise enough money to name the facility for them.”

The document further highlights how E. L. Spencer, the former president and CEO of Auburn National Bancorporation Inc., “will be remembered for his contributions to East Alabama Medical Medical Center’s heart program in 1985, the opening of the Cancer Center in 1992, the opening of the Outpatient Services Center in 1993, the Auburn Medical Parl Campus in 1999, and the expansion of the South Bed Tower in 2006.”

E. L. Spencer also was recognized for his induction into the Alabama Business Hall of Fame in 2011, and he was the 2016 recipient of the Auburn University Lifetime Achievement award.

His wife, Ruth, “faithfully served on the EAMC Auxiliary during the 1990s and at the First Presbyterian Church of Auburn,” the resolution states as well. Representing the Auburn Cotillion Club, Ruth Spencer also is a member of the Philanthropic Educational Organization, which supports the higher education pursuits of women.

Presenting the Spencers with the honorary resolution during a July 23 reception, Laura Grill, who will become the hospital’s president and CEO on Oct. 1, expressed gratitude on behalf of the Spencers' devotion to the community and hospital.

“We are very, very excited to name this facility for you; thank you for all you have done,” Grill said in a press release.

Construction on the Spencer Cancer Center is “going really well,” Andrus said, afterward adding, “It’s scheduled to be finished next May, and it’s right on schedule.”

The $39.7 million, two-floor facility is being constructed on 15.66 acres of land at 2501 Village Professional Drive in Opelika. Measuring approximately 60,000 square feet, it will nearly quadruple the size of the hospital’s current cancer center and annually serve approximately 15,000 patients.

The facility will feature a pharmacy and boutique, and the first and second floors will focus on radiology oncology and medical oncology, respectively.

“Cancer touches most families, and we’ve obviously had a cancer center for a number of years, but we’ve certainly outgrown it,” Andrus said. “And so I guess the first thing it’ll do is provide needed space for primarily patient care, but also for physicians and staff.”

Lee County saw its COVID-19 death toll rise by eight from Monday to Tuesday as the number of new COVID-19 cases remains steady.

Two coffee shops in the Auburn-Opelika area are temporarily closed due to COVID-19.

Auburn University faculty punt on no confidence vote for Hardgrave

E. L. and Ruth Spencer react to the announcement about East Alabama Medical Center's new Cancer Center being named after them on July 23. PHOTO COURTESY OF JOHN ATKINSON / EAMC

Terry Andrus, EAMC president and CEO, speaks about the new Cancer Center and the Spencers during the naming reception at AuburnBank on July 23. PHOTO COURTESY OF JOHN ATKINSON / EAMC