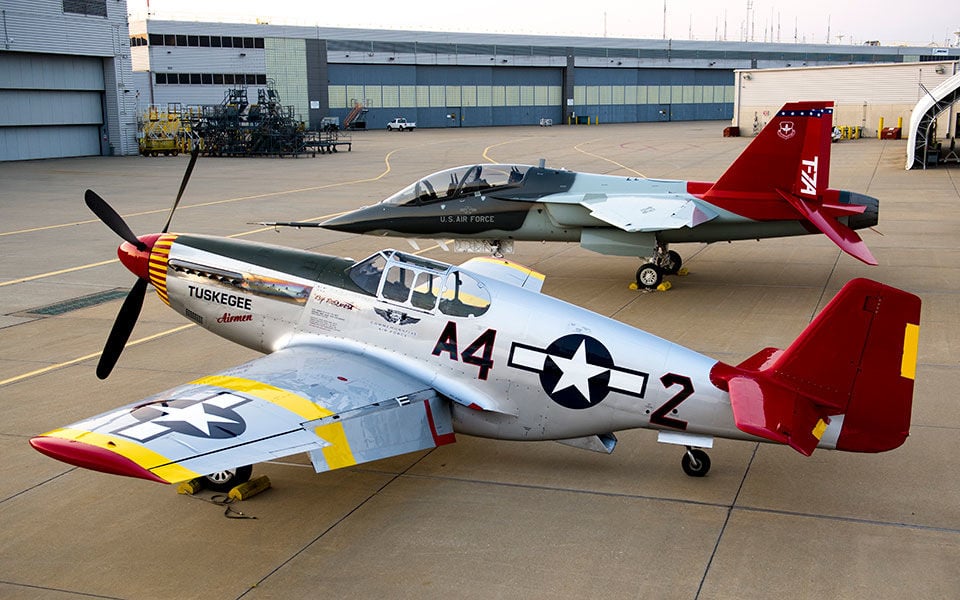 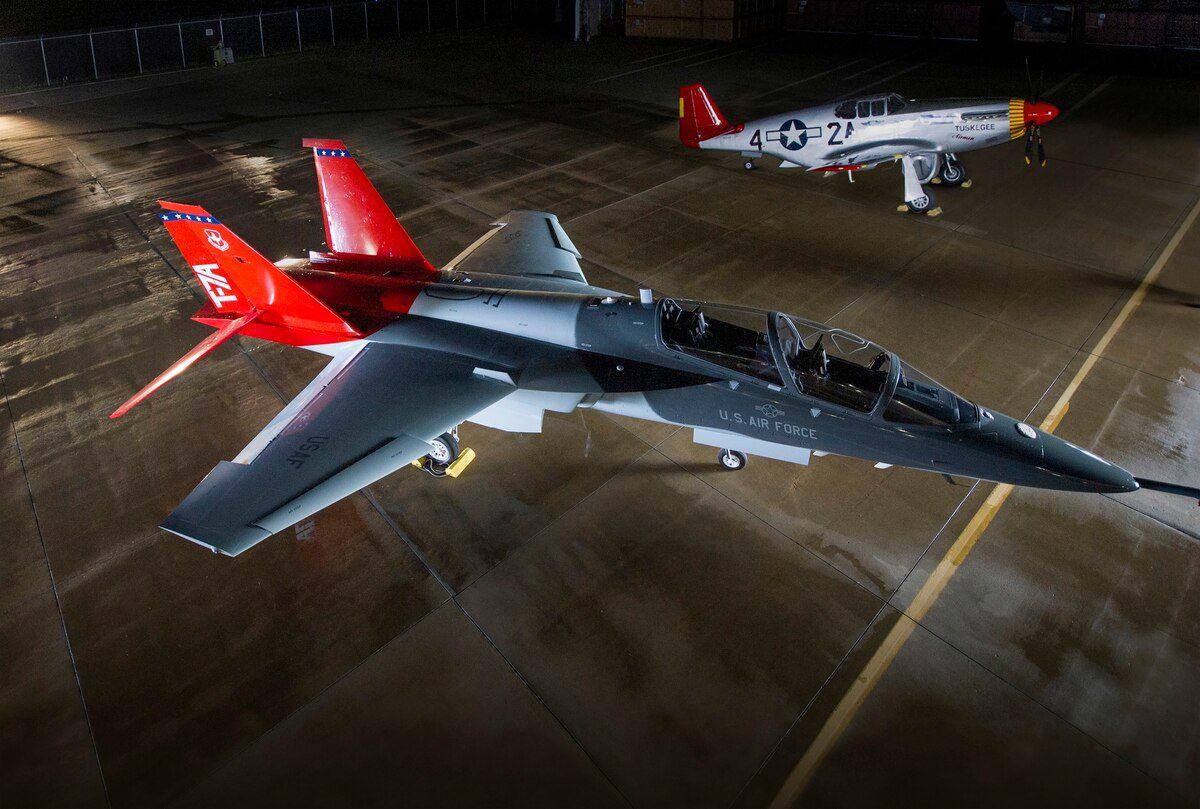 The Boeing T-7A will be the next trainer jet for the Air Force. Its red tail markings pays tribute to World War II's Tuskegee Airmen. (Boeing photo) 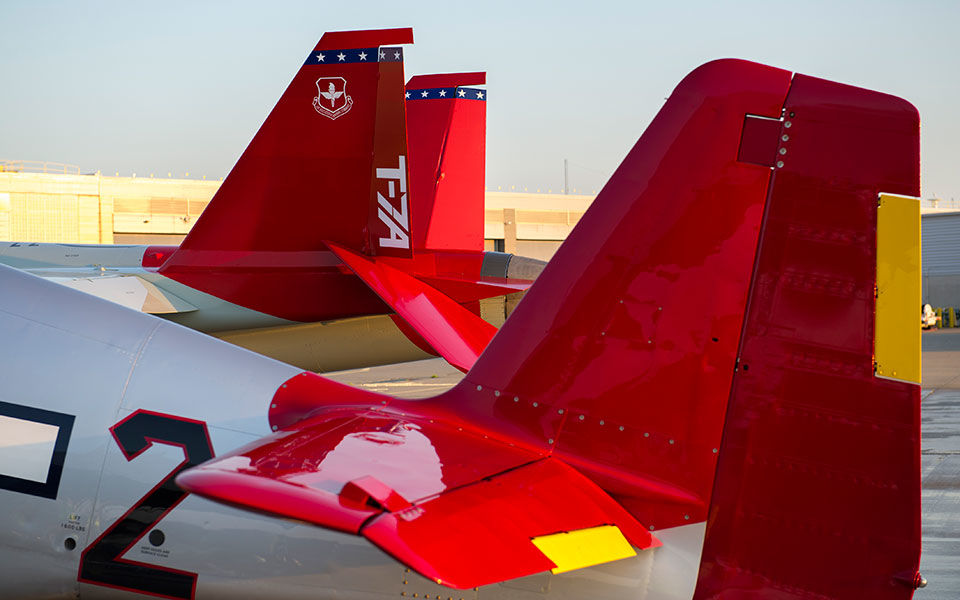 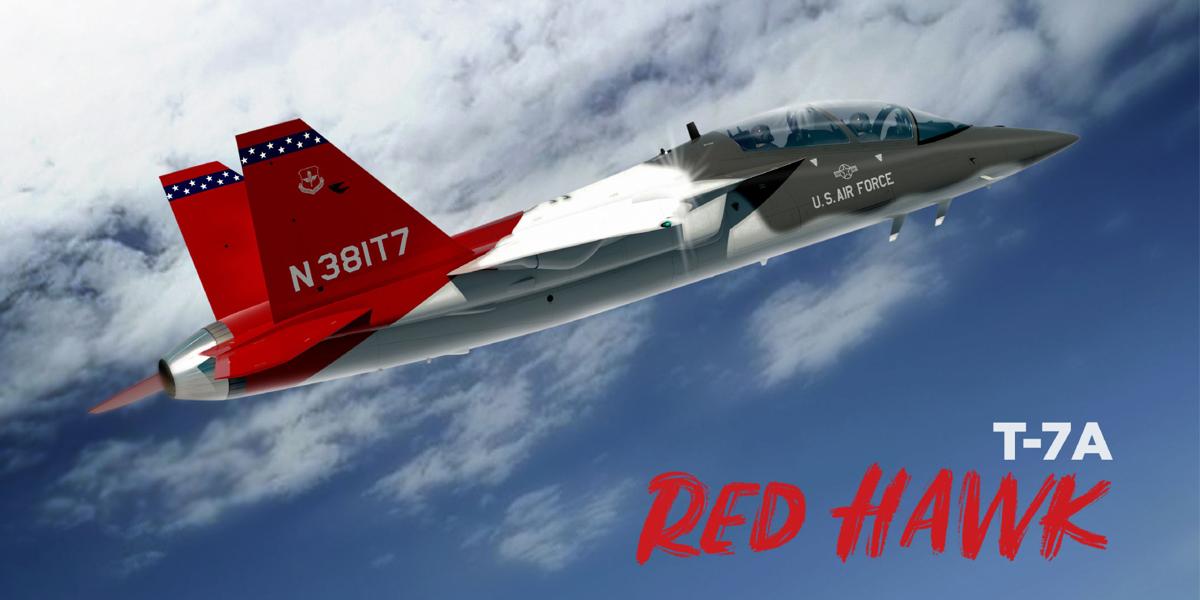 The heroic legacy of World War II’s Tuskegee Airmen will continue as an active symbol of today’s military after the Air Force this week honored the airmen with the naming of its new trainer jet.

The famed all-black Tuskegee aviators broke the racial barrier with their courage and skills, and they were known as the Red Tails because of the iconic red paint on the tail of their aircraft.

Seven decades later, the Boeing T-7A, chosen in 2018 as the next-generation trainer jet for the Air Force, will be known as the Red Hawk and carry the same red-tail markings.

Acting Secretary of the Air Force Matthew Donovan made the announcement during his speech Monday at the 2019 Air Force Association’s Air, Space and Cyber Conference in National Harbor, Maryland.

Donovan was joined on stage by one of the original Tuskegee Airmen, Charles McGee, who flew more than 400 combat missions in World War II, Korea and Vietnam. Also seated in the audience were members of the East Coast Chapter of the Tuskegee Airmen, according to Air Force press statements.

“The name Red Hawk honors the legacy of Tuskegee Airmen and pays homage to their signature red-tailed aircraft from World War II,” Donovan said. “The name is also a tribute to the Curtiss P-40 Warhawk, an American fighter aircraft that first flew in 1938 and was flown by the 99th Fighter Squadron, the U.S. Army Air Forces’ first African American fighter squadron.”

Ironically, it was another aircraft with Tuskegee ties that Boeing beat out for the Air Force contract.

Finalists Lockheed-Martin and Italian-based Leonardo also had trainer models considered by the Air Force, and had Leonardo won the contract, it had planned to locate its production facilities in Tuskegee over the same fields the World War II airmen had trained.

The T-100 project would have brought more than 750 direct jobs and hundreds more support jobs to the corridor from Opelika-Auburn to Montgomery and the surrounding area, and it would have provided a major boost to Alabama’s growing aviation industry.

Instead, the Air Force and Boeing announced that Boeing will receive a $9.2 billion contract to produce 351 T-7A Red Hawks.

“The T-7A will be the staple of a new generation of aircraft,” Donovan said. “The Red Hawk offers advanced capabilities for training tomorrow’s pilots on data links, simulated radar, smart weapons, defensive management systems, as well as synthetic training capabilities.”

The T-7A will replace Air Education and Training Command’s 57-year-old fleet of T-38C Talons. The first T-7A aircraft and simulators are scheduled to arrive at Joint Base San Antonio-Randolph, Texas, in 2023.

Other bases that eventually will transition to the new trainer include Columbus Air Force Base, Mississippi; Laughlin and Sheppard bases in Texas; and Vance in Oklahoma.

Troy Turner is editor of the Opelika-Auburn News and is the former military editor for Digital First Media in New York. He can be contacted at tturner@oanowcom and followed on Twitter @troyturnernews.

A poor farm no more, the property at Shoofly Farm offers bed-and-breakfast rooms and peace and quiet

The view from the entrance of the Auburn Bed and Breakfast at Shoofly Farm in Waverly on Highway 431 is of towering 200-year-old pine trees, l…

Auburn, Opelika and surrounding community residents wanted a Whataburger, and now they’re getting two in under a year.

East Alabama Medical Center officials are starting to think about the end game for their community vaccination clinic across from the Auburn Mall.

A new business concept is being built where Cock of the Walk once stood that will include a restaurant, a plant nursery, live music and more.

The Boeing T-7A will be the next trainer jet for the Air Force. Its red tail markings pays tribute to World War II's Tuskegee Airmen. (Boeing photo)