As an Army general and now Auburn's vice president, Ron Burgess has always bled orange and blue
0 Comments
Share this
{{featured_button_text}}
1 of 2 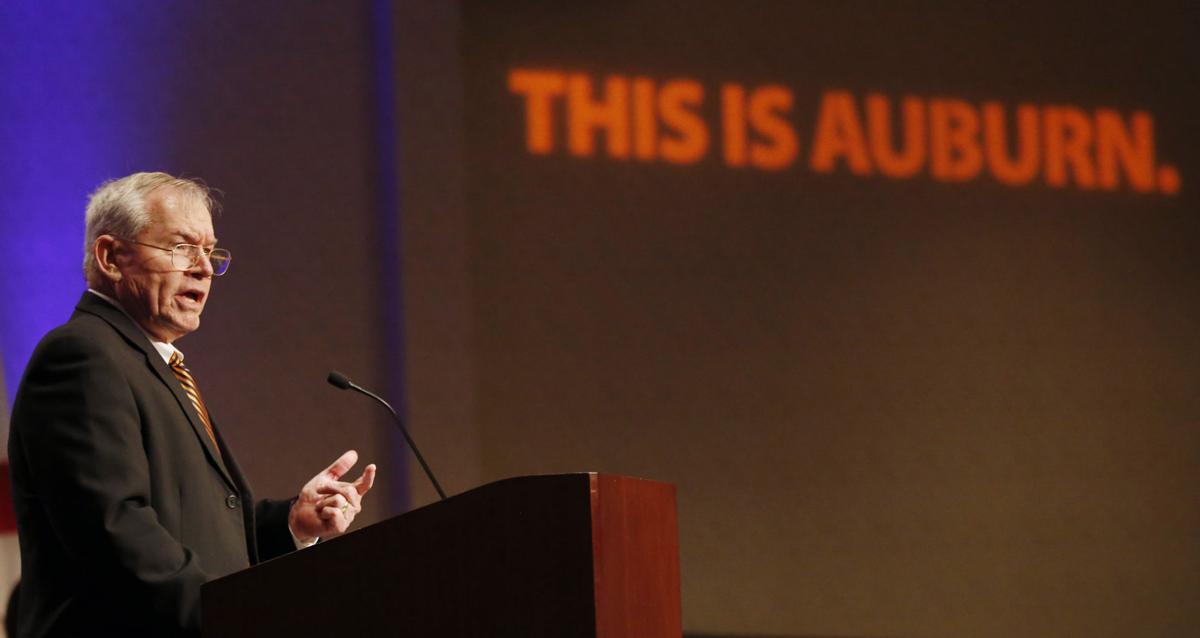 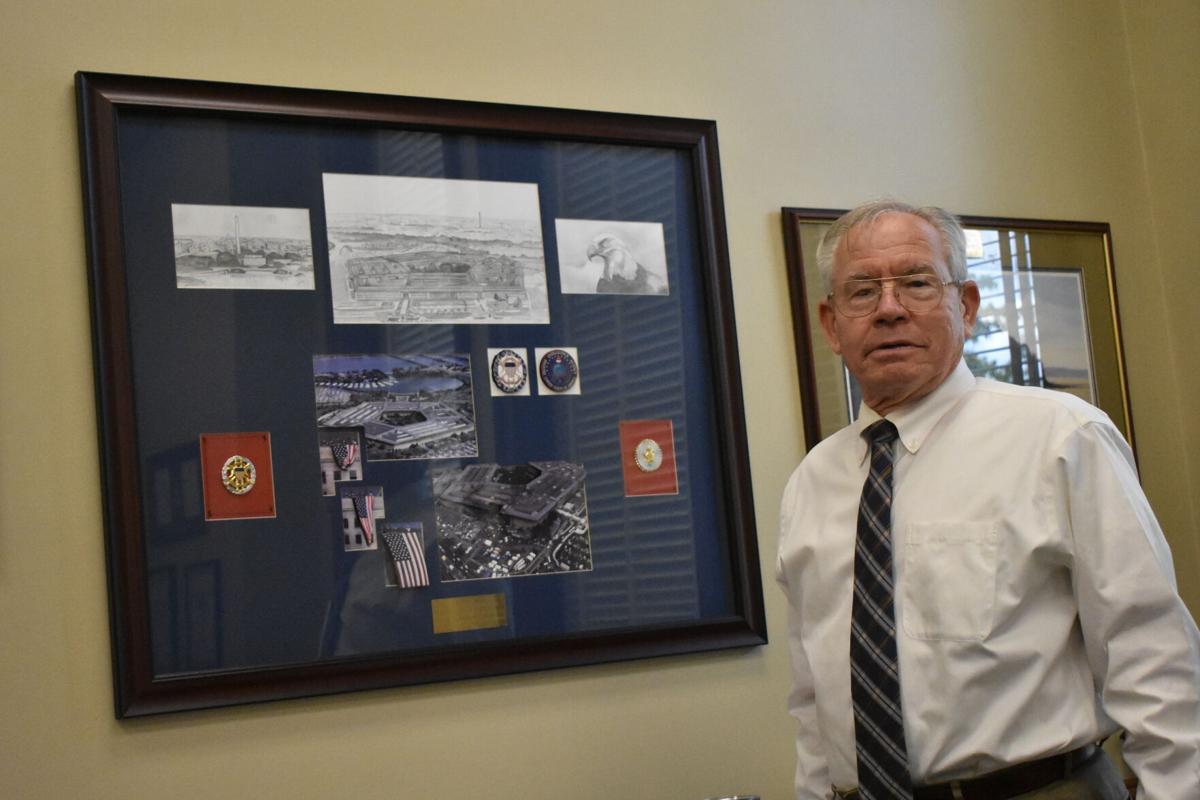 Auburn University Chief Operating Officer Ron Burgess stands in his office Friday next to framed photos of the Pentagon the day it was struck by a plane on 9/11.

A large frame hangs on the wall on the first floor of Samford Hall depicting 3-dimensional pictures of the wreckage of the Pentagon that happened the same day two planes crashed into the World Trade Center 20 years ago.

A 68-year-old man keeps it to the right of his desk and looks at it often. He thinks of that day when the United States’ seeming invulnerability was threatened for the first time in decades.

The man, Ret. Lt. Gen. Ron Burgess, worked for decades in military intelligence and became a three-star general before retiring from the U.S. Army in 2012. Years later, he took on a position as the chief operating officer of Auburn University and in 2019 added executive vice president to his job title, but that picture on his wall will always remind him of the anger he felt when his nation was attacked on 9/11 as well as the disappointment he felt in himself for not being able to prevent it.

Before he was one of the highest ranking officers in the U.S. Army or one of the highest ranking administrators on Auburn’s campus, Burgess grew up in Jacksonville, N.C., then moved to Opelika and graduated from Opelika High School. Burgess said he didn’t really plan on joining the military until a guidance counselor stopped him in the hallway at Opelika High one day..

“He said, ‘Ron, you really ought to think about putting your name in the hat for one of the ROTC scholarships,’” Burgess said. “I thought about how it would help my parents out, and I said, ‘Why not?’”

Looking for a way to pay for his higher education, he ended up applying to both an Army and an Air Force scholarship, and upon earning both, he took the Army’s offer after the Air Force informed him that his eyesight wasn’t good enough to become a pilot. From there, he enrolled at Auburn University and graduated in 1974 with a degree in political science before joining the U.S. Armed Forces.

“People will tell you throughout my military career that I bled orange and blue,” Burgess said. “There are many things about this university that I loved. The sports are a part of that, the creed always appealed to me in terms of what it stood for, and the basic mission to train and educate people appealed to me.”

While Burgess said he initially only planned to serve in the military for the required four years.

“The plan always was that I’d do my prior commitment, which was four years, and I’d get out and come back to Alabama to coach either high school football or basketball, but that’s not what the Lord had in mind for me,” Burgess said. “I stayed because of being around like-minded people that were committed to what we were doing in terms of serving the nation. … As time went on, it really became about service to the country. I don’t think that any of us who were serving on 9/11 ever gave it a second thought on whether or not we would continue to serve or not. We would continue as long as the nation needed us.”

On Sept. 11, 2001, decades after Burgess first joined the Army, he was at a worldwide intelligence conference in Fort Huachuca, Ariz. After he finished his morning run, Burgess came back to his quarters and saw the news on his television: an airplane had hit the World Trade Center. He continued watching.

“Much like everybody else, when the second plane hit the other tower, I immediately knew that it wasn’t an accident,” Burgess said. “For me, there was anger that this had happened, but there was also some professional disappointment, wondering, ‘OK, what did we miss? What didn’t we pick up on that would’ve told us an enemy was planning on doing this?’”

Burgess said the intelligence community knew pretty quickly who was responsible, and Burgess said it wasn’t the first time Osama bin Laden had appeared on their radar.

“I knew about bin Laden and knew who he was, and he had been a threat to the United States before 9/11,” Burgess said. “It was one of those seminal moments in your life where, while you were angry, you also wanted to ensure nothing like that happened again.”

In the years following that day, Burgess, like many others in intelligence, dedicated himself to working to make sure that the United States would not be attacked in the same way again, but he said he’ll never forget that day and the consequences it had.

“I am a believer in one of those old, trite sayings that those that fail to study history are doomed to repeat it,” Burgess said. “Remembering is important in understanding what happened that day, so we do our best to not let it happen again.”

While it’s been years since he retired from the Armed Forces and taken on responsibility as the COO of Auburn University, Burgess said he still keeps up to date with international developments and remembers why America is worth protecting.

“A lot of people want to say that we’re finished with what has been referred to as ‘The War on Terrorism,’ but it’s not over,” he said. “There are still people who want to do us harm. The good news is we’ve got a lot of great people in the intelligence community, in our military, our first responders and law enforcement that work hard every day to ensure that you get to do what you’re doing now and do it without any worry.

On Saturday, 20 years after the day the towers fell, Burgess did the same thing he always does on 9/11. At a little before 9 a.m. EST, when the planes hit in New York City, he paused in silence and remembered.

'People eat it every morning': Business at Byron's Smokehouse took off when they added breakfast

“The thing about breakfast is that people eat it every morning,” says Glen Gulledge. “There are some people that are here every single morning. If this was just a barbecue, they’d only come here once or twice a week.”

Construction crews broke ground on the future Publix shopping center in downtown Auburn Wednesday, according to a release from developer Danie…

There were more than 8,400 new COVID-19 cases in public schools across the state of Alabama last week with over 250 of them having been report…

Auburn University Chief Operating Officer Ron Burgess stands in his office Friday next to framed photos of the Pentagon the day it was struck by a plane on 9/11.