Subscribe
Read Today's E-Edition
Share This
Battle on all fronts: In Auburn, after Blanchard’s disappearance, fighters work to make a difference in women’s defense
0 Comments
Share this
1 of 3 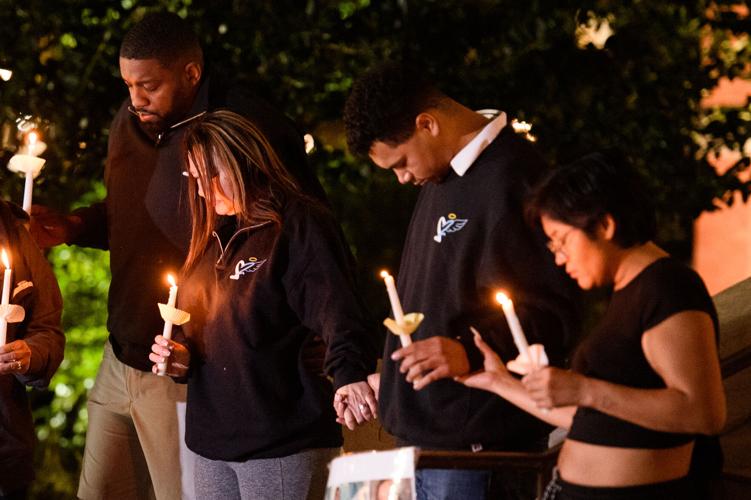 Aniah Blanchard’s family pauses for a prayer at the end of the vigil on Sunday, Oct. 23, at Auburn University. 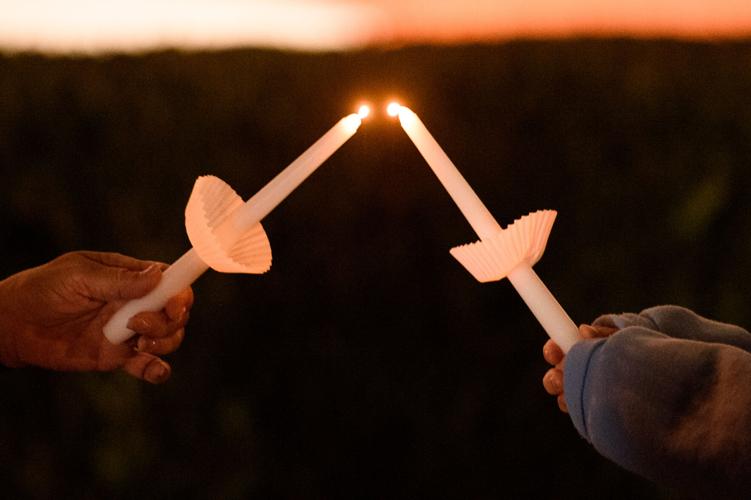 Attendees light their candles during a vigil for Aniah Blanchard on Sunday, Oct. 23 at Auburn University. 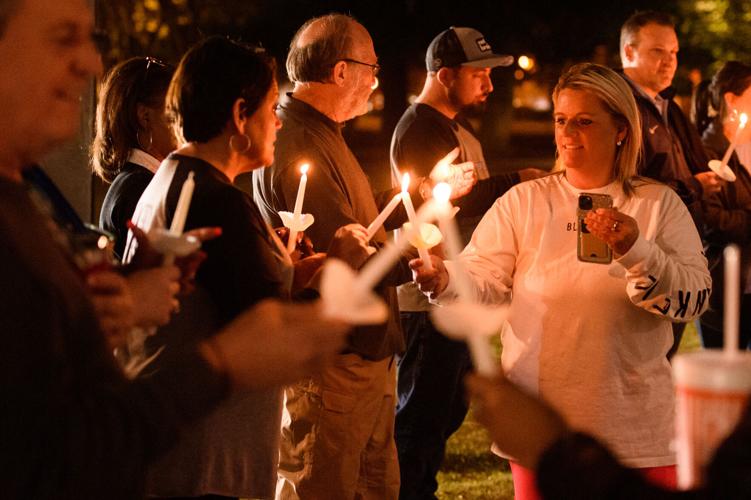 Attendees light their candles during a vigil for Aniah Blanchard on Sunday, Oct. 23, at Auburn University.

Camille Smith thought back to her time growing up on the farm and realized caring for animals is what she does best. Now, the 24-year-old works in research, tending to animals at UAB. Her friends and family have played an essential role in supporting her since the alleged attack.

“He got addicted to cocaine and started stealing my prescription medication,” Smith said of her boyfriend at the time. “When I finally said something, he beat me up. It was felony strangulation.”

Just 48 hours after the arrest, he was released on bond.

Smith is from Fort Payne and the incident took place in Birmingham, but she isn’t alone. According to the 2010 National Intimate Partner and Violence Survey by the CDC, more than one in three women have experienced some form of physical violence, rape and or stalking by an intimate partner.

“Since he committed a serious offense and got out 48 hours later, I feel like I’ve been put on the back burner, like my life doesn’t matter,” said Smith. “If I start expressing that to other people, maybe they will start spreading awareness.”

Bond release has been a hot topic in the Auburn area: Here, the disappearance of Aniah Blanchard in 2019 sent shockwaves through the city and ripples around the country. As national coverage continued, the media found a booming voice in Walt Harris – Blanchard’s stepfather, who is a professional UFC fighter, and who now uses the experience he has with hand-to-hand training to aid women’s defense classes in the Birmingham area. After his world was shaken, he looks at Auburn, an idyllic college town populated mostly by students, half of them young women, and sees a grisly flipside:

“Auburn is a hotbed for predators,” Harris said.

The outlook moving forward is just as grim, as Harris and others look over a problem with no simple solution. Harris is part of a battle on all fronts to try to help stop the unthinkable from happening to more women. There’s the women’s defense training, aimed to help women on a case-by-case basis, incident by incident, and then there are the sweeping political movements: Tying the name “Aniah’s Law” to Amendment One on the Nov. 8 election ballot, Harris, the rest of the Blanchard family, and politicians from across Alabama campaigned to pass an amendment which allows judges to deny bail to suspects charged with more violent crimes.

Harris stood on Auburn soil again in October during a vigil on Samford Lawn remembering the third anniversary of Blanchard’s disappearance.

“Here, it’s so easy to get enamored by what’s going on. Because there is so much going on, we go into a false sense of security,” he said.

According to the 2021 National Crime and Information Center’s Missing Person and Unidentified Person Statistics, 10,833 women between 18 and 20 years old are currently reported missing in the United States.

In 2008, Lauren Burk, an 18-year-old freshman at Auburn University, was abducted on her walk from her boyfriend’s on-campus dorm to her car at 8 p.m. the night of March 4. Courtney Lockhart, a former U.S. military veteran who had been dishonorably discharged, was found by investigators to have forced Burk into his car as he held her at gunpoint. After driving for 30 minutes, Burk escaped from the moving vehicle and was shot in the lung by Lockhart. She was later pronounced dead at the hospital that evening.

Lockhart is on death row, but Smith’s alleged assailant is out on bond now. With the investigation ongoing, her only protection from this is a restraining order she obtained. Blanchard’s alleged attacker, Ibraheem Yazeed, was found to have been arrested on charges of violent crimes in Montgomery and was out on bond at the time of Blanchard’s disappearance, leading proponents of “Aniah’s Law” like Auburn mayor Ron Anders to say that Blanchard’s death was preventable.

Some campaigns come to fruition, and others don’t. Aniah’s Law passed overwhelmingly with 80-percent of the state voting “yes” on the Nov. 8 ballot. In Lee County, the location of Blanchard’s disappearance, that number ballooned to around 85-percent. The Burk family’s efforts to re-establish a campus police force have yet to come to pass, though. There remains no simple solution.

‘Knowledge is the key’

Harris, who has had a long career in UFC fighting to a 13-10-1 record at the highest level of mixed martial arts, contributes with what he knows best—helping to offer women’s defense and safety courses.

Angela Harris, Blanchard’s mom, hosts the first portion of the class, a lecture-style presentation that teaches women how to be aware of their surroundings.

The second half of the class, self-defense, is taught by Harris and Blanchard’s brother Elijah Blanchard.

The offering is growing with the support of the community. They’ve recently been donated a body suit to enhance training.

“With the addition of the full body suit that was recently donated for the class, I want the women to really experience what the feeling of being in flight-or-flight feels like and not be afraid to really hit me,” said Harris.

The public 12-hour, two-day course has a similar structure style as the course taught by Blanchard’s family and includes a lecture and self-defense training.

“We teach you how to use your original weapons, your knees, hands and feet. Then, you go up against what we call our Redman in simulation to test the skills you’ve just learned,” said Pamela Revels, Lee County Sheriff’s Office Sergeant.

Other tips Revels gives women are always to let people know where they are going, listen to their instincts and not constantly look down at their phone.

A common ruse used to lure women out of their vehicles is attaching something like a poster where the woman would have to get out and remove it.

“If something is hindering your view and you cannot drive without removing it, you want to be very aware of what is going on,” said Revels. “I would shut the car door so that no one could push you back in, make sure you step out and give yourself plenty of space and when you remove it, keep your field of vision open.”

Investigators alleged that Blanchard was forced into her car against her will by Yazeed, the man that was charged with her kidnapping and murder.

“I learned a lot about things I didn’t know before (Blanchard’s death). Knowledge is the key to staying safe,” said Harris. “Bigger than anything: Know your surroundings.”

“People going to and from Auburn are more cautious since Aniah’s death,” said Smith. “Self-defense classes might help with more confidence and awareness.”

According to Revels, women ranging from 13 to 93 years old have taken the Rape Aggression Defense course.

While Smith thinks everyone should learn self-defense, she questions why she feels that women have to go the extra mile to stay safe around men. “I really wish there were classes on how to treat women like humans instead of women having to take responsibility for the actions of men. Men have made women fearful.”

The primary witness to Blanchard’s abduction initially did not come forward. It was days after that the individual filed a report to the Auburn Police Division that then accelerated the investigation according to a WSFA article.

“You shouldn’t be naïve of people’s intentions,” said Smith. “There’s still some good in the world, but there is still a lot of evil and we have to be very cautious.”

The Flying Biscuit Café is opening Monday, Dec. 12, at 7 a.m. in Tiger Town, next to Party City and World Market.

The Valley Police Department says a 23-year-old was found unresponsive at 12:30 a.m. Sunday morning after police were sent to the area on a sh…

Opelika police arrested Anthony Durrell Ashford, 44, of Opelika on Sunday in connection to the murder of Montavian Demond Collier, 37, of Opelika.

Opelika police are searching for Anthony Durrell Ashford, 44, of Opelika in connection to a murder they say occurred on Saturday in the 1000 block of York Avenue.

The toy drive is another way the motorcycle club can carry on the name of fallen Auburn police officer William Buechner, who died in the line of duty in 2019.

East Alabama Health is rolling out this weekend as Opelika’s Neighborhood Mobile Wellness Bus opens to the public in the Carver neighborhood.

The new building will be located behind the Jan Dempsey Center with access from Drake Avenue.

A local farm is aiming to plant an integrated medical marijuana facility in Lee County, despite hesitation from the Lee County Commission.

DR Congo says more than 270 killed in massacre by rebels

DR Congo says more than 270 killed in massacre by rebels

Aniah Blanchard’s family pauses for a prayer at the end of the vigil on Sunday, Oct. 23, at Auburn University.

Attendees light their candles during a vigil for Aniah Blanchard on Sunday, Oct. 23 at Auburn University.

Attendees light their candles during a vigil for Aniah Blanchard on Sunday, Oct. 23, at Auburn University.