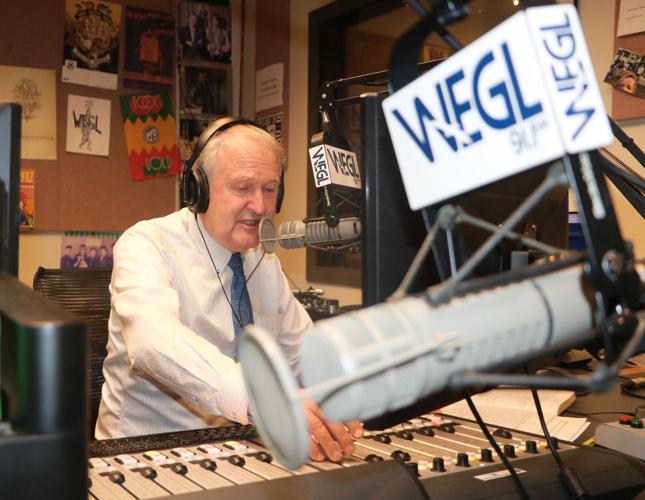 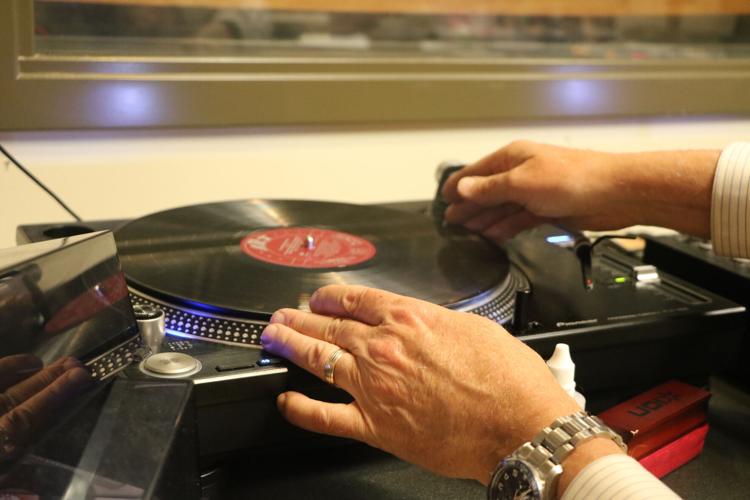 Tim Dodge putting vinyl on the record player for his show, “Golden Oldies,” on WEGL 91.1 FM

Tim Dodge has a Ph.D. in history, but he’s best known in Auburn as “Dr. Hepcat.”

On Tuesday night, Dodge hosts the “Golden Oldies” radio program on WEGL 91.1, Auburn University’s station. Spinning including a lot of blues, gospel, country and calypso, he takes requests from listeners and the obituaries of musicians long gone.

The show airs from 7-9 p.m., and those living out of the Auburn area can tune in online at www.weglfm.com

Dodge, 65, is an AU librarian and researcher who’s been hosting the show for nearly 25 years. He said his love for older music dates to his early childhood.

“When I was a kid, I had an old soul,” said Dodge, a native of New Hampshire. “My classmates liked what was hot at the time, like the Beatles and Jimi Hendrix, but it did not appeal to me. I preferred music from the 1950s. When I first discovered that music, I thought, Wow, this is the stuff I like.’ It just sounded so darn good.”

And as he got older, he realized he wanted to be behind turntables playing older music for a broad audience.

While attending Swarthmore College in Philadelphia as a history major, he joined the school’s radio station. After graduating, he took a job at Barry College in Miami and hosted a blues show for the campus station before moving back to New Hampshire.

Despite his experience in radio, Dodge never took a full-time job in it because he only wanted to play the music he was interested in. He kept playing older music just for fun.

In July 1992, he headed south with his wife, Karen, to take a job at Auburn University. Naturally, Dodge asked if he could host a show on WEGL, but university policy at the time required radio hosts to be students.

Disappointed, Dodge thought his “days on the radio were over.” Then Peter Branum, the host of “Golden Oldies” and a doctoral student, invited him on the show as a guest.

Later, Branum informed Dodge that he was leaving Golden Oldies to host a folk music show, and that the policy had changed about student-only hosts. Would he like to be the new host of Golden Oldies?

That was 1998. “It was my time,” Dodge said. “I had been gone from the radio for so long, and I even questioned if I still had ‘it’ when it came to playing records. But I was back and better than ever.”

“I love this show’s programming, probably because it reminds me of my father,” said Kelly Weigand, 48, a librarian at Auburn. “We often play cards with my mother and husband, and when he’s in charge of the music, it is always something from that era.”

Dave Gamble, a listener in Virginia, said he carves out time every Tuesday to listen to the show and get his fix of Fats Domino, Frank Sinatra and Frankie Lymon and the Teenagers.

“Every time I tune in, it takes me back to my childhood, the naïve time and fun times back in the ‘50s,” said Gamble, whose grandfather gave him a phonograph and records when he was 5 years old. “I would listen to those songs when I was with my parents, and I remember those artists performing those songs on ‘American Band Stand’ and ‘The Dick Clark Show.’ They are oldies but goodies.”

Dodge is also winning over a new generation of fans.

“When I am listening to the show, it feels like I am sitting in the past even though I am in the present,” said J.P. Williams, 22, a senior at Auburn. “It the music that my grandparents always talk about listening to. When you listen to music like that, you can’t help but to be in a good mood.”

Gamble agrees. He praises “Dr. Hepcat’s knowledge about the music industry” and says each week’s show sticks with him.

“I can hear the classic tunes in my head for the rest of the week,” Gamble said.

Dodge said he plans to host the show for at least another five years and then retire on July 15, his official starting date as a university employee.

In the meantime, he’ll keep on playing the music that’s near and dear to his heart.

“Music from those days is disappearing, and I want to keep it alive and expose it to the world while I have the chance,” Dodge said. “Many people who created it are dying, and some people have never heard of it, and you do not hear it regularly on commercial stations.

“Oldies but Goodies” on WEGL

Paleontologists accidentally discover the first brain ever known to have evolved

Paleontologists accidentally discover the first brain ever known to have evolved

Tim Dodge putting vinyl on the record player for his show, “Golden Oldies,” on WEGL 91.1 FM