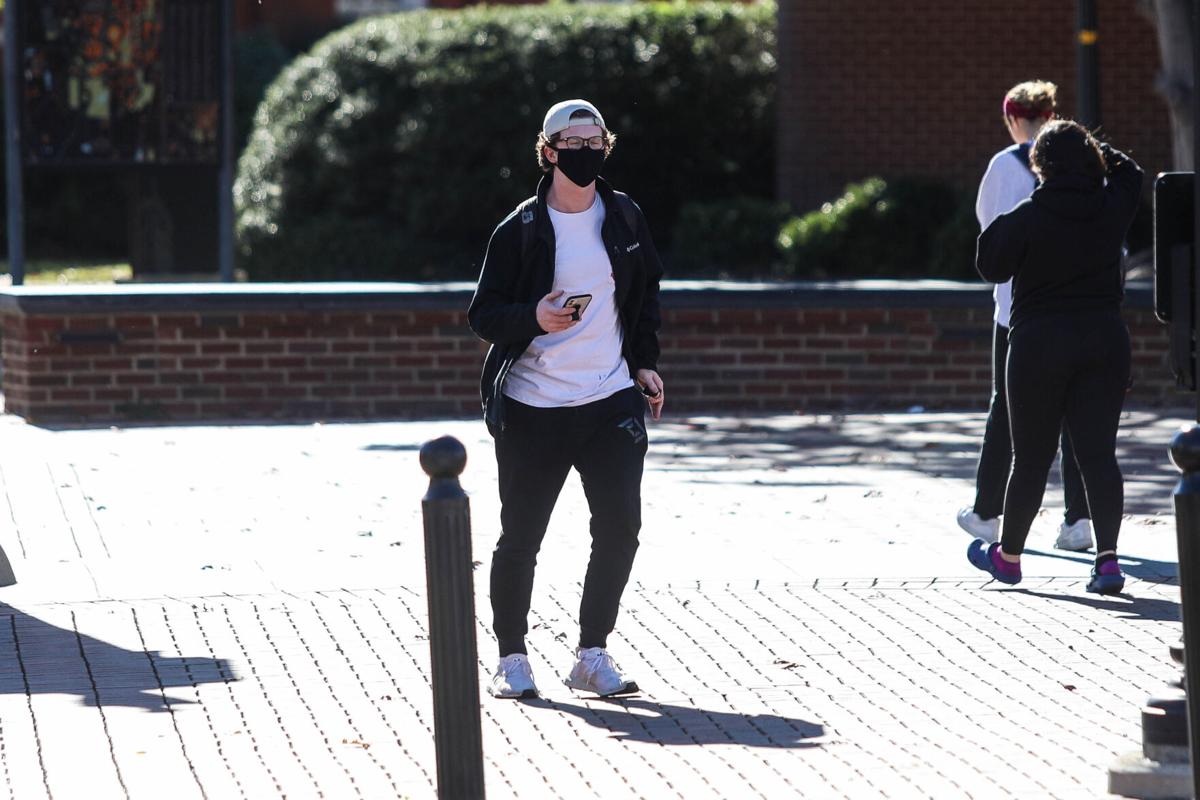 A man wears a masks on Auburn's campus on Tuesday afternoon. 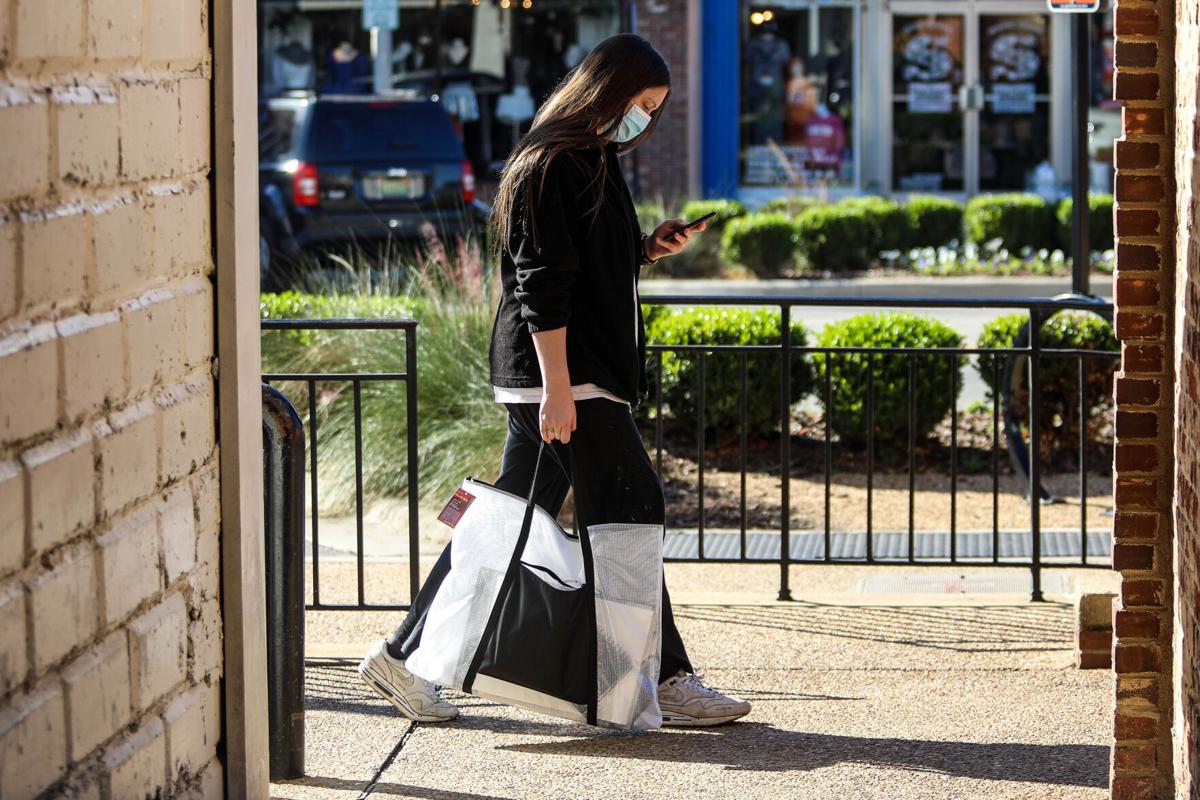 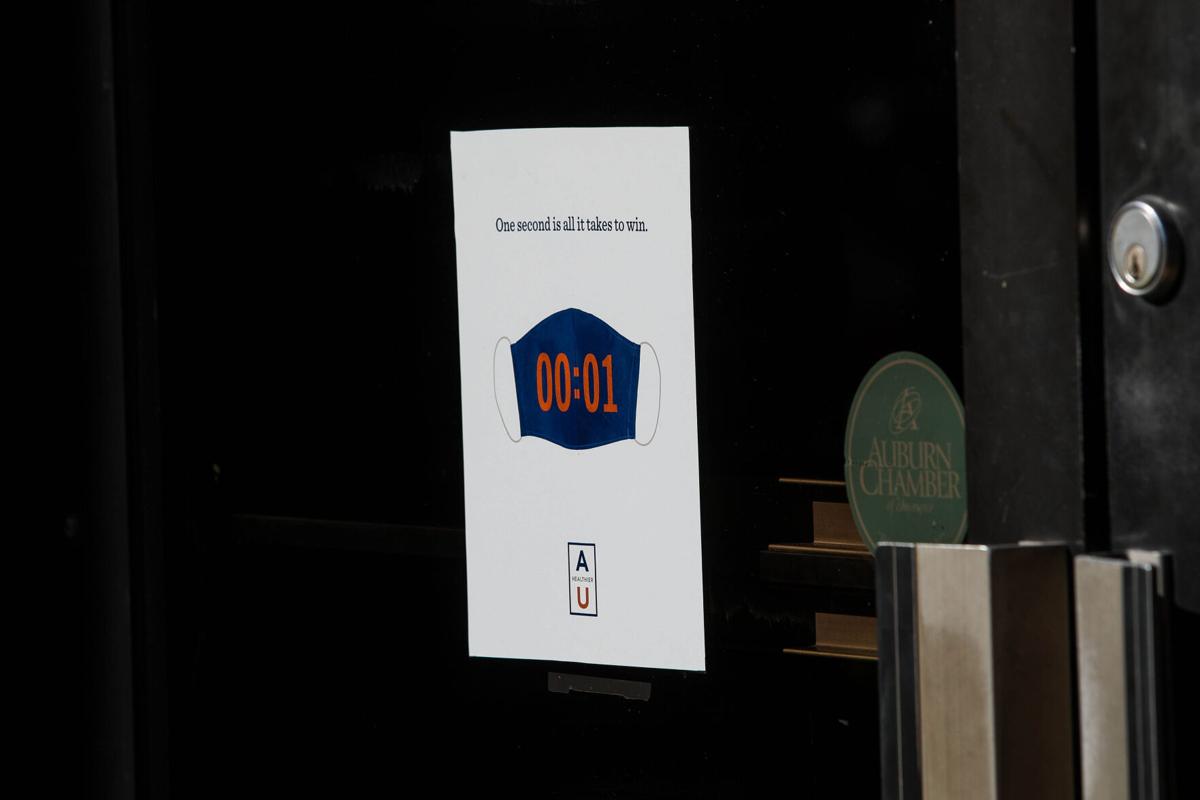 A sign is posted outside the Auburn DraftHouse on Tuesday encouraging patrons to wear masks. 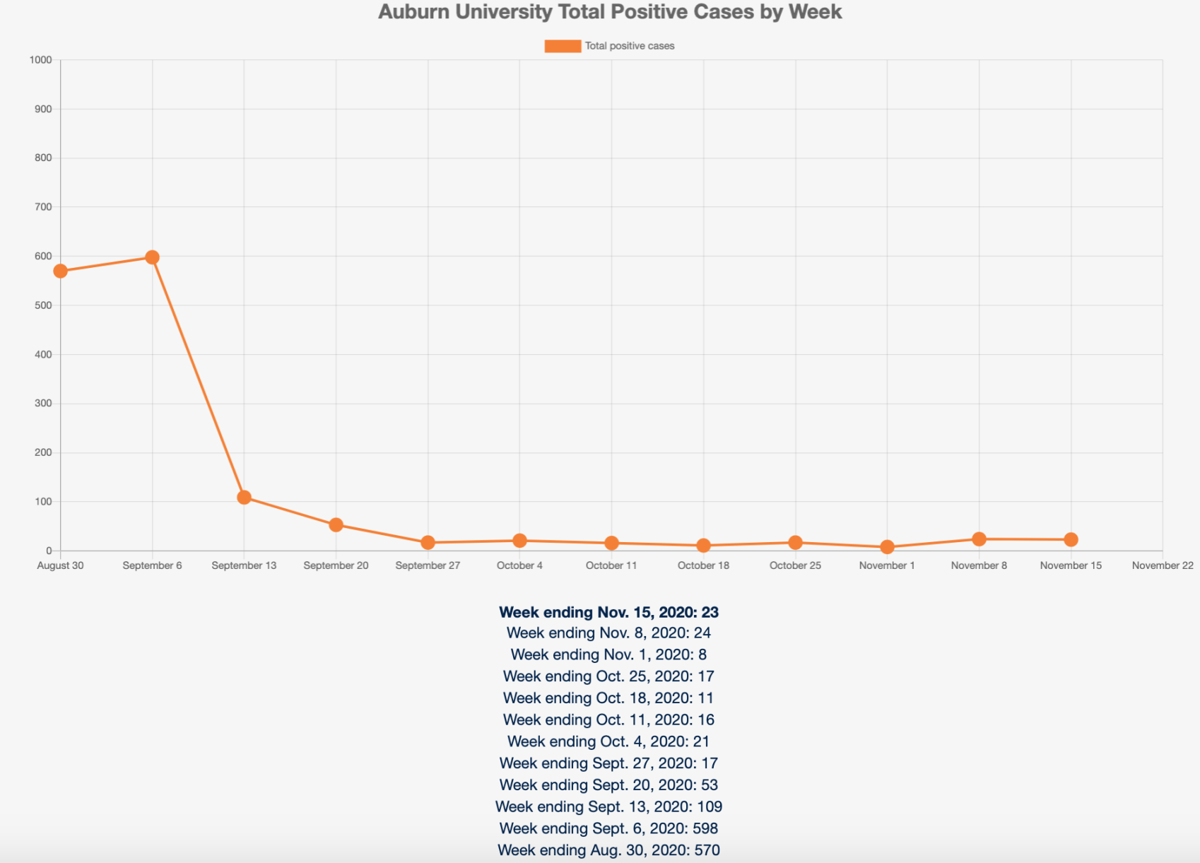 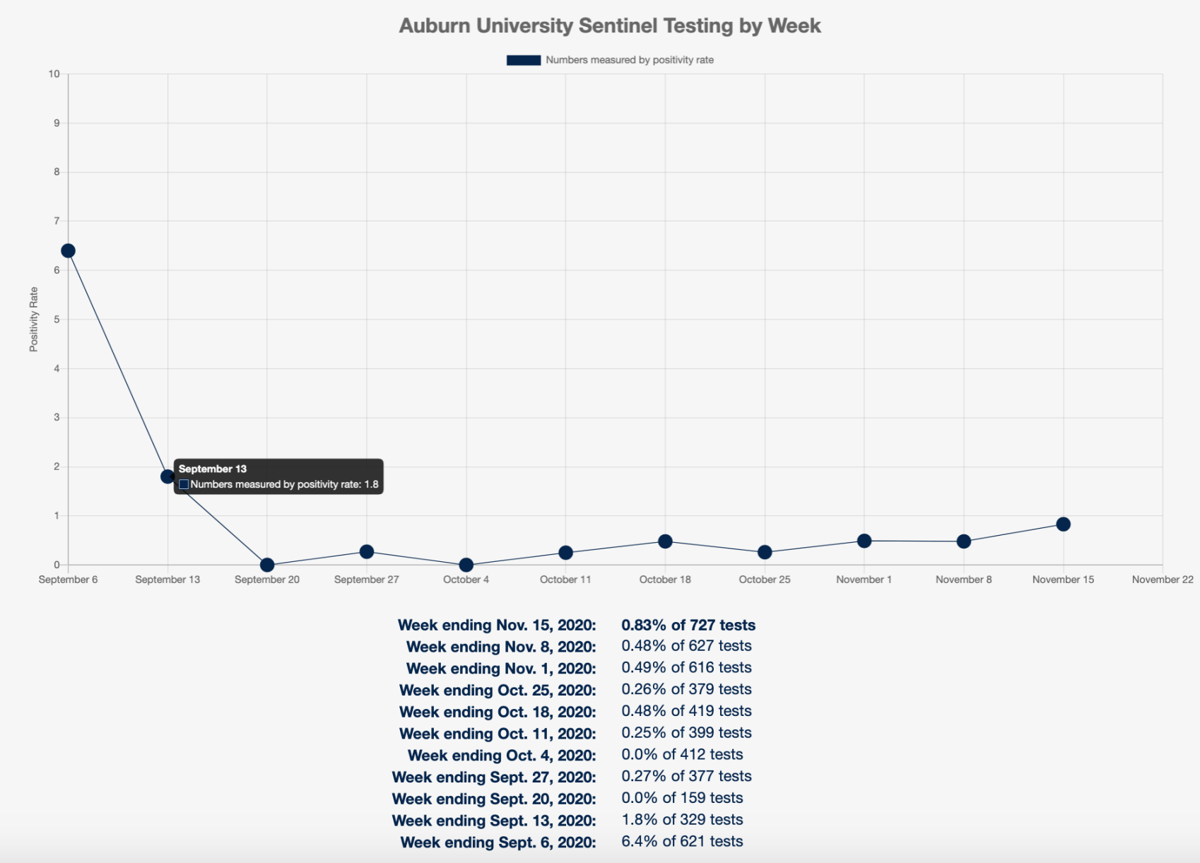 Auburn University released this graphic Tuesday showing the total positivity rate of those who tested for COVID-19 through the school's sentinel testing program. 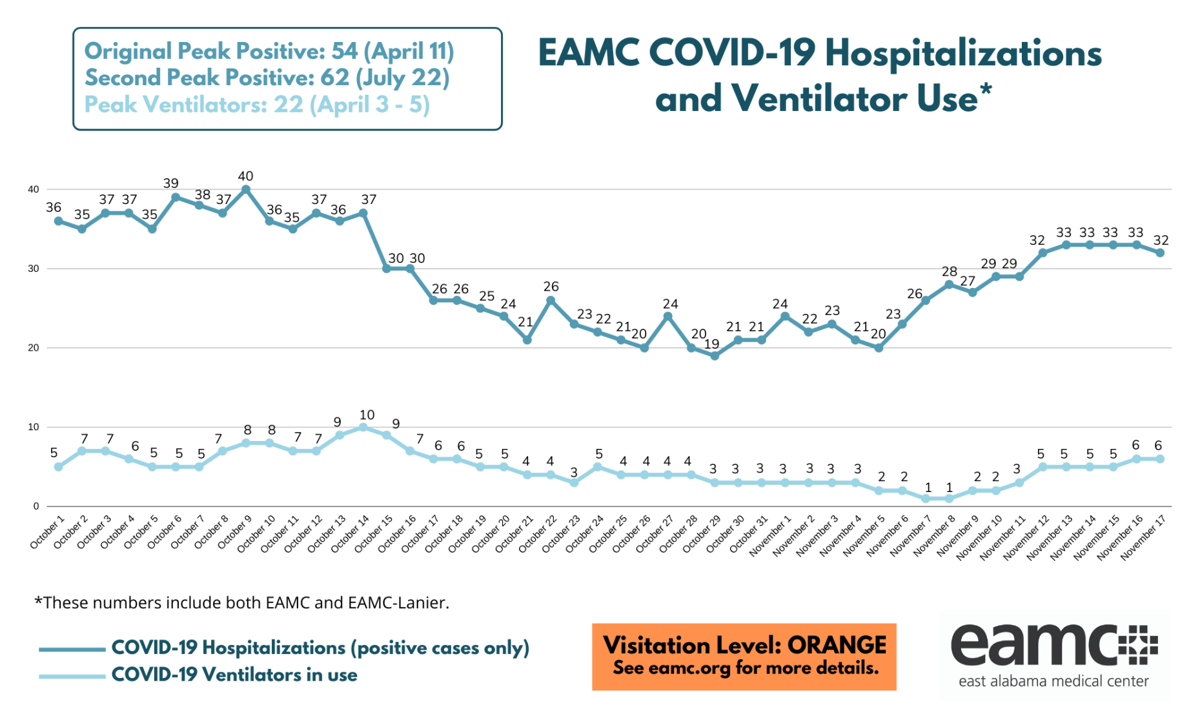 COVID-19 hospitalizations remained steady at East Alabama Medical Center during the weekend, however, hospital officials expect to see a rise in patients in the coming days.

“With the continued increase of new cases in the area, we’d expect that hospitalizations will increase as well in the coming days, just as it has done during previous community case increases,” John Atkinson, EAMC spokesman, said. “Hospitals nationwide are expressing concern over their current number of hospitalized patients with COVID-19 and the major holidays approaching.”

Lee County saw 157 new COVID-19 cases from Friday to Monday, according to the Alabama Department of Public Health (ADPH). There were 4,599 confirmed cases and 2,679 probable cases in the county for a combined total of 7,278 virus cases on Tuesday.

Lee County’s average number of new COVID-19 cases reported per day during the past two weeks also rose from about 33.1 cases on Friday to about 38.3 cases on Tuesday, according to ADPH data.

EAMC also saw its COVID-19 testing positivity rate rise last week. The hospital system tested 365 people through it 334-528-SICK hotline, of which 46 were positive for the virus. The positivity rate was 12.6 percent, up from the previous week’s positivity rate of 10.5 percent, according to hospital data.

The university said that 23 new virus cases were self-reported to the school during the week ending on Nov. 15, one less case than the previous week’s total. The school also reported a 0.83 percent positivity rate among those tested through its voluntary sentinel testing, according to data released Tuesday afternoon.

Of the 23 virus cases, 22 were reported on Auburn’s main campus and one was reported at Auburn’s Montgomery Pharmacy campus. There have been 1,467 reported COVID-19 cases since Aug. 17, according to Auburn University data.

The university said 24 campus community members self-reported positive COVID-19 tests during the week ending on Nov. 8. It also reported a 0.48 percent positivity rate during the same timeframe among those tested through sentinel testing.

Auburn University tested 727 people through the sentinel testing program last week, the highest total tested in a week. A total of 5,065 Auburn students, faculty and staff have been tested through the program since it began.

Data provided Tuesday represents students, employees and contractors who self-reported positive test results to Auburn University and those who tested positive through the AU GuideSafe Sentinel testing, according to the school's COVID-19 data dashboard.

Auburn University announced Monday that it is making operational changes in response to the rise of COVID-19 in the Lee County community, Alabama and throughout the country.

The changes remain in effect through Monday, Jan. 4.

The number of new COVID-19 cases reported by Alabama school systems to the ADPH and the Alabama State Department of Education rose by more than 500 cases last week. Many local counties also saw a rise in cases.

Macon County did not report any information to the department of education.

A total of 1,592 cases were reported to ADPH and the department of education last week, up from the previous week’s total of 1,056 cases.

Many east Alabama counties saw a significant rise in new COVID-19 cases reported during the weekend, according to ADPH.

ADPH reported 50 new virus cases in Chambers County, 14 in Macon County, 42 in Russell County and 53 in Tallapoosa County from Friday to Monday.

The average number of COVID-19 cases reported in the past two weeks continued to rise in every east Alabama county during the weekend, a trend that began in late October. Chambers County’s average rose from about 11.9 cases on Friday to about 12.1 on Tuesday, according to ADPH data.

Macon County was the only east Alabama county to see its average drop. The county’s average slightly dropped from about 6.9 on Friday to about 6.4 on Tuesday.

The following is a look at the total number of confirmed cases, probable cases and combined total cases for east Alabama counties:

There were 3,040 confirmed deaths and 261 probable deaths in the state as well, according to ADPH.

Coronavirus is hitting many east Alabama counties a bit harder each day. The region had its COVID-19 death toll rise midweek, as the number of…

Community asked to flatten the curve as COVID-19 cases, hospitalizations rise ahead of expected Thanksgiving surge

COVID-19 continued to spread at a high rate during the holiday weekend with the number of new cases soaring in east Alabama counties, and Tues…

I-85 backed up due to several car accidents

Two years ago, Auburn resident Marlye Lee was planning her wedding and was disappointed that there wasn’t a bridal shop in town.

A line formed in front of the entrance to the large blue building next to Lowe’s as sign spinners, American flag banners and balloons welcomed…

A man wears a masks on Auburn's campus on Tuesday afternoon.

A sign is posted outside the Auburn DraftHouse on Tuesday encouraging patrons to wear masks.

Auburn University released this graphic Tuesday showing the total positivity rate of those who tested for COVID-19 through the school's sentinel testing program.