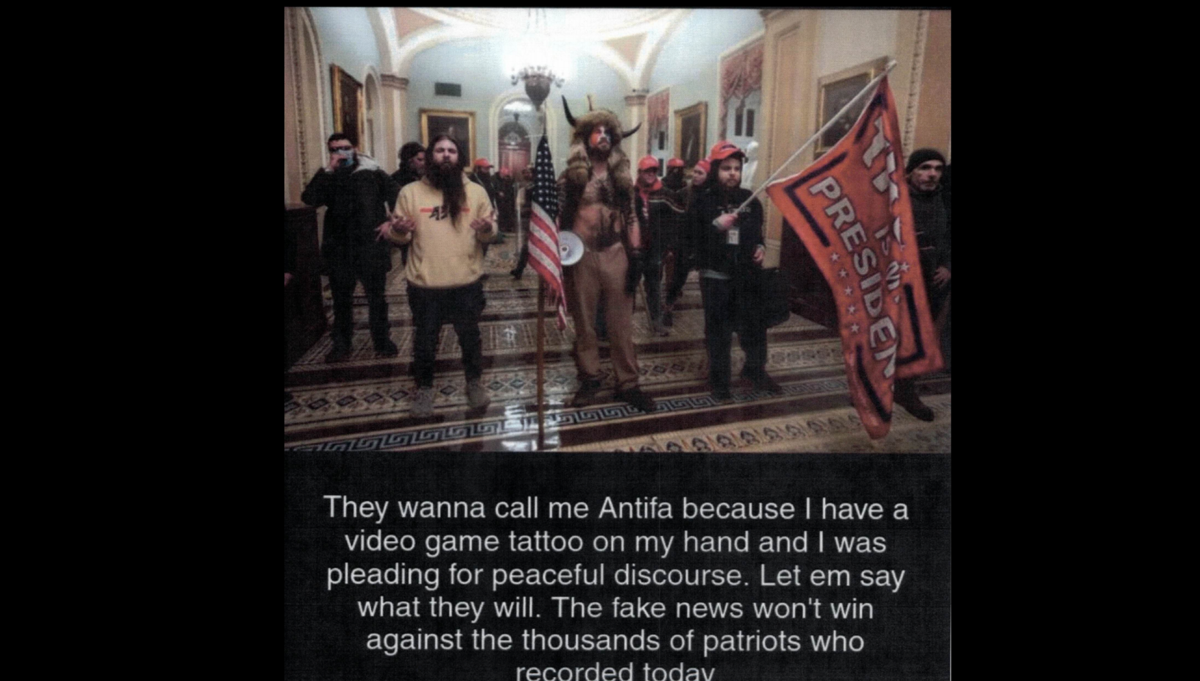 A scan of a social media post William Watson made presented as an exhibit in a motion to revoke his bond Monday. 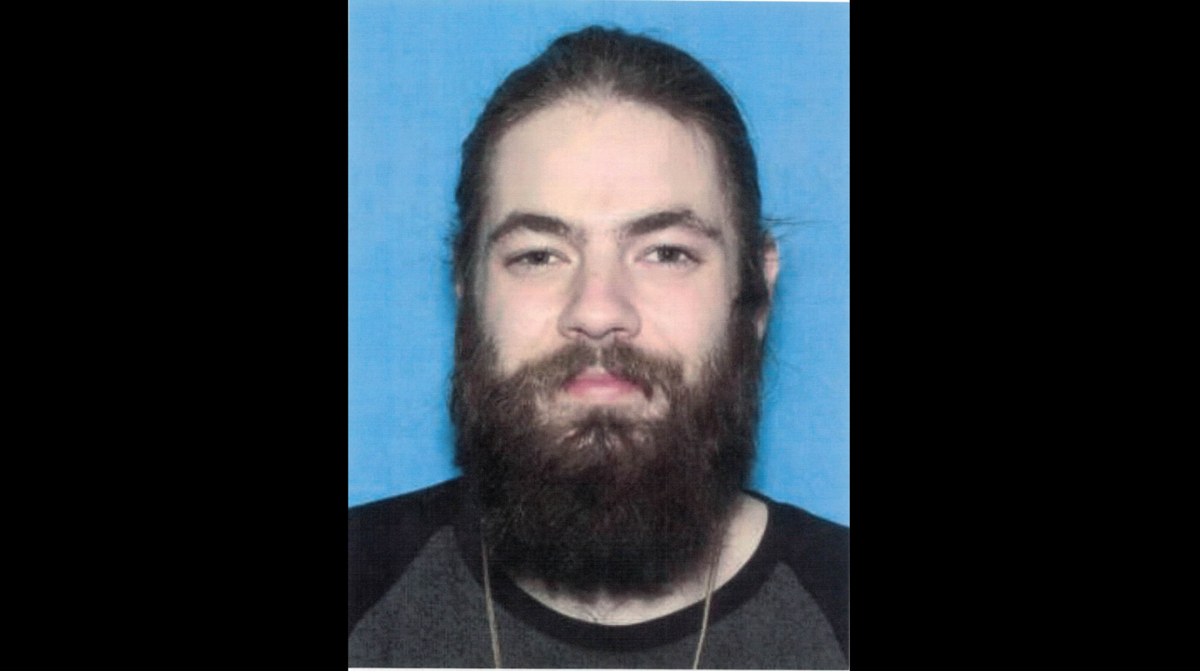 A mugshot of William Watson presented as an exhibit in a motion to revoke his bond. 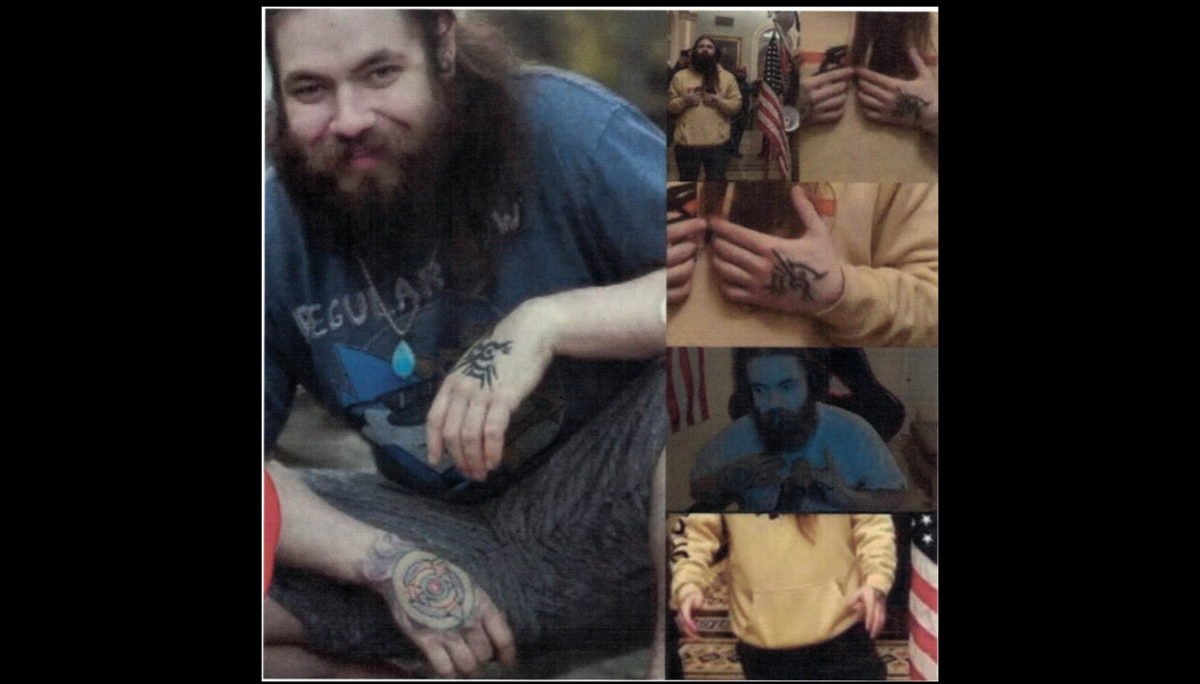 A compilation of photos of William Watson from his social media and pictures taken at the Capitol Jan. 6 presented as an exhibit in a motion to revoke his bond on Monday.

An Auburn man who took part in the violent riot in the U.S. Capitol last week said he was not a member of Antifa, contradicting claims by some conservative leaders in the state.

“They wanna call me Antifa because I have a videogame tattoo on my hand and I was pleading for peaceful discourse,” Will Watson said in a Snapchat post saved by local prosecutors. “Let 'em say what they will. The fake news won’t win against the thousands of patriots who recorded today.”

This stands in contrast to claims made by Alabama Rep. Mo Brooks, who has blamed Antifa for the riots at the Capitol building several times since the attack occurred.

“Evidence, much public, surfacing that many Capitol assaulters were fascist ANTIFA, not [Donald] Trump supporters,” Brooks said in a Jan. 7 tweet. “Again, time will reveal truth. Don’t rush to judgment. Don’t be fooled by #FakeNewsMedia whose political judgment drives their reporting.”

Watson can be seen in photos inside the Capitol building the day of the riots next to known QAnon conspiracy theorist and Trump supporter Jake Angeli, who wore a fur hat with horns while shirtless, and a man waving a Trump flag and wearing a Trump hat.

Law enforcement were able to identify and apprehend Watson in part by comparing images of his participation at the Capitol riots with those from his personal social media accounts, according to court documents, though many of Watson’s accounts have since been deactivated including his Twitter, Instagram and Twitch.

Federal agents arrested Watson in Auburn Monday, and he also had his $103,000 bond, which stemmed from LSD and marijuana trafficking charges from July last year, revoked by a Lee County court for violating his bond agreement by travelling out of state to participate in the riots.

Watson was previously arrested and charged July 2, 2020, for trafficking marijuana, trafficking LSD and two counts of possession of a controlled substance, and police said he was in possession of over 2.2 pounds of marijuana and over 4 grams of LSD, according to court documents.

Though it is currently unknown what new charges Watson faces, acting U.S. Attorney Michael Sherwin said federal agents have already identified 170 individuals believed to have committed crimes at the Capitol, with 70 of those individuals having been charged with crimes ranging from misdemeanors to felonies.

“The scope and scale of this investigation and these cases are really unprecedented, not only in FBI history but in DOJ history in which, essentially, the Capitol grounds outside and inside are a crime scene,” Sherwin said in a press conference Tuesday. “We have literally thousands of potential witnesses and a scenario in which we are going to have, I believe, hundreds of criminal cases.”

Meanwhile, Brooks is facing calls to be censured by other U.S. representatives for his own part in the violence at the Capitol after Brooks said to a crowd in Washington, D.C., “today is the day American patriots start taking down names and kicking ass,” hours before a riot began that left five people dead and more injured.

Oldest message in a bottle ever found confirmed by archives

Why this whole Australia town is underground

Why this whole Australia town is underground

An ATV accident took the life of a 15-year-old in Lee County Monday evening, and authorities with the Alabama Law Enforcement Agency are inves…

Officers with the Valley Police Department are investigating the death of a Valley man after his body was found Saturday afternoon, police said.

An ATV accident claimed the life of a 17-year-old from LaFayette on Sunday, authorities with the Alabama Law Enforcement Agency said.

The Auburn City Council unanimously approved a $1.5 million contract on an integrated system for the Auburn Police Division’s camera and equip…

Traffic stop by Auburn Police leads to car chase; more people these days are refusing to pull over, sheriff says

Watch Now: Can you help Opelika police identify this breaking and entering suspect?

A scan of a social media post William Watson made presented as an exhibit in a motion to revoke his bond Monday.

A mugshot of William Watson presented as an exhibit in a motion to revoke his bond.

A compilation of photos of William Watson from his social media and pictures taken at the Capitol Jan. 6 presented as an exhibit in a motion to revoke his bond on Monday.