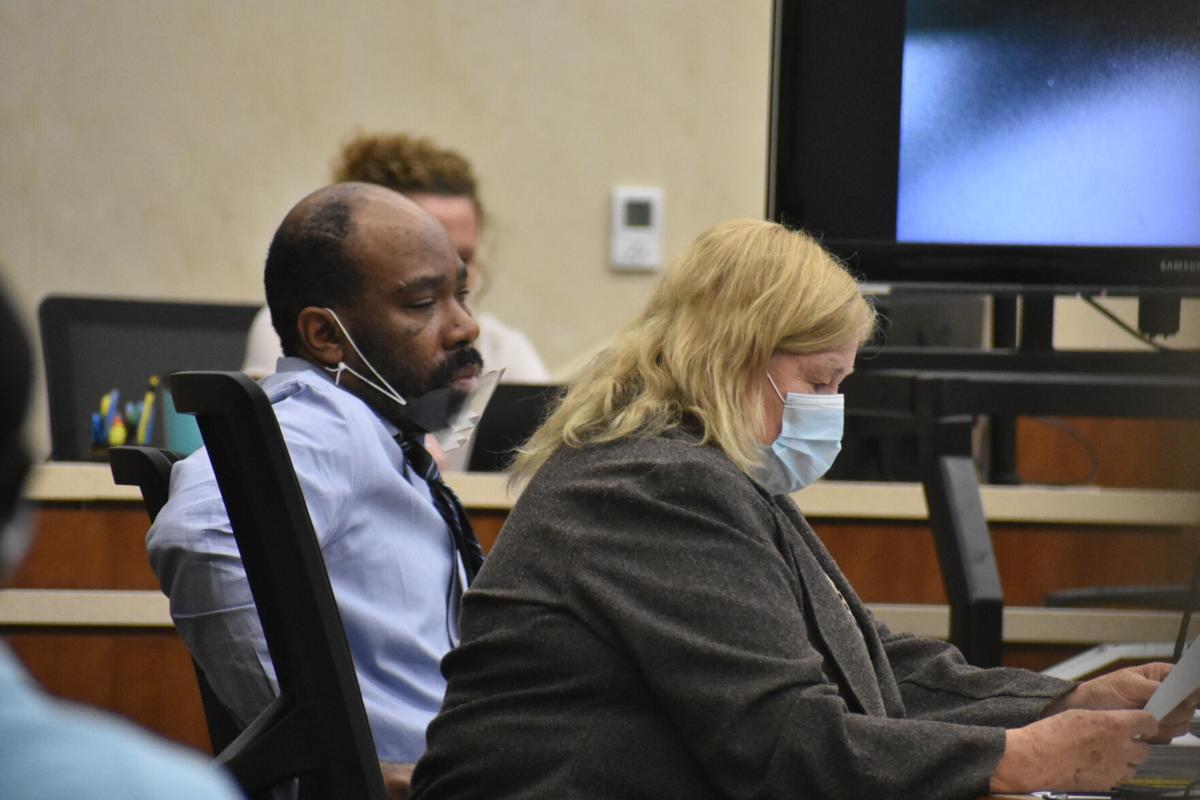 Brian Askew (left) sits with his attorney, Margaret Brown (right), at his trial on Wednesday, June 16, 2021, at the Lee County Justice Center in Opelika. 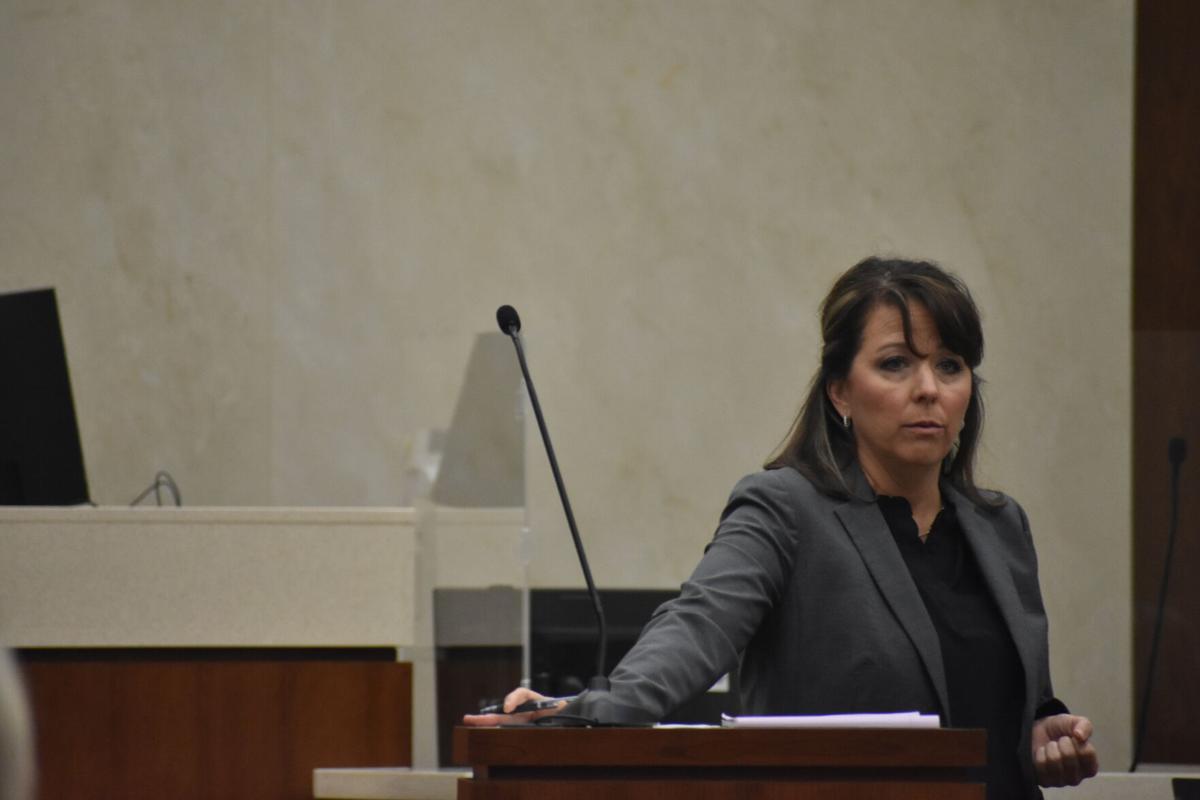 Assistant District Attorney Cathey Berardi gives her opening statements in the trial of Brian Askew on Wednesday, June 16, 2021, at the Lee County Justice Center in Opelika. 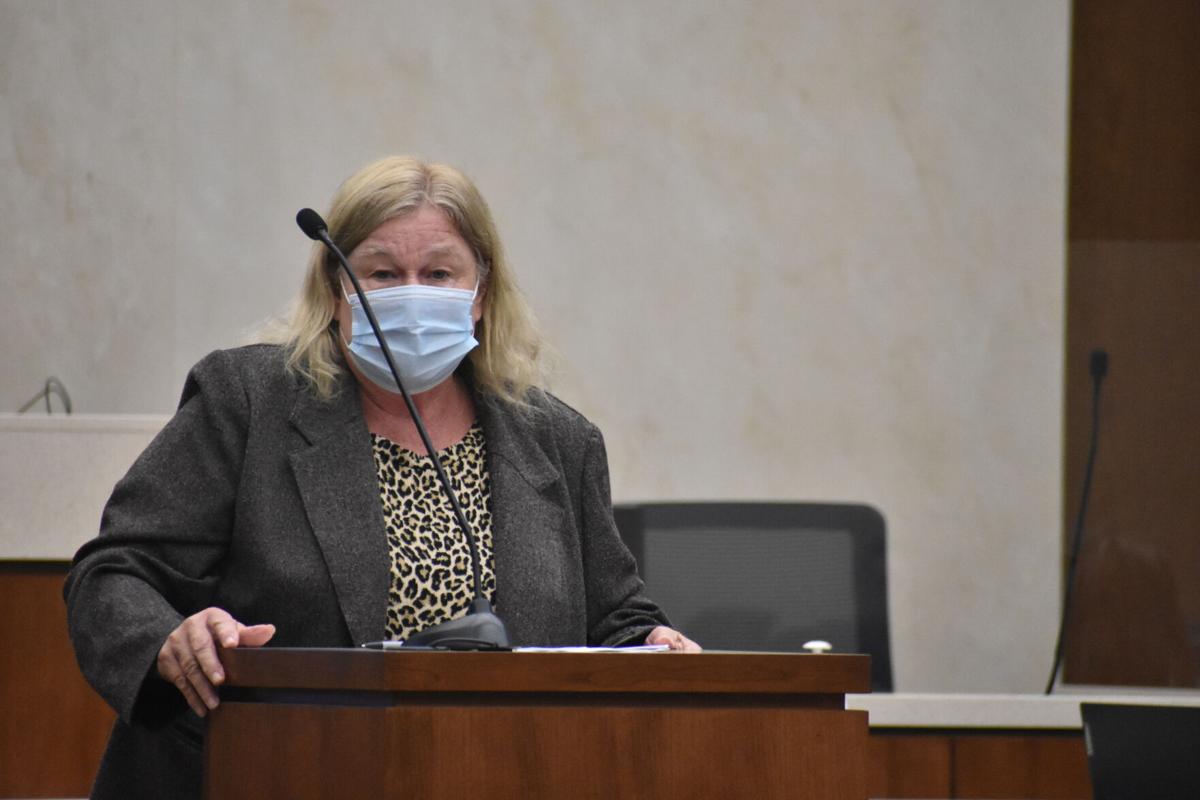 Defense Attorney Margaret Brown gives her opening statements in the trial of Brian Askew on Wednesday, June 16, 2021, at the Lee County Justice Center in Opelika.

An Auburn man is on trial Wednesday after he was charged with the first-degree rape, first-degree kidnapping and first-degree human trafficking of a 13-year-old girl who ran away from the Lee Youth Development Center in October 2017.

The girl “left the facility and was later picked up by several unknown males in a vehicle and taken to a residence in Auburn,” according to a 2018 press release from the Auburn Police Division. “While at the residence, she was held against her will and sexually assaulted.”

Brian Denare Askew, 40, was arrested and charged in January 2018 after he allegedly assaulted the 13-year-old victim at his residence in October 2017, and prosecutors said he kept the victim at a trap house to have sex with men there.

“She was treated as nothing more than a commodity, or an object,” Assistant District Attorney Cathey Berardi told the jury during her opening statements. “She was something to the defendant and all of his buddies that they didn’t really care about, but she was something that they used when they wanted her. They shared her, they passed her around, and they did it as if she were something dispensable.”

Berardi said the trap house the victim was taken to belonged to Askew, and that the victim was “supplied” to men who came there to buy drugs. The prosecutor also said the victim was given drugs while there in order to help her comply with what was asked of her.

“We can only imagine what this place seemed like through the eyes of a 13-year-old—a 13-year-old in a trap house that was isolated and with strangers all around,” Berardi said. “To aid her acquiescence and make sure she was going to do what was expected of her, she was given drugs. … During the time she was there, she was made available and supplied to a lot of different men.”

Berardi told the jury the human trafficking charge against Askew could be proven by showing that the defendant “knowingly obtains, recruits, entices, solicits, induces, threatens, isolates, harbors, holds, restrains, transports, provides or maintains any minor for the purpose of causing a minor to engage in sexual servitude,” and said, after the evidence was shown, that she believed the jury would find him guilty.

“At the end of this trial … I don’t think you will have any question of what happened in this case,” Berardi said. “At the end of this, I submit to you that we will have met that burden and presented evidence beyond a reasonable doubt as to human trafficking, and I will ask you then as I do now to find him guilty. Hold him accountable for what he did.”

Defense Attorney Margaret Brown said the evidence in the trial would show that Askew did not commit the crime of human trafficking and that Askew wasn’t around a lot of the time when the victim was at the trap house.

“In this case, we expect the evidence to be that [the victim] was there, and a lot of the time she was in Auburn at the trap house at this particular location my client wasn’t even there,” Brown told the jury during her opening statements. “We expect the evidence to show that he does not live there, that even when she arrived there the first time that he did not spend much time or spend the night there.”

Brown reminded the jury that the defendant had the presumption of innocence until the state proves every element of the charges levelled against him, and said she believed the evidence would show that her client would not be proven guilty.

“We believe the evidence will show that yes, the young lady ran away, yes she ran into some folks that she would’ve been a lot better off not to be around, but we do not expect the state to be able to show what’s termed ‘human trafficking,’” Brown said.

Authorities with the Tallapoosa County Sheriff’s Office are on the lookout for a murder suspect deemed armed and dangerous, according to a sta…

A single-vehicle crash in Tallapoosa County claimed the life of a Dadeville man on Friday night, authorities with the Alabama Law Enforcement …

Brian Askew (left) sits with his attorney, Margaret Brown (right), at his trial on Wednesday, June 16, 2021, at the Lee County Justice Center in Opelika.

Assistant District Attorney Cathey Berardi gives her opening statements in the trial of Brian Askew on Wednesday, June 16, 2021, at the Lee County Justice Center in Opelika.

Defense Attorney Margaret Brown gives her opening statements in the trial of Brian Askew on Wednesday, June 16, 2021, at the Lee County Justice Center in Opelika.