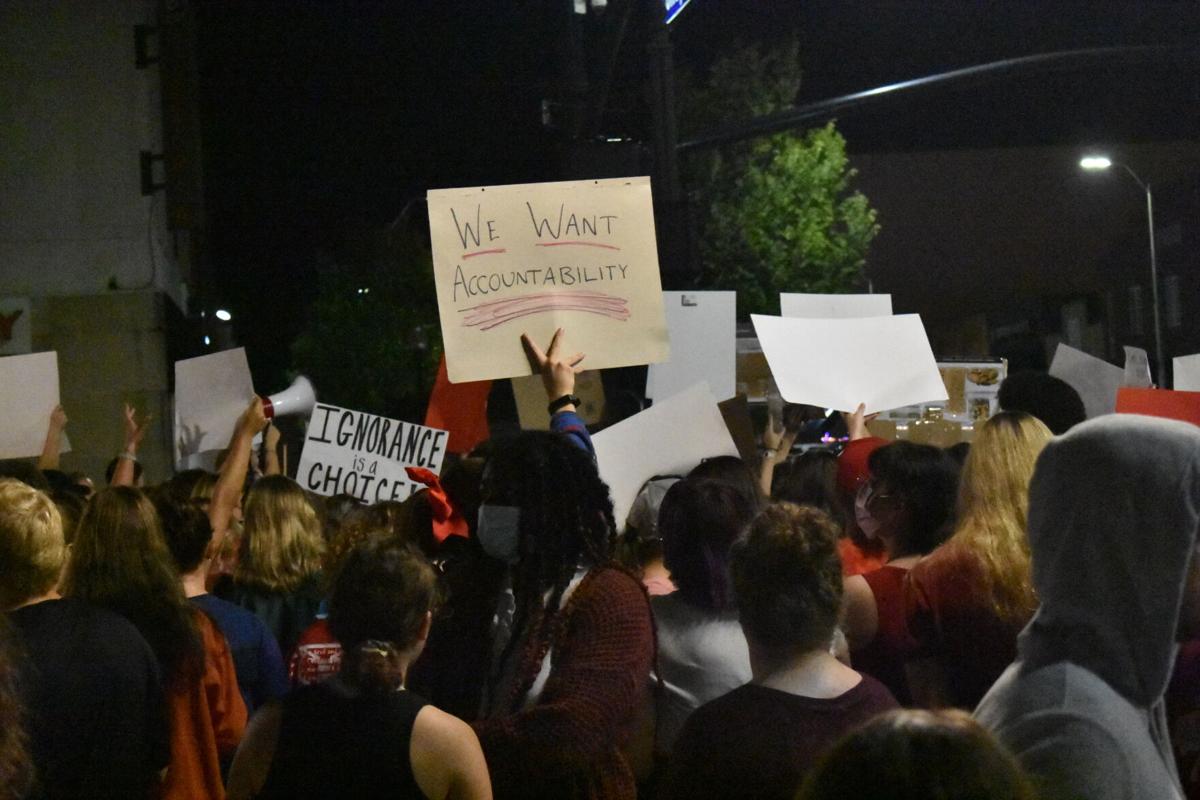 Auburn men and women gather at Toomer’s Corner to protest the recent reports of sexual misconduct at Auburn University on Tuesday, Sept. 14, 2021, in Auburn, Ala. 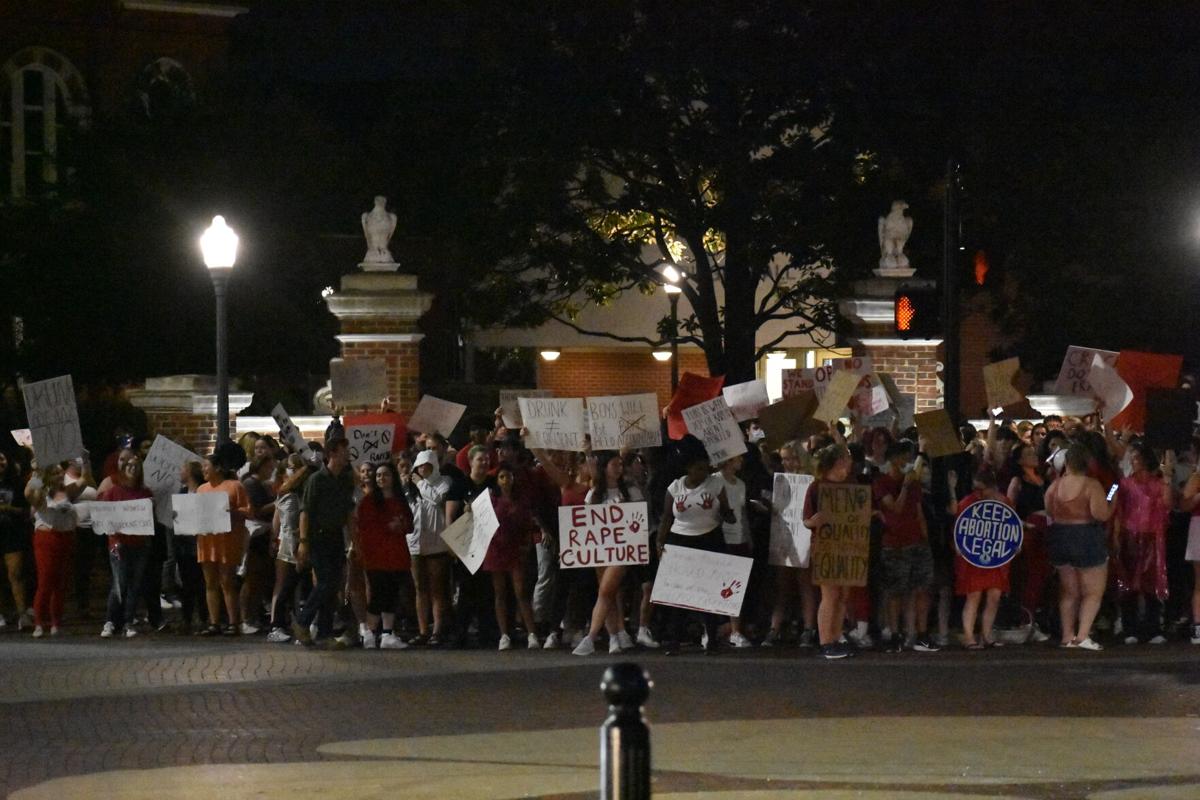 Auburn men and women gather at Toomer's Corner to protest the recent reports of sexual misconduct at Auburn University on Tuesday, Sept. 14, 2021, in Auburn, Ala.

More than 100 protestors took up shouts of “Hold the school accountable,” “Justice now” and “Which one of us is next?” as traffic through College Street slowed to a crawl while drivers honked in solidarity and support for the message and other drivers and pedestrians looked on.

The protest came after a release from Auburn University Campus Safety & Security sent out Tuesday said a student disclosed to police that she was raped Friday night at an unnamed fraternity house, and while the sexual assault survivor did not recall the details of the incident, she disclosed physical injuries consistent with a rape.

Auburn University alumna Emily Myler held a cardboard sign at Toomer’s Corner Tuesday night reading “Don’t be shy, tell us which frat,” and said she came to the protest because she wanted to help keep Auburn women safe.

“I went to school here, I just graduated and it’s sad to see that this is still an issue and we have to stand out here in the rain to get someone’s attention,” Myler said. “Auburn is trying to protect the people who are not being held accountable. We want them to be held accountable for their actions.”

Myler said Auburn University should disclose the name of the fraternity related to the Auburn student’s account of her sexual assault and punish them accordingly.

Myler was not alone in wanting the disclosure of the fraternity’s name. Auburn student Skylar Park said that the university has an obligation to release the name of the fraternity in order to inform students so that they can protect themselves.

“I think everyone here finds it ridiculous that in the past two weeks there’s been three sexual assault reports and the university’s response has been the same blanket statement over and over again,” Park said. “Let’s prevent this from happening again if at all possible, and let’s provide these women, students and my classmates with something to help them.”

Prior to the statement from campus safety made Tuesday concerning the alleged rape at an unnamed frat house, campus safety released a statement Sept. 10 about a female student having reported that she was fondled by a stranger while walking near Aubie Hall earlier that morning and another statement on Sept. 8 that said another student reported being raped and physically assaulted a week prior at an on-campus residential facility by an acquaintance.

Auburn student Amber Parr said she wanted more information about the sexual assaults and actions from the university other than just the emails the school sends out whenever there’s been another report.

In an update to the statement released by campus safety Tuesday, the university said that the student had disclosed the rape to police but had not made an official report at the time.

“We support the rights of victim/survivors to report when and how they choose,” the statement read. “We are required by federal law to report these incidents to the campus community even when disclosed by a third party. As a part of our reporting process, we strive to protect the identity of the victim and not interfere with any investigations that may develop.”

Assistant Police Chief Clarence Stewart said the Auburn Police Division is dedicated to the safety of students and the community as a whole, and he said that sexual assault survivors are encouraged to speak to the police so they could file a report if they chose to and so officers could help connect them to local resources.

“We want to let people know that if they have been a victim, they can contact us,” Stewart said. “[The victims] aren’t obligated to do a report, but we would like to speak with them and give them some of these resources and let them know what additional options they have.”

The statement from campus safety provided a list of resources on and off campus for sexual assault survivors to contact, including Safe Harbor at 334-844-7233 and Rape Counselors of East Alabama at 334-705-0510.

Student survivors can also report incidents to the Auburn University Title IX Coordinator at 334-844-4794 and find more resources at www.auburn.edu/titleix

John “Squirrel” Cross, the suspect involved in a gunfire exchange with a Lee County deputy during a traffic stop on Oct. 20, was released from…

Judge Steven Speakman ruled John “Squirrel” Cross will be held without bond at a hearing Wednesday afternoon at the Lee County Justice Center.

Auburn men and women gather at Toomer’s Corner to protest the recent reports of sexual misconduct at Auburn University on Tuesday, Sept. 14, 2021, in Auburn, Ala.

Auburn men and women gather at Toomer's Corner to protest the recent reports of sexual misconduct at Auburn University on Tuesday, Sept. 14, 2021, in Auburn, Ala.