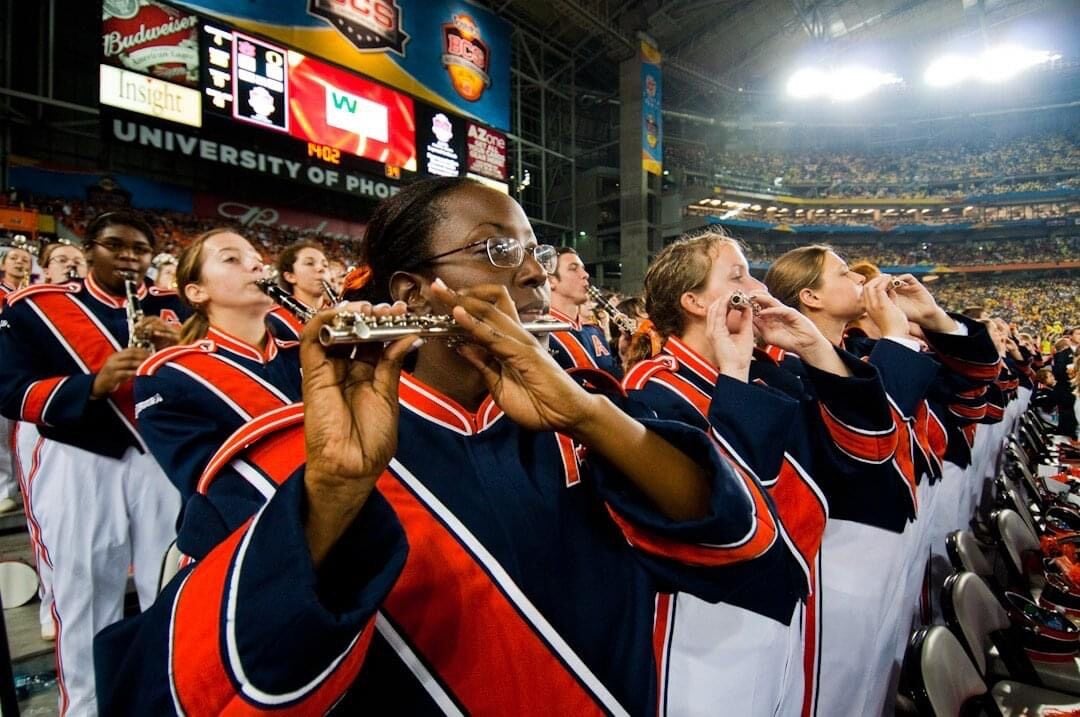 Veronica Brock plays the flute with the Auburn University Marching Band at the BCS national championship football game in 2010. 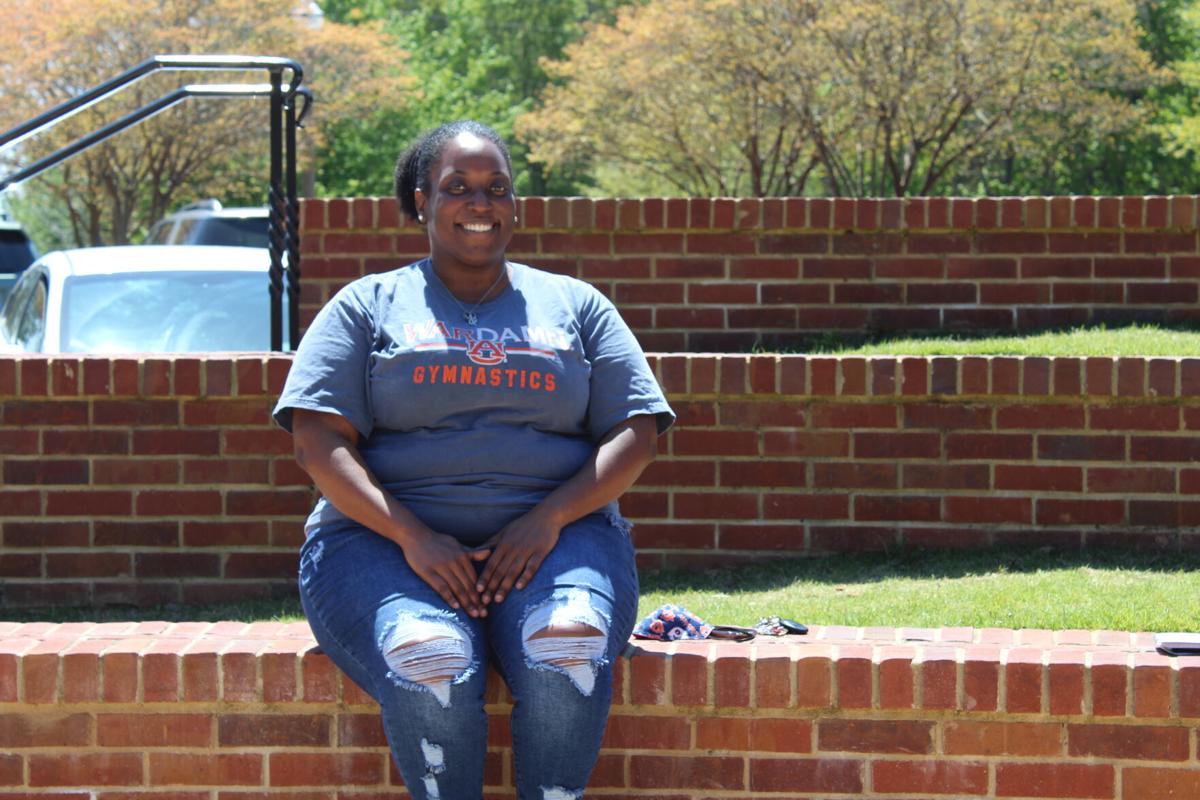 When she was 8 years old, living in Five Points, her cousin was switching musical instruments and gave her a student model flute and band method book. Brock taught herself how to play it, and when she was 11 she joined the sixth-grade band.

Still, she didn’t think being a real musician was possible.

“When you grow up in Chambers County, you get out of high school and you find a factory job,” said Brock, now 37. “And so that was what I was going to do.”

But when she was 12, the family moved to Cartersville, Ga., and Brock was encouraged at her new school to play the trumpet. “My mom raised me to be headstrong,” she said, “so I was like, ‘Nope, I have a flute and I’m going to play the flute.’”

She encouraged Brock to apply to Auburn and pursue a career in music.

Brock did enroll at Auburn in the fall of 2004, and it was the start of a long journey that continues today.

She struggled to pay out-of-state tuition and said she ended up homeless for the last month of the semester. “I was sleeping in my car or in the Foy Student Union,” she said. “… So, I moved back home.”

Brock took up customer service jobs, working to pay off debt to the university. Five years later, she followed the call to be a music teacher back to the Plains and started her second semester. Today, she continues to move toward her degree while she supports a family.

“I’ve been chucking away at classes since 2009,” she said, laughing.

‘I love my daughters’

She has five daughters, and she’s raising them to stand up for themselves. Three of them – Veronica, 21; Erin, 12; and Elliyah, 6 – are singers, while 13-year-old Kameron plays the flute in band and 7-year-old Kendall dances.

“I love music so much, I love playing flute so much, I love my kids so much,” Brock said. “I did not like kids when I was younger – my little cousins gave me chicken pox, so at like 10 years old I was done, I didn’t like them.

“Once I got older and I actually had children and had to be around them, it was something about the way they smile and how they find happiness in anything. … I just want to protect them, and love them, and care for them, and everything. Forever.”

For a time, Brock said, she went from practicing three to four hours a day to not at all. She found it “emotionally draining” not to play.

She needed to play. She went online and searched for ensembles in the area within an hour of Auburn.

“My youngest was about 1 when I started trying to get back into practice, and she hated the sound of the flute,” Brock said. “That made it even more hard, because she would cry. I knew I needed to keep playing to get better.”

She started playing with East Alabama Community Band in Auburn on Monday nights and Capitol Sounds in Montgomery on Thursdays.

A memory that sticks out, she says, is when she first auditioned for the Symphonic Band. Playing a piece from Cartersville’s All-State performance, the then-21-year-old wished to make the exclusive ensemble. As she left the room, the director asked her if she’d seen the list of audition music posted to the university website.

“It’s so important to have music teachers that are trained in your instrument because they know those things — I didn’t know those things,” Brock said, calling the moment “a big awakening.”

“I didn’t even know being a flute teacher was an actual job until I got to college and got my first flute teacher,” she said.

She wants to be an advocate for bringing music education opportunities to everybody, she says.

“Auburn has a really good music program whereas in Chambers County, they have one teacher that has to go to one or three schools, so they don’t have the resources and some of them don’t even have the knowledge – the band director has so much to remember,” she said. “I’m sure some things fall through the cracks of realizing what all is available.

“I would love to see more diversity in the major orchestras, some of the smaller orchestras and even ensembles.”

Brock works in customer service for Verizon, and is taking a break from school to make money for tuition.

“I only have a year left, so if I can just scrape up enough to get through this last year, it’ll be better,” she said.

Her oldest daughter, also named Veronica, is a sophomore in finance at Auburn University, and in the fall of 2020, mother and daughter took a semester of virtual classes together and encouraged one another to keep going.

“There were times where I had to give her a pep talk while I’m breaking down myself,” Brock said. “It was rough. Most of the time, I just kept my camera off because I didn’t want anybody else to be distracted seeing my kids running around in the background.”

While sometimes she feels she should be ahead of her daughter in school, Brock says she’s not quitting.

“I beat myself up sometimes because I feel like I’m supposed to be so far ahead right now to where I can just help her focus on her,” Brock said. “The positive is she sees me not giving up and how important education is, so hopefully she doesn’t give up.”

Through it all, Brock said she is grateful for the “overpour of support” from her Auburn University classmates, professors and instructors who challenge her to keep moving forward.

“I feel like it would be easier transferring to a new school, get a breath of fresh air, but I’m so close to the finish line here and I feel like so many of the faculty that have helped me I don’t want to let them down,” Brock said.

Her daughters, she says, carry her through the day.

Lee County Schools announced Wednesday that all students, except for those accepted to an already established online program for high school s…

Free lunches and breakfasts are being given out to all children 18 and under at Opelika High School this summer.

Auburn High School’s principal praised the graduating class on Wednesday for enduring an experience unlike other classes in the school’s history.

Veronica Brock plays the flute with the Auburn University Marching Band at the BCS national championship football game in 2010.