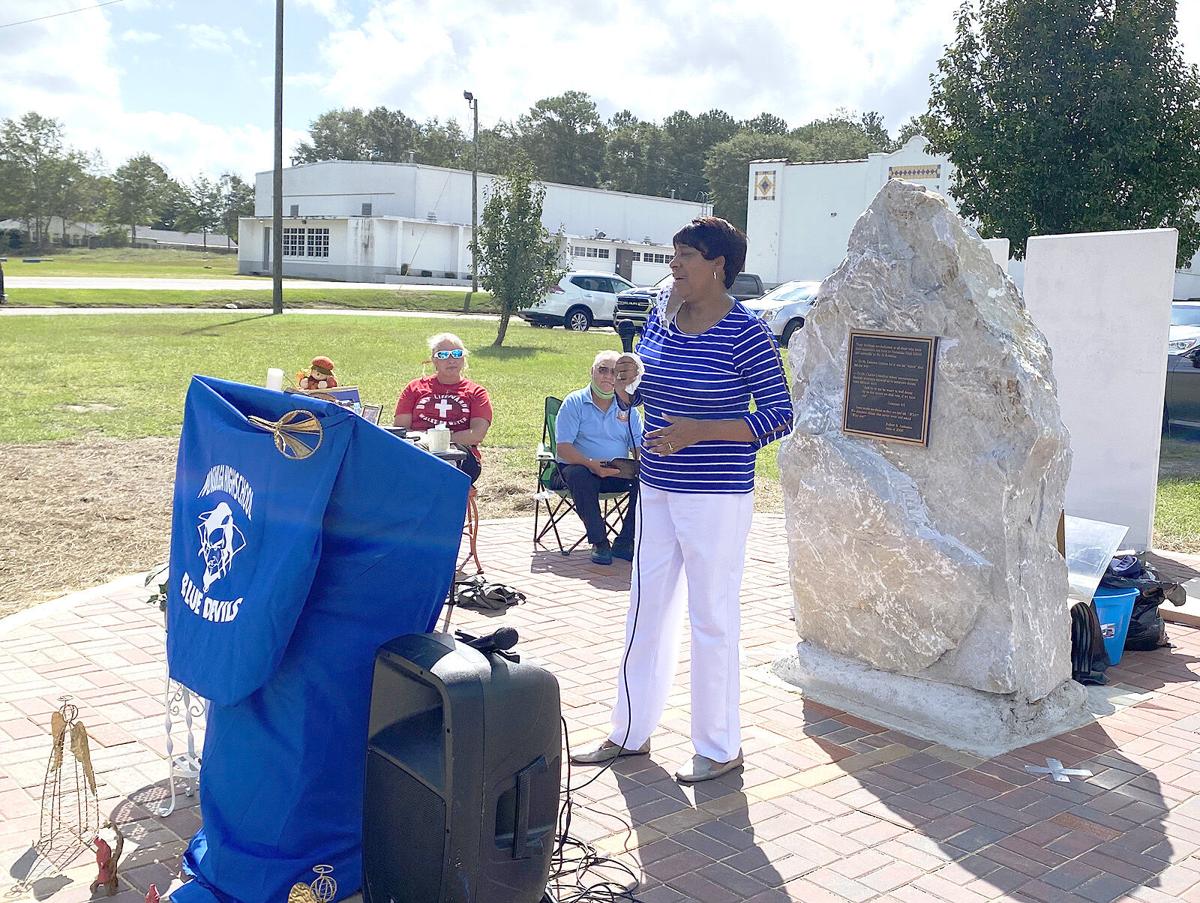 Felicia Johnson Chandler addressed the crowd Saturday, speaking on the history of the Notasulga's Rosenwald School and efforts to get the high school on the National Register of Historic Places. 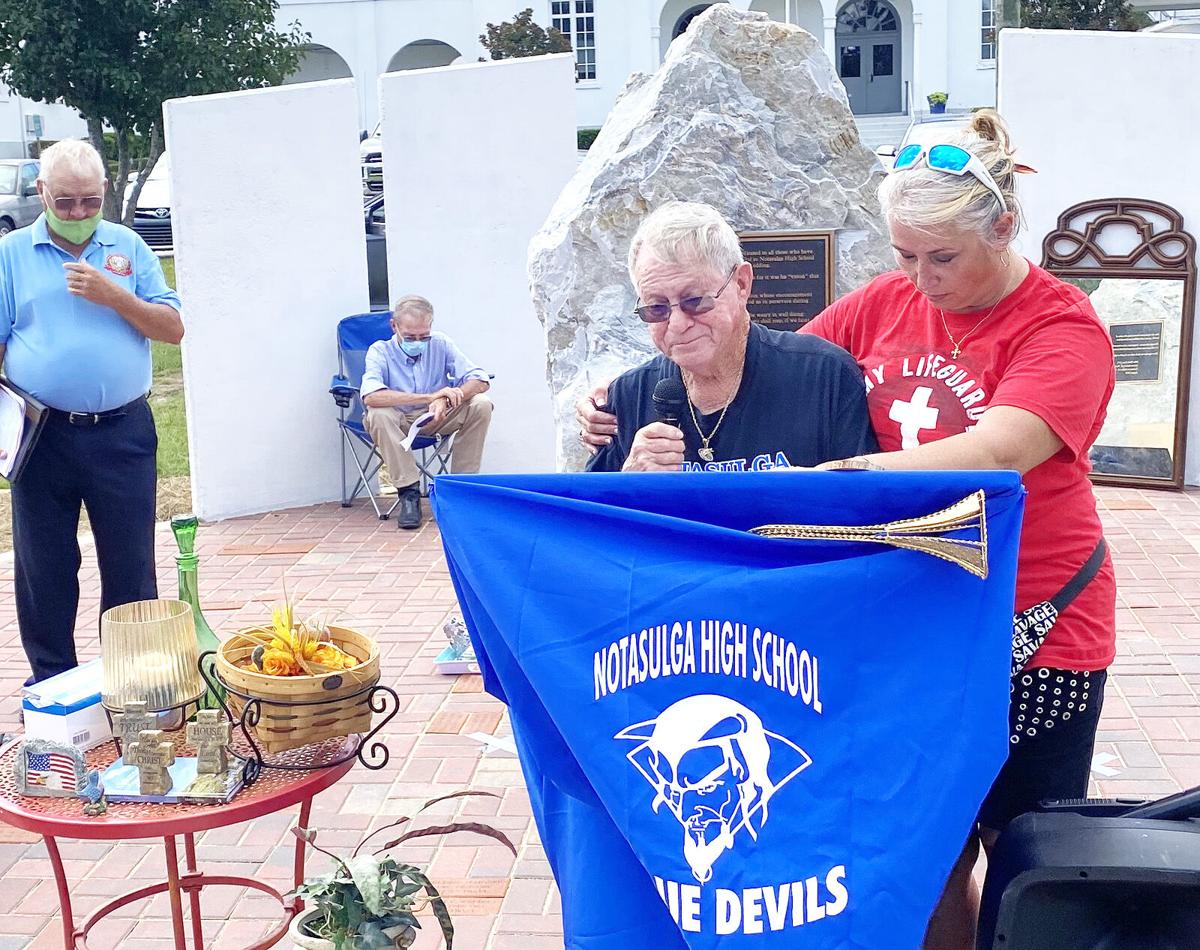 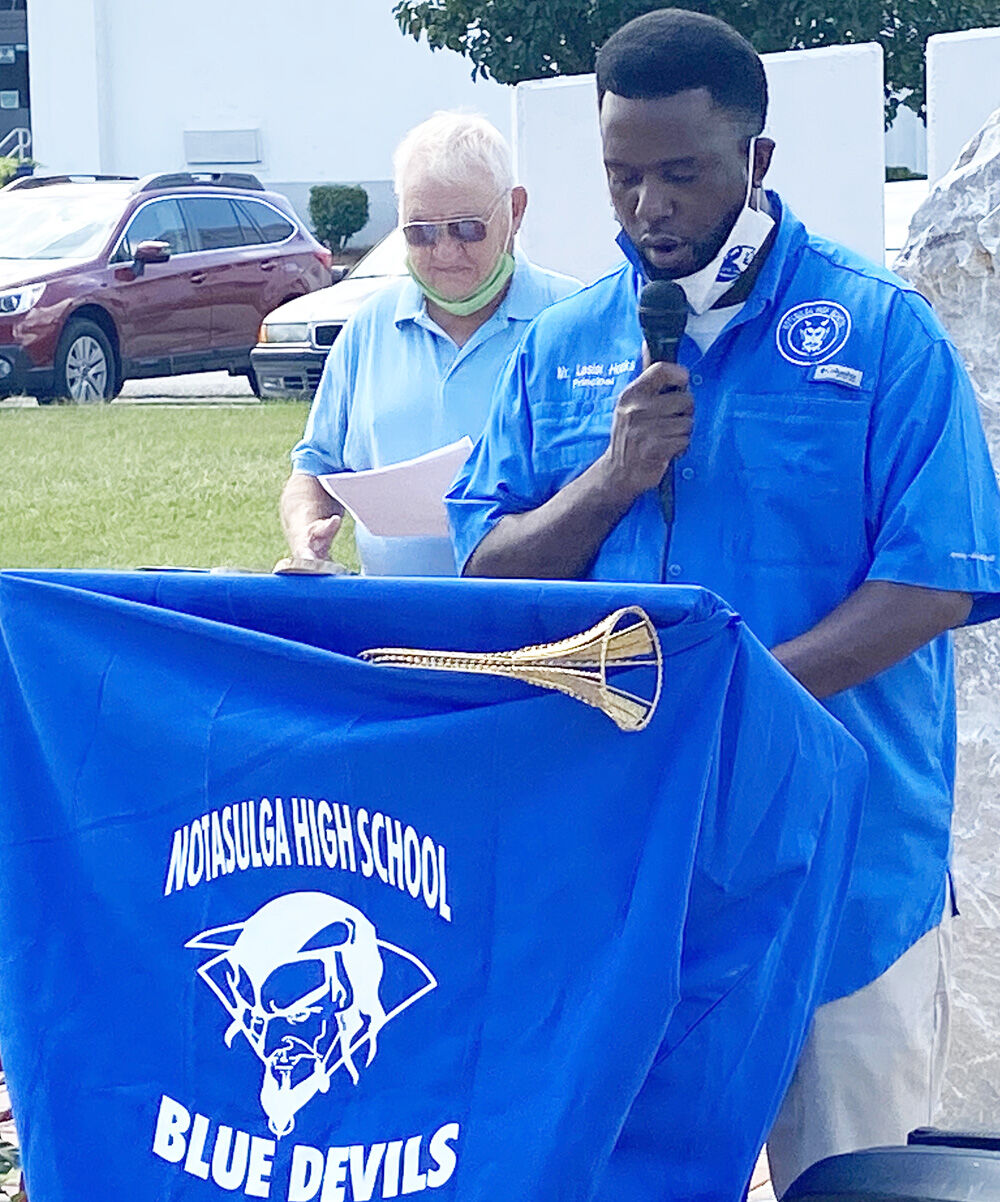 The memorial, located on the school’s front lawn, will feature a plaque recognizing the school as a state historic site and – possibly – another plaque announcing it is on National Register of Historic Places.

“The purpose of this memorial to show how a thing called racism caused Macon County High School to be burned to the ground and how it was rebuilt as Notasulga High School,” explained Dwight Sanderson, the retired Notasulga football coach who earned a spot in the state Hall of Fame.

A Federal court order in 1963 to desegregate Macon County Schools led to violence and white flight that plagued both the high school and the town for the next few years – thanks in no small part to the loud opposition of then-Gov. George Wallace and Notasulga Mayor James Rea.

A 1964 fire, which may have been arson, failed to shutter the school. Sanderson recalled that acrimony for the crowd Saturday.

“(Then-principal) Harold Manley was one of the toughest human beings I ever saw,” Sanderson said of the man who led the school during that era. “There were fist fights breaking out around town. I think people got sick of fighting him eventually.”

Sanderson credited Manley and his successor Robert Anderson with helping to defuse tense atmosphere and move the school forward. By the 1972-73 school year, Notasulga High School’s student body was evenly divided between blacks and whites and the school was hailed as a model of desegregation in the South.

Macon County Schools Superintendent Jacqueline Brooks told the crowd that Notasulga High School and the other county schools are irreplaceable parts of their communities, and she promised none of them are going to be closed on her watch.

“I would never bring a recommendation to close any school in this county,” said Brooks, who has run the district for 10 years. “We are committed to Notasulga High School remaining here with its rock in front.”

Brooks, who attended the now-closed South Macon High School, admitted that she wasn’t aware of Notasulga High’s rich history before the recent push for state and national historic recognition.

“I never knew we were history in the Macon,” Brooks joked.

An application to be included on the National Register of Historic Places is in the works, and organizers are raising money by selling personalized bricks to be included in the memorial.

Opelika City Schools should navigate the next budget year with little trouble from COVID-19, according to district officials.

Raven Christopher, co-author of The Old Federal Road in Alabama: An Illustrated Guide, will explore that historic stretch through Macon County…

Three parents turned up to Tuesday’s city school board meeting to complain about problems with Edgenuity, the vendor hired to provide remote i…

Auburn assures no plans to shut down campus, says doubling of new cases was expected

Felicia Johnson Chandler addressed the crowd Saturday, speaking on the history of the Notasulga's Rosenwald School and efforts to get the high school on the National Register of Historic Places.