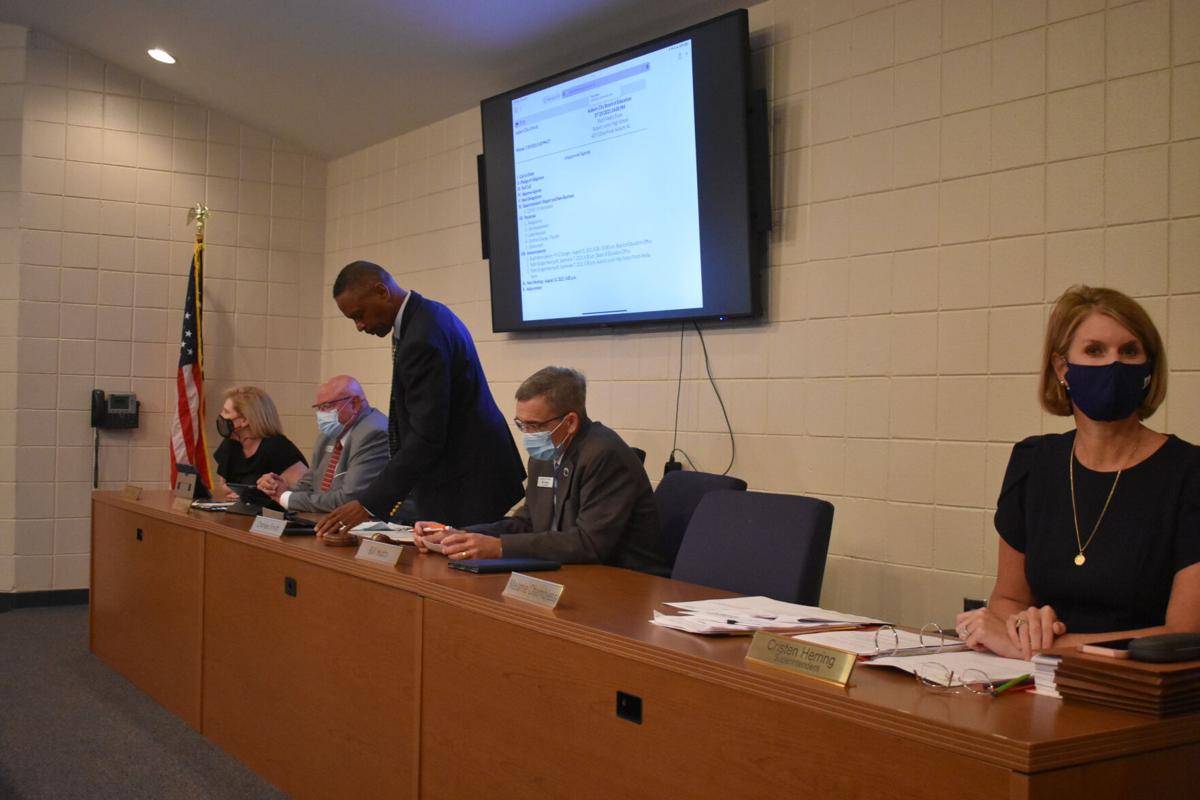 The Auburn City Schools Board of Education unanimously approved a mask requirement for the first six weeks of the fall semester at a special meeting Thursday, July 29, 2021. 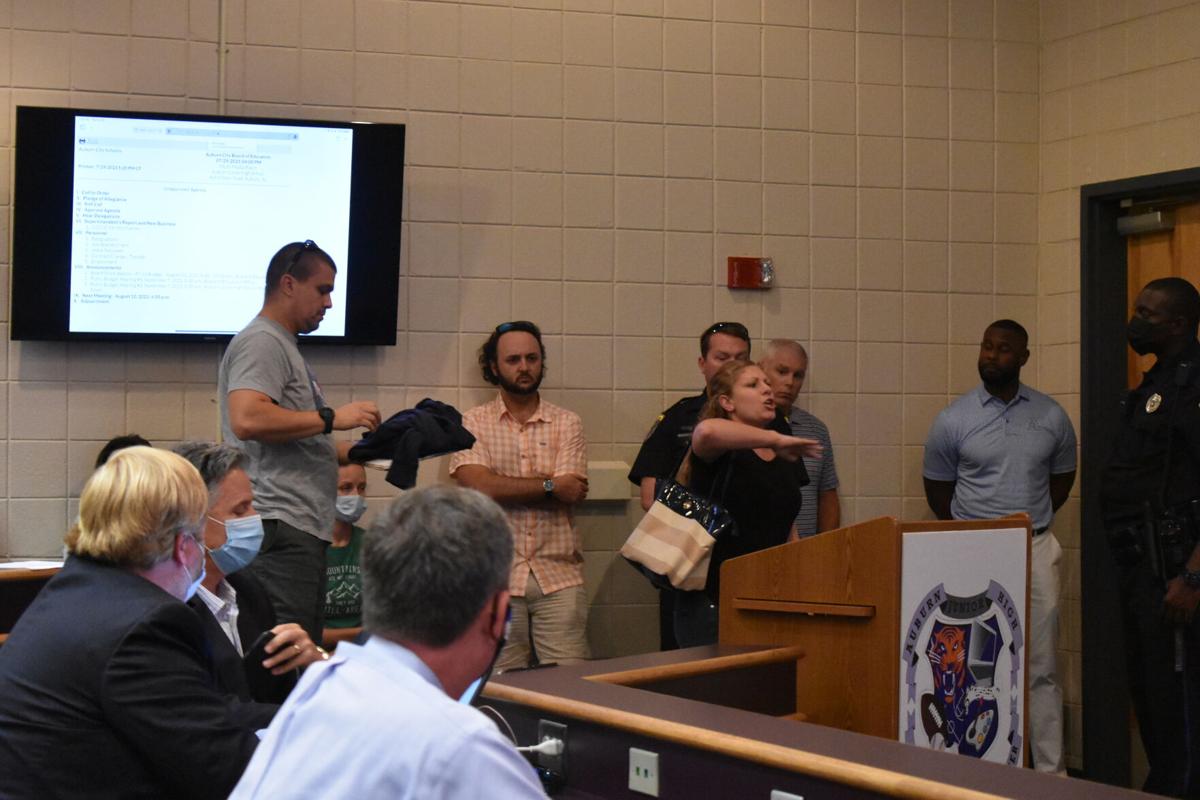 A local parent shouts in disapproval at school officials before exiting the room before the Auburn City Schools Board of Education unanimously approved a mask requirement for the first six weeks of the fall semester at a special meeting Thursday, July 29, 2021.

“You don’t care about our kids at all!”

“This is pure politics!”

“I dare you to send them home!”

The shouts rang out over the sound of the gavel being struck and struck again by Auburn City Schools Board of Education Chair Charles Smith in an attempt to bring order to the unruly crowd, and when many of those in the room left, Board Member Bill Hutto thanked the community for the feedback they had received before they voted.

“We appreciate all of the input we’ve received,” Hutto said as a few stragglers in the room scoffed in disapproval. “Somebody made the comment that we can please everybody, but that’s not the case.”

The mask requirement will go into effect for the first six weeks of the school year from Aug. 2 to Sept. 17, and require all individuals to wear masks while inside school buildings and on school buses, according to the recommendation from Superintendent Cristen Herring.

“I am recommending masks or facial coverings to be required for all individuals at indoor activities in Auburn City Schools and on school buses,” Herring said. “With respect for the position and opinion of each student and stakeholder, I am committed to the diligent setting of our school data, the data of our local community and the assessment of our safe return to school.”

Over the course of the first six weeks of the school year, Herring said, the schools would collect data on the effectiveness of the mandate and present their findings to the school board at its Sept. 14 meeting in order to reevaluate the mask requirement or see if it needs to be extended.

As a part of the mask requirement, masks will not be required for outside activities like physical education classes, recess or athletics, and Herring said the decision to require face coverings again is based on guidance from local healthcare officials as well as the upward trend of COVID-19 cases in the community.

The decision comes after new recommendations from the CDC sent out earlier this week are now encouraging individuals, even those who have been vaccinated, to wear masks or face coverings indoors in public especially if one has a weakened immune system in order to protect against the Delta variant, and Opelika City Schools announced Tuesday that it will require masks to be worn indoors in its school buildings.

As of Monday, the number of hospitalized COVID-19 patients in Alabama has risen to over 900, a figure that hadn’t been seen since February, and health officials with the East Alabama Medical Center have also seen an increase in coronavirus hospitalizations locally in recent weeks, a spike that could have been prevented had more citizens gotten their vaccines, EAMC officials said.

In spite of the new recommendations from the CDC as well as the spread of the virus throughout the state and local community, many of those who had come to the school board meeting spoke out against requiring students to wear masks in Auburn’s schools, citing their freedoms as Americans and parents, the lack of data supporting the effectiveness of mask wearing in regards to protecting against the virus, the emotional and educational toll it had on students and more as reason why they opposed the requirement.

Little to none of the dozens who spoke out against the mask requirement were wearing masks that night, and after each one finished having their say, the room broke out into applause from the audience.

Local parent and Auburn University professor Tracy Richard said she had children who were impacted this year by the mask requirement.

Local parent and scientist Jason Pratt was one of the few to wear a mask to the meeting and one of only two to speak in favor of the mask requirement that night by saying that the masks weren’t just about protecting yourself, but protecting others around you. As he spoke, he was consistently interrupted by boos, jeers and scoffs from the audience, causing the board chair to repeatedly use his gavel and attempt to keep the discussion respectful.

“COVID is terrible. We’ve seen 600,000 Americans die from it,” Pratt said. “The data says the masks like the one I’m wearing are up to 70 percent effective at blocking me transmitting it to you. That’s the data, that’s what it says: it’s called source control. If you actually read the CDC guidelines, that’s why they recommend wearing masks. … I’m wearing a mask to protect you, and the whole point is we should have our children wearing masks to protect each other.”

Check out these amazing secret tunnels built under Liverpool

Check out these amazing secret tunnels built under Liverpool

Biden: We have to act now on climate change

Biden: We have to act now on climate change

There were more than 8,400 new COVID-19 cases in public schools across the state of Alabama last week with over 250 of them having been report…

COVID-19 cases are rising in public schools throughout the state, according to the latest update on Friday from the Alabama Department of Publ…

Auburn University announces search for next president, no timeline set for new hire

Auburn University has begun looking for its 21st president.

West Smiths Station Elementary School transitioned from in-person learning to virtual learning Tuesday, according to a message on the Lee Coun…

The Auburn City Schools Board of Education unanimously approved a mask requirement for the first six weeks of the fall semester at a special meeting Thursday, July 29, 2021.

A local parent shouts in disapproval at school officials before exiting the room before the Auburn City Schools Board of Education unanimously approved a mask requirement for the first six weeks of the fall semester at a special meeting Thursday, July 29, 2021.