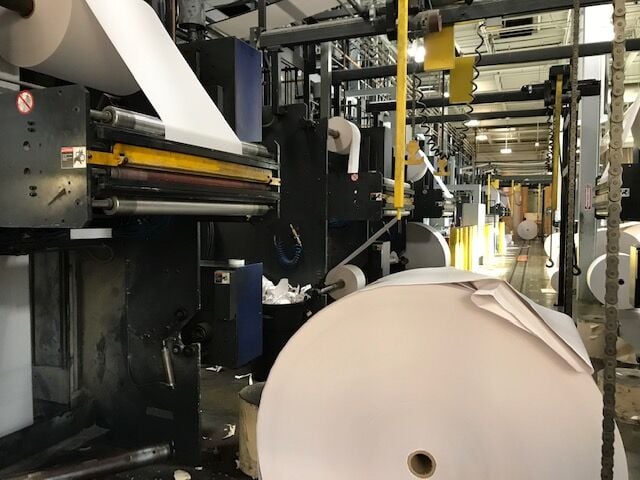 Your daily print edition of the Opelika-Auburn News starts with a giant roll of newsprint. 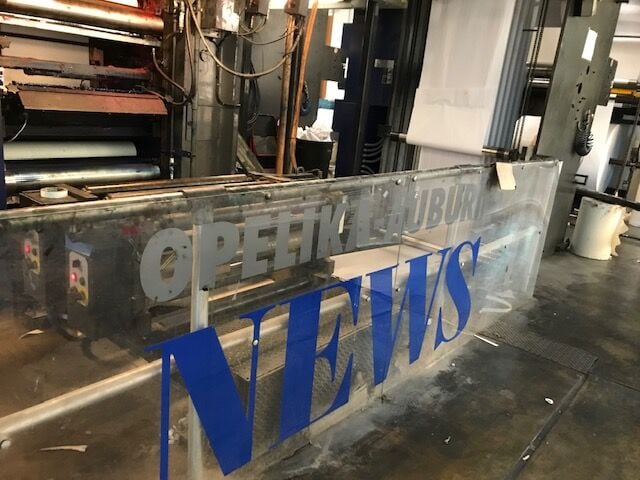 This is the first thing you see when you step inside the press room at the Opelika-Auburn News.

It’s the end of an era at the Opelika-Auburn News.

Late Sunday night, the company’s printing press off Society Hill Road will print a newspaper for the last time. Starting on Monday, the daily print editions of the Opelika-Auburn News and its other Alabama Group products, including the Dothan Eagle, will be printed in Montgomery by Gannett Publishing Services, which prints the Montgomery Advertiser as well as other newspapers throughout the state.

The O-A News’ management, newsroom, advertising and circulation departments will remain headquartered in Opelika-Auburn and will continue to focus on readers and customers in this area.

“I want to make sure everybody understands there’s not going to be any disruption in service or delivery of our print products,” said Wynn Christian, publisher of the O-A News and president of Lee Enterprises’ Alabama region. “We will continue to reach and engage audiences that value learning about our community and staying informed. That doesn’t change. It’s a matter of how we reach you, whether you’re a print or digital subscriber or you access our content through email newsletters or social media.”

Christian said this is a natural step forward as the O-A News makes the transition from a printing company to an information company. “From a business perspective, the customers we work with, thanks to technology, have more options for us to target specific needs of theirs. While the method of transmitting and receiving the news changes, our audience has actually never been bigger.”

The hard part, Christian said, is saying goodbye to the company’s 21-person print production staff. “Our thoughts are with our production employees,” he said, “and we thank them for their years of service to the O-A News.”

Seven days a week, through rain and shine, the O-A News’ printing press operated from 3 p.m. to 1 a.m. daily and produced an average of 14 different publications a day.

Over his career, Patrick has worked for 10 different newspapers in eight different states.

“I love running a press,” he said. “There’s a certain sound – you can hear things no one else can because you’ve done it so long. I’m up at night watching pages, and I don’t go to bed until I get the last page.

Patrick will be leaving Opelika to become the production director for another Lee Enterprises company, the Quad City Times in Davenport, Iowa, where he’ll be printing five daily newspapers. He starts on April 19.

Bill Faircloth, the O-A News’ press room supervisor, is retiring after 38 years of working on presses, the last 22 years in Opelika. He previously worked in the press room at the Columbus Ledger-Enquirer. He’ll stay at the newspaper through June 1, helping to shut things down and send equipment to other printing operations in Lee Enterprises.

Faircloth said that from the first time he saw a press run, he wanted to work on one. “I just like the challenge of it,” he said. “Anything can go wrong at any time.”

Back when he was younger, Faircloth said, he would see someone reading the O-A News and feel pride that he’d been a part of printing it.

Patrick said he feels the same way. “A newspaper informs your community,” he said. “It keeps people in touch with what’s going on in the community and around the world. It tells you what you can buy and what’s on sale.”

Dimon Kendrick-Holmes is editor of the Opelika-Auburn News.

A new business concept is being built where Cock of the Walk once stood that will include a restaurant, a plant nursery, live music and more.

A poor farm no more, the property at Shoofly Farm offers bed-and-breakfast rooms and peace and quiet

The view from the entrance of the Auburn Bed and Breakfast at Shoofly Farm in Waverly on Highway 431 is of towering 200-year-old pine trees, l…

A passenger rail service could be coming to Auburn.

Auburn, Opelika and surrounding community residents wanted a Whataburger, and now they’re getting two in under a year.

Your daily print edition of the Opelika-Auburn News starts with a giant roll of newsprint.

This is the first thing you see when you step inside the press room at the Opelika-Auburn News.