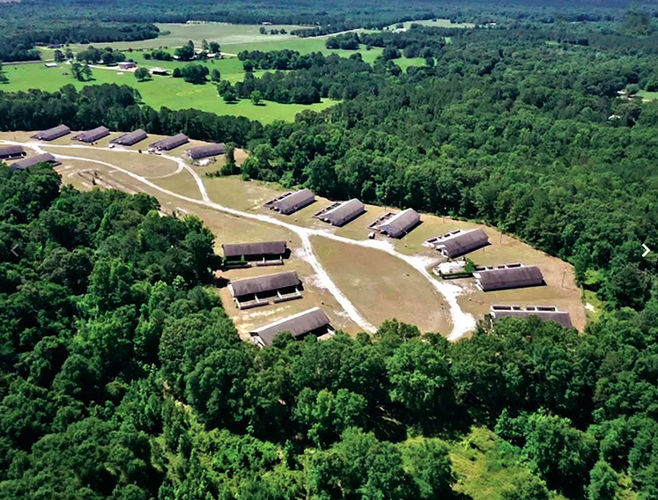 Big Dog Ranch Rescue will soon open on the site of a former Greyhound kennel in Shorter.

Lauree Simmons is CEO and Founder of Big Dog Ranch Rescue, based in Palm Beach, Florida.

The largest cage-free no-kill dog rescue in the country, Big Dog Ranch Rescue, is opening a new location this September in Shorter on the site of the former greyhound racing track facility at VictoryLand.

The Florida-based animal rescue bought the site as a means to help fight an overpopulation of homeless dogs across the Southeast. The facility sits on 100 acres and has 16 kennels. Big Dog hopes to eventually house 5,000 dogs a year at the new location.

This will be Big Dog Ranch Rescue’s second facility. It originally opened in Palm Beach in 2008.

Lauree Simmons, the CEO and founder of Big Dog Ranch Rescue, says that the Palm Beach facility is “pretty well maxed out” with 5,000 dogs and an additional 5,000 adoptions per year. She said the rescue has saved 53,000 dogs throughout its history.

“We are very dedicated,” Simmons said. “We have an amazing team of people, board members and employees and volunteers that are very driven for the mission of ending dog homelessness.”

According to Simmons, the Shorter location will help ease the burden on many smaller rural kennels.

“We focused a lot on underserved rural communities. Many of these rural areas don’t even have a facility,” Simmons said. “Small shelters have limited resources and limited space to take in the dogs and care for them. That’s been a big focus for Big Dog Ranch, going into areas where rescue is basically the dog’s only way out alive.”

Simmons said inflation has led families to neglect or abandon their pets as they struggle with higher costs for food, housing and gas. Kennel intake has risen by 70%, she said, and adoptions are down 50%.

“The problem in the South has really exploded with inflation and people not being able to care for their dogs,” she said. “We wanted to help Alabama, North Georgia, Tennessee, Louisiana, Texas, all the really hard-hit states that are experiencing such an influx of dogs coming into their shelters that have basically no choice but to euthanize for space. And good dogs shouldn’t die. They just need time and medical care and love and a home.”

The Shorter location had several draws for Big Dog, including the proximity of Auburn University and Tuskegee University. Simmons hopes to partner with the vet schools at both universities, which she believes would benefit both the students and the dogs.

“That looks very promising,” Simmons said. “We are really hoping to partner with both of them to not only help their students have more experience and exposure to the animals, but to also help move our animals and give them great medical care.”

Simmons said she sees irony in Big Dog’s move to Shorter, where greyhound racing, which she calls “an inhumane practice,” came to an end in 2011.

“The other thing that was great about it is this used to be 16 buildings that held 84 greyhounds in each building,” Simmons said. “It was a greyhound facility where all of the greyhounds that raced on the greyhound track were housed. The facility was up, it was all set up for dogs and has been empty for several years since they shut down.”

Simmons said Big Dog has saved close to 1,000 dogs from slaughterhouses in China, 6,000 dogs from Puerto Rico after hurricanes Maria and Irma, and 1,800 dogs out of the Virgin Islands after those same storms. It also began rescuing dogs from Ukraine after the Russian invasion earlier this year.

These dogs are eventually brought to the United States, and she said that the Ukrainian dogs are on their way.

“We’re just waiting for these dogs to finish their quarantine time before we fly them home to Big Dog Ranch,” Simmons said. “People are fleeing the country and so many of them have left their dogs behind. You see the pictures and, I mean, how do you say no? You just can’t.”

Big Dog Ranch plans on opening its Shorter location in September with five kennels. Dogs will be brought in, spayed, neutered and given medical treatment. When the dogs are ready for adoption, they will be transported to shelters in the Northeast where animal overpopulation isn’t as much of an issue as it is here in the South.

“Many of these dogs will go to areas that aren’t overpopulated where there is a higher demand to adopt a rescue dog than there is in the South,” Simmons said.

“When we get it fully up and operational, our goal is to be able to save an additional 5,000 dogs a year from Alabama and surrounding states,” Simmons said. “We want to do great things here for the animals. Our goal is to educate and help end this problem.”

Anyone interested in adopting from Big Dog Ranch rescue can do so by visiting https://www.bdrr.org/

On Saturday, “48 Hours” will be airing an episode about the disappearance of Auburn resident Lori Ann Slesinski and the man convicted for her …

A Georgia man died in Russell County on Tuesday evening after the mini-van he was driving struck a tractor-trailer truck, according to a relea…

Auburn police are investigating a fatal shooting early Monday morning and are searching for an Opelika man in connection to the shooting.

Chef opening new restaurant in Auburn in honor of mother

Randall Baldwin grew up cooking with his mother, Nancy, in Saraland down in Mobile County. He says she was a great cook of Southern coastal cu…

3 friends want to bring a self-pour, family-friendly taproom to Auburn. Here's how it would work

Three Auburn men are in the process of establishing The Plains Taproom, a bar in downtown Auburn that will allow patrons to pour their own drinks.

Colorado police cruiser hit by train with suspect handcuffed inside

Why an ex-Russian officer is feeling the army call-up

Why an ex-Russian officer is feeling the army call-up

Colombia and Venezuela to reopen borders

Colombia and Venezuela to reopen borders

Big Dog Ranch Rescue will soon open on the site of a former Greyhound kennel in Shorter.

Lauree Simmons is CEO and Founder of Big Dog Ranch Rescue, based in Palm Beach, Florida.