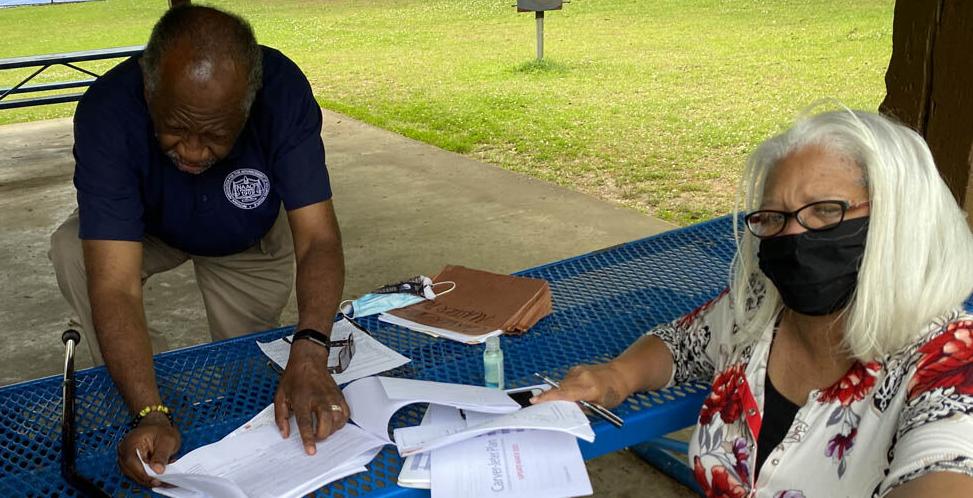 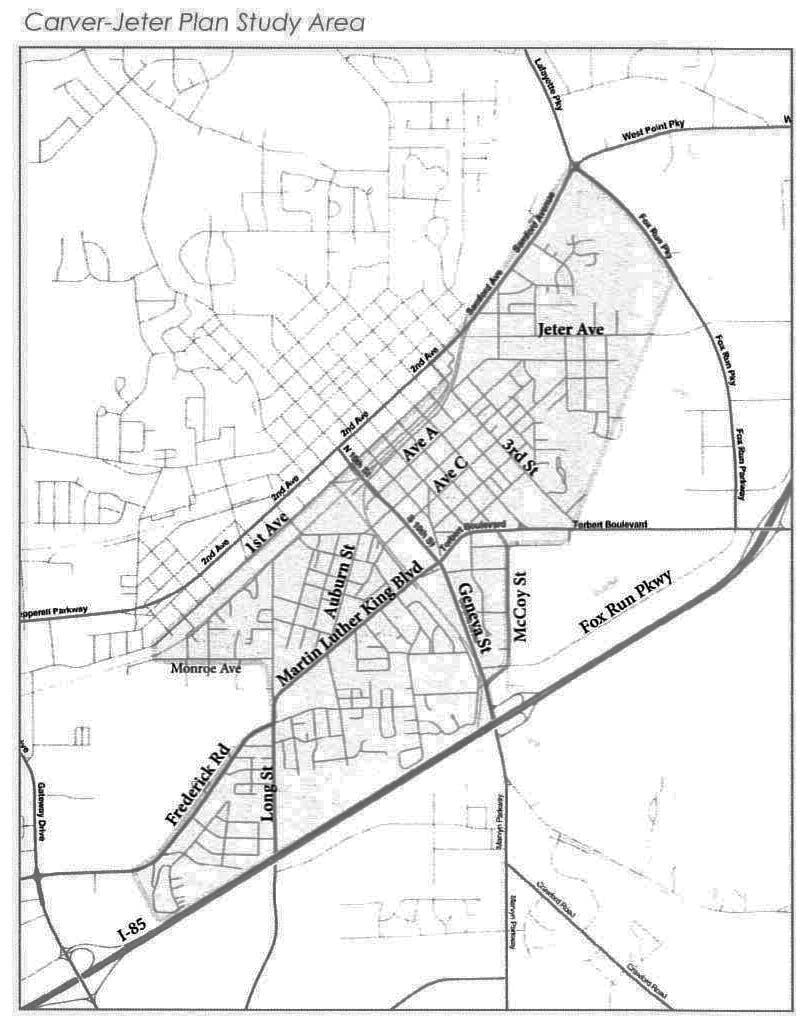 This map shows the neighbors targeted by the 2014 revitalization plan. Lee County NAACP members are soliciting input from Opelika residents on updates to the plan.

Opelika’s Carver-Jeter Area Master Plan is getting new attention from the citizens who live there.

The plan, originated by city officials and citizens’ groups in 2014, was intended to revitalize those areas of Ward 1 and Ward 2 that had fallen into neglect, along with Opelika’s downtown.

Downtown Opelika has enjoyed a renaissance, with multiple shops and restaurants opening up in recent years; however, the Carver and Jeter neighborhoods continue to lag behind.

They met in March with City Planner Matt Mosley to get an update on the plan’s progress, and now they are gathering citizens’ input on what needs to come next.

“We want to let the residents in Carver and Jeter and those neighborhoods to know that we are going to give a report back to the city of Opelika and, in that report, we are going to prioritize projects that they identify as the most important to be done,” Allen said last week. “…We are not going anywhere. We are going to make sure we support, assist and monitor this plan.”

There have been improvements over the last several years. The city council recently approved a plan to build a new, bigger $12 million public library. There has also been street art and beautification efforts, some removal of abandoned houses, establishment of a community garden and sidewalk repairs; but many of the initiatives have not been realized due to a lack of money and/or volunteers willing to spearhead the work.

That appears to be changing. Parker Hamilton is leading an ad hoc committee to work with the city on execution of the plan. She, Allen and city council members George Allen and Erica Baker Norris met with Mosley, who committed to publishing regular updates on the plan’s progress.

The first update is posted on the city’s website: www.opelika-al.gov/154/Carver-Jeter-Revitalization-Plan.

“So now, we’re about the business of talking to residents, looking at it and saying, ‘OK, what does this really mean? What does it say? What’s the impact and where are the results?’” Hamilton said. “…We’re asking them to respond to the plan and help us when we respond to the city, identify gaps and to help us prioritize when we respond back.”

CooperationAllen said the point is to work with the city to effect these changes, not to criticize anyone.

“We want to make it perfectly clear that we are partnering with the city; this is not an adversarial type operation,” Allen emphasized. “… We are going to work with them (city officials) to make sure this is done.”

Hamilton and Allen said this first step is to find out what people in the Carver and Jeter neighborhoods think is most urgent. They encourage residents to read the above mentioned plan update and then contact them with suggestions – email carverjeterplan.naacp@gmail.com or call or text Hamilton at 240-401-9243.

Israel strike in Gaza destroys building with AP, other media

Israel strike in Gaza destroys building with AP, other media

Lawsuit filed to hold up zoning vote in Beat 13, where Creekwood plans to operate a quarry

This article has been updated since it was first posted.

What's a ButterBurger? Find out for yourself when Culver's opens at Auburn Mall

ButterBurgers are coming to the Auburn Mall.

Plans to fill a big hole in downtown Auburn with new retail space and apartments are moving apace.

Short-term rental owners in the approved zoning districts can now apply for a business license to operate, after the Auburn City Council adopt…

So what do citizens in Lee County's Beat 13 think about zoning? New planning commission intends to find out

Lee County’s new planning commission will be busy over the next several weeks, hiring a consultant and hosting a public meeting to help figure…

Only 4 percent of the roads in Opelika are bike-friendly, but city council wants to change that

Opelika’s City Council will discuss the adoption of a bike and pedestrian pathways plan at its Tuesday worksession that’s been years in the making.

ALDOT project to replace Opelika bridges on I-85 began Wednesday

The Alabama Department of Transportation (ALDOT) is using a recent $10.8 million grant to modernize Opelika’s bridges along Interstate 85 at e…

This map shows the neighbors targeted by the 2014 revitalization plan. Lee County NAACP members are soliciting input from Opelika residents on updates to the plan.