Road work will soon begin on I-85 between Exits 58 and 62 thanks to a combination of state and federal funding secured by local law makers and mayors. 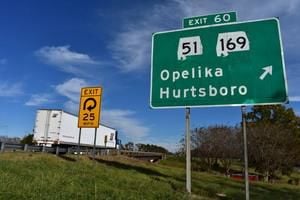 Back in 2018, Lee County Engineer John Hardee proposed a replacement of the Exit 60 interstate bridge at the Lee County Commission.

After years of wanting to improve roadways along Interstate 85, local lawmakers have secured about $45 million in federal and state dollars to begin improvements along the stretch of highway from Exit 58 to Exit 62.

The roadwork will replace six bridges along I-85 between Exits 62 and 58 and increase the length and width of all entry and exit lanes in the area, State Sen. Tom Whatley said.

Whatley said the work will improve the travel ability and safety of residents in Lee, Russell and Tallapoosa Counties by improving the junction of U.S. Highway 280, I-85 and Highway 431, and he said he believes the project will also provide jobs and economic growth for the surrounding area.

Whatley talked Wednesday about the effort in the late 2000s on the part of himself, State Rep. Joe Lovvorn, Opelika Mayor Gary Fuller, and Bill Ham, who was then the mayor of Auburn, to make the project happen.

“This is something that started four or five years ago, and three years ago Joe Lovvorn and myself, Mayor Fuller and Mayor Ham all went to [Washington] D.C., and even though this is in the Opelika area it benefits Auburn, this benefits Opelika and it benefits the whole Tri-County, East Alabama area,” Whatley said. “Any time you build roads and increase the ability for trucks to travel, you’re creating jobs. By having acceleration and deceleration lanes and bridges that are safer, you’re going to have businesses say, ‘It makes sense for us to locate here.’”

Fuller said the current state of the bridges and exit ramps for the stretch of I-85 were dangerous, and improvements to the road conditions have been needed for years.

“This is really significant to improve and enhance the safety of Exit 60, which in my opinion is the most dangerous entrance and exit off of I-85 of anywhere I know on that entire stretch of the interstate," Fuller said of the Opelika/Hurtsboro exit that provides access to Alabama highways 51 and 169. "There are a lot of accidents there,” Fuller said. “I’ve recommended to family members that they try not to use that exit if they can avoid it.”

The bid for the project was approved Jan. 29, according to Whatley, and Fuller said he expects construction on the project to begin in the next month or two and that it could take at least several months until it’s completed.

Despite slower travel times and increased traffic congestion expected once construction on the bridges and ramps begin, Fuller said he wanted to urge people to be patient while progress was being made.

“There’s going to be some difficulty there with traffic during the construction period, and folks are really going to have to be careful out there,” Fuller said. “Everything we try to do in the city of Opelika is in the long-term best interest of our community, so things that may be a little painful for weeks or months will end up being very pleasant for many years to come. I’d just ask folks who will be slightly inconvenienced to be patient and know that progress requires some patience from all of us.”

Funding for the project comes from a combination of state and federal dollars, including grant funds from a match between state and federal governments made possible by a state gas tax implemented two years ago and funding from the Alabama Department of Transportation’s budget for highway improvements.

“I was really proud to see [this project] go through,” Whatley said. “It’s been needed for around 30 years, and I’m glad that I was able to be a part of securing the financing to make it work.”

Opelika Democrat challenges straight-ticket voting in Alabama, one of six states to allow it

Jeremy Gray is pushing a bill during this year’s General Assembly to eliminate straight ticket voting in Alabama, a move the Opelika Democrat …

Heads up: The detour at the intersection of Farmville Road and North College is now up and running

Motorists will see signs directing them to a detour at the intersection of Farmville Road and North College Street beginning Monday.

Road work will soon begin on I-85 between Exits 58 and 62 thanks to a combination of state and federal funding secured by local law makers and mayors.

Back in 2018, Lee County Engineer John Hardee proposed a replacement of the Exit 60 interstate bridge at the Lee County Commission.