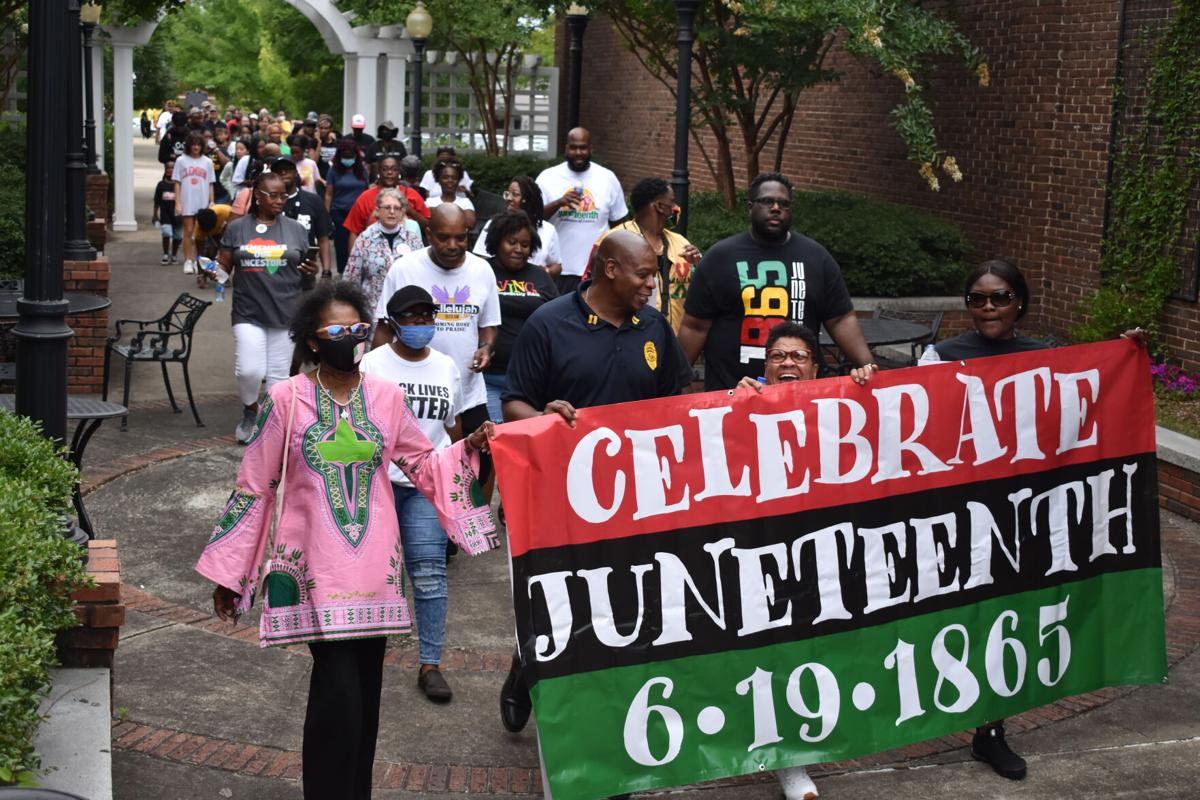 Opelika residents march through downtown to celebrate Juneteenth and stand against racial injustice on Friday, June 18, 2021. 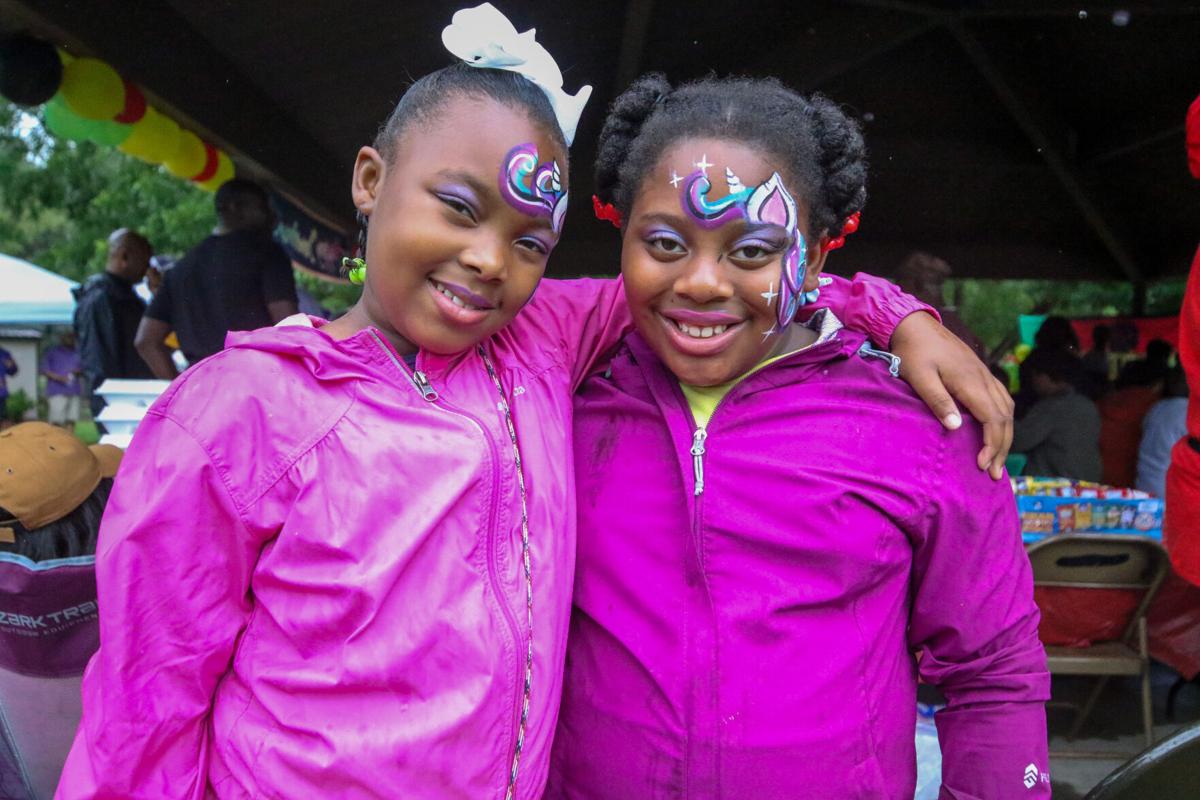 Anylah Key, 10, and Jazia Thomas, 9, pose at the Juneteenth Celebration event hosted at Sam Harris Park in Auburn, Ala., on June 19. 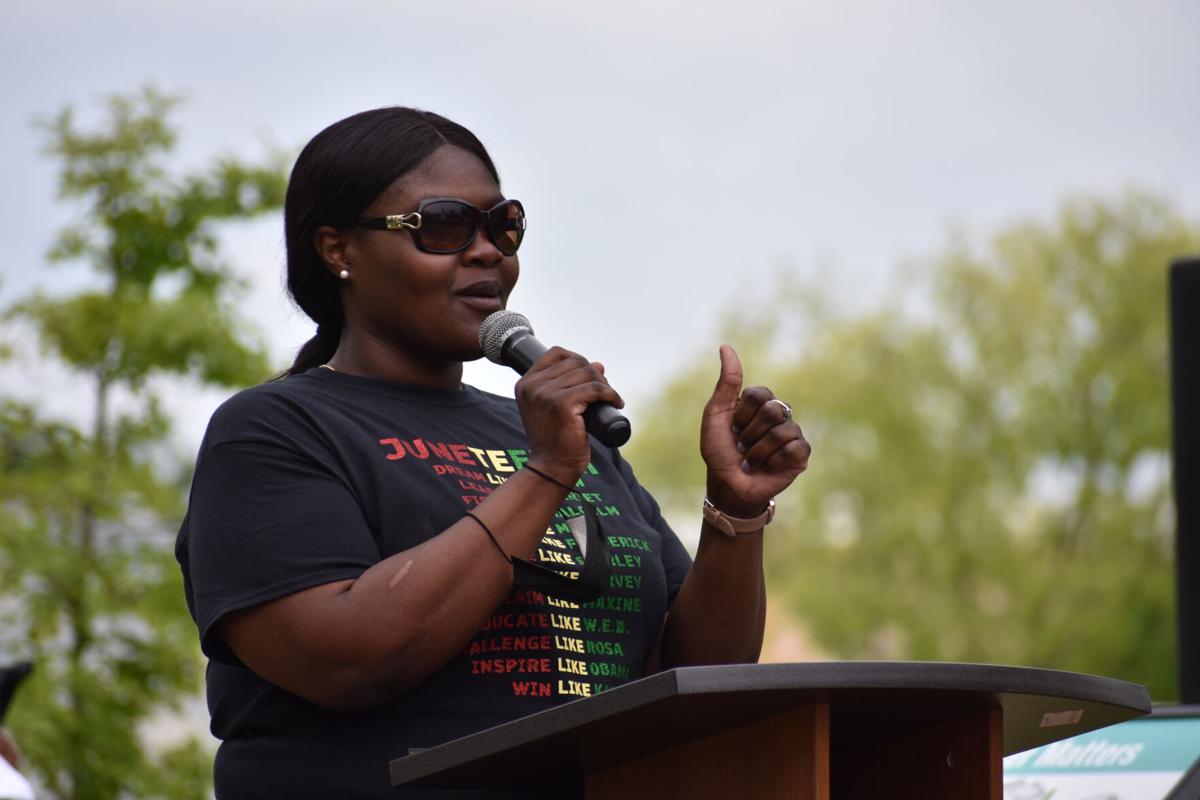 Event organizer Janataka Holmes speaks to a crowd at the city's 2021 Juneteenth event on Friday, June 18, 2021. 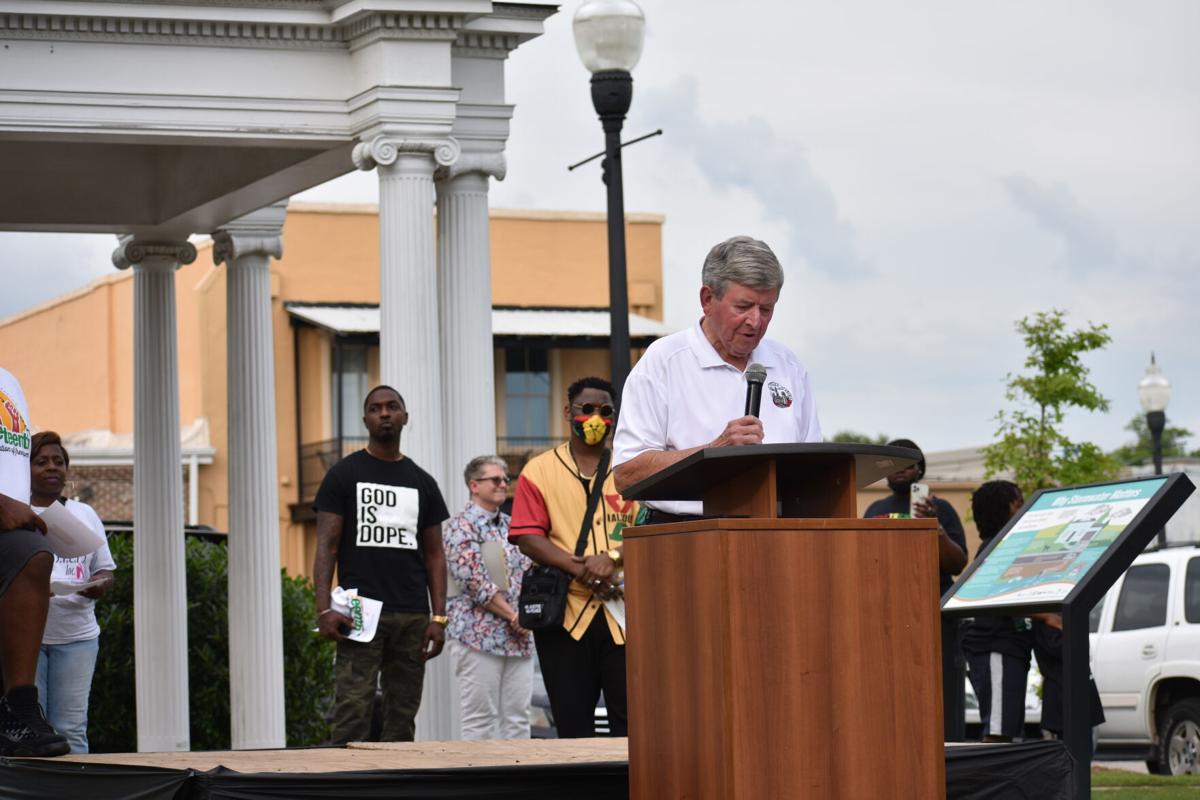 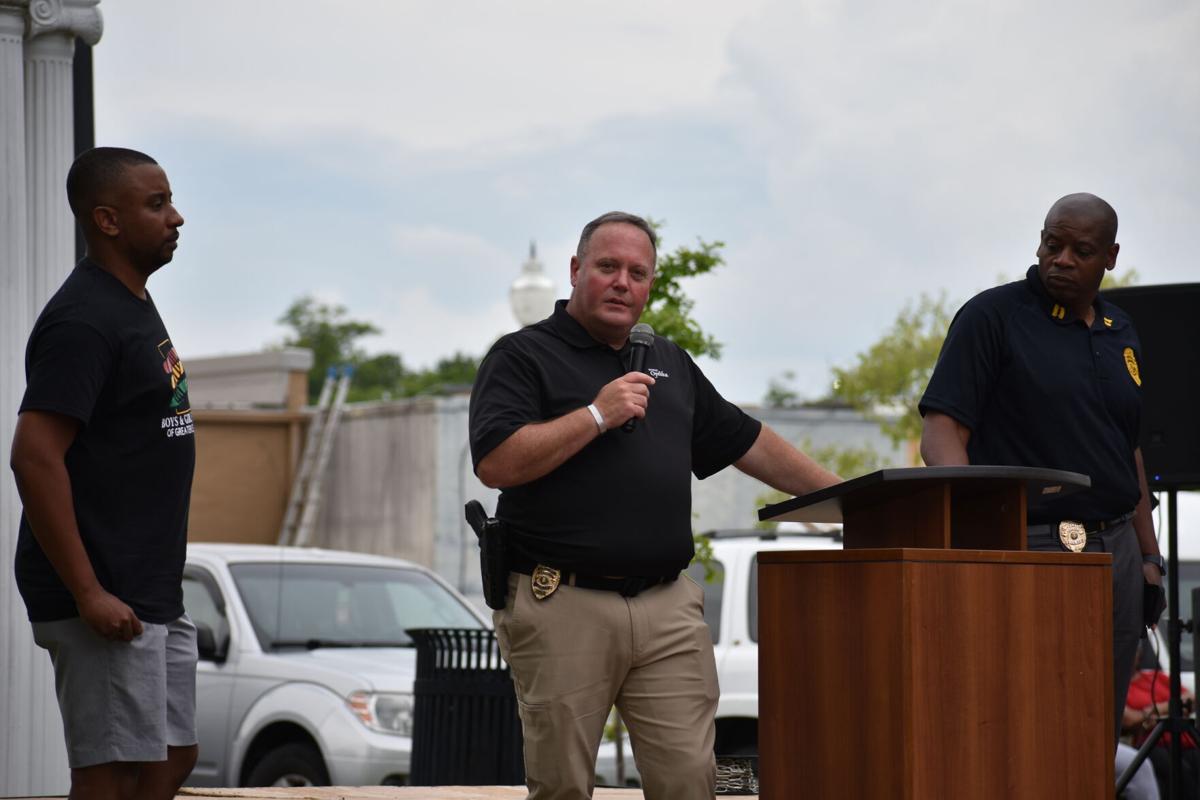 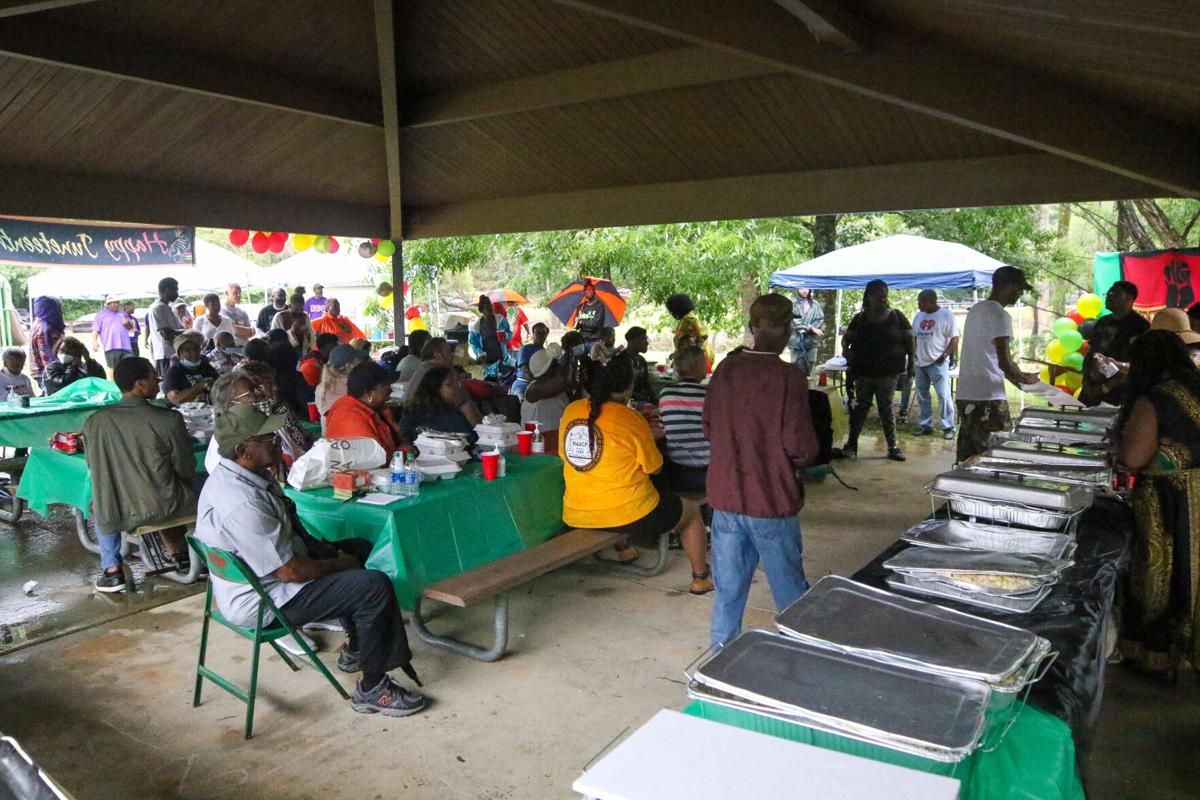 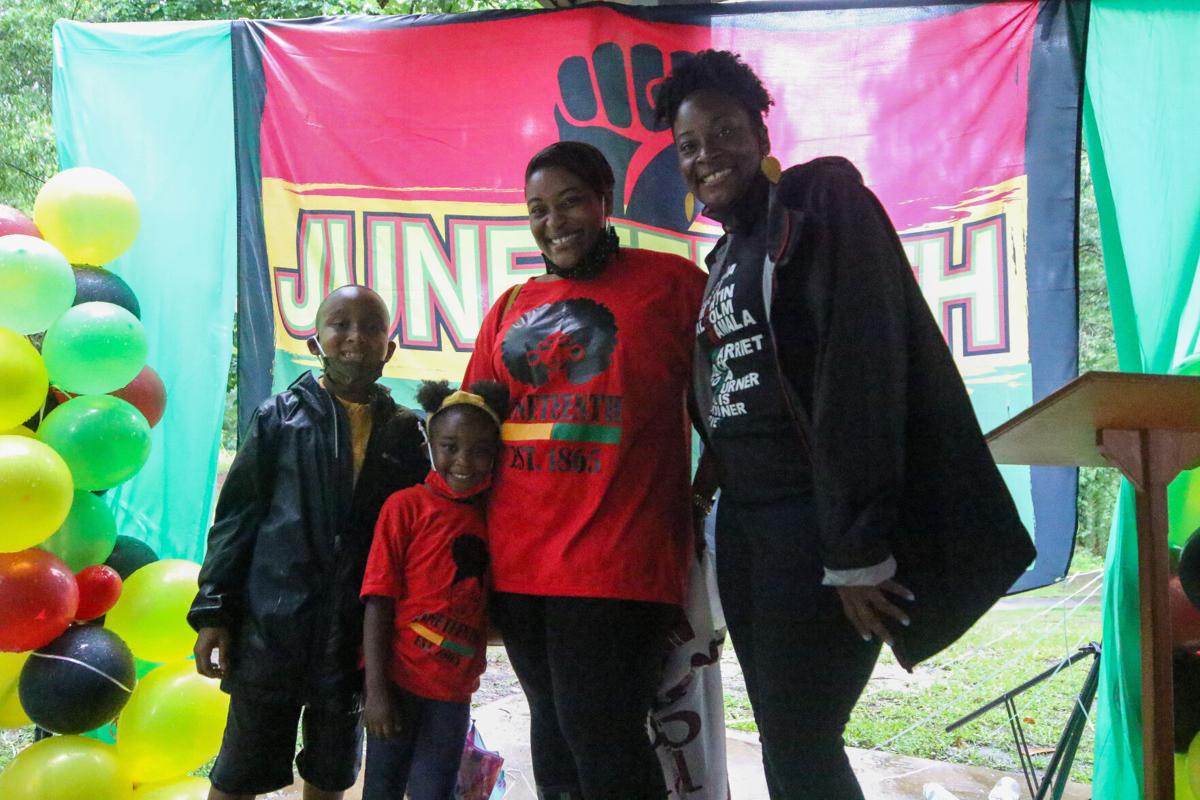 “It’s a proud day,” he said. “I’m very proud to see this turnout today. ...It’s great to see people from different neighborhoods and different races and different interests that have come here to be a part of this recognition.”

“…Today we celebrate Juneteenth. Celebrate. We have a celebration, but if us celebrating doesn’t help liberate somebody, then celebrating ain’t worth it. We’ve still got some fight we’ve got to do,” Vickerstaff said.

Sam Harris, the former Ward 1 Councilperson whom the park is named after, said he was pleased with the event’s turnout and thanked the Auburn community for attending the program, which consisted of several songs, speeches, and an excerpt from Sojourner Truth’s book “Ain’t I a Woman?”

Mayor Gary Fuller thanked event organizer Janataka Holmes and Henrietta Snipes for working hard to make sure Juneteenth was recognized in the city of Opelika and explained the historical significance the holiday had.

“Back in 1865, federal troops arrived in Galveston, Texas, to take control of the state and ensure that all enslaved people were free, and they came two and a half years after the signing of the Emancipation Proclamation,” Fuller said. “Juneteenth honors the end of slavery in the United States and is considered the longest running African-American holiday.”

Holmes, the organizer for this year’s Juneteenth, said the holiday was important both as a reminder for the historic event in which the last enslaved people were given news of their freedom as well as what it means for racial justice today.

“We can’t change what has happened in those years past, but we can remember them and honor them and we can do our best not to hold each other in captivity or bondage,” Holmes said. “Those before us paved the way, and we need to continue to make our voices heard and continue to stand for what is right and true.”

Opelika Police Chief Shane Healey spoke on the changes his department has made over the course of the last year in trying to be more involved with the public, and praised Opelika for its residents’ ability to come together.

“I remember being here a year ago with the things that were going on, and when we started talking at the Opelika Police Department about what we could do in Opelika to be different, we decided we needed everyone to come together,” Healey said. “That’s one of the special things about this city … how we come together and how we stand together through the good, the bad and the ugly.”

After the event’s speakers had finished, the community gathered behind a banner commemorating Juneteenth and marched through the city’s downtown in a long throng to showcase their unity in standing up against racial injustice and celebrating the freedom of formerly enslaved Americans.

'The good landlords are not going to have a problem': Opelika Council introduces revised rental inspection ordinance

Opelika residents march through downtown to celebrate Juneteenth and stand against racial injustice on Friday, June 18, 2021.

Anylah Key, 10, and Jazia Thomas, 9, pose at the Juneteenth Celebration event hosted at Sam Harris Park in Auburn, Ala., on June 19.

Event organizer Janataka Holmes speaks to a crowd at the city's 2021 Juneteenth event on Friday, June 18, 2021.