A passenger rail service could be coming to Auburn.

The American Jobs Plan would provide $80 billion to modernize Amtrak’s passenger rail lines to cover its repairs and expansion, the Associated Press reported.

For 45 years, Auburn was a stop on the Washington, D.C., to New Orleans line for passenger train service of the privately owned Southern Railway, The Crescent, but the train discontinued in 1970. Today, Alabama has three Amtrak stations: Tuscaloosa, Birmingham and Anniston.

The Auburn Heritage Association erected a historic marker honoring the passenger train at the intersection of North College Street and Mitcham Avenue in 2016, where the 4-6-2 Pacific Engine stopped twice daily, with one train going north and one train going south. A seafood restaurant, The Depot, now occupies the historical train station building.

The Crescent was a part of a group of three trains that connected travelers from Washington, D.C., to New Orleans. The section stopping in Auburn traveled from Atlanta to Montgomery daily.

Passengers could once more make the same Montgomery to Atlanta trek with a stop in Auburn if the infrastructure plan is approved by Congress. AL.com’s Mike Cason reports that a few of Alabama’s congressional representatives oppose Biden’s infrastructure plan.

Amtrak revealed its “2035 Vision“ — including the proposed Auburn stop — following the announcement of the American Jobs Plan. The railroad system hopes for 20 million more passengers by 2035 than the 32 million served across the U.S. in fiscal year 2019, an Amtrak Connects US flyer states.

To support the new and improved routes, Amtrak says in the same flyer it needs increased federal funding, expanded access to current infrastructure and new enforcement tolls for preference over freight trains.

Amtrak, created by Congress, not only provides passenger rail service to the U.S., but has rights to access all existing rail lines for passenger trains.

Stacey Abrams on voting rights, her next move

Stacey Abrams on voting rights, her next move

Between East Alabama Medical Center and EAMC-Lanier, 14 COVID-19 patients were hospitalized as of Tuesday morning, the highest COVID census si…

Lee County ranked among top Alabama economies in 2020, and these businesses and projects stood out

Wanted: Teens ages 16-19 to work for the City of Opelika

The city of Opelika is hiring high school students who are looking for a job this summer.

Yes, Opelika really did just name its anti-littering campaign ‘Don’t Be An Ope-loser’

The city of Opelika launched its “Don’t Be An Ope-loser!” campaign this month to encourage community members to clean up trash and discourage …

Alabama continues to see a low number of new COVID-19 cases across the state.

Ogletree Road has now reopened at the site of the culvert replacement project between Oak Knoll Circle and White Oak Lane, the city of Auburn …

When the Auburn City Council returns to in-person meetings Tuesday, the Auburn community will have an opportunity to see the long-awaited new … 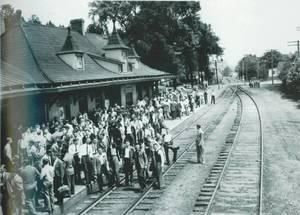 ROTC members of Alabama Polytechnic Institute (now Auburn University) stand at the Auburn Depot on their way to World War II in 1943. 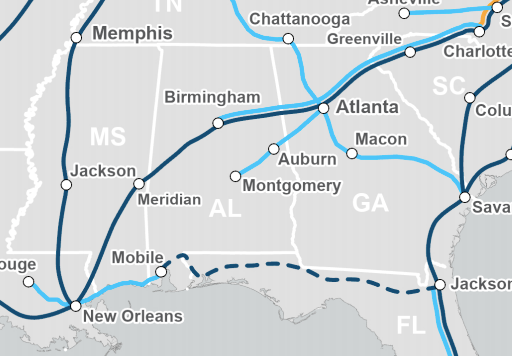 Auburn and several other cities in Alabama would be new stops for the passenger rail service if an Amtrak map released March 31 were to go into effect. The light blue line represents new services, and the navy line represents Amtrak's existing national network.