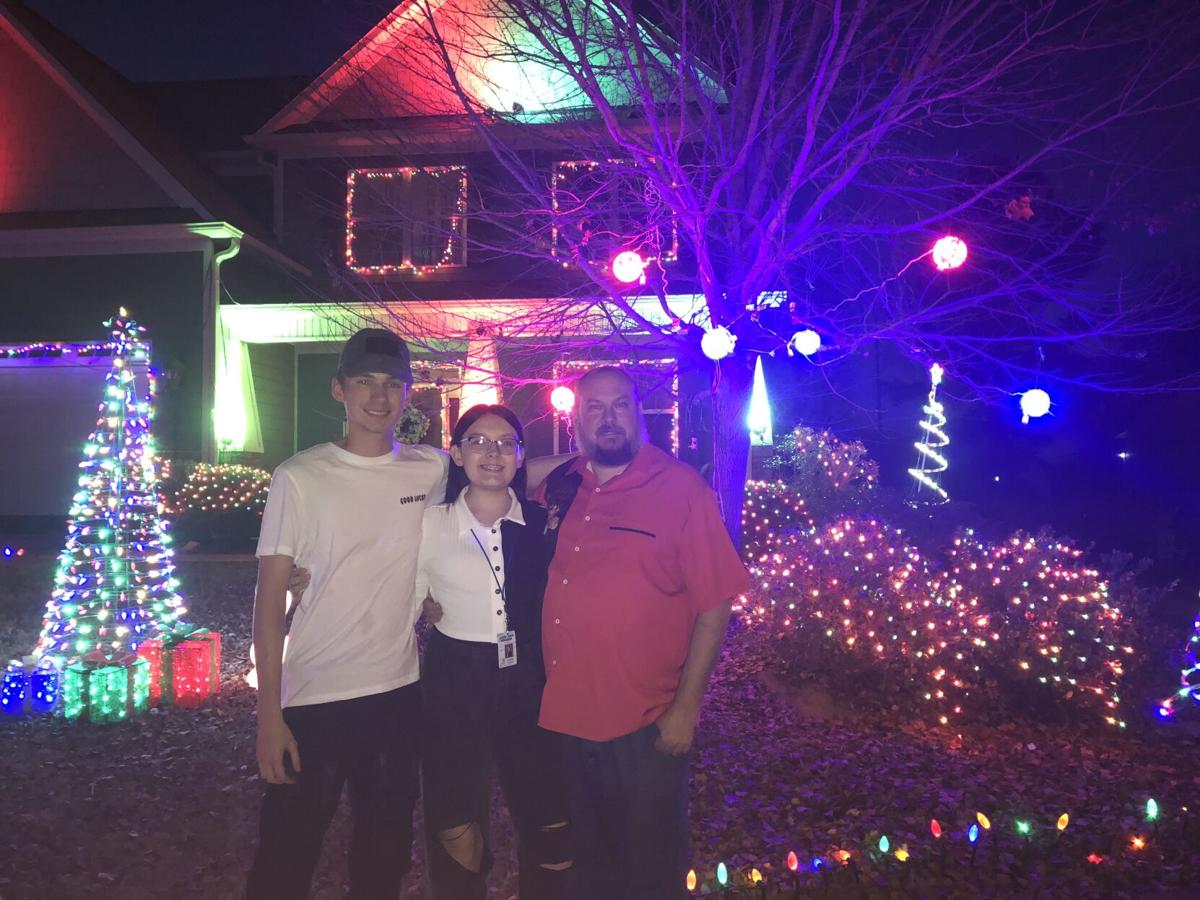 The Walker family, Robert, Harleigh and Jeff, enjoy the time they spend together planning, shopping and setting up for their Christmas light show every year.

Robert, Jeff and Harleigh Walker continue the family holiday tradition of going all out with Christmas decorations. The family choreographed and synchronized the lights in their yard to music that is played over the radio station 98.1 FM. 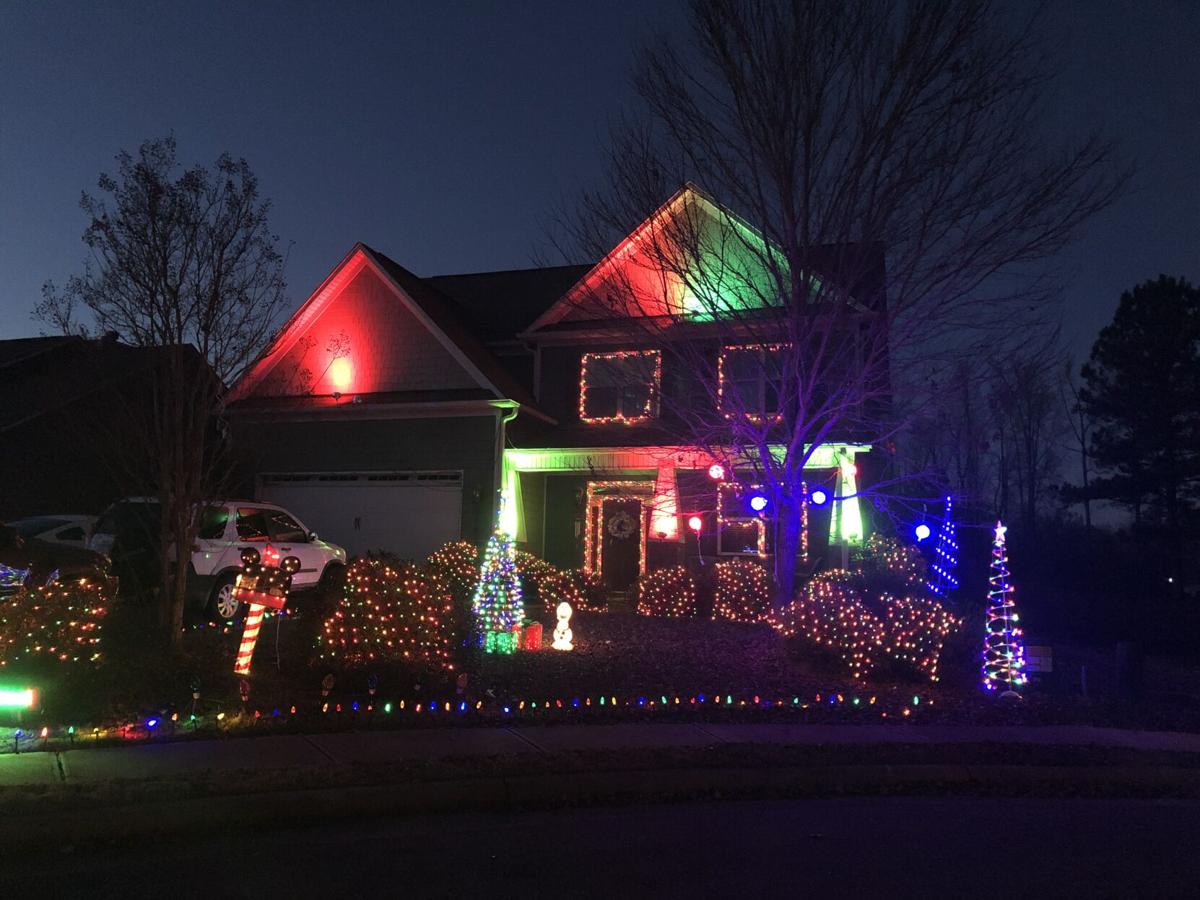 Jeff Walker got his passion for Christmas decorating from his father and has now passed on that passion to his two children. The three Walkers have made a tradition of putting on the Walker Family Christmas Light show in their yard every year.

For many Auburn locals, the house on 2078 Autumn Ridge Way is known as the Christmas House because of the Walker family’s Christmas light show, which features lights synchronized to music.

The Walker family’s passion for decorating for the holidays has passed down through generations and has led to become the tradition it is today.

“We’ve always decorated big for Christmas and had big Christmas displays,” said Jeff Walker, 46, the senior director of Information Technology at InComm Payments and an Auburn resident since 2004. “I inherited it from my dad.”

Walker remembers that decorating the house for Christmas was a big deal when he was a child, and that more people used to put out lights for the holidays.

“When I was younger, everybody drove around to look at lights,” he said. “I always wanted to be the house that people drove by.”

Once Walker started a family of his own, he followed in his father’s footsteps and continued the tradition of going all out with decorations.

SynchronicityIn 2014, Walker decided to use his IT background and step up his holiday decorations by synchronizing the lights to music, which passersby can enjoy by tuning to the radio station 98.1 FM when they enter his neighborhood.

Walker said the most difficult part of the process is the choreography. One minute of a song will take him about 90 minutes to choreograph.

Walker will reuse songs, but he likes to add at least one song every year based on what’s popular at the time.

“The year ‘Frozen’ came out, we added that song to the show,” he said. “Watching little kids come out and stand on the sidewalk singing as loud as they possible could was just great.”

Besides popular Christmas songs like “All I Want for Christmas,” the Walker family has also added the “Star Wars” theme song in the show.

This year he has 13 songs in the show with plans to add one more this weekend at his daughters request, Taylor Swift’s “Christmas Tree Farm.”

Walker said his kids Robert, 20, and Harleigh, 14, help him every year to set up the lights, think of new ideas and request new songs. His wife Lisa enjoys watching them work together, he said.

“Honestly, I couldn’t do it without the two of them,” Walker said of his children. “We try to add new elements to the show every year, whether it’s new lights, new ideas or new pieces of the display, and she (Harleigh) really loves to get involved with that part.

“My son, as he’s gotten older, is more protective of me. With the stuff on the roof, he’s like, ‘Dad, you’re not getting on the roof. I’ll do it.’”

Walker said it takes two weeks every year to unpack and set up the lights in his front yard and about four hours just to map out the extension cords.

There are about 130 extension cords of varying lengths that have to be mapped out perfectly, and about 20,000 light bulbs.

“I always look forward to it every year and I know a lot of people come to see it,” Harleigh said. “I just love that people can enjoy it as their own tradition every year.”

Robert was excited to be a part of the tradition again this year after not being able to help last year. He is in the Alabama National Guard and was on COVID relief and riot control orders last year. The family wasn’t able to see him much.

“It’s a bonding thing,” the son said. “Every time we do this, we always have fun being together putting up these lights. Being able to help this year was definitely a morale booster.”

Robert said his platoon sergeant drives down from Cullman, Ala., to see the show every year he can, and when Robert was on leave last year, three of his NCO’s came to see the lights and were impressed.

“They thought I was exaggerating how many lights we had,” Robert said.

The Walker family also does a light show in their front yard during Halloween, which they said is a warmup for their Christmas lights.

The Walker family reuses the lights and different decorations each year unless something needs to be replaced or they find something they want to add.

This year they had to replace some of the Christmas trees in the yard and some of the light-up presents. They also added light-up Christmas ball ornaments that hang from an oak tree in their yard, and they hope to add more next year.

Their other decorations include spotlights, nets on the bushes, a Mickey Mouse mailbox, an Olaf snowman and more.

When the Walkers had traditional lights, running the show increased their electric bill by $75. Now they’ve moved everything to LED, which costs less and draws less power.

Walker said it also helps that all the lights aren’t constantly on all at once, and that the biggest expense is buying the decorations.

He said people love the light show and he’s received notes in his mailbox from people who enjoy it.

“We’ll get a lot of repeat people that come several times during the holiday season,” he said.

Last year Walker was taking out the trash one night and there was a couple, dressed up for a Christmas party, standing in front of the house trying to take pictures.

Walker found out the couple was from Minnesota and was in town visiting family. They said they come to see the lights every year.

Walker said that last year during COVID having the light show allowed people to have something to enjoy while staying safe inside their vehicles.

“Little kids will catch me outside and they’ll scream out the window, ‘Thank you so much! We love it!’ That just makes it so worth it,” Walker said.

Walker said his dad also loves the light show, and because he lives far away, Walker posts videos on social media for him and other relatives to watch.

The Walker family starts the Christmas light show on Thanksgiving night and keeps it going until the second weekend in January.

“As it gets closer to Christmas, you’ll see 20 or more cars come by,” Walker said.

The lights come on around dusk and will play until 10 p.m., and on Christmas Eve, the lights will play longer.

WATCH NOW: Bruce Miller sits down to talk with Oscar nominee Diane Warren about her success

Blinken: No concessions to Russia on Ukraine

Blinken: No concessions to Russia on Ukraine

An Opelika man who was convicted of murder during the pandemic was denied his motion for a new trial.

At the Opelika City Schools Board of Education meeting on Tuesday night, the board expressed their condolences to the family of Rev. Steven Ca…

The Lee County Highway Department will be taking on a $1.78 million project this spring to replace a 63-year-old bridge on the western edge of…

Have you seen her? Police seek help in searching for Auburn woman missing since Thursday

Following 77 days, three postponed votes and a review of one alternative map, the Auburn City Council has adopted an amended version of its pr…

"May God have mercy on your souls": Auburn City Schools parents respond to news that masks likely to be reinstated

The indoor mask requirement “appears” headed toward reinstatement at all Auburn City Schools starting Jan. 18, the superintendent said at Tues…

With the month of January being Human Trafficking Awareness Month, the City of Opelika is seeking to become a Trafficking Free Zone with the h…

How do junior high boys become 'productive members of society'? Opelika rec center has a plan

Covington Recreation Center in Opelika will be offering a new program called Champions Academy that prepares boys in grades 7-9 to become men.

The Opelika City Schools teachers of the year were recognized Tuesday night at the OCS Board of Education meeting.

"It has been an honor serving the children of Opelika": Opelika superintendent announces his retirement

The Walker family, Robert, Harleigh and Jeff, enjoy the time they spend together planning, shopping and setting up for their Christmas light show every year.

Robert, Jeff and Harleigh Walker continue the family holiday tradition of going all out with Christmas decorations. The family choreographed and synchronized the lights in their yard to music that is played over the radio station 98.1 FM.

Jeff Walker got his passion for Christmas decorating from his father and has now passed on that passion to his two children. The three Walkers have made a tradition of putting on the Walker Family Christmas Light show in their yard every year.