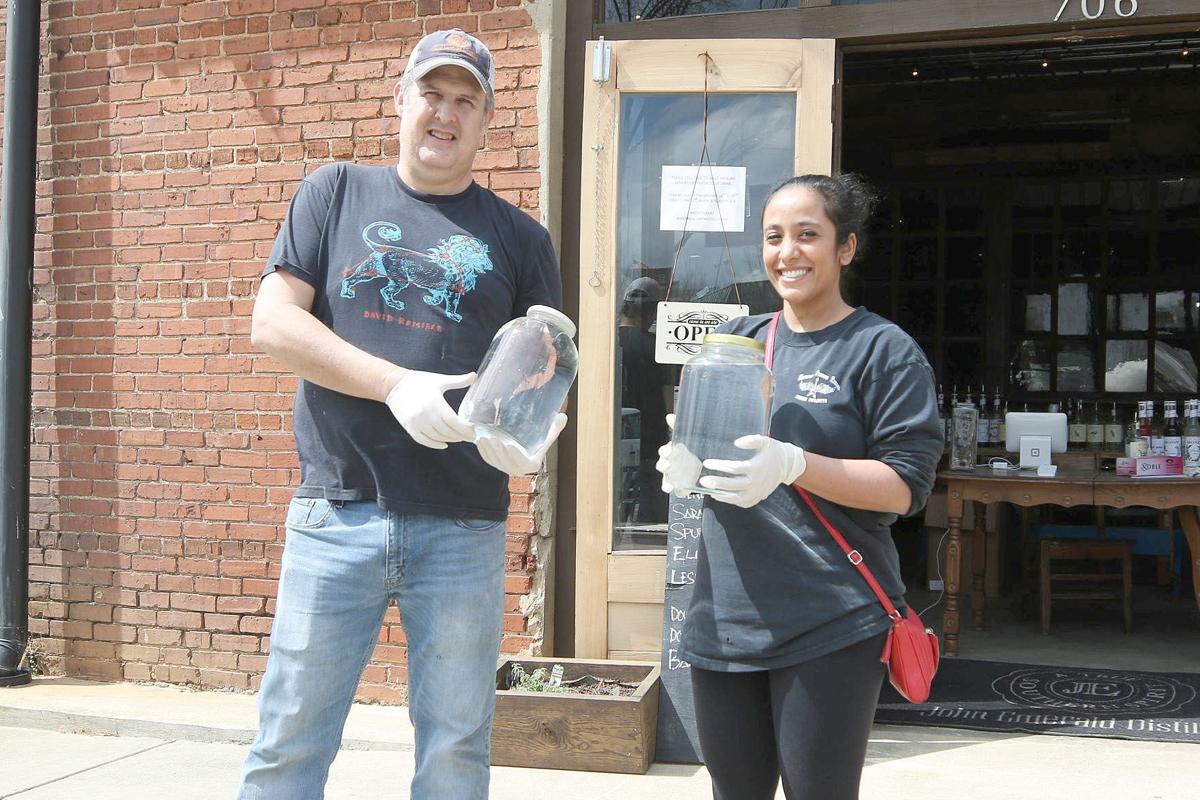 Jimmy Sharp, left, and Radhika Patel, right, hold up jars of sanitation spray. John Emerald Distilling Company made sanitation products and hand sanitizer for the community during the coronavirus pandemic. 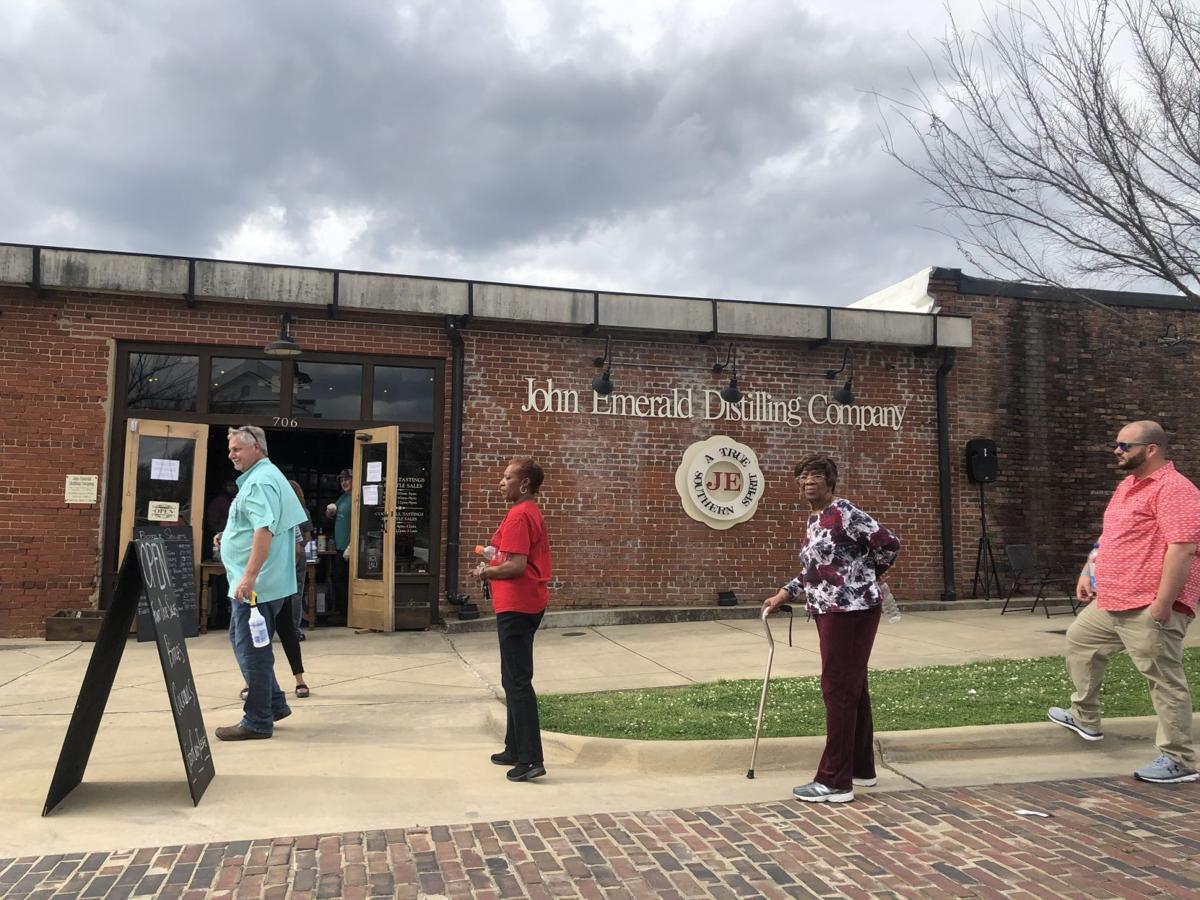 John Emerald Distillery has begun making hand sanitizer during the coronavirus pandemic. Citizens lined up outside, a few feet apart. 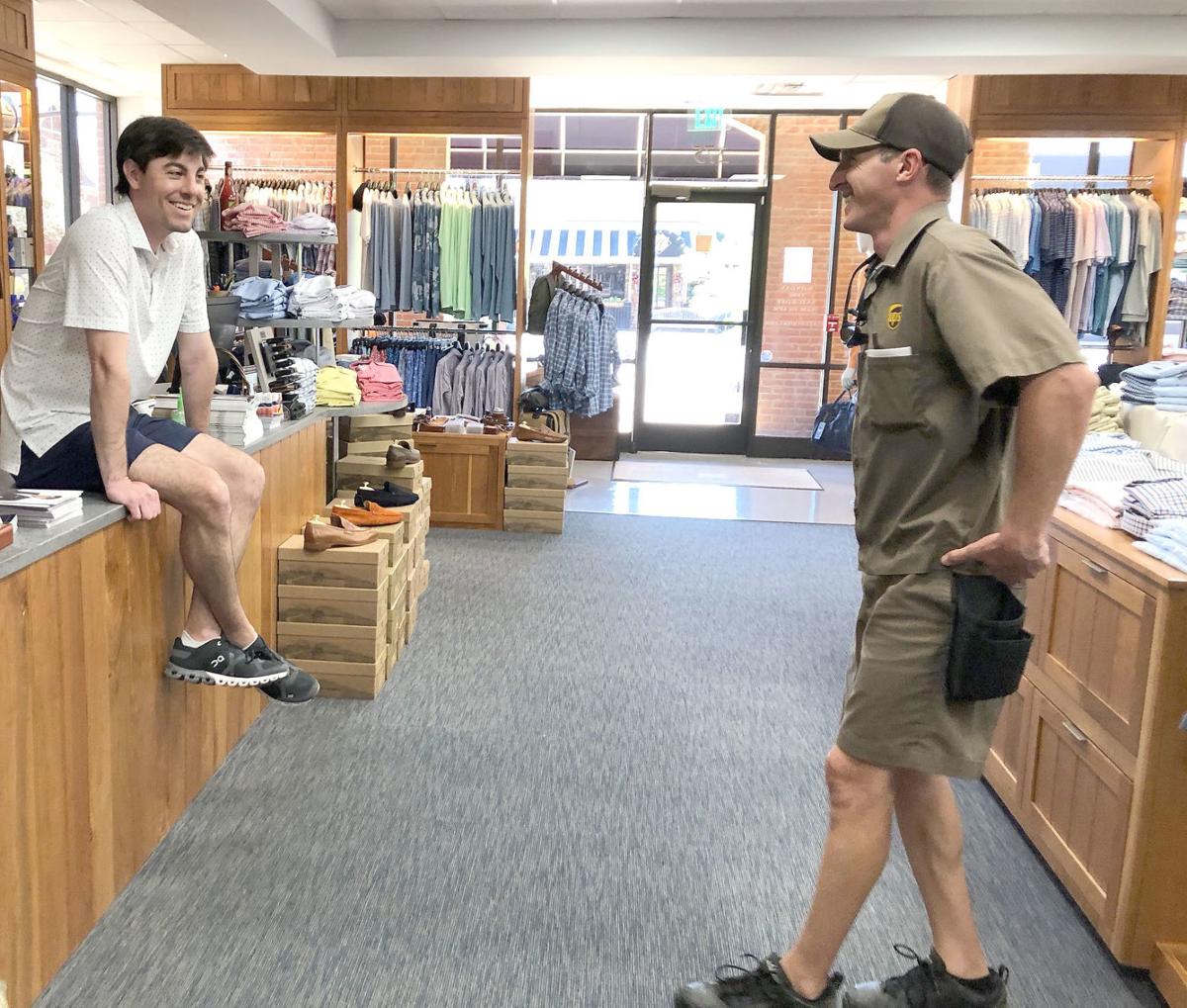 UPS driver Tucker Boswell (right) talks to Doug Caldwell about how his shop, The Locker Room, 175 E. Magnolia Ave., is faring during the COVID-19 outbreak and shutdown of the Auburn University campus. The eastside of downtown Auburn is Boswell’s usual route.

By the time Safer at Home was in place in March 2020, many of the bars and restaurants in Opelika and Auburn – including Acre, Bow & Arrow, The Hound, Amsterdam Cafe, Irish Bred, Zazu Gastropub, Lucy’s and many more – were closing dining rooms and pivoting to curbside service and delivery.

“We as a collection of chefs and restaurateurs in the Lee County community have agreed to temporarily suspend on-premise dining in our restaurants to protect our team members and local families,” Lucy’s wrote on Instagram. “We also just found out that Alabama has relaxed some ABC liquor laws and we can sell cocktails to go in sealed containers.”

The city of Auburn quickly approved a bridge loan program for small businesses, in which it paid the interest on short-term loans up to $25,000 from local banks to help businesses keep staff on and pay bills. The loans helped carry downtown retailers through a spring without foot traffic from Auburn University students, families and other visitors.

Frustrated shoppers standing in front of empty shelves were common sights at all of the big retailers and grocery stores in March and April. Supply chain disruptions for things like paper towels, toilet paper, thermometers and the aforementioned hand sanitizer became acute problems.

“We’re in a unique position that we have a base alcohol that’s 190 proof,” said Jimmy Sharp, owner and head distiller. “We thought it was a great idea and we wanted to jump. Good ideas are there for stealing so we said, ‘Let’s do it.’”

After providing sanitation products to local businesses, the Opelika alcohol distillery then pivoted to making hand sanitizer and giving it out to anyone who showed up with a container to fill.

Retail activity beyond grocery stores was nonexistent for most of April, as local, state and federal officials decided how to handle the pandemic. Congress quickly approved $1,200 stimulus payments that were paid directly to most taxpayers, which helped to keep the economy afloat.

There was the federal Paycheck Protection Program (PPP), which was swamped by businesses – small and not-at-all small – seeking help during the pandemic. The borrowers were qualified by the Small Business Administration, but loans were made through local banks.

For example, AuburnBank dispensed 423 loans in its first PPP round, which bank spokeswoman Lolly Steiner said went to Auburn and Opelika businesses employing a total of more than 5,600 people. (The bank is continuing the effort in 2021 with a second round of PPP, so far approving 225 loans to local businesses that employ over 2,800 people.)

Local retailers ranging from Southern Crossing Boutique in Opelika to Auburn’s Mellow Mushroom were able to secure the federal loans to keep going while they adjusted to the temporary realities on the ground. Some stepped up their online presences, while others made do with more delivery and carry out service throughout April and into May.

Tucker Boswell, a UPS delivery driver whose stops included downtown Auburn, was worried that his friends along the route might go under.

“I want Auburn to look the same when this is all over,” he said.

One solution Boswell and the businesses promoted was the #KeepAuburnRolling Instagram campaign. Entrants could take a picture of themselves supporting a local business and qualify for a weekly drawing for a $100 gift card to be used with a local merchant.

The merchants appreciated the efforts of the city, Boswell and others, but waiting-and-seeing was as close as any of them could get to optimism.

“I feel supported by the city and the Auburn Chamber,” said Doug Caldwell, who manages The Locker Room at 175 E. Magnolia Ave. “But honestly, there’s not much they or we can do.” Businesses were left to ride out the slump.

There were other accommodations made for citizens, too. Lee County Revenue Commissioner Oline Price pushed back the spring property tax deadline. Opelika Power Services resolved to not cut off any customers until June, allowing customers who may have been laid off from their jobs more time to pay bills.

Gov. Kay Ivey allowed retailers to reopen May 1, with limits on how many customers they could have at one time; the restrictions on restaurants and bars to takeout and delivery stayed in place for another two weeks.

The decision was less than what many citizens hoped for, but after six weeks of stasis, it was welcomed nonetheless.

“I think it’s going to be great for our retail businesses ... but it’s going to take time for some,” said Opelika Main Street Executive Director Ken Ward.

“I was pleased with it, but I wish more things could be open, like barbershops, because I need a haircut,” Fuller quipped.

John Hamner, owner of Mike and Ed’s BBQ in Auburn, was disappointed.

“You don’t really want to know my thoughts,” he said. “I think the whole thing’s a bunch of bull crap. I don’t believe this is as big an issue as it has been made out to be. It’s just going to keep our bottom line down.

“We have cut staff and done everything we can to advertise that we’re open for take-out. We have a decent amount (of take-out customers) for what we felt we were doing compared to what we’re doing now.”

Without the usual spring visitors to Auburn University, citizens came out and did their parts when Gov. Kay Ivey lifted some of the state restrictions on May 1.

College Street and Magnolia Avenue were crawling with mask-clad people that first day shops were allowed to reopen. People were walking dogs on Samford Lawn and enjoying the warm, bright spring weather.

No one was happier than Shelby Cohan, proprietor of Charming Oaks apparel store on College Street, who had about a dozen customers within an hour of opening.

“Meredith, I have never been so happy to see anybody in my life!” said Cohan to sales associate Meredith Brown, whom she had to call in to handle the rush. “We’ve had a great morning.”

Cohan said she has enough square footage to accommodate 35 or so customers under the state’s COVID-19 occupancy restrictions (no more than half full), but she still decided to close off some of her dressing rooms, steam all of the clothes and arrange to have the store disinfected every night after closing.

“I want to hug about half of these people coming in, but I can’t, obviously, and that’s difficult,” she said.

Mellow Mushroom owner Greg Bradshaw said the pizza business managed to keep staff on and ride out the last month and a half with increased pickup and delivery, as well as loan help from the Small Business Administration.

“We began by trying to survive, but we did better than that,” Bradshaw said.

Just exactly how bad it got over the course of 2020 is difficult to say. The cities of Auburn and Opelika each reported strong sales tax revenues and little or no disturbance to their services.

That would seem to point to the local retail climate not being affected, but that’s not the case either.

“It’s interesting, when you look at the overall economy – and sales tax revenues – in the city of Opelika, there was no hit,” said Ali Rauch, who took over that city’s Chamber of Commerce in mid-2020. “Tiger Town and those big box stores performed very strongly … however, the small business community did see a big drop-off in sales. They absolutely felt the pain.”

Rauch notes that several Opelika businesses are now applying to local banks for federal PPP Round 2 loans, which require that they document an overall sales drop of 25 percent from 2019 to 2020. Some applicants, like O Town Scoops on Second Avenue, took hits in excess of 30 percent, she said.

The area’s hotel business also finished down for the year. Rauch cited Auburn-Opelika Tourism numbers that showed local occupancy rates were off by a quarter, and revenues were off nearly 40 percent from 2019.

Report: Returning Syrian refugees at risk of abuse from government

These cool fins act as feet for this grumpy sea toad

These cool fins act as feet for this grumpy sea toad

Where Taliban and ex-soldiers face their wounds

Where Taliban and ex-soldiers face their wounds

Study: Earth tipped over when its magnetic poles wandered millions of years ago

Study: Earth tipped over when its magnetic poles wandered millions of years ago

Jimmy Sharp, left, and Radhika Patel, right, hold up jars of sanitation spray. John Emerald Distilling Company made sanitation products and hand sanitizer for the community during the coronavirus pandemic.

John Emerald Distillery has begun making hand sanitizer during the coronavirus pandemic. Citizens lined up outside, a few feet apart.

UPS driver Tucker Boswell (right) talks to Doug Caldwell about how his shop, The Locker Room, 175 E. Magnolia Ave., is faring during the COVID-19 outbreak and shutdown of the Auburn University campus. The eastside of downtown Auburn is Boswell’s usual route.