Zelenskyy, spirit of Ukraine named 2022 TIME Person of the Year 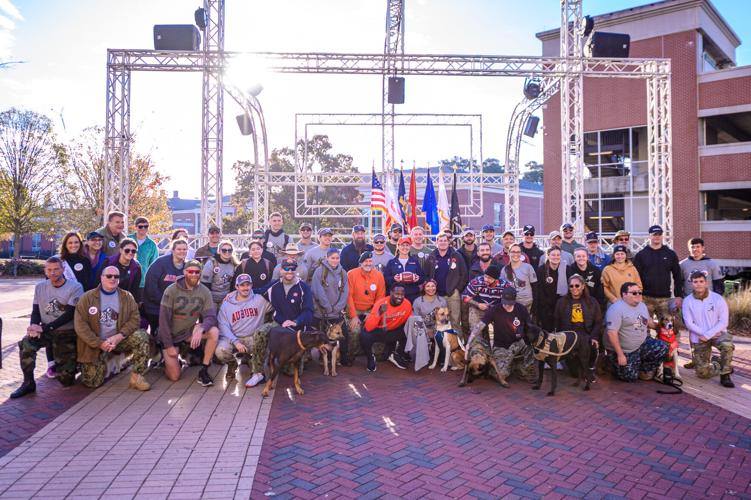 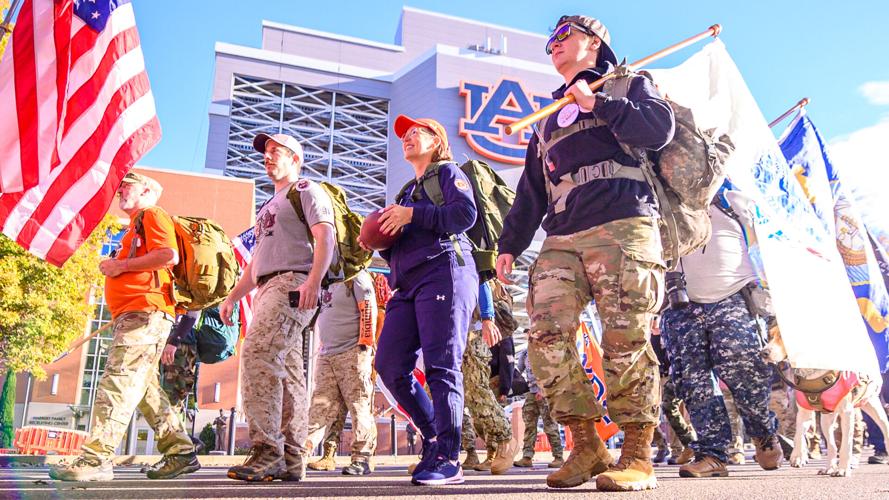 Marchers walk down Heisman Drive away from Jordan-Hare Stadium. Operation Iron Ruck on Wednesday, Nov. 23 in Auburn, Ala. 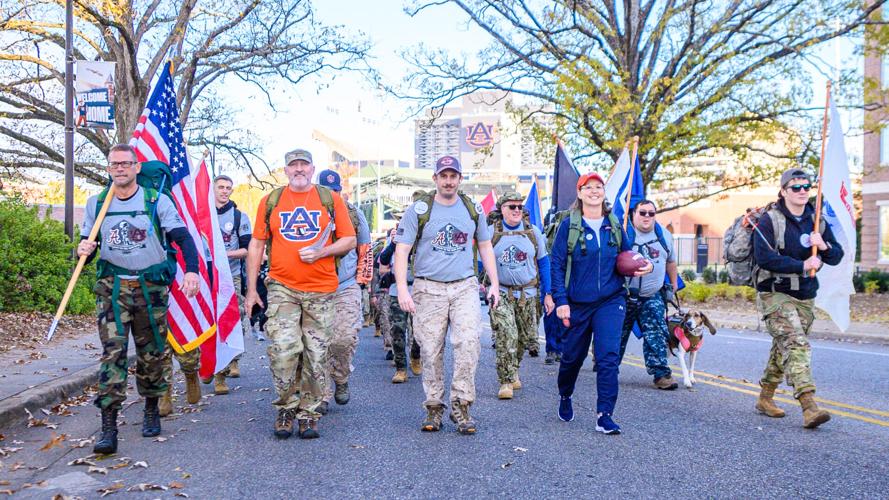 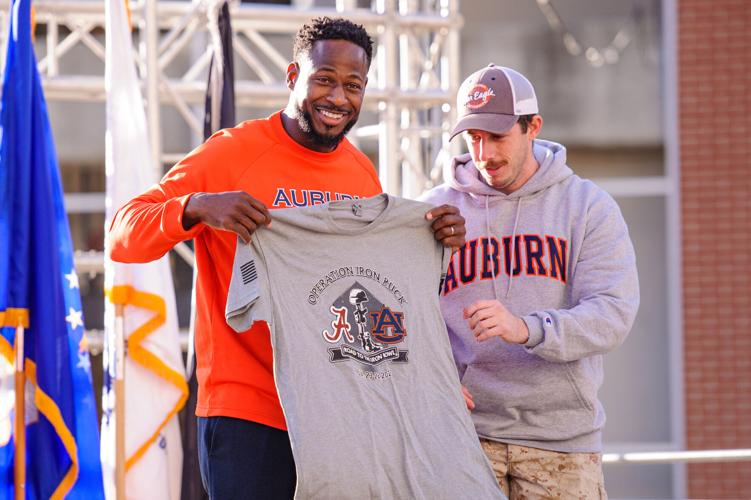 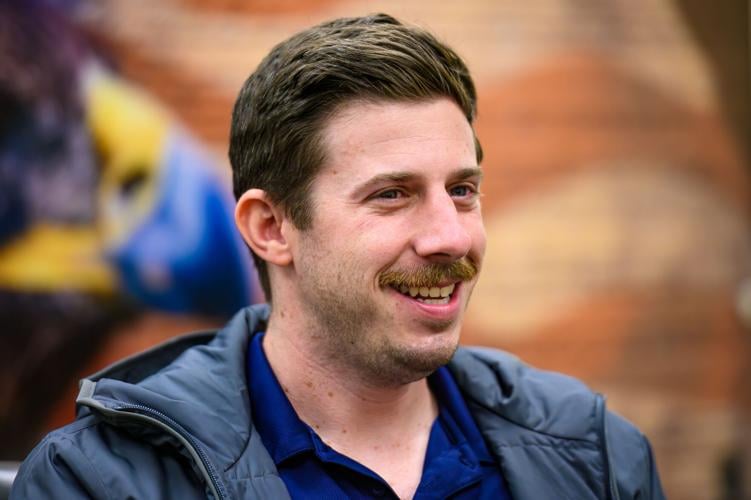 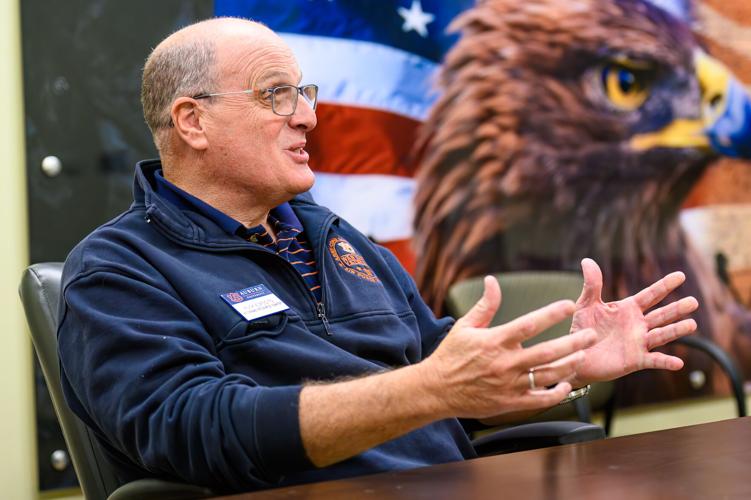 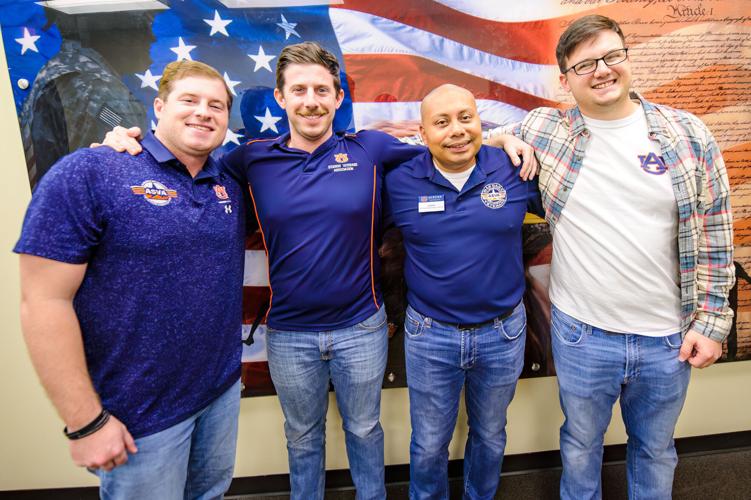 (From left to right) Preston Sanders, Clay Buchanan, Ricardo “Gunny” Garcia, and Franz Freisitzer will all participate in the 2022 Iron Ruck beginning on Wednesday, Nov. 23 in front of Jordan-Hare Stadium.

Football rivalries often push people apart. But in the case of the Student Veterans Associations at Auburn University and the University of Alabama, the biggest game in the state is bringing people together for a good cause.

Every Iron Bowl since 2018, student veterans, veteran alumni, and ROTC from the two schools have joined forces to march for veteran suicide awareness.

They call it the Iron Ruck.

And it is a grueling, three-day 151-mile hike from one school to the other where participants carry 22-pound ruck sacks and 22 nameless dog tags to honor the 22 veterans who take their own lives by suicide every day.

Participants start their march at the away team’s stadium and carry the game ball to the home team’s stadium ahead of each Iron Bowl. This year they began at Jordan-Hare Stadium in Auburn on Wednesday morning. They will arrive at Bryant-Denny Stadium in Tuscaloosa at 10 a.m. Saturday.

“It’s a collaboration where we get together and kind of use that rivalry in football and put that to the side to elevate our experiences and promote the veteran suicide problem that’s out there,” said event organizer Clayton Buchanan. “It’s not necessarily an easy thing by no means. Walking day and night, all night, every night is painful. But then, it’s a little bit of sacrifice that we can put in to remember and honor our brothers who have taken their own lives and served our country.”

The Iron Ruck began in Auburn and is organized by the Auburn Student Veteran’s Association ever year. Buchanan, 28, is a four-year Marine veteran and senior at Auburn. He is the event’s current organizer. This year will be the third time he has marched in the Iron Ruck.

“The last two years have been fantastic and hopefully we can make sure this one happens just as well too,” Buchanan said.

Puck Esposito, 58, is the director of the Veterans Resource Center at Auburn University. He’s a 30-year Navy veteran who retired as a captain and has been involved with Iron Ruck since its inception. Esposito said many people don’t realize the struggles veterans face.

“This epidemic of veteran suicide really needs to be addressed and needs to be brought to the forefront, and this is just our little part to do that, to support that cause,” Esposito said. “There are some veterans out there that really have some issues that aren’t being attended to, and 22 is too much. One is too much. The only time we should rest is when it is zero. Unless it’s zero, it’s not right.”

The Iron Ruck began in 2018 when veteran students from Auburn University and the University of Alabama decided they wanted to do something to help their fellow veterans. They used the Iron Ruck as a way to raise both money and donations for veterans organizations across the state. The Iron Bowl was played at Bryant-Denney Stadium in Tuscaloosa that year, so the students began their march at Jordan-Hare Stadium in Auburn. The 22-pound ruck sacks were full of items that would be distributed to the veterans’ organizations.

“The weight that we carry in our packs are all donated items that we collect,” Buchanan said. “Toiletries, canned goods, food, playing cards, CDs, all kinds of different things and we donate those all to different homeless veterans shelters throughout the state of Alabama.”

The Iron Ruck march is tough, but the veterans believe their effort is worth the fight. It’s a case of veterans standing alongside veterans in their struggles.

“There are people that have done this, and it has more meaning to them than just bringing attention to our 22 shipmates every day,” Esposito said. “It just helps them with their issues, their demons. Being able to be around people who get each other, people who’ve had different experiences but share the same bond of being a veteran and getting to that destination, you could see a bit of a transformation. We’ve seen that in a few people. And to me, that is one of the greatest accomplishments that this evolution has had.”

One of the high points for Esposito though, is a parking lot at a small church in Deatsville that acts as their only stop during the three-day trip.

“We have Thanksgiving dinner and other families come, my wife will come, other people’s families will come, and we get donated food and we sit around and we eat in this parking lot,” he said. “To me that’s one of my most favorite parts of it because we’ve all spent holidays in places we didn’t want to be, and this reminds us of that, except for the point that you share it with your family.”

What started as just a small group of veterans marching along the Alabama back roads has grown over the past four years. Forty people — 20 from Auburn University and 20 from the University of Alabama — are expected to take part in the march this year. Esposito said he has enjoyed seeing the growth.

“From where it started to where it is has been an incredible journey, just watching it grow from that first year where there was just a few of us creeping through the backwoods of Alabama meeting interesting people,” he said.

“They had a guy with a chainsaw run at them and rev the chainsaw at them because he didn’t know why there was 20-ish people walking on the side of the road at two o’clock in the morning,” Buchanan said.

Now five years in, the Student Veterans Associations have gained the full support from Gov. Kay Ivey and the Alabama Department of Veterans Affairs. On Nov. 16, Ivey read a proclamation for them on the steps of the Capital Building in Montgomery.

They also march with a police escort now.

“It’s nice seeing it go from just a ragtag group of people walking to now we have a proclamation from the governor and we have this support, and media attention,” Buchanan said. “We are getting way more donations than we’ve ever had, way more money donated to us.”

While Buchanan is grateful for everything the Iron Ruck is doing to raise awareness, he believes anyone can help.

“Reach out to veterans, especially around this time when it gets around the holidays,” he said. “When most people are together with family and friends, some people might feel their loneliest during this time. The biggest thing is to reach out to veterans and know that there is an issue. It’s too many a day that are currently taking their lives and it’s a problem and it’s avoidable and fixable if you just talk about it… That’s the whole purpose of Iron Ruck is to get people to talk about it.”

For more information on donating to the Iron Ruck, visit asvastore.com

This Day in History: The Washington Monument is completed

The Bordeaux region, in crisis, calls for help to pull out vines

The Bordeaux region, in crisis, calls for help to pull out vines

Shocking royal family interviews that changed the course of ‘The Firm’

Shocking royal family interviews that changed the course of ‘The Firm’

Marchers walk down Heisman Drive away from Jordan-Hare Stadium. Operation Iron Ruck on Wednesday, Nov. 23 in Auburn, Ala.

(From left to right) Preston Sanders, Clay Buchanan, Ricardo “Gunny” Garcia, and Franz Freisitzer will all participate in the 2022 Iron Ruck beginning on Wednesday, Nov. 23 in front of Jordan-Hare Stadium.