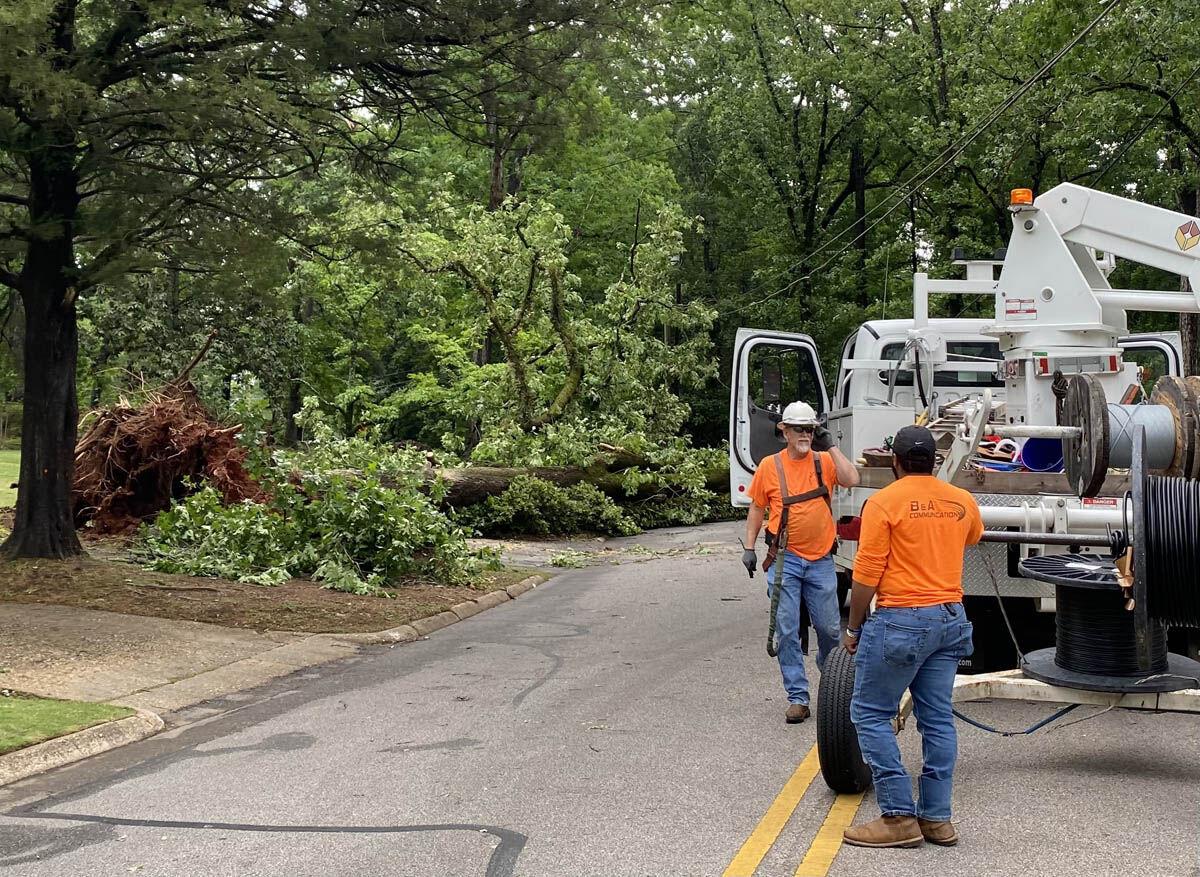 Utility crews were busy Wednesday morning cleaning up the aftermath of the heavy thunderstorms and high winds that battered East Alabama overnight. Traffic was restricted at several spots around Auburn’s Cary Woods neighborhood by downed trees and power lines. 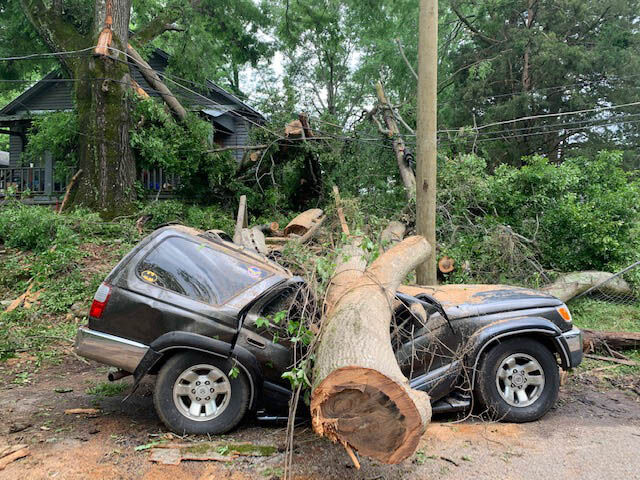 Monday night’s storm blew down several trees in Opelika, including the one that crushed this SUV on Bay Court.

The National Weather Service reported that Alexander City and Dadeville were soaked with two inches of rain overnight, but Auburn and Opelika reported less than an inch of rain. There were scattered reports of flooding around Tallapoosa County, but most of the high water stayed to the north.

Alabama Power reported that 1,000 customers in Lee County and 2,800 in Tallapoosa County were still in the dark late Wednesday morning.

Several utility crews fanned out across the Cary Woods neighborhood in Auburn, chopping up trees felled by the high winds and replacing downed power lines. No significant traffic disruptions were reported, however.

Deputy Director of Public Safety Will Matthews said Auburn city workers had a busy night, but nothing major to contend with. Station 3 on Ogletree Road lost its electricity after a falling tree knocked out a nearby power line. Service was also disrupted along College Street south of Interstate 85 after a tree fell on a power line and sparked a fire.

“It was just an active night; thankfully no injuries were reported to us,” Matthews said.

“Lightning and trees down caused us to have some wire down in a few locations and one broken pole,” she reported.

Utility work between Glenn Avenue and Stage Road in Auburn was postponed, but crews will be busy along Glenn Avenue again later this week as Alabama Power continues with upgrades to its transmission lines.

to the northTorrential rains near Birmingham dumped more than seven inches of water in a few hours Tuesday. Emergency Management officials in the area urged residents to stay off roads because so many were flooded, including some downtown.

In the Birmingham suburb of Homewood, fire department rescuers in a small boat paddled past submerged cars in a parking lot, slowly removing more than a dozen people from the waters surrounding an apartment complex.

Strong winds blowing behind a line of storms were toppling trees across central Alabama, where soil was saturated with water, and lightning struck a church in central Alabama, causing extensive damage from a fire.

A field of ice blocks on Mars was captured on camera

A field of ice blocks on Mars was captured on camera

Biden arrives in Geneva ahead of Putin meeting

Biden arrives in Geneva ahead of Putin meeting

Dozens of young black men showed up to Opelika High School Saturday for talks on policing, mental health, voting rights and more for the 4th a…

Mary Kathryn Whatley said she’s been baking as long as she can remember.

Utility crews were busy Wednesday morning cleaning up the aftermath of the heavy thunderstorms and high winds that battered East Alabama overnight. Traffic was restricted at several spots around Auburn’s Cary Woods neighborhood by downed trees and power lines.

Monday night’s storm blew down several trees in Opelika, including the one that crushed this SUV on Bay Court.