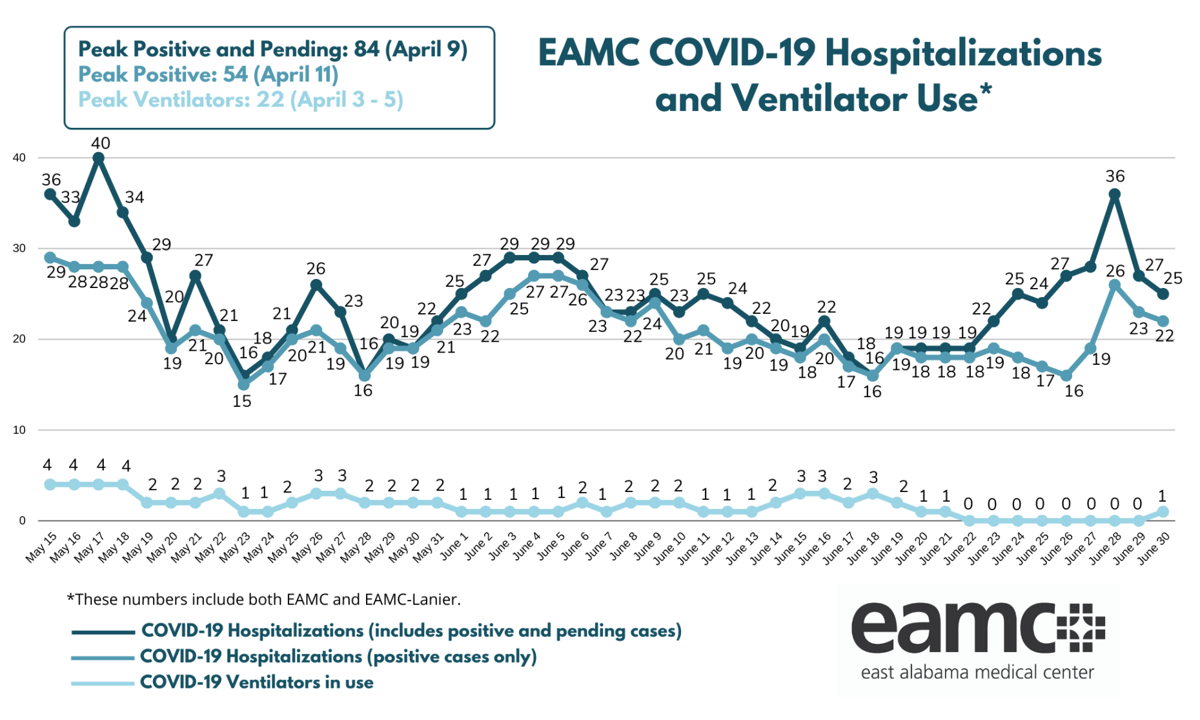 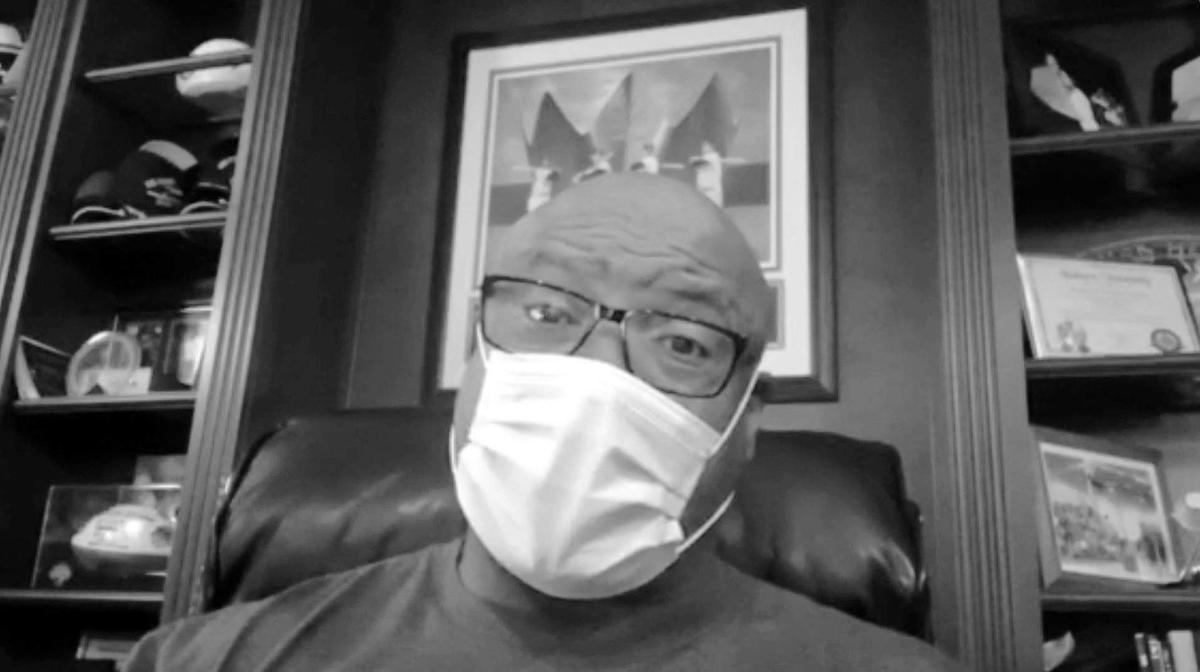 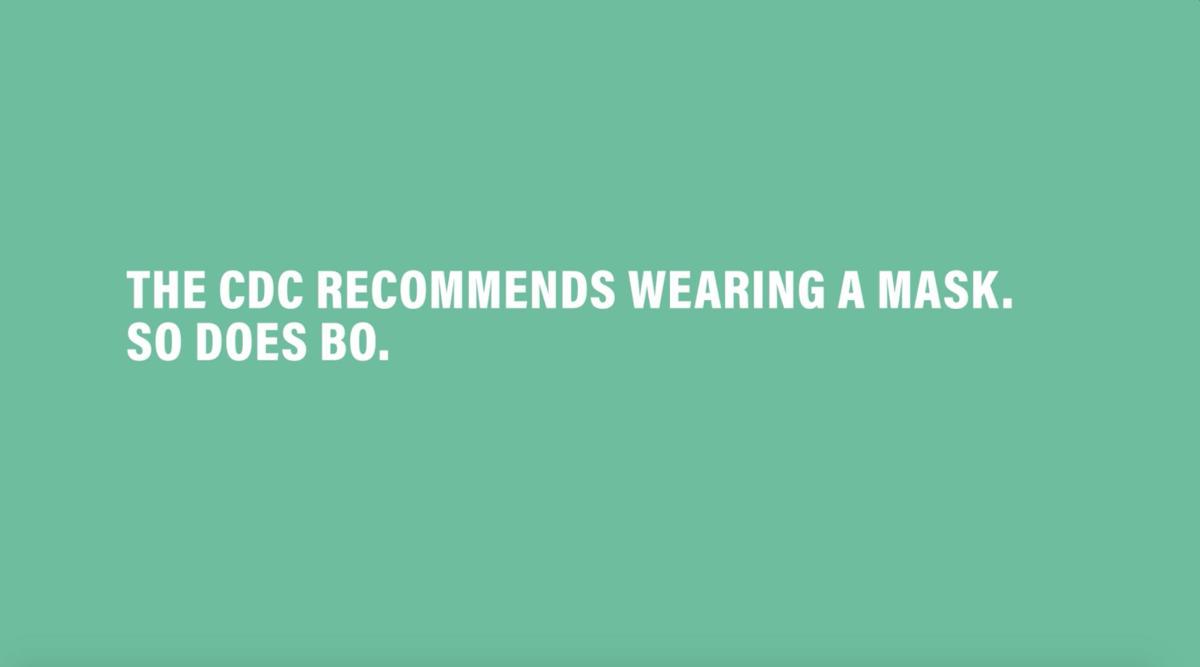 The number of confirmed virus patients is remaining steady, according to EAMC officials, but there has been an increase of hospitalized patients awaiting COVID-19 test results.

“That’s due in part to a shortage of rapid result tests, meaning some results were taking two to three days instead of less than 24 hours,” John Atkinson, spokesman for EAMC, said. “Those supplies have been replenished for now, but occasional shortages are possible in the future.”

Safer-at-HomeIvey announced Tuesday that Alabama’s Safer-At-Home order, which was set to expire Friday, is extended to 5 p.m. July 31.

“We are still in the thick of this virus disease and it is deadly,” Ivey said. “We are learning how to live with this disease and need to continue to do what we need to do to avoid another stay at home order.”

Ivey added that the state has the right to reverse course on the safer-at-home order, should the hospital crowding trends across the state continue to go upward.

“If we continue going in the wrong direction and our hospitals are not able to handle the capacity, then we are going to reserve the right to come back and reverse course,” she said.

State Health Officer Dr. Scott Harris noted that Alabama’s hospitals are reporting more confirmed COVID-19 patients than they have seen so far during the virus outbreak.

There are 715 COVID-19 patients hospitalized in Alabama and about 300 more who are hospitalized and awaiting test results.

“These numbers are higher than we have seen so far,” Harris said. “We have around 275 ICU beds remaining statewide all total.”

Jackson is seen sitting in his home in his first PSA encouraging Alabamians wearing face masks.

“Do I really need to say it,” he asks as he puts on his own face mask.

Barkley also jumped on the initiative and puts on his face mask at home, too.

Ivey and Harris have yet to require face masks or coverings in public; however, they strongly encourage people to wear them.

“When you’re in public, for goodness sake, wear a mask,” Ivey said.

“Dr. Harris and I can order you to wear a mask but it would be next to impossible to enforce,” she continued. “You shouldn’t have to order somebody to do what is just in your own best interest and that of the folks that you care about, your family, friends and neighbors.”

Harris feels that by wearing a face covering, people show that they care for others.

“The reason to do that is because you care about other people,” he said. “We know that face coverings aren’t perfect and they don’t prevent everything but we do know that they limit your chance of giving the infection to someone else if you have it and as we know many people who can spread the disease don’t even know that they’re infected.”

There were 22 hospitalized confirmed COVID-19 patients at EAMC and EAMC-Lanier on Tuesday, which is about the average number of patients hospitalized with the virus for June, EAMC reported.

Despite local hospitalizations staying steady, EAMC has seen an increase in calls to its 334-528-SICK hotline and drive-thru testing appointments.

EAMC also tested 354 people last week at its drive-thru testing sites. Of those tested, 76 were positive, which is means about 21.5 percent were positive for COVID-19, the hospital added.

The Auburn University Medical Clinic, which is a service of EAMC, increased its testing of students and the general public during June.

The clinic tested 855 last week, with 92 of the tests yielding positive results. That’s about an 11 percent positivity rate, EAMC said.

The clinic will be closed Friday through Monday in observance of Independence Day.

The increase in confirmed cases means the number of COVID-19 cases in east Alabama is rising. There were 576 confirmed cases in Chambers County, 1,167 in Lee County, 166 in Macon County, 469 in Russell County and 560 in Tallapoosa County as of Tuesday, according to the Alabama Department of Public Health.

There also were 27 total COVID-19-related deaths in Chambers County, 37 in Lee County, eight in Macon County and 69 in Tallapoosa County as of Tuesday.

New ADPH trackingADPH released a new COVID-19 statewide map that will have color-coding by county to show local alert levels.

“We’re going to use this mechanism as a way of letting you get just a quick glimpse of what is going on in your county throughout the state,” Harris said.

Counties will be red, orange, yellow or green, based on the 14-day trend of COVID-19 cases in the county.

Lee and Russell counties residents are encouraged to follow these recommended guidelines given by ADPH:

Wear face coverings where other social distancing measures are difficult to maintain.

Even when visiting family or friends, wear face coverings when within 6 feet of people outside your household.

Avoid all unnecessary travel. If you must travel, avoid crowded areas if possible.

Telework if possible. If not, maintain a 6-foot distance from others and wear face coverings at work.

Takeout, pickup or delivery from restaurants is strongly encouraged rather than dining in.

Avoid groups of more than 20 people.

Children with COVID- 19 should stay home or be sent home for school or child care if showing symptoms. Limit public interaction between children and do not allow children on public playgrounds.

The map will be updated every Friday. To view the map and get more information about the risk levels, visit https://alpublic health.maps.arcgis.com/apps/opsdashboard/index.html#/b585b67ef4074bb2b4443975bf14f77d.

Local testing siteADPH will be screening for COVID-19 at the Nazareth Missionary Baptist Church from 9 a.m. to noon July 9.

Those who qualify for COVID-19 testing if the person is a resident of a long-term car facility and the facility has laboratory-confirmed cases in residents or staff, or:

Persons without symptoms who have underlying medical conditions or disability placing them at higher risk of complications or screening of other asymptomatic people based on a case by case review and approval by the state health department or local health jurisdiction.

COVID-19 symptoms consist of either cough or shortness of breath or at least two of the following: fever, chills, repeated shaking with chills, muscle pain, headache, vomiting, diarrhea, soar throat and new loss of taste or smell, according to ADPH.

Safer-at-Home allows for the following activities — provided they abide by social distancing and sanitation rules:

Athletic facilities, such as fitness centers and commercial gyms;

Retailers and other businesses — retailers may only fill their spaces up to 50 percent;

Medical procedures, unless prohibited in the future by the State Health Officer to preserve resources;

Senior citizen centers may only host meals and offer curbside pick-up or delivery;

Hospitals and nursing homes must implement policies to restrict visitation;

Non-work gatherings must maintain 6 feet of distance between persons not from same household;

Restaurants, bars and breweries may open with limited table seating and a minimum of 6 feet between tables;

Beaches are open with no limit on gatherings, but people must maintain 6 feet of separation.

Hannah Lester contributed to this story.

Masks will be mandatory at all Opelika City Schools facilities when students, staff and faculty return to school in August.