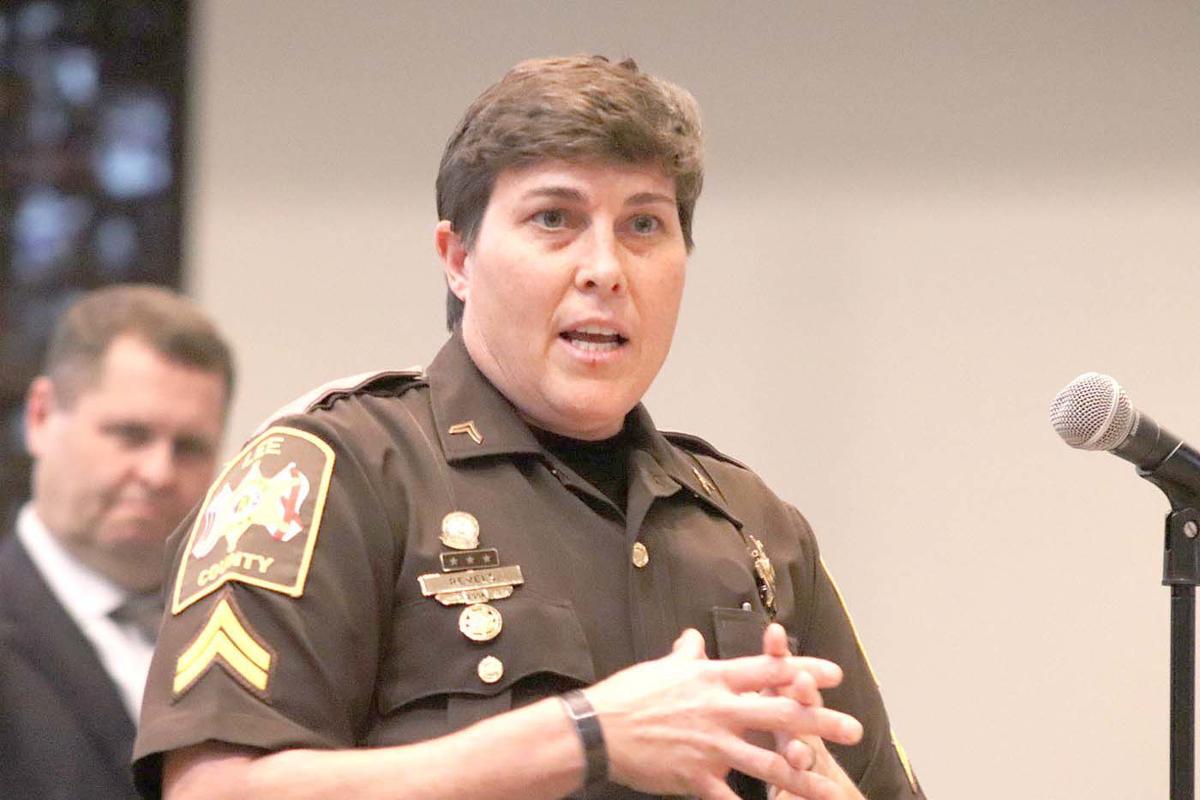 Pamela Rebels, a school resource officer in Lee County, spoke about the dangers of cellphones for youth during a sex and human trafficking seminar. 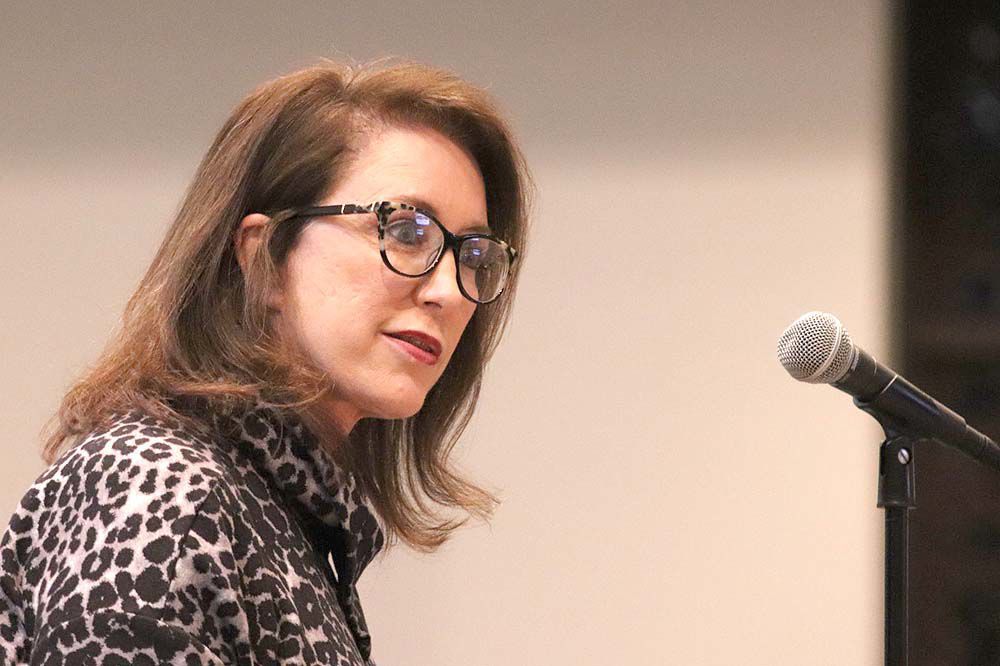 Teresa Collier, an intelligence analyst with the Alabama Fusion Center, presented a sex and human trafficking to different agencies in Lee County.

Ads are floating around the internet with photos of boys and girls who may be underage, hungry, on their own and in need of help.

Tragically, some may be victims of human trafficking — the property of a pimp and/or have run away from home.

Multiple agencies in Lee County have gotten together this year to discuss the growing problem of sex and human trafficking. The Rev. Clifford Jones of Greater Peace Baptist Church hosted the event and invited the mayors of Opelika and Auburn, the Opelika Police Department, Auburn Police Division, Lee County Sheriff’s Office and other local agencies to participate.

Opelika Mayor Gary Fuller and Auburn Mayor Ron Anders opened the sex- and human- trafficking seminar, a nod to the commitment all of Lee County to stop this problem.

“Most of us thought that slavery ended back in the 1800s with the Emancipation Proclamation, but human trafficking is a form of slavery of the worst kind,” Fuller said.

Anders said he often thinks about his daughter, who is living away from home for the first time as a freshman at Auburn.

“This subject is repulsive and it’s personal. I think about her a lot as I remind her of about where she’s going and asking her where’s she going to be and what time she’s going home and who she’s with,” he said.

Anders said that he is confident in Auburn’s campus safety, but as a father, he will continue to worry about his daughter.

The seminar was meant to educate the public about sex and human trafficking.

“It’s very important for us to be vigilant because it could be and probably is going on right under our nose and we don’t know,” Anders said.

Jones said that his daughter, Clarinda Jones-Lockhart, actually brought the idea to him for a sex- and human-trafficking seminar.

“She’s in public school and she sees a lot that is going on there, and she was convinced this was an assignment that needed to be brought to our community,” Jones said.

Teresa Collier, an intelligence analyst with the Alabama Fusion Center, presented the bulk of information for the seminar, educated audience members on how to spot a victim, how to stop trafficking and more.

The problemThe majority of Collier’s job is spent searching for suspicious activity online, she said.

“I just got a call before I came here, had a Facebook page, it was a street name of a guy that some girl had just exposed that he was trafficking her,” she said. “Then I got a call from a local agent who said, ‘I need to know who this is.’ So I’m online, looking, and I found him.”

A year ago, Collier said, she and her department held training in Auburn for officers and agencies on how to identify missing children.

“We looked to see how many troopers actually identified missing kids before we did the training,” she said. “Guess how many? Zero. Are missing kids riding around in cars with people? Yeah, they are. Since we’ve done our training, we’ve had over 25 (Interdiction for the Protection of Children) tips in ways that have resulted in kids getting rescued.”

Collier said that after the training — before 24 hours had even passed — a trooper in Mobile pulled over a vehicle with a missing child and was able to identify what was going on.

The federal law for human trafficking was passed in 2000, and Alabama’s law in 2010, Collier said, but the laws really did not show results until about 2012 because 9/11 occurred right after the national law was passed.

DistinctionCollier said there is a distinction between human smuggling and human trafficking that many people don’t realize.

Many times, human smuggling leads to human trafficking, she said. For instance, for many undocumented men and women in the country, they are smuggled here to look for work, with their smuggler charging a fee once they’re in the country.

“They come here for what they think is legitimate work and they get here and they’re told, ‘Well, you owe a certain amount of money because we brought you here,’” she said.

Human trafficking isn’t always sex trafficking. In some of these situations, the men and women are forced to continually work; they’re always behind, so they can never catch up.

PovertyThere are other reasons why men, women and children may be exploited, such as socio- economic status.

“There are a lot of kids that are expendable within their families,” she said.

Many children in poor situations at home, with families that consider them expendable, runaways. They often run to someone who may victimize them.

“Those kids don’t really have a way to make money, a lot of times they have to do things that they don’t like to do in order to get food, to get shelter,” she said. “So a lot of times what we see are those runaway kids, they’re engaging in survival sex.”

This is human trafficking on the part of the individual giving the children something in exchange for sex, whether it be food or shelter, she said.

Collier saw a situation where a mother left her two children alone so she could take a vacation with her boyfriend. The oldest of the two girls decided she would do what she needed to do so the two could eat.

She gave sex in exchange to an adult who could feed her and her sister.

Collier explained why human trafficking is often prevalent along the interstate systems.

Interstate 85, a busy corridor for human trafficking, cuts through Lee County. Atlanta, another major problem area, is only two hours away, he said.

“That’s where the hotels are, right off the interstate,” Collier said. “That’s where people are seeing those individuals that they feel like might be trafficked.”

Tracking the problemMany people ask Collier why sex and human trafficking have increased in recent years. For one thing, training for law enforcement agencies is more common now, which means more cases are found. Second, there are more people willing to prosecute a case, Collier said.

There are still those who are unwilling to prosecute a case as human trafficking, however, because it is easier to charge with aggravated rape or something similar, Collier said.

There are many ways to determine if a person is being trafficked. Sometimes the children who go knocking door to door selling magazines are indebted to someone.

Collier watches different sites looking for girls offering sex. Sometimes the girls have specific tattoos that give away that they are being trafficked.

“I’m looking for branding tattoos because that means that individual is owned by someone,” Collier said.

She provided an example of a sex ad that could indicate a trafficking victim.

However, the girl had tattoos visible in the ad photos such as a money bag, stars and a “Property of …’. These indicate she is someone’s property.

Task forceA major problem for Alabama is that the state doesn’t have a human-trafficking task force, Collier said.

“Other states have that — Georgia has it, Florida has it, Tennessee has it, Mississippi is getting one together right now — but we don’t have that in Alabama. So that leaves us vulnerable, doesn’t it?

It puts a lot of pressure on those individuals who might decide that it’s a whole lot riskier in Florida than it is in Alabama, let’s just go to Alabama.”

She said that this would be up to Gov. Kay Ivey’s discretion to start a task force.

Pamela Rebels, a school resource officer for the Lee County Sheriff’s Office, said it also is important to educate adults and youths in the community.

“One of the biggest ways (the youths in the community) are being taken advantage of is through this little thing right here (a cellphone),” Rebels said. “We have to be very careful. This is probably one of the most dangerous things that you could give your young people.”

Children can be victims of human trafficking through their cellphones if they are not aware and educated on the dangers, she said.

“I think this is very important for all of us, it’s very important for our community,” said Auburn Public Safety Director Paul Register. “As (Anders) mentioned, we have about 30,000 kids up there that we feel like while they’re here to get an education at Auburn, we become responsible for them.”

Pamela Rebels, a school resource officer in Lee County, spoke about the dangers of cellphones for youth during a sex and human trafficking seminar.

Teresa Collier, an intelligence analyst with the Alabama Fusion Center, presented a sex and human trafficking to different agencies in Lee County.