The new icon for the Opelika City Schools logo is a simple seal that represents books with a bookmark and a graduation cap. 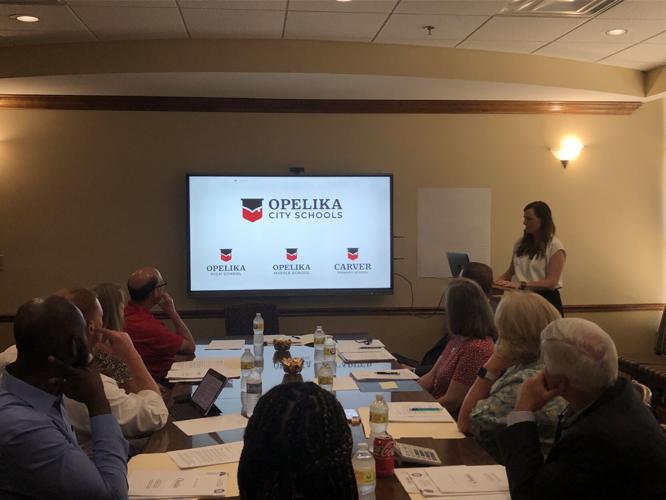 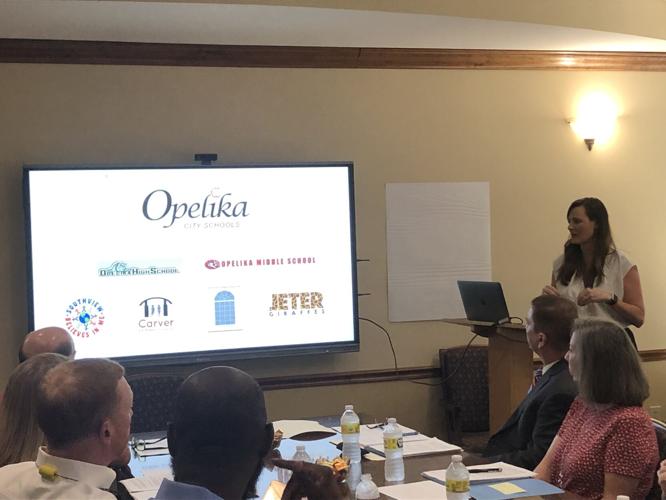 Katy Doss, owner of Here Molly Girl, shows the current logos for each school in the Opelika school system to board members on Tuesday.

The Opelika City Schools Board of Education is moving toward establishing a new logo and new branding video for the school system.

Katy Doss, the owner of Here Molly Girl, an Auburn marketing firm with plans to move to Opelika, presented the new logo and promotional video for the school system at Tuesday’s regular meeting.

Doss has been working for about six months with Becky Brown, director of public relations for OCS, to develop a new branding campaign for the school system, and they believe their final product honors the tradition of the system.

Each school in the system had its own logo, and they were “kind of all over the place,” Doss said.

She said the goal was to create “cohesion” between the different schools and create a sophisticated look that “reflects the quality of education that students are receiving here.”

The new icon is a simple red-and-black seal representing books with a bookmark on the bottom and a graduation cap on top, and the slogan will continue to be “Educating every child, every day.”

“We want not only the schools to feel connected with each other, but we want the students, faculty and staff to all feel like they’re part of a greater system,” Doss said. “When every school has something completely different they don’t necessarily feel like they’re a part of something bigger.”

Brown said it’s been more than 15 years since the current logos were established, and that the new logo should work for years to come.

Besides the new logo, OCS is also working on a new branding video, and Doss showed it to the board members on Tuesday.

The video depicted OCS goals and beliefs, including educating every child every day, establishing close-knit relationships with students, preparing students for a bright future and helping students become well-rounded.

“This is not the end. We’ve got more work to do,” Brown said about the video. “But this is the branding. This is what’s going to be unveiled closer to the time school starts.”

The new icon for the Opelika City Schools logo is a simple seal that represents books with a bookmark and a graduation cap.

Katy Doss, owner of Here Molly Girl, shows the current logos for each school in the Opelika school system to board members on Tuesday.