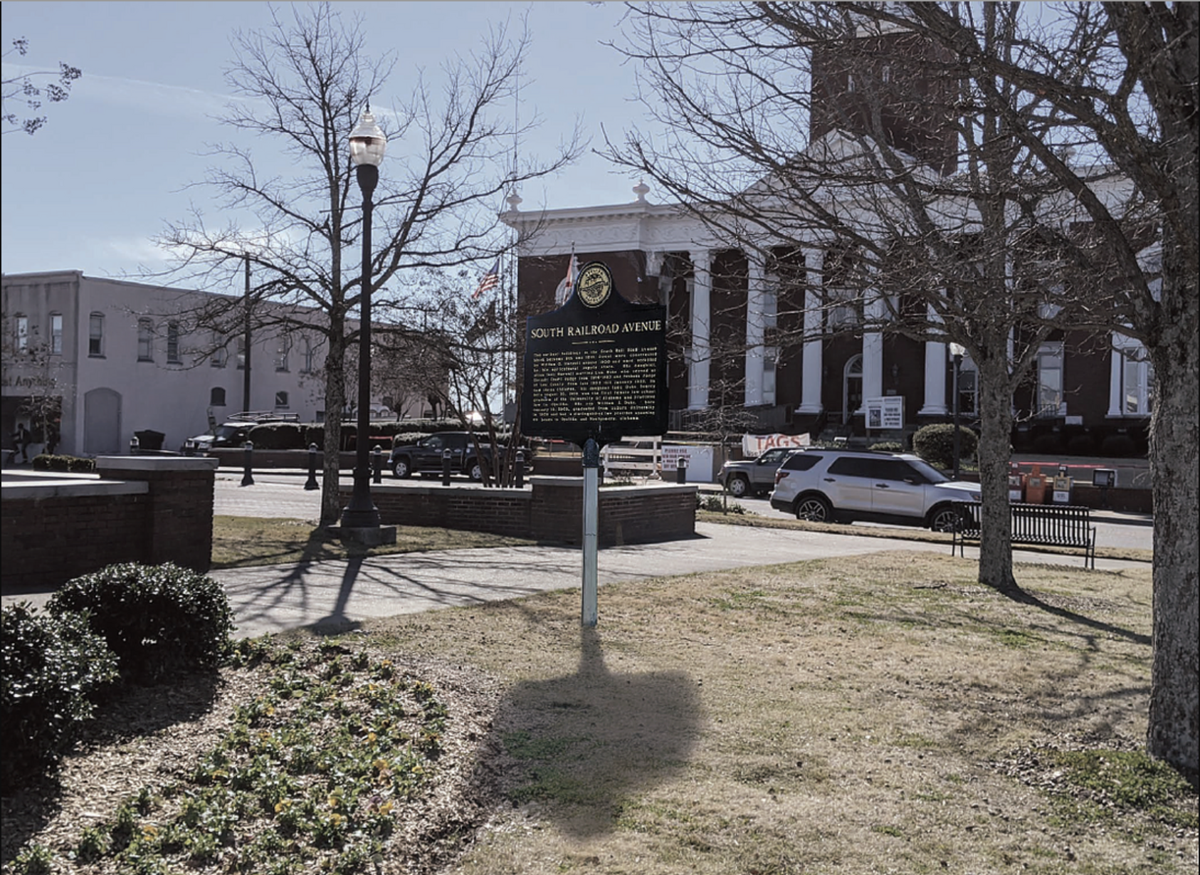 One of three potential locations for the new historical marker proposed by the Lee County Remembrance Project in Opelika. 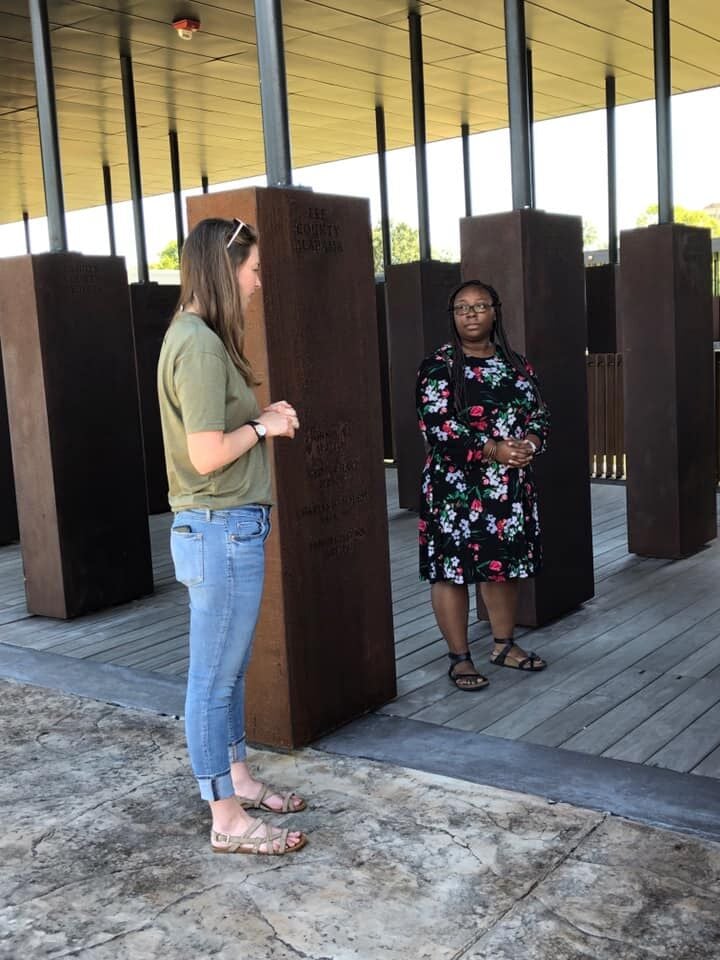 Olivia Nichols (left) and Ashley Brown (right) at the National Memorial for Peace and Justice in Montgomery.

Communities across the state of Alabama have had their dark share of racially motivated violence as white mobs lynched over 360 African Americans from 1877 and 1950, and Lee County is no different.

According to the research done by the two-woman team in partnership with the Equal Justice Initiative based out of Montgomery, the Lee County Remembrance Project has brought to light the unjust killings of four black men, and the researchers are working to make sure their stories are known.

“It started with an interest in trying to better understand what happened to the four black men who were lynched due to racial terror lynchings in our area, and we wanted to learn more about their stories,” Ashley Brown, co-founder of the Lee County Remembrance Project, said. “We wanted to learn their stories not only for us to understand, but also to better educate the community and let them know what occurred to these men.”

In 1886, cousins John Moss and George Hart were a part of a search party to find the body of a missing white man in Waverly, and upon finding him, a white lynch mob formed and accused them of murder. On Nov. 3 of that year, Moss was tortured before he was hanged and his body burned despite his pleas of innocence.

In 1887, Hart was taken to the Montgomery jail for protection before being returned to Opelika to stand trial, but on Nov. 5 of that year, an armed mob kidnapped him from the county jail after hearing there was insufficient evidence for a conviction and hanged him on the same tree as his cousin. The mob also placed a placard on his body that read, “This negro was hung by 100 determined men; whoever cuts him down will suffer his fate.”

During the period of overtly racist oppression of black people in the Jim Crow era following the Confederacy’s defeat and surrender to the United States, thousands of black people were murdered. In Lee County on Nov. 3, 1902, a white mob seized Samuel Harris, a black man who was picking cotton in a field, after two white women reported a robbery in nearby Salem. With no evidence implicating Harris, over 125 white men shot him to death and arrested his pregnant wife Beatrice as an accomplice, though her fate is unknown.

On March 17, 1900, a white teenager reported being startled after seeing Charles Humphries, a black employee of her father, in her room. The next morning a mob of white men went to his home in Phenix City and shot him over 40 times.

These are only the stories in Lee County, and they are the ones Brown and Lee County Remembrance Project co-founder Oliva Nichols want to tell.

“As a mental health counselor, one of my focuses is trauma, not only in how it is passed but how it is passed down from generation to generation,” Brown said. “Addressing that trauma means we have to acknowledge what happened, and that’s really what we highlight and emphasize.”

Nichols said the use of violence was at the root of racial oppression in the past, and those same systems of oppression reverberate into today.

“We don’t often talk about the mechanisms that sustained and created these separations in Jim Crow, and we certainly don’t like talking about such horrific violence that was used as the primary means to create those divisions that have huge legacies today,” Nichols said. “It was using trauma and violence to enforce Jim Crow laws and segregation and this racial hierarchy that then shapes our neighborhoods, our opportunities and our access to schools and healthy behaviors, and even small things like accessibility to parks and greenspaces and the distance to a healthy food market.”

Along with educational efforts, including the creation of a booklet detailing racial injustice in the South and a high school essay contest and scholarships, Brown and Nichols are in the process of erecting a historic marker near the Lee County Courthouse in Opelika that details the victims of racist mob violence in the area.

After meeting with Opelika Mayor Gary Fuller and presenting their plans to the city council earlier this month, the Lee County Remembrance Project has moved a step closer towards realizing its goals and hopes to have the marker erected by the end of spring 2021, Brown and Nichols said.

“It’s important, and it’s vital that we all take a deep dive and explore the fullness of this history and also what’s going on present-day,” Brown said.

The project is also working with local elected officials to proclaim Nov. 3 a day of remembrance for the victims of racially motivated killings due to early November's violent history in past years.

“We talk about the past, and we use it to inform our future,” Nichols said. “This is part of our past, and this is a part that we often neglect because it’s difficult, it’s hard to talk about, but that means it’s especially important to talk about.”

Lee County saw its COVID-19 death toll rise by eight from Monday to Tuesday as the number of new COVID-19 cases remains steady.

Two coffee shops in the Auburn-Opelika area are temporarily closed due to COVID-19.

A 20-year-old man died after falling from the sixth story balcony of The Standard apartment building in downtown Auburn Saturday, police said.

Auburn University faculty punt on no confidence vote for Hardgrave

One of three potential locations for the new historical marker proposed by the Lee County Remembrance Project in Opelika.

Olivia Nichols (left) and Ashley Brown (right) at the National Memorial for Peace and Justice in Montgomery.