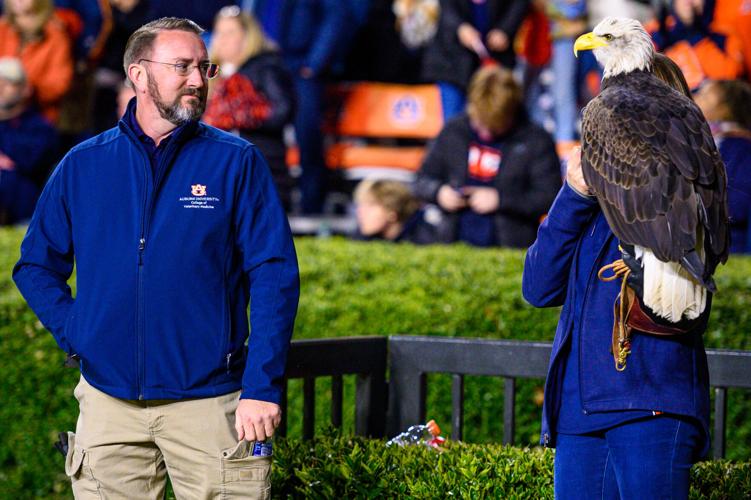 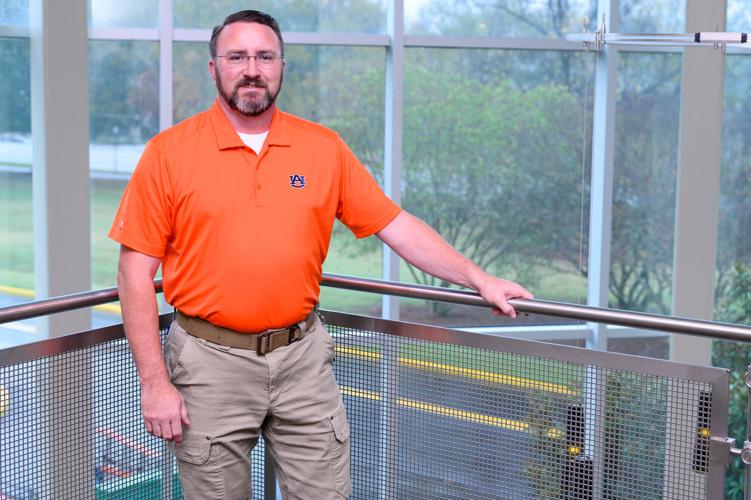 Auburn University’s Southeastern Raptor Center celebrates its 50th anniversary and looks to the future with the hiring of a new director, Wade Stevens.

For 50 years the Raptor Center has been a division of the College of Veterinary Medicine and is known for training the eagles that fly over Jordan-Hare Stadium before football games and for providing education, rehabilitation and conservation efforts for raptors.

The center rehabilitates injured and orphaned wild raptors including hawks, owls, eagles, falcons, kites and vultures and conducts educational programs throughout the Southeast promoting awareness and appreciation for birds of prey.

Stevens previously worked for the City of Orange Beach in Alabama for 26 years where he had a variety of different leadership roles in public safety and wildlife protection.

His wife Paula is a teacher at West Forest Intermediate in Opelika and they have twins, a daughter and son, who are both sophomores at Auburn University.

Stevens served four years in the Army National Guard then went into the fire service. He finished his schooling online through Waldorf University with a degree in fire science administration.

Later, Stevens became the manager of the Orange Beach Department of Coastal Operations, which is committed to preserving and restoring the local beaches, trail systems and other natural resources.

“In the fire service, public safety in general, you get called for everything, so it might be a motor vehicle accident, building fire, but it might also be an injured bird, a sea turtle, a problem on the beach, things of that nature,” Stevens said. “So, being in a coastal community with a lot of diversity, we frequently got called to injured or orphaned wildlife.”

Stevens said he found out there wasn’t much assistance available to help with those types of incidents.

He and a few colleagues then decided to start training with marine mammal groups and sea turtle groups to learn how to best respond to calls that involved wildlife animals, and Stevens said it became his new passion.

Stevens work with wildlife began around 1994 and the first animal he ever rehabilitated and released was a red tail hawk.

“Raptors were kind of the very beginning and from there it just kind of diversified into just about everything we had there on the coast,” he said. “A lot of the early work focused around sea turtle programs and marine mammal strandings.”

Stevens then helped to build the Orange Beach Wildlife Center from the ground up.

One of the projects his department worked on with Alabama DCNR, Alabama Audubon and National Audubon was the Coastal Bird Stewardship Program.

Throughout his time working with wildlife and habitat restoration, he became connected to Auburn University’s Raptor Center.

“I would transport cases up here, drop them off, call and consult with the vets here over the years and the different staff that worked here at the center,” Stevens said.

Once the position for director of the Raptor Center became available, he jumped on the opportunity.

“The program here is a great program. It’s definitely nationally known,” he said. “It’s something that, like anything else, don’t let good get in the way of great.”

Stevens plans to continue to improve the center and take the program to the next level by expanding the current facility, increasing education and outreach programs and starting their own research.

“We’re definitely looking to expand the facility, and that will include everything from our educational outreach sections, where we have an amphitheater, where we do public shows and presentations to the rehab side of things where we’re going to increase the rehab facility and the hospital facilities here,” he said.

Stevens said the current facility will be remodeled and will expand onto a parcel of land that is adjacent to the center, nearly doubling in size and creating room for more raptors.

Stevens said he wants to strengthen the eagle program for Auburn fans by bringing the eagles to more sporting events. To do this without overstressing the birds, Stevens said they will likely need to add more eagles to the collection.

He also plans to establish several research projects with one topic being focused on the causes of death of raptors in the wild, which will look at humans’ impact on them including chemical exposure, habitat loss and more.

“We’re looking at it as really a kickoff for the next 50 and what our plan is there, but at the same time paying homage to what’s been done,” Stevens said. “Some great people have brought this facility and this program to where it is today and we definitely wanted to honor that and acknowledge the 50th.”

Calvin Johnson, Dean of the College of Veterinary Medicine at Auburn, said the Raptor Center has continued to grow the mission of rehabilitation, education and public outreach. He’s excited to see what the center will accomplish under Stevens leadership and during the next 50 years.

“We have a big vision for the future of the Raptor Center in terms of continuing to advance our facilities to improve our research and to improve our teaching opportunities for students,” Johnson said. “We’re very fortunate to bring (Stevens) in because he really has a great background in rehabilitation.”

Johnson said the Raptor Center has had some outstanding directors, but most of them were part time. This will be the first full-time director in almost 20 years.

The last two years the center has been in an interim period after former director Jamie Bellah retired both as director and as the head of the Department of Clinical Sciences.

“Dr. Jamie Bellah was an excellent director of the Raptor Center,” Johnson said. “Dr. Bellah is an exceptional veterinary surgeon, and he brought this really good skill set related to surgical repair of injured raptors, whether it be broken bones or skin injuries or just general medical assessment of an injured bird.”

“Southeastern Raptor Center is already just a real jewel in the community, and we’re excited about the fact that when we finish pursuing our plans for expanding the Raptor Center and having it do more, that it’s going to be almost a destination within the Auburn-Opelika community for people who want to get the full Auburn experience to come and see up close the tremendous grander of raptors,” Johnson said.

Wade Stevens has been named the new full-time director of the Southeastern Raptor Center.

State Department says don't use Uber in areas around Cancun

State Department says don't use Uber in areas around Cancun