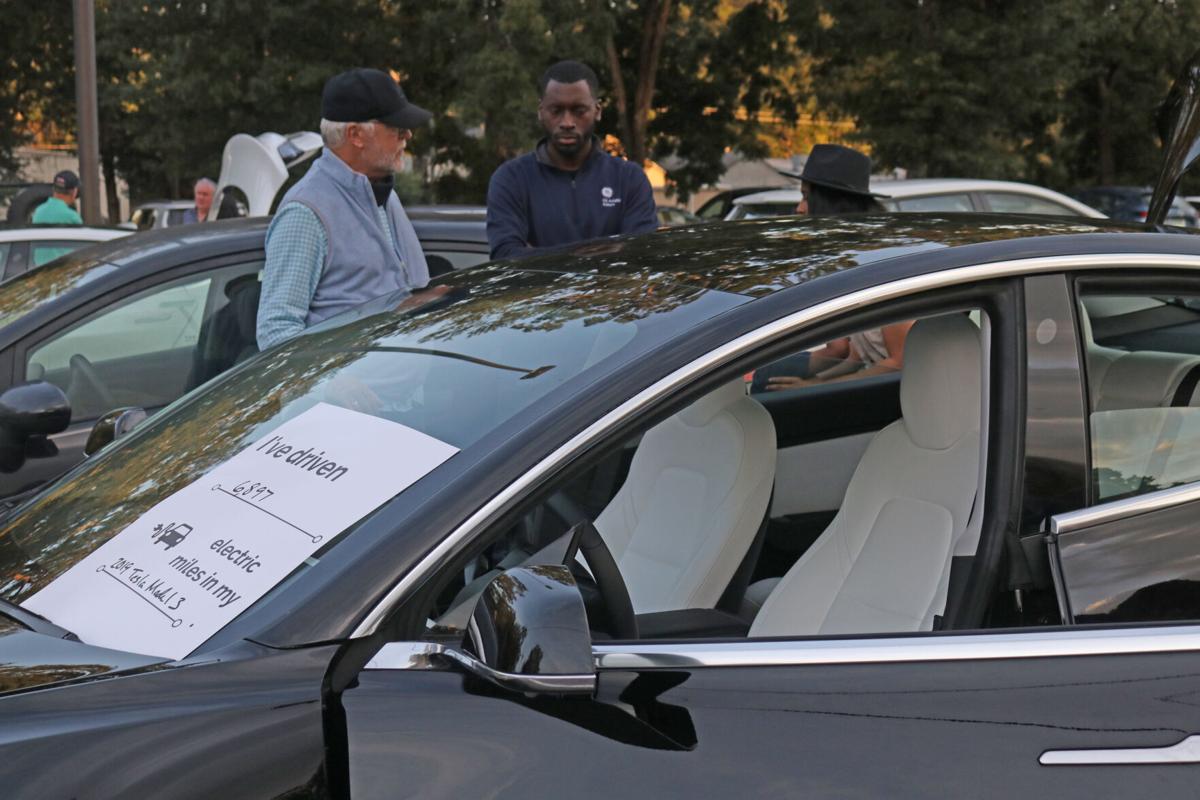 David Hill, left, talks about his 2019 Tesla Model 3 at the Auburn National Drive Electric Week EVent on Wednesday in Auburn. 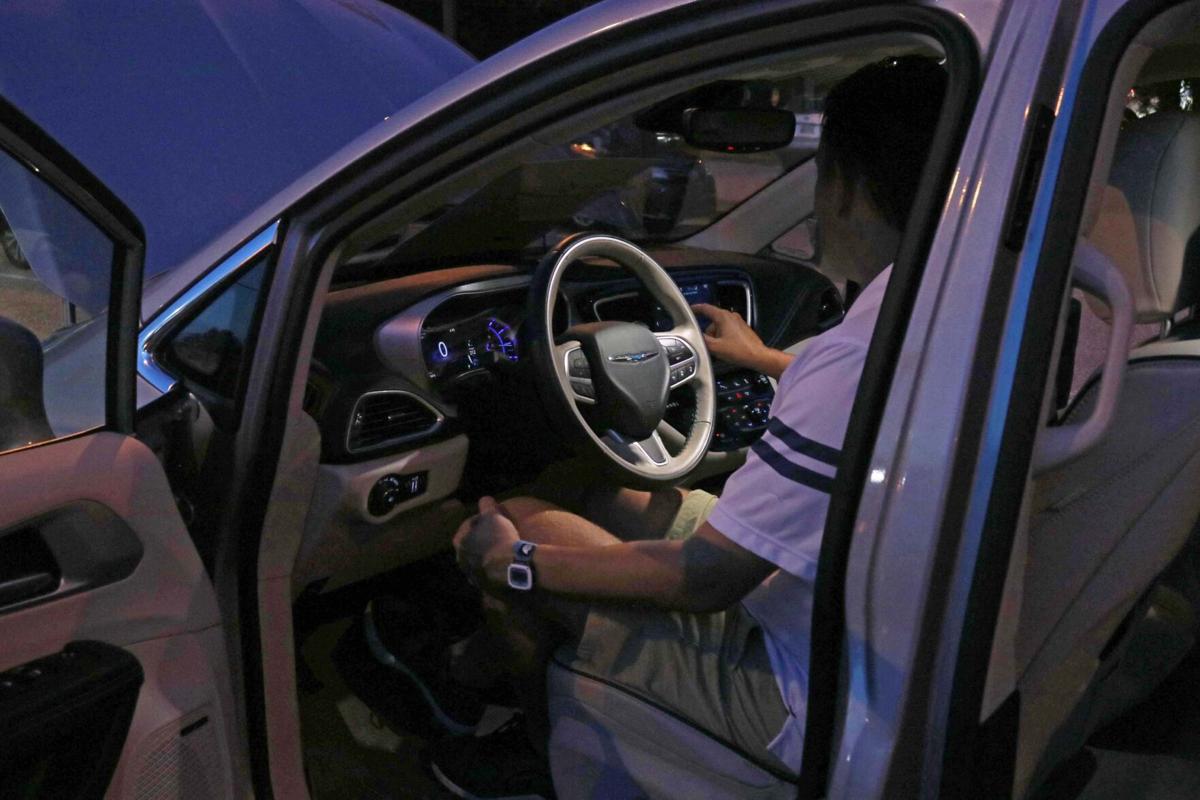 Benjamin DeBardeleben, 47, shows off the interior of his 2018 Chrysler Pacifica Hybrid from the driver's seat.

Over a dozen members of Auburn’s electric vehicle community showcased their cars and shared their experiences to the public on Wednesday evening.

Teslas and more coasted into downtown Auburn, for a meet meant for education. Drivers chatted amongst one another in and around their vehicles and demonstrated their cars’ capabilities to other attendees who didn’t own electric vehicles. The Teslas were joined by makes from other long-time vehicle manufacturers like Volkswagen and Chrysler, which are breaking into the industry.

David Hill, 73, of Auburn, was one resident appearing at the meetup with his 2019 Tesla Model 3 that he and family have driven about 6,987 miles across the South.

“Houston probably is the longest, it’s like 750 miles (driving),” he said. “We’ve got a son who lives there so we know where all the charging stations are.”

Hill said while some may be uncertain about purchasing an electric vehicle because of the need to find charging stations on the go, he’s rarely found this to be an issue as time passes in his history of owning the car.

“As long as you’re on the interstate, there’s never a problem,” he said. “We could use more stations though; for instance, I’ve got a (recreational vehicle) up at Lake Logan Martin, and there’s nothing right around the lake, so I charge at my RV.”

Hill said he’s been following Tesla since it began its foray into electric vehicles as an investor and had thoughts for many years about buying one, but it wasn’t until he purchased the Model 3 that he caught on to some of the quirks of electric vehicles that differ from traditional gasoline cars.

“The first time I drove it, it was just creepy,” Hill said. “I thought it was broken because I couldn’t hear anything.”

Benjamin DeBardeleben, 47, of Auburn, drove his 2018 Chrysler Pacifica Hybrid to the meetup. He’s owned it for about four years, during which time his family has racked up about 33,000 miles. He said while he only gets about 33 miles per electric charge compared to 450 miles per tank of gas, his family mainly only drives the car limited distances around Auburn.

“Most of our driving is electric; I’d say we drive 10,000 miles a year — 7,500 miles electric and 2,500 miles gas,” he said. “Just the savings of fuel and oil changes and whatnot, it becomes a really nice way to enjoy the fresh air and drive around and enjoy cars.”

In the early months of the pandemic, when fewer people were traveling in their vehicles, DeBardeleben said the quietness of the roadways matched with the near silence of his hybrid Chrysler SUV allowed him to have a more relaxing drive.

As an earlier electric vehicle, the 2018 Chrysler Pacifica Hybrid may be more limited on mileage when running on electric charge, but DeBardeleben said this is where the benefit of having a hybrid vehicle comes into play if drivers seek to go on longer road trips while technology improves to allow further fully electric drives.

“We’ve been to Orlando and Memphis,” he said of his furthest destinations in the SUV, “… but we just got gas along the way.”

Jim Crockett, 69, of Auburn, who’s already put 1,300 miles on his 2021 Volkswagen ID.4 he purchased in August, said he and his wife would be truly putting the car to the test driving to Cincinnati, Ohio, on Thursday to visit family. The ID.4 is Volkswagen’s first fully electric vehicle released in the United States.

“We were looking at hybrids … because we wanted to do something to get off fossil fuels,” Crockett said of his buying experience. “When this came out about a year ago, I started reading about it, and I looked at Tesla and everything else … but Volkswagen seems more open-ended (as a company) and so on.”

Crockett said improvements in electric technology in today’s vehicle options mean he’s averaged about 250-300 miles per 80% charge of his SUV, which only takes 30 minutes from a low battery.

“The battery technologies are just increasing almost daily on what they’re able to do,” Crockett said. “Plus, Volkswagen can download some firmware upgrades here and there to make this car do different things like increase the range and increase the efficiency.”

One benefit of buying the ID.4, Crockett said, is that he’s eligible for three years of free electricity at any Electrify America charging station around the country as a benefit since Volkswagen is the parent company of Electrify America. In 2019, Walmart partnered with Electrify America to install stations at many of the retail corporation’s locations, including the Auburn store on South College Street.

Other charging stations in the Auburn area include Tesla Superchargers at the Auburn Mall and Tesla Destination Chargers at the Hotel at Auburn University and Dixon Conference Center as well as the tru by Hilton hotel south of I-85.

Cedric Daniels, electric transportation manager for Alabama Power, was present at Wednesday evening’s meetup and said he was pleased at the turnout as he sees electric vehicle adoption slowly grow throughout Alabama.

“The beauty of it is as this continues to grow with opportunities in the future, additional funding that hopefully will come about state and federal, then that’s going to make people more comfortable buying,” Daniels said.

“(Customers) just call up our power company and we ask them to supply us a copy of the tag receipt, which confirms they have a plug-in electric vehicle of some type,” he said.

DeBardeleben said he’s made use of Alabama Power’s rebate with his Chrysler and appreciates the program.

“It just makes it real simple to come home, plug it into your garage wall outlet, and then the next morning you wake up and get 33 miles to go,” DeBardeleben said of the rebate.

The Alabama Clean Fuels Coalition will host its third and final National Drive Electric Week EVent in Birmingham this Saturday from 8 a.m.-noon at The Market at Pepper Place.

Here's how many astronauts NASA selects from more than 12,000 applicants

Here's how many astronauts NASA selects from more than 12,000 applicants

“He is actually the only professor I’ve known to hold office hours on the weekend. Teaching at Auburn University was his life.”

'I always wanted to be the house that people drove by': Auburn man and his kids create Christmas light show

For many Auburn locals, the house on 2078 Autumn Ridge Way is known as the Christmas House because of the Walker family’s Christmas light show…

Opelika and Auburn will be kicking off the holiday season this weekend with the return of their annual Christmas parades.

Ready to meet Santa? Here's a big list of holiday events in Auburn and Opelika this weekend and beyond

This December Auburn and Opelika are full of holiday events to enjoy including parades, art fairs, concerts, musicals and more.

Starting this week, Opelika drivers will have to take a detour around North Uniroyal Road.

"There’s some really great stories in this book — there are stories of people who were taken prisoner of war and how they survived that ordeal … there are a lot of famous football coaches, and I was especially committed to making sure we had a lot of stories told representing the Black community of Auburn."

David Hill, left, talks about his 2019 Tesla Model 3 at the Auburn National Drive Electric Week EVent on Wednesday in Auburn.

Benjamin DeBardeleben, 47, shows off the interior of his 2018 Chrysler Pacifica Hybrid from the driver's seat.