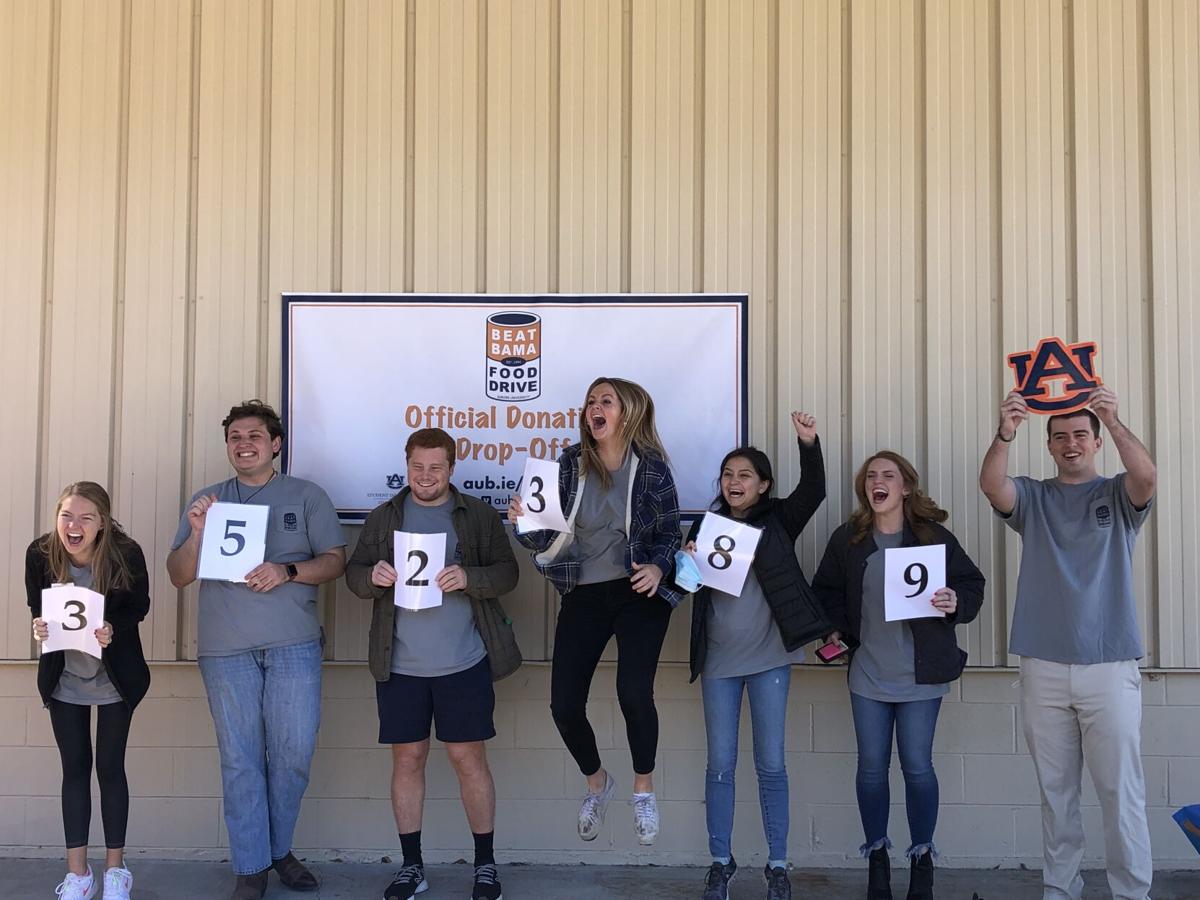 Auburn student organizers for the Food Bank of East Alabama celebrate their win over Alabama in the Beat ‘Bama Food Drive. Auburn set a record of donating 352,389 pounds of food. 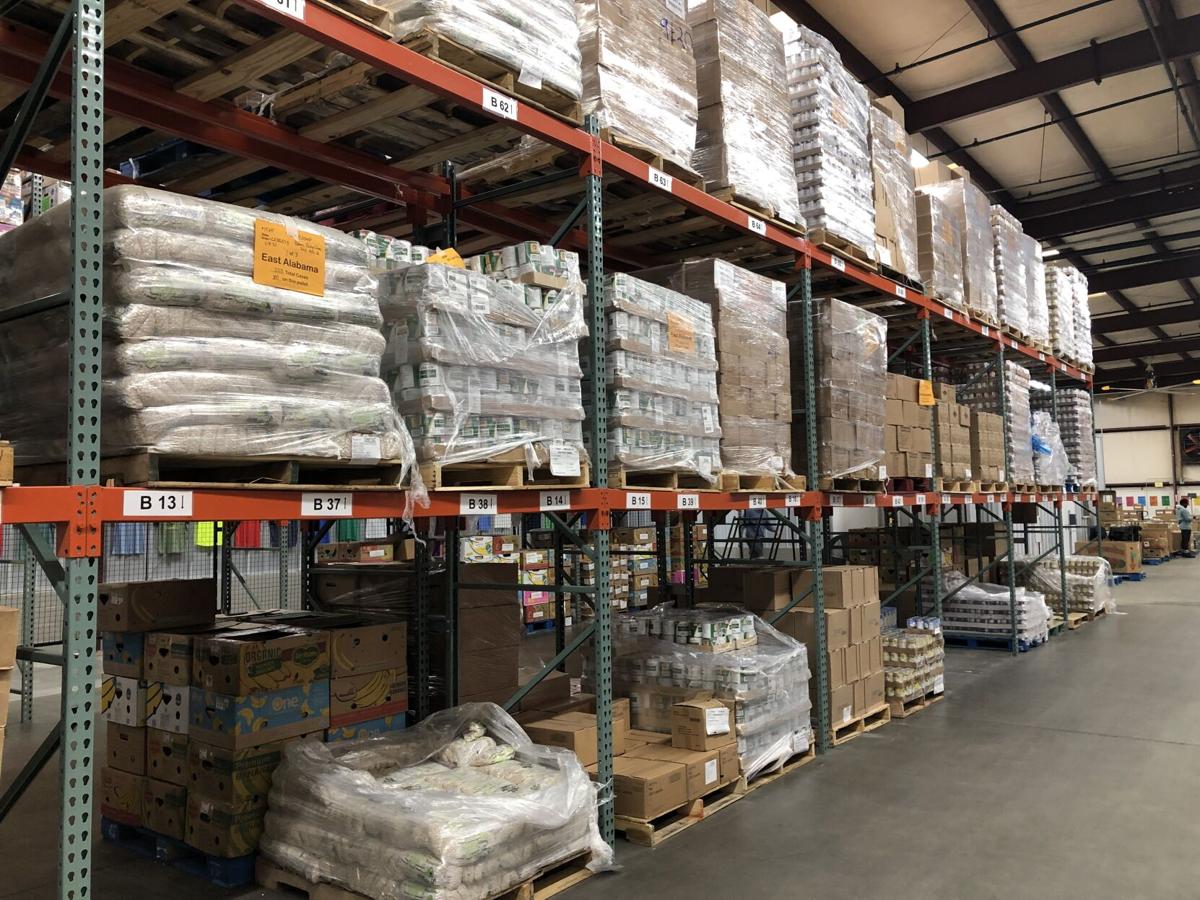 The Food Bank of East Alabama serves over 200 agencies in seven counties across Alabama and parts of Georgia.

Auburn came out on top in the 28th Beat ‘Bama Food Drive and set a new record of 352,389 pounds of donated food.

The previous record was held by Alabama with 319,437 pounds, and last year Alabama weighed in with the most donated goods.

After the announcement was made on Friday afternoon, the Auburn student organizers for the food bank celebrated by playing the song “We are the Champions.”

“I think it’s a great illustration of what you can do when you work together on something,” said Martha Henk, executive director of the Food Bank of East Alabama. “The truth is we may come out ahead this time with more pounds than them, but the real winners are the ones that are fed by this food.”

The total pounds collected by both schools over the past 24 years is the equivalent of more than 5.4 million meals or 283 tractor-trailer loads, according to Henk.

“This food drive is a great benefit to the West Alabama Food Bank and the Food Bank of East Alabama. It really is a collaborative effort,” she said.

This friendly competition was started 20 years ago by students who came up with the idea to use the Iron Bowl as a way to raise food for local food banks.

Jack Wray, a senior from Auburn University and the president of Beat ‘Bama Food Drive, has served in a leadership role with the food bank for this competition for the past four years.

“The ability to give back in such a big way is something really valuable to me,” Wray said. “We have a great core group and the Auburn community really brings it together.”

Wray said that Alabama is the second most food insecure state and that one in five people in Alabama are considered food insecure.

The food drive this year started on Oct. 1 and ended one minute before midnight on Thursday. Henk said the Food Bank of East Alabama was receiving donations right up to the last minute.

“It’s been one for the record books,” Henk said with a smile. “This is the largest donation that this bank has ever received.”

Donations are weighed on a scale, sorted, boxed, organized and then distributed to food pantries, rehab programs, soup kitchens and shelters in seven counties across Alabama and some areas in Georgia.

The Food Bank of East Alabama serves more than 200 agencies.

Henk said the timing of this food drive is very important because it will provide families with Thanksgiving meals.

“We have come through an extraordinarily difficult time,” Henk said. “We’re still dealing with the effects of the pandemic from supply chain issues to transportations issues.

“The thing that I’ve been amazed at, though, is when people really come together to work on something, we can move mountains. That’s exactly what has happened.”

“I just want to say thank you to everyone who donated,” Wray added. “It’s literally been an incredible year. I’m so happy that it’s gone as well as it has.”

'I always wanted to be the house that people drove by': Auburn man and his kids create Christmas light show

For many Auburn locals, the house on 2078 Autumn Ridge Way is known as the Christmas House because of the Walker family’s Christmas light show…

“He is actually the only professor I’ve known to hold office hours on the weekend. Teaching at Auburn University was his life.”

Opelika and Auburn will be kicking off the holiday season this weekend with the return of their annual Christmas parades.

Hey kids! Get in a snowball fight with Opelika Police officers at Snopelika this year!

There’s a new event at this year’s Snopelika.

Starting this week, Opelika drivers will have to take a detour around North Uniroyal Road.

Ready to meet Santa? Here's a big list of holiday events in Auburn and Opelika this weekend and beyond

This December Auburn and Opelika are full of holiday events to enjoy including parades, art fairs, concerts, musicals and more.

Auburn student organizers for the Food Bank of East Alabama celebrate their win over Alabama in the Beat ‘Bama Food Drive. Auburn set a record of donating 352,389 pounds of food.

The Food Bank of East Alabama serves over 200 agencies in seven counties across Alabama and parts of Georgia.