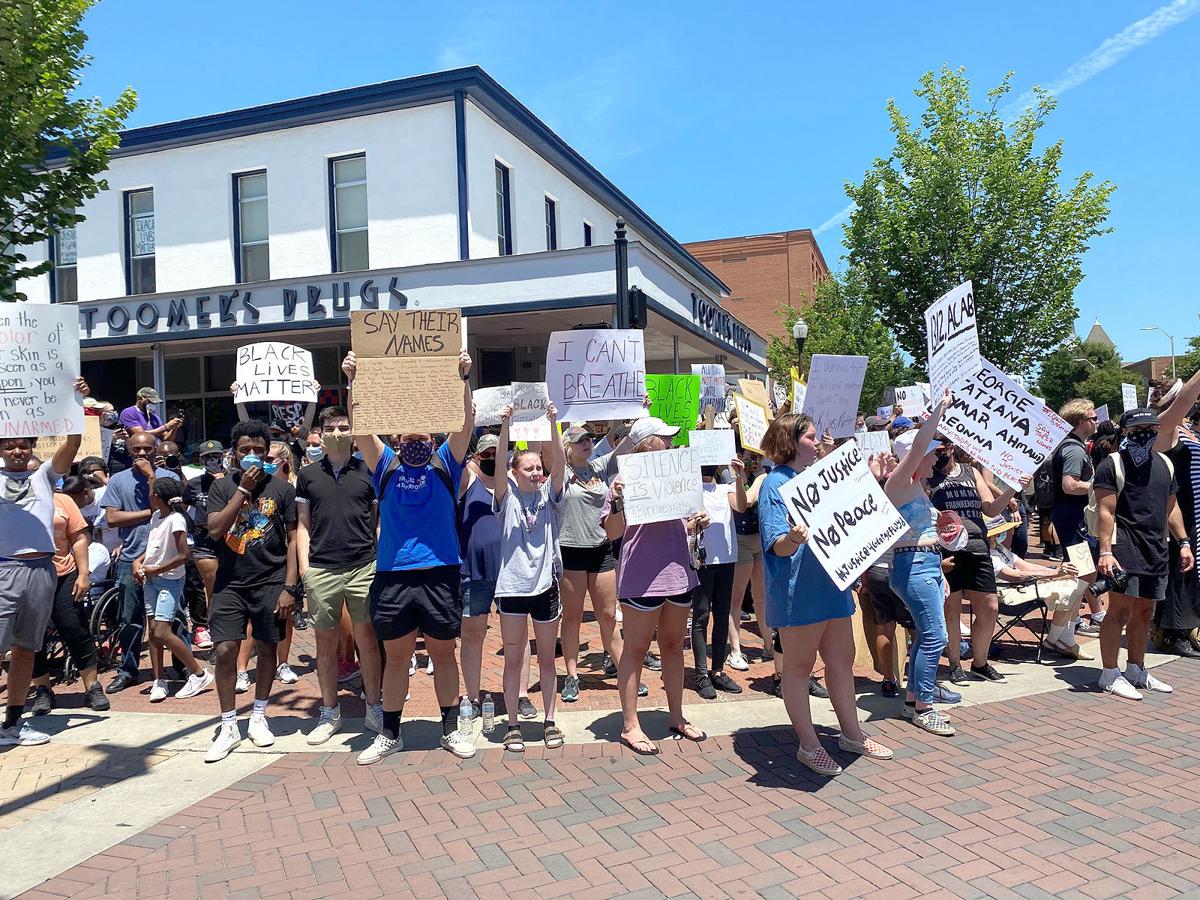 All four corners at College St. and Magnolia Ave. in downtown Auburn were full of people Sunday showing support for protests regarding police brutality going on around the nation. 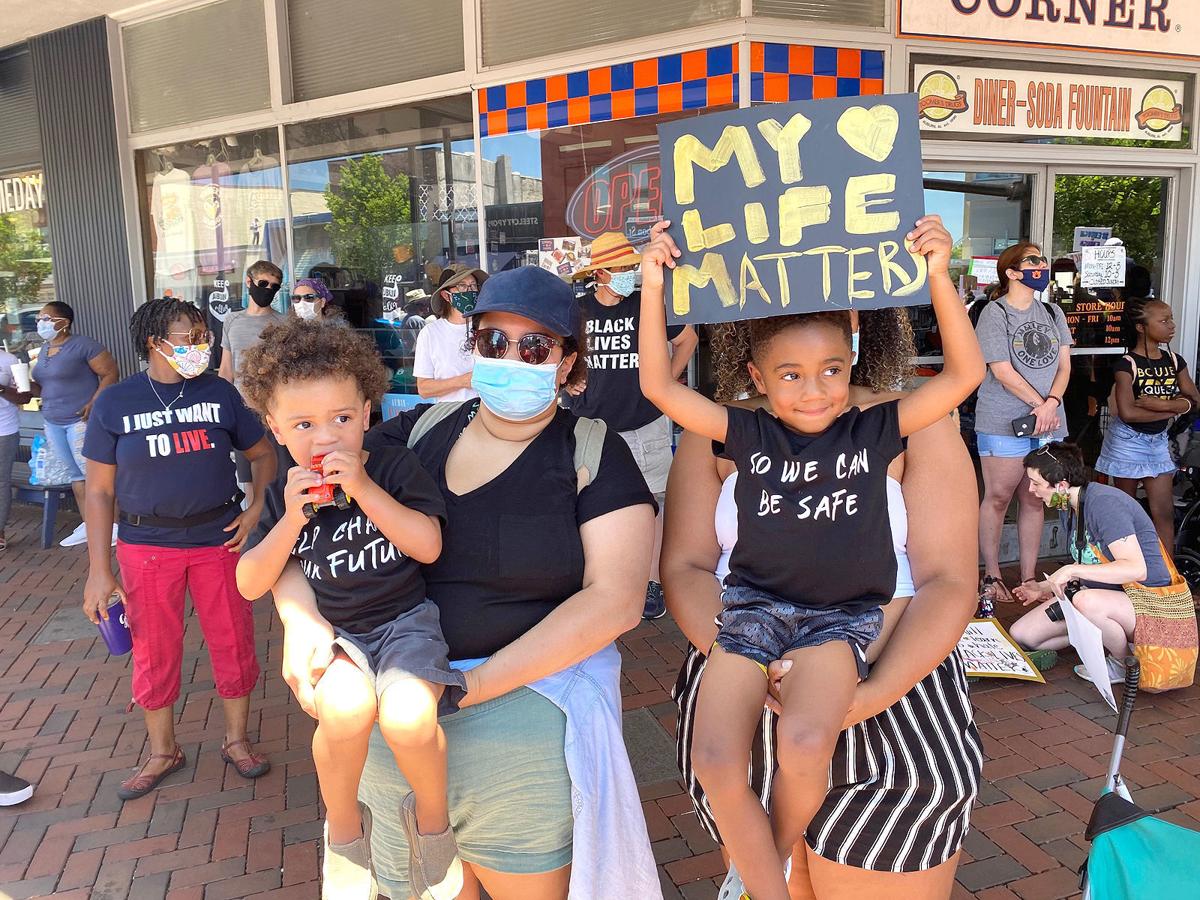 The Banks brothers – Kylan and Maeson – were out to show their support during Sunday's protest in downtown Auburn. 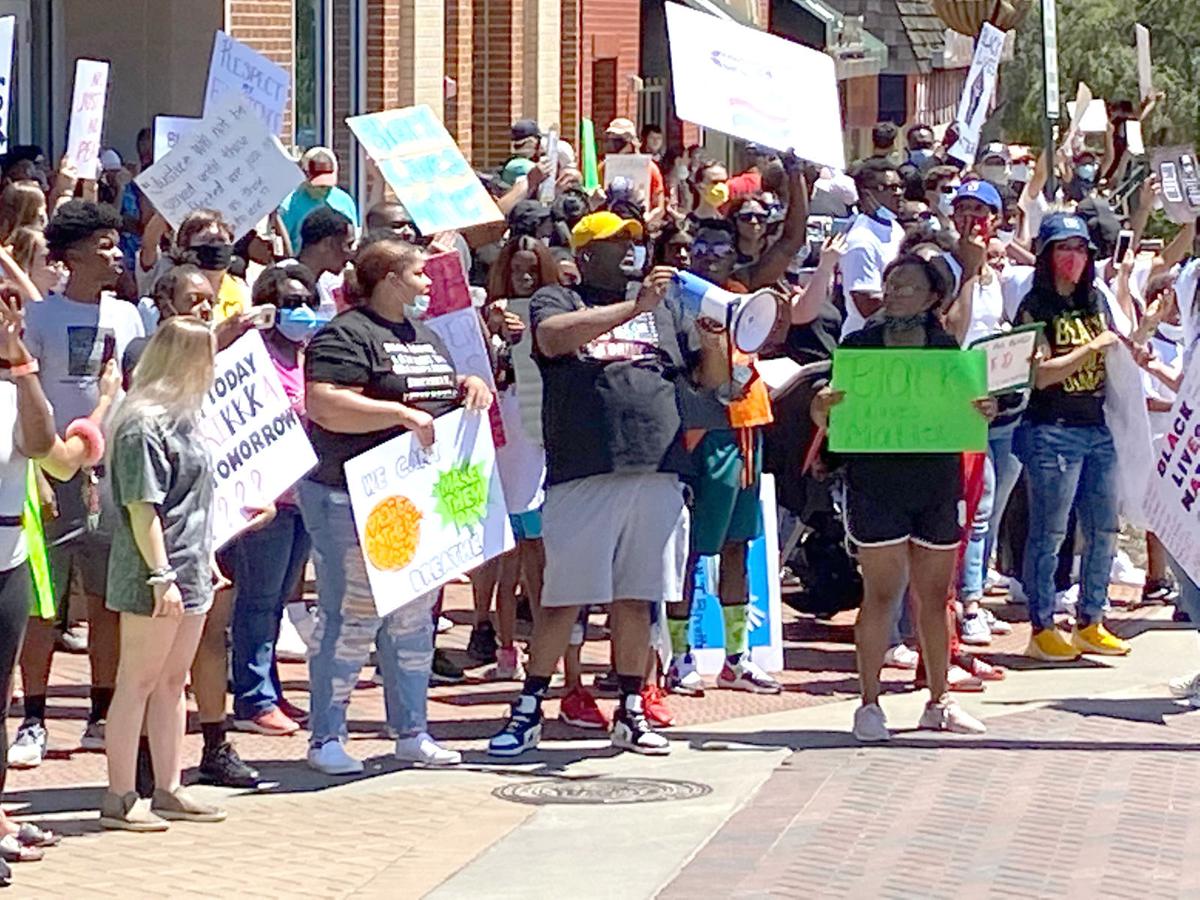 Jecorey Purifoy, who led Saturday's march around Courthouse Square, was back on the bullhorn Sunday. He helped lead the Black Lives Matter chants around Toomer's Corner.

It was Auburn’s turn Sunday to gather at Toomer's Corner and show solidarity with protesters across the country.

Over 500 people gathered on the corners of College St. and Magnolia Ave., chanting, waving signs and cheering for the dozens of cars honking their way through the intersection, all in response to recent civil unrest and the deaths of black Americans at the hands of police.

“We’ve been seeing problems like this for years, literally my entire life,” said Haylee Singleton. “It wasn’t brave to come down here and do what we could do help.”

“I came down here like a day before those protests started, and I really wanted it to happen down here just to feel solidarity and not feel so alone,” said the new wildlife science graduate. “I came down to make sure everyone was taken care of and hydrated.”

The event came together as most participants expected.

“I think it was something that needed to be done, to stand up as a whole community, not just one color or one race, everybody stand up,” said Auburn resident Stephanie Jenkins. “This is exactly what I expected: no violence and no looting, just a peaceful march.”

Save for about five minutes when everyone moved into the middle of the intersection, traffic flowed easily through downtown Auburn, and there were no public safety incidents whatsoever.

Restrictions of social distancing were not much in evidence, however.

Auburn Mayor Ron Anders came through downtown in the early afternoon to see how everything was going. He was not at all surprised at the peaceful tone to the gathering.

“I knew that Auburn is the kind of community that does not tolerate racism and abuse, and they are very passion about that,” Anders said. “At the same time, they are very supportive and concerned about their community as a whole.

“What I witnessed this afternoon is a lot people who have come together because they are concern about what has happened in our country, and they want to express that concern and frustration. At the same time, they were very respectful to our downtown, to our businesses. They were throwing their trash away, and I hope that continues.”

Anders noted that the event, organized by local Unitarian minister Chris Rothbauer, came together “organically” and at the last minute – making the normal permitting process irrelevant.

Nonetheless, city police and other divisions were ready for the gathering whether they were needed or not. There was no discernible police presence among the crowds on the corners.

“It also makes me very grateful that we have such a great law enforcement culture in Auburn and in Lee County that the trouble we have seen in our country we have not been exposed to here locally,” Anders concluded.

Smiths Station will host a Peace Walk Thursday to stand against racism and division.

Auburn and Opelika hosted peaceful protests over the weekend, but residents are not done speaking up yet.

Some Auburn residents and students will march Sunday afternoon, while pastors and volunteers pray for peace and unity a few miles to the south.

Auburn University students have taken their desire for change to social media.

Local city and county officials, along with a crowd of residents, gathered in downtown Opelika’s courthouse square for a wreath laying memoria…

Watch Now: Unrest over police killings spreads across US

The protests, which began in Minneapolis following George Floyd's death Monday after a police officer pressed a knee on his neck for more than…

Photos: Protests over police killings rage in US cities

Tense protests over the death of George Floyd and other police killings of black men grew Saturday from New York to Tulsa to Los Angeles, with…

Photos: What protests against police looked like yesterday in cities across US

The country convulsed through another night of unrest over the death of George Floyd and other police killings of black people, with police ca…

All four corners at College St. and Magnolia Ave. in downtown Auburn were full of people Sunday showing support for protests regarding police brutality going on around the nation.

The Banks brothers – Kylan and Maeson – were out to show their support during Sunday's protest in downtown Auburn.

Jecorey Purifoy, who led Saturday's march around Courthouse Square, was back on the bullhorn Sunday. He helped lead the Black Lives Matter chants around Toomer's Corner.