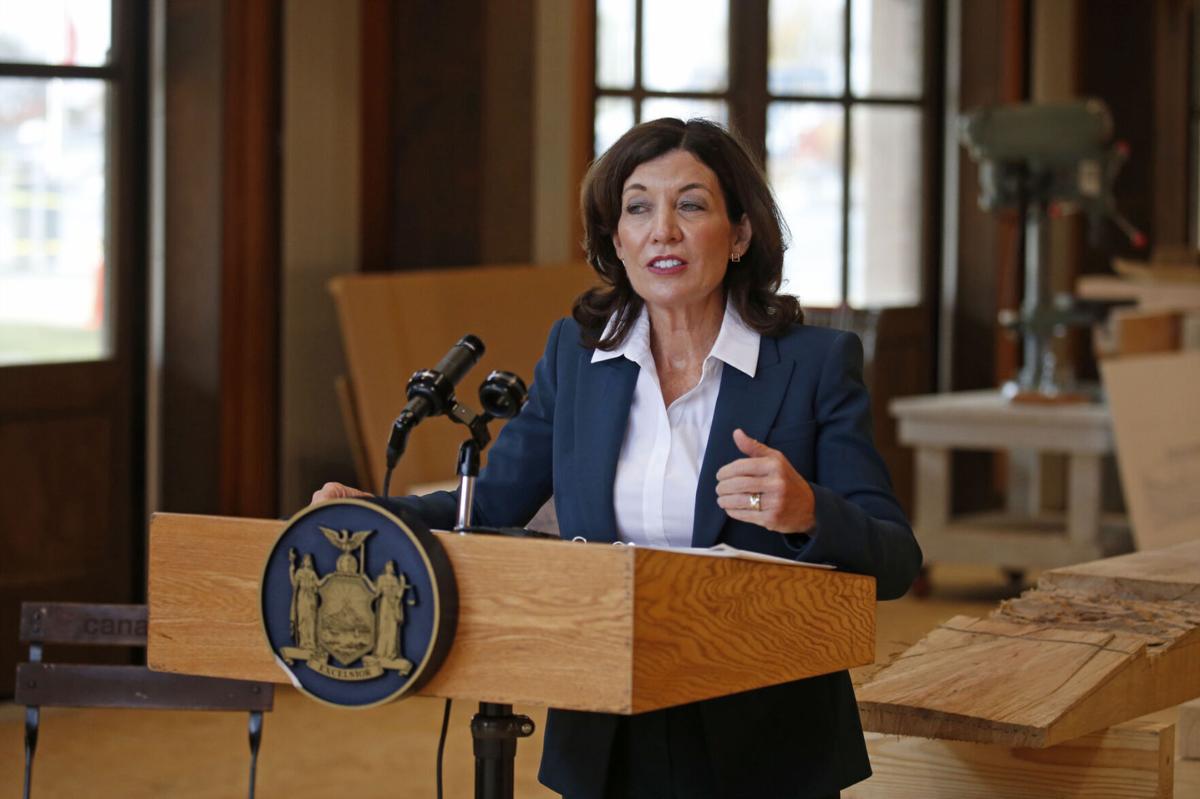 Lt. Gov. Kathy Hochul speaks at the ribbon-cutting for the Longshed at Canalside on the Central Wharf on Thursday, Oct. 15, 2020. 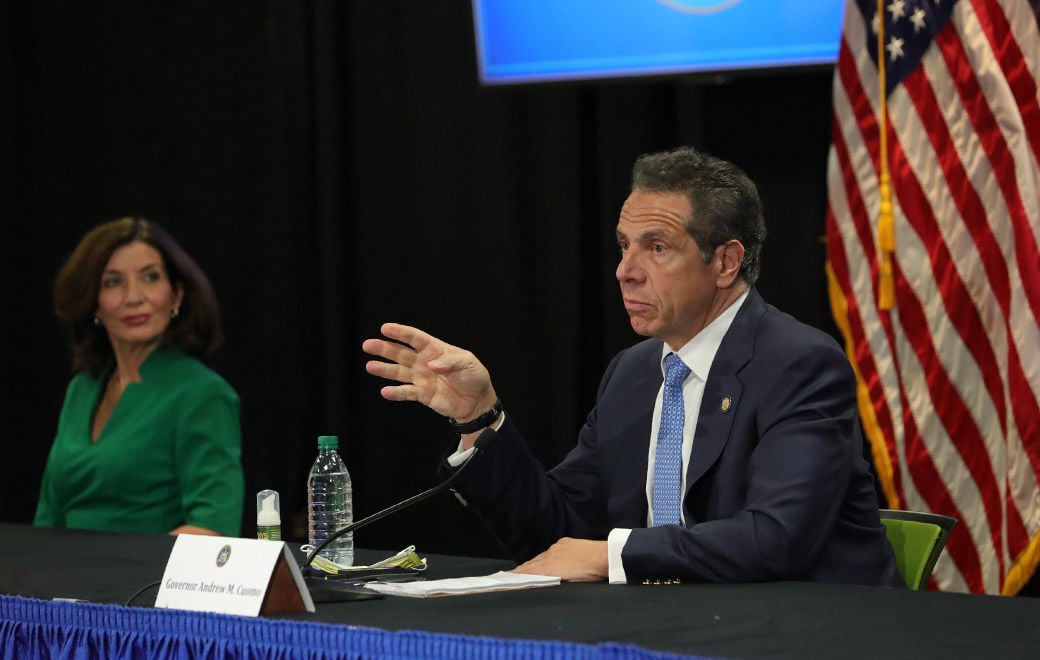 Gov. Andrew Cuomo and Lt. Gov. Kathy Hochul give a Covid-19 briefing at Roswell Park Comprehensive Cancer Center in Buffalo on Monday, May 18, 2020.

Lt. Gov. Kathy Hochul of Buffalo has had very little to say about the sexual harassment allegations against Gov. Andrew M. Cuomo – which could, in a worst-case scenario for Cuomo, make the former congresswoman from Buffalo the state's first female governor.

But Hochul has had plenty to say about sexual harassment and assault over the years, with most of it revolving around the theme: "Enough is enough."

That's the name of landmark 2015 legislation that the Cuomo administration pushed to try to end sexual assaults on college campuses. Hochul has been the law's chief evangelist for years, traveling to college campuses across the state to spread the word that New York has the nation's strongest law on the issue.

But the phrase "enough is enough" also seems to sum up Hochul's thoughts about sexual harassment and assault in general.

"There is still a culture that is pervasive and that is why women in a workplace – whether they're in technology in Silicon Valley or in Hollywood or in the corridors of our legislatures and Congress – they're still being subjected to unwanted advances, sexual harassment and sometimes assault," Hochul said in an interview with WBFO in November 2017. "And this is the year – this should be part of our legacy going forward for the next 100 years, that this is the day it's over. Hashtag, it's over. We're not putting up with this anymore."

Three years and four months later, Cuomo stands accused of making unwanted advances to three different women. In separate New York Times stories, one former state worker said Cuomo kissed her and asked her about playing strip poker. The second former state worker said Cuomo asked her if she "had ever been with an older man." And the third woman accused Cuomo of inappropriately touching her and asking for a kiss at a wedding.

And so far, Hochul has had just one thing to say about all this.

"Everyone deserves to have their voice heard and taken seriously. I support an independent review," Hochul said Saturday as the second of the three allegations against Cuomo surfaced.

Hochul's spokesman, Bryan Lesswing, said Tuesday the lieutenant governor has no further comment on the allegations against the governor at this time.

There are understandable reasons for Hochul to keep quiet now. Anything she said further criticizing Cuomo could be read as an attempt to advance her own career – and such outwardly self-serving moves have never been part of Hochul's genial political persona.

What's more, Hochul's comments are in keeping with those of most other Democratic elected officials, said Erie County Democratic Chairman Jeremy Zellner.

"Kathy's been deliberate, and I think our state party chair has been deliberate about his statements, as have I and our county executive here locally," Zellner said. He noted that most Democrats agree "that there needs to be an independent investigation that the attorney general we all know can more than handle and move along."

Given Hochul's long-standing advocacy of women's issues, as well as her efforts to help elect other women candidates to office, Hochul's careful stance on the Cuomo controversy has so far not produced any backlash.

"What we really love about her is that she's a team player" who's always willing to help other women candidates, said Barbara Schifeling, president of the Women's TAP Fund, a Buffalo-based political action committee that aims to elect more pro-choice women to public office.

"She has gone above and beyond to mentor and encourage women to run for public office," Ossorio said, adding: "She's been working under the radar, year after year, championing many of the advancements for women that New York has has taken up."

That's especially true regarding her support for that "Enough Is Enough" legislation, which forces colleges and universities in the state to adopt tough, comprehensive policies to combat sexual assault, including a uniform definition of what it is.

A review of press clippings from across the state show that Hochul, who has been lieutenant governor since 2015, has visited dozens of college campuses to discuss the law and what it means to college students.

And along the way, she has had plenty to say about sexual harassment and assault that seems especially relevant now that her boss stands accused of sexually harassing three women far younger than him.

“We are addressing this issue head on in the state of New York," Hochul said during an August 2016 visit to the State University of New York at Geneseo, according to a report in the Genesee Country Express. "We have a governor who has three college age daughters. He is very aware of the challenges we face and it troubled him deeply. Governor Cuomo came up with a plan to protect young people on campuses. We needed to create a better environment, so they could feel like they could come forward with their story."

"You have a right to be free from unwanted touching of someone else," she said. "That is how it is in our country, and that is the respect we should show each other."

And in April 2018, in an interview with the Queens Tribune, Hochul said: "The very public exposure of high-profile men – and the fact that there are finally consequences for behavior that has long been unacceptable, but has long been kept in the shadows – that has empowered women to come forward."

Watch Now: What will it take to keep schools open?

"Should Cuomo be forced out, Langworthy's attacks – if successful – could make Hochul a politically-weak successor while already giving the GOP material for a fund-raising pitch," writes Robert J. McCarthy.

Analysis: Cuomo sex harassment scandal is pushing out other issues at precarious moment

The distractions of scandals are being used by a growing number of lawmakers to make a demand: Cuomo must resign.

Amid a tsunami of new calls for the the governor's resignation, government insiders are speculating that transition "discussions" are already underway.

From The News' archives: Who is Kathy Hochul?

Buffalo native Kathy Hochul will become the next governor of New York State.

Democratic leaders, under pressure from Republicans in the political minority as well as a growing number of Democratic members of the Assembly and Senate, pushed up a change to diminish the governor’s existing authority.

Opposition mounts against Cuomo in face of harassment allegations

Lt. Gov. Kathy Hochul speaks at the ribbon-cutting for the Longshed at Canalside on the Central Wharf on Thursday, Oct. 15, 2020.

Gov. Andrew Cuomo and Lt. Gov. Kathy Hochul give a Covid-19 briefing at Roswell Park Comprehensive Cancer Center in Buffalo on Monday, May 18, 2020.