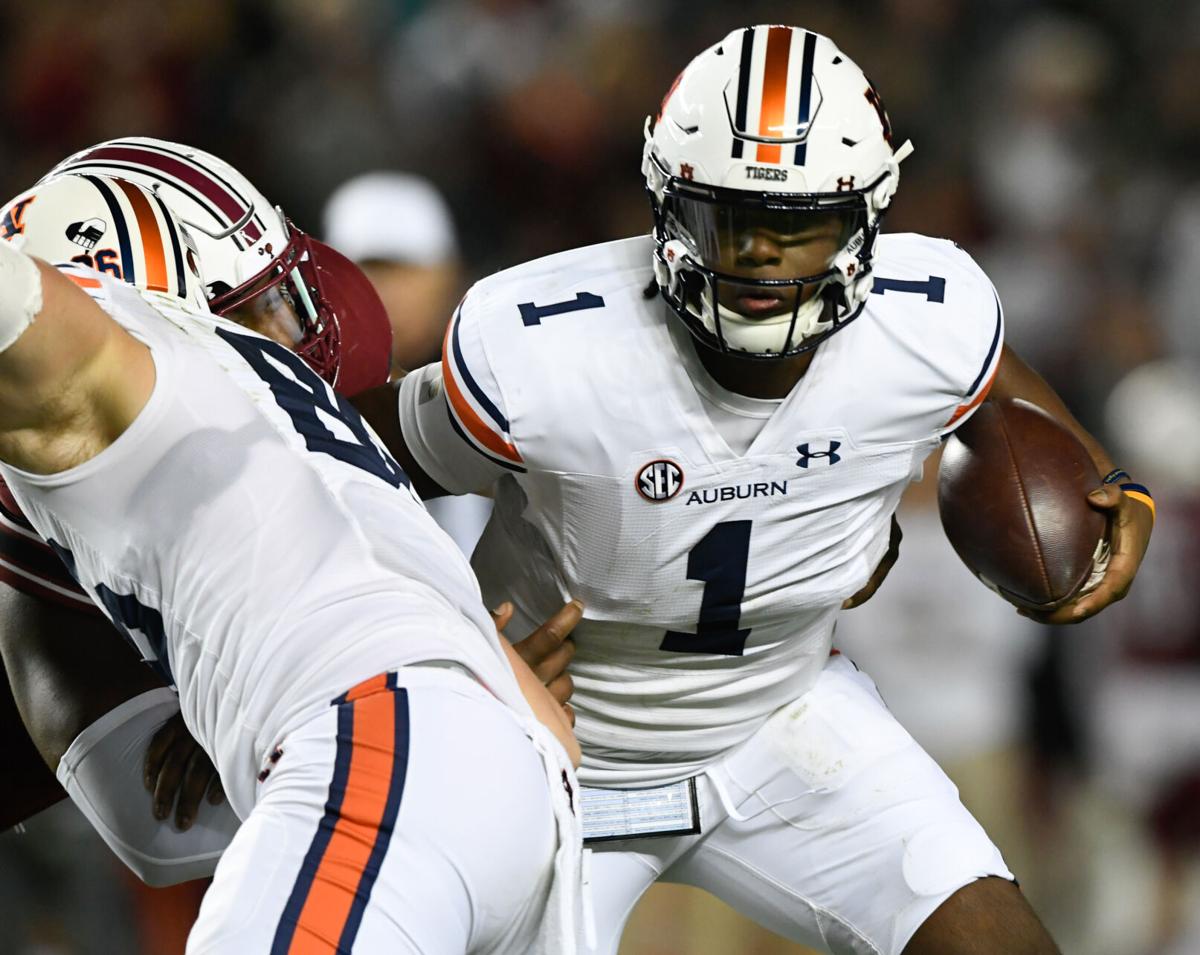 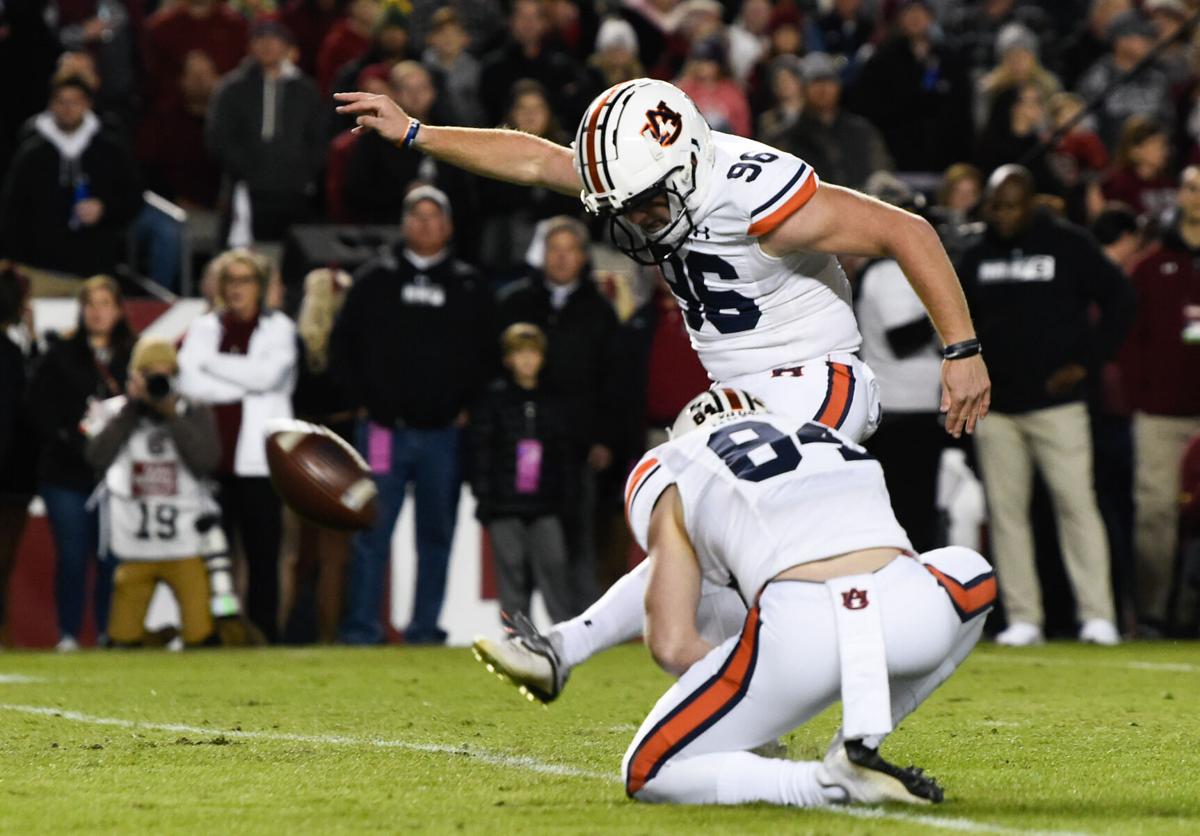 The Tigers dropped their third straight game this season in the form of a 21-17 road defeat by South Carolina. The loss leaves Auburn with its longest losing streak since 2012, when the Tigers dropped five in a row in Gene Chizik’s final season as head coach.

“There’s answers for what happened to us tonight,” Auburn head coach Bryan Harsin said. “Whether we did them or not or we put our guys in that position to do it, that’s what we have to go back and assess.”

After an up-and-down start to 2021, Auburn running back Tank Bigsby returned to form Saturday night.

Bigsby showed out on the ground against South Carolina and ended the game with 22 carries for 164 yards and one touchdown. Bigsby’s score was a 7-yard score in the first quarter to give the Tigers an early 14-0 lead.

“Tank always plays hard. I believe in him,” wide receiver Shedrick Jackson said. “He’s always going to give his all and run hard. He’s a good player and makes big plays.”

Bigsby’s performance was notable in that it was only the second time the sophomore cleared 100 rushing yards in SEC play, the other instance occurring against Ole Miss on Oct. 30

Kaufman’s interception of South Carolina Jason Brown in the first quarter stood as the first of Kaufman’s collegiate career. Kaufman made the most of the pick, too, as he caught the ball just outside the South Carolina end zone and ran 38 yards downfield to the Auburn 39-yard line.

The Tigers made the most of Kaufman’s pick. Quarterback TJ Finley led a seven-play drive that Tank Bigsby capped off with a 7-yard rushing touchdown to put the Tigers ahead 14-0 late in the first quarter.

Kaufman has played an important role as a defensive back in his first season at Auburn. Entering Saturday’s action, Kaufman had 26 tackles, two tackles for loss, two forced fumbles and one sack.

Auburn offensive tackle Kilian Zierer got another chance to prove himself Saturday.

Zierer was the Tigers’ starting left tackle against the Gamecocks. It stood as Zierer’s second career start at Auburn, with his other coming earlier this season against Arkansas.

While the matchup with the Gamecocks was only Zierer’s second start, the junior has appeared in seven of the Tigers’ 11 games this season.

Auburn had to go without three more starters in Saturday night’s game against South Carolina.

Linebacker Owen Pappoe, wide receiver Kobe Hudson and offensive guard Brandon Council were unavailable against the Gamecocks. Pappoe was present but not dressed out during pre-game warm-ups, while neither Hudson nor Council were in attendance.

The trio’s absences were in addition to the Tigers having already lost quarterback Bo Nix and kicker Anders Carlson for the remainder of the season.

Pappoe missed four games before returning for the Ole Miss game three weeks ago. He then missed last week’s game against Mississippi State.

In his two games back from injury, Pappoe had eight tackles and one tackle for loss. He’s recorded 23 tackles, three tackles for loss and two quarterback hurries in five games this fall.

“As far as being hurt, this is the first time I’ve ever had to go through something like this, so this was foreign to me,” Pappoe said on Nov. 3. “I’m still not even really fully 100 percent yet; it’s still bothering me a little bit now, but it’s not going to get better until after the season, you know what I’m saying, so I’m still pushing through it.”

Hudson was Auburn’s leading receiver against Mississippi State with eight receptions for 107 yards and one touchdown before taking a big hit early in the fourth quarter that initially drew a targeting penalty before review overturned the call. Hudson returned to the field before the end of the Tigers’ 43-34 loss.

Through 10 games, Hudson leads Auburn in receptions (37) and receiving yards (490). Hudson has filled a much-needed role among the Tigers’ receivers after a freshman season in 2020 during which he had seven receptions for 70 yards and no touchdowns.

Auburn head coach Bryan Harsin was asked about Hudson’s injury Wednesday and said it was not season-ending.

Council, meanwhile, started at left guard in Auburn’s first eight games before missing the Tigers’ game against Texas A&M on Nov. 6. The senior did not play against Mississippi State the following week.

Suddenly, Jordyn Wieber is not the only Olympic champion in the gym anymore.

Suni Lee swung her way to her first bars win in college, Derrian Gobourne turned Bud Walton Arena into her dance stage on floor, and the Auburn gymnastics team came away with a big SEC road win Friday at Arkansas.

LEE: Voters, here’s your top team: Auburn deserves to be ranked No. 1

Auburn could be ranked No. 1 in the country on Monday — and these Tigers deserve the nod.

Kristi Malzahn hospitalized in Florida with an infection

“We appreciate and thank all those who have offered prayers and support and ask that you continue to pray for her recovery.”

Auburn men’s basketball moves up to No. 2 in AP poll

Auburn came in at No. 2 in this week’s Associated Press poll, up two spots from last week’s rankings. The Tigers sit second behind Gonzaga, which received 25 first-place votes.

Auburn’s Bruce Pearl makes the case for why the Tigers should be ranked No. 1

Bruce Pearl made his case Monday for why Auburn should have been ranked No. 1 in the AP poll. The Tigers were ultimately ranked second, just four points-behind first-place Gonzaga.

Drew Watson laughed. It felt different this time, she said.

At only 32 years old, Austin Davis qualifies as a star in the making in the coaching profession. For those who have known him going back to Southern Miss, none are surprised.

No. 4 Auburn is hoping for a reversal in fortunes Saturday night, as Ole Miss has won the last two meetings and four of the last six games between the two teams.