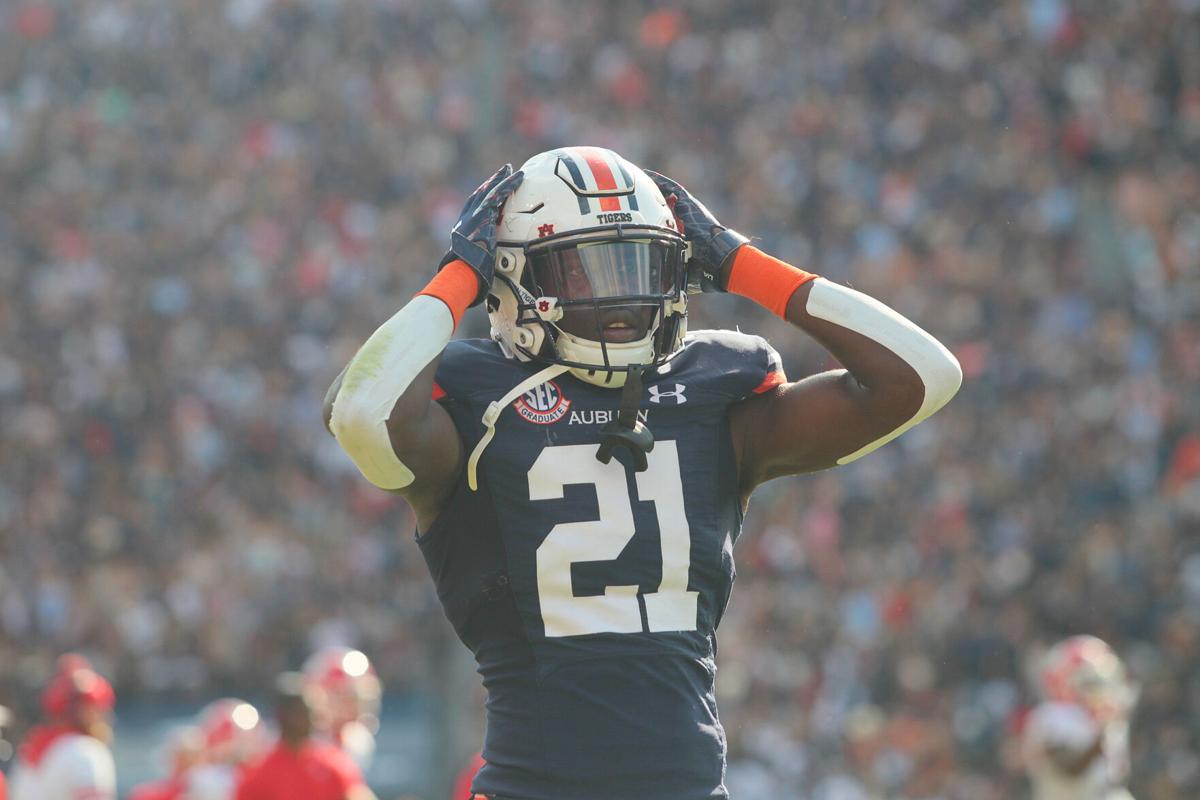 Auburn safety Smoke Monday (21) reacts after getting called for a targeting penalty during the Tigers’ game on Saturday at Jordan-Hare Stadium. 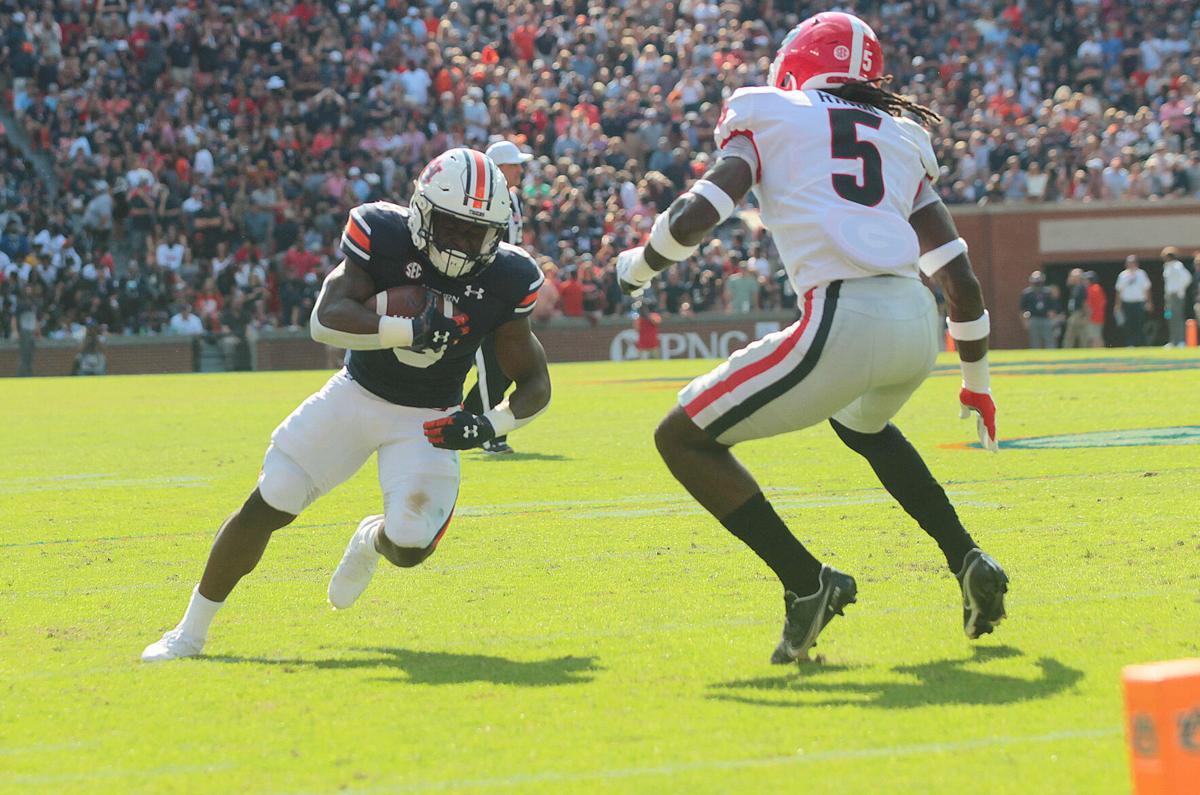 Auburn running back Shaun Shivers (8) during the Georgia and Auburn game Saturday at Jordan-Hare Stadium.

The Auburn ground game found little room to work with against one of the nation’s top defenses Saturday.

The Tigers only managed 46 rushing yards against the Bulldogs in Saturday’s loss. The inability to run the ball forced Auburn to air it out, as junior quarterback Bo Nix had 21 completions on 38 attempts for 217 yards.

Auburn’s 1.6 rushing yards per carry was its lowest since averaging just 0.6 yards against Clemson in September 2017.

Tank Bigsby led Auburn with 10 carries for 28 yards and one touchdown. The sophomore’s six-yard rushing score in the third quarter was the Tigers’ only touchdown of the afternoon.

Auburn’s loss to Georgia on Saturday stands as another unwelcomed outcome for the Tigers in The Deep South’s Oldest rivalry.

The Bulldogs’ victory Saturday stood as the Tigers’ fifth straight loss in the series, the team’s longest losing streak in the rivalry since 1944-48. Auburn’s last win in the series came in November 2017, when Auburn topped then-No. 1 Georgia 40-17.

Auburn’s recent luck against Georgia in Jordan-Hare Stadium did not continue Saturday. Four of the Tigers’ last five victories against the Bulldogs all came in Auburn, and the two teams had alternated victories in Jordan-Hare in every meeting since 2008 prior to this year.

Monday ejected in first half

The Tigers’ defensive effort suffered a considerable blow in the first half of Saturday’s action.

Auburn senior safety Smoke Monday was ejected with 14:50 remaining in the second quarter due to a targeting penalty on Georgia quarterback Stetson Bennett. Monday seemed to realize right away what was coming after the hit, as he put his hands on his helmet and waited until the officiating crew rendered the call.

“Smoke is a great guy, great leader. Obviously, it hurt us when he left, but we have a next-guy-up mentality,” Auburn defensive back Bydarrius Knighten said.

Monday’s absence left the Tigers to rely on Zion Puckett and Donovan Kaufman, who combined for 15 tackles in the loss.

Monday left the game with three tackles and one quarterback hurry. Because the foul occurred in the first half, he’ll be able to start in the Tigers’ game against Arkansas on Saturday.

LaGrange native Kobe Hudson delivered his fair share of plays against his homestate squad on Saturday.

Hudson came through as the Tigers’ leading receiver and ended the afternoon with a game-high five receptions for 50 yards. Hudson’s role was an important one for Auburn, which turned to its aerial attack and ended the game with 217 passing yards.

Hudson’s play stood as the second time this season he’s had five receptions, the other instance coming against Georgia State on Sept. 25.

The Auburn Tigers played without two defensive starters for the second straight week.

Junior linebacker Owen Pappoe and senior EDGE TD Moultry were not available for the Tigers’ game against No. 2 Georgia. Pappoe has not played since sustaining an apparent leg injury against Penn State on Sept. 18, while Moultry missed the LSU game last Saturday.

Pappoe entered 2021 after a sophomore season in which he posted the second-most tackles for the Tigers in 2020. He recorded 15 tackles to start the season before leaving the Tigers’ third game against Penn State in the second half with an apparent leg injury.

Pappoe did not play in Auburn’s games against Georgia State on Sept. 25 or against LSU last Saturday.

Moultry has been one of the team’s most productive pass rushers this fall. Through four games, Moultry has a team-high three sacks along with 23 tackles, six tackles for loss and two quarterback hurries.

Defensive tackle Zykeivous Walker and wide receiver Elijah Canion, who each missed the LSU game, were back for the Tigers. Walker had one tackle, while Canion did not record any statistics in the game.

Auburn safety Smoke Monday (21) reacts after getting called for a targeting penalty during the Tigers’ game on Saturday at Jordan-Hare Stadium.

Auburn running back Shaun Shivers (8) during the Georgia and Auburn game Saturday at Jordan-Hare Stadium.