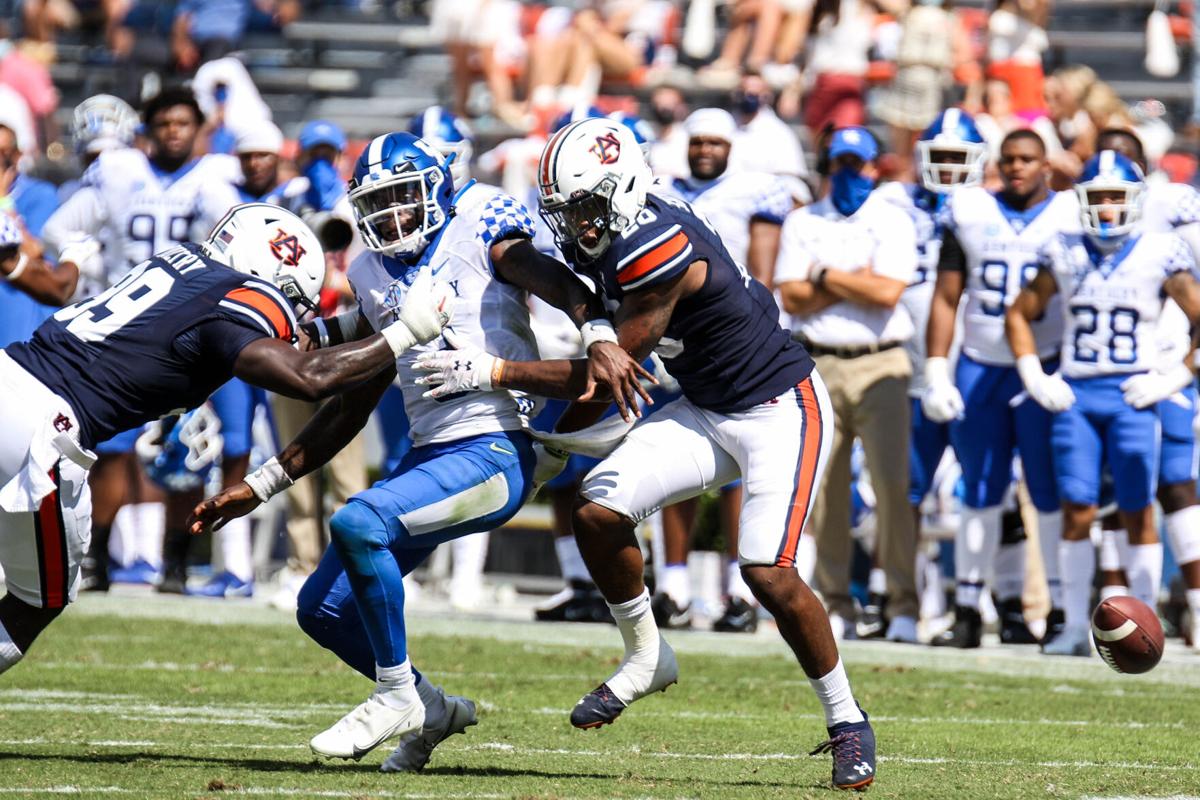 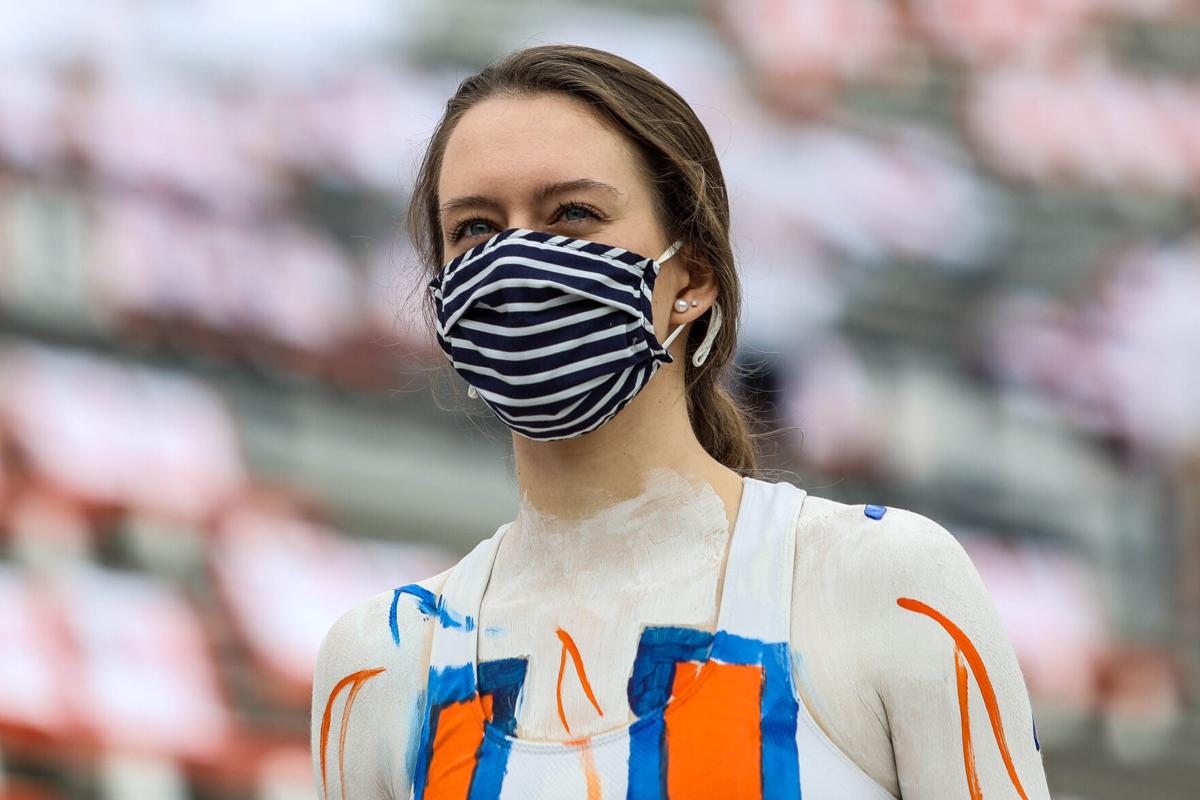 An Auburn fan wears a mask in the stands before the Auburn and Kentucky game on Saturday.

The Auburn defense couldn’t seem to get Kentucky off the field during the first half of action on Saturday. Despite the lackluster results early, the Tigers responded to make sure the Wildcats headed back to Lexington with a loss.

The Tigers’ defenders buckled down tremendously in the fourth quarter of Saturday’s game, forcing two three-and-outs and two fumbles to seal a 29-13 victory. The performance with the game on the line was a nice change of pace for Auburn, which watched Kentucky rack up eight third-down conversions on 10 attempts and 234 yards of offense in the first half.

“I mean, at the end of the day, we’re just depending on guys to do their jobs, play their gap, play their man,” Auburn safety Smoke Monday said. “I feel like we came back down in the second half and played with that kind of fire that Auburn normally plays with. Basically we just kept pushing on the third-down plays. That’s pretty much it.”

Kentucky’s strategy in the first half seemed evident: grind out long possessions and put up points to cap them off. The Wildcats accomplished the first part of the mission repeatedly in the opening two quarters, as all four of the team’s first-half possessions lasted for at least nine plays.

But the Wildcats were unable to capitalize more than once — that play coming on its opening drive of the afternoon — and their last failed attempt likely set the stage for Auburn’s strong second half.

Kentucky was inches away from taking the lead just before halftime when Auburn cornerback Roger McCreary intercepted a pass in the end zone. Although the ensuing return to the opposite end zone didn’t count, the sudden shift in momentum is what Malzahn felt was the turning point in the contest.

“I thought probably the play of the game was right there before halftime. They had the ball on the half-foot line, and we picked it,” Malzahn said. “Of course, we went for six and it got called back but still just the momentum and not giving up any points. We still had the lead at halftime, which was huge.”

The Tigers went into halftime and regrouped with a message that hearkened to the days of Pat Dye: play 60-minute football. Auburn linebacker Owen Pappoe said the players showed no signs of panic at the break, and defensive coordinator Kevin Steele went over the misfits and busted coverages from the first half before returning to the field.

Kentucky was limited to just one yard on its first two possessions after the intermission. While the Wildcats responded with a touchdown drive near the end of the quarter, Auburn’s dominance to start the quarter only set the stage for how the fourth played out.

After a Kentucky fake-punt went nowhere and led to another Nix passing score, the Tigers’ defense closed things out by forcing a three-and-out and then dashing the Tigers’ hopes when McCreary came up big again with a forced fumble, which Pappoe recovered.

For Pappoe, who ended the day with eight tackles and one sack, the strong finish after a so-so start was only natural given how long the Tigers had gone without a game.

“I think, obviously, with the first game since last year — since earlier this year in the bowl game — we had some rust to knock off. At the end, we ended up pulling through and did a good job,” Pappoe said. “We're going to correct all the mistakes we made this week in practice, so we're going to be even better next week.”

The Tigers were on their heels at times Saturday, although even their worst points only led to seven points for Kentucky in the first half and six in the second. Now, Auburn hopes to grow from the performance when it hits the road to face a Georgia offense that is still trying to figure things out.

“It's the saying that everybody knows: It's not about how you start. It's how you finish,” Pappoe said. “We were rusty the first half, but we knew we had to come out the second half and execute. We just knew the ultimate goal is to win. That means do whatever you can. No matter what the situation is, make sure you win. We just knew the ultimate goal, and everybody kept the course.”

“We’re just going to stay together.”

'That starts with me': Gus Malzahn knows corrections for Auburn begin at the top

The Auburn Tigers had several errors against South Carolina on Saturday that led to their second loss in three weeks. While there was a lack o…

Auburn drops out of polls after South Carolina loss

After two losses in three weeks, the Auburn Tigers have dropped out of the polls.

After a strong 2019-2020 season that was cut short, the Auburn men’s basketball team is set to face one of the Big 12’s best this winter.

For the past five years, Bret Holmes has balanced life as an Auburn University student and a racecar driver. On Friday night, Holmes’ hard work paid off in a big, big way.

A look at the key storylines along with our staff's predictions for Auburn's road game at South Carolina on Saturday.

'Got to man up': Accountability crucial as Auburn looks to course correct

“We're capable of being a good team, and even though we had the turnovers, we did some things better than we did last week. We’ve got to keep improving.”

An Auburn fan wears a mask in the stands before the Auburn and Kentucky game on Saturday.