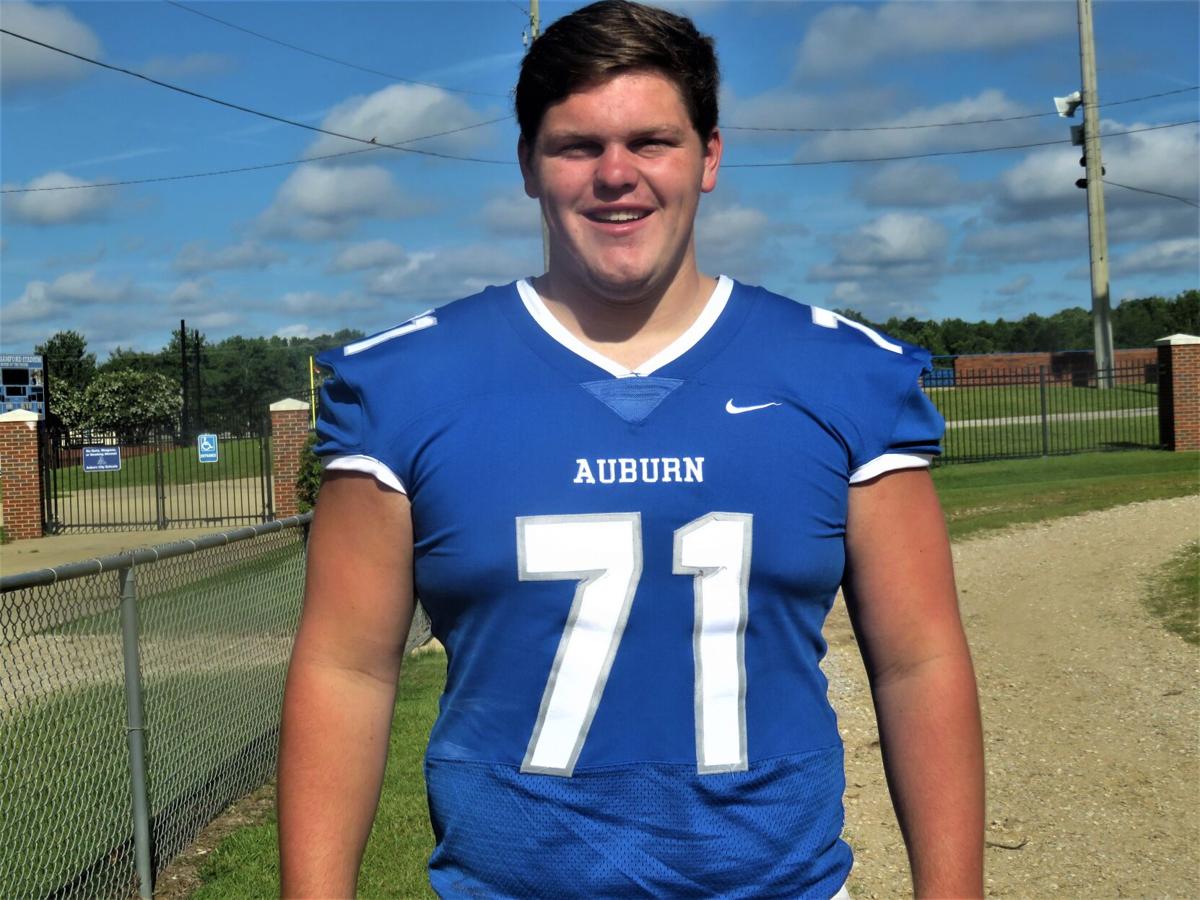 Auburn High center Cort Bradley has shined throughout his high school career and has decided to walk on at Auburn University.

A young Cort Bradley shows off his Auburn football and hat while wearing a Nick Fairley jersey. Bradley announced Tuesday he will be a walk-on offensive lineman for the Tigers.

Auburn High offensive lineman Cort Bradley remembers watching the Auburn Tigers win a national championship when he was 8 years old and his father, Royce, saying one day he could be playing on the same field.

Back then, Bradley was just a kid sporting an AU hat and the jersey of his favorite player, Auburn defensive tackle Nick Fairley. Now, Bradley has come into his own as an offensive lineman, and he's fully prepared to fulfill the fantasy his father had a decade ago.

Bradley announced Tuesday he will join the Auburn football team as a preferred walk-on. The 6-foot-4, 305-pound Bradley will be staying close to home after previously committing to UAB over the summer and receiving scholarship offers from 16 schools.

"My parents have had season tickets in the same spot for the past 15 years, so every game I know where they're going to be sitting. To know that I'll have a student section full of people that I already know cheering for me, it just motivates me," Bradley said. "I think it's another level, especially growing up here, going to the games for all those years and then finally getting to step out on the field.

"It's kind of a lifelong dream. I know it's kind of cliché, but you grow up an Auburn fan, and when you finally get to put a jersey on it'll finally come true."

Bradley explained playing football at Auburn was intriguing given the conversations he's had with Auburn director of high school relations Ross Newton along with Auburn offensive line coach Will Friend. Further conversations with former Auburn High teammate Tommy Nesmith -- who is a walk-on wide receiver for the Tigers -- further piqued his interest.

As attractive as the football aspect was, it wasn't the only major draw for Bradley.

Bradley hopes to become a pilot, which was a goal he worked toward this past summer when he earned his private pilot license. His father has a license and Bradley's brother, Chase, graduated from Auburn's aviation school this past year, and the appeal of studying in one of the premier aviation schools was too good for Bradley to pass up.

Bradley said he was not aware of the university's plans to build a flight simulator in the football team's new $91.9 million facility, but he laughed and said he's prepared to teach some of his future teammates how to fly.

"Just seeing [Chase's] job, I really wanted to go into that career field," Bradley said. "Auburn just made the most sense with the great football opportunities and the great career choices that I could have."

Bradley has goals outside of football, but he proved in high school he could hold his own against some of Alabama's top defensive linemen.

Bradley closed out his playing career at Auburn High by grading out at over 90 percent as the center for an offense that averaged just under 30 points per game. With Bradley's help, the Tigers won 12 games in 2020, captured their first region title since 2013 and played for the Class 7A state championship.

Bradley's play earned him a Blue-Grey All-American Bowl invitation and led to his selection as a first team All-State and first team All-Area offensive lineman.

“He really understands the game, loves the game and wants to be good. He’s a great example of hard work, leadership, toughness and what it takes to be a great lineman,” then-Auburn High coach Adam Winegarden said last summer. “The center position is obviously the quarterback of your line of scrimmage. I think every offense starts from the inside out. He’s the anchor of our line of scrimmage. He makes all the calls and also sets the tone each play.”

Bradley spoke highly about his experience at Auburn High, saying his senior year was one of the best anyone could ask for and that playing in the state championship game alongside his friends created lifelong memories. He said he felt Auburn High prepared him both on the football field as well as in the classroom, where he said most of his teachers pushed him to be as responsible as he'll have to be as a college student.

Bradley's future is a bright one, and he has high aspirations for himself as he takes the next step in his life. He hopes to find ways to become a leader inside Auburn's aviation program, and as far as football, he's eager to soon measure himself against top-tier college football players.

"Coming in as a freshman already having my [private pilot] license, I'll be ahead of most people. That would be just really nice to get a leadership role there," Bradley said. "I'm also really excited about the weight-room transformation that will take place, just getting stronger and faster. I think I'm most excited about that and just seeing where I stand on the football field with these guys, with these SEC-caliber athletes."

Former Tennessee defensive end signee Dylan Brooks committed to Auburn on Saturday. The news comes after Brooks was finally released from his national letter of intent on Friday.

"I grew up an Auburn fan just from the day I was born ... Just getting an offer from the team you watched growing up and the stadium you go to most is just a great feeling."

Auburn guard Sharife Cooper was sidelined with an ankle injury, and the Tigers failed to keep pace offensively in a 74-57 loss to Florida on Tuesday night.

Former West Virginia cornerback Dreshun Miller announced his commitment to Auburn on Monday. The news comes after Miller completed his junior season with the Mountaineers.

Auburn High center Cort Bradley has shined throughout his high school career and has decided to walk on at Auburn University.

A young Cort Bradley shows off his Auburn football and hat while wearing a Nick Fairley jersey. Bradley announced Tuesday he will be a walk-on offensive lineman for the Tigers.