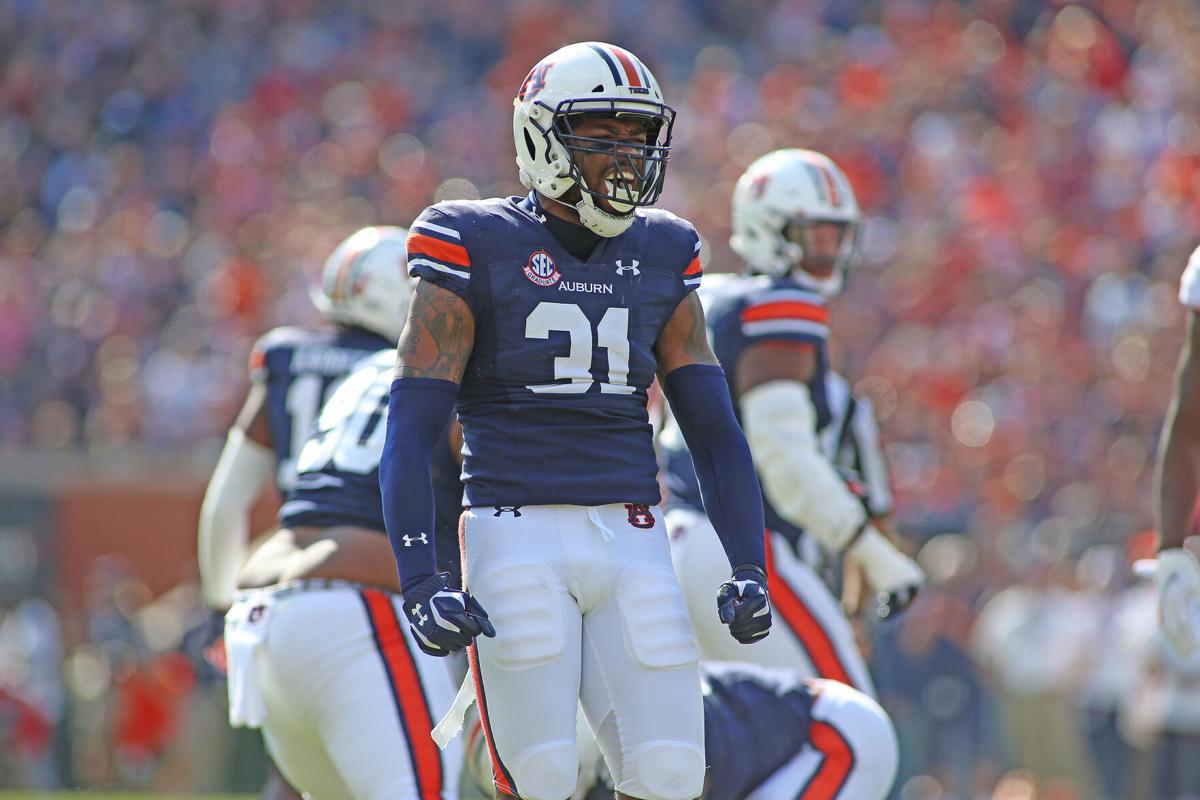 Auburn linebacker Chandler Wooten (31) reacts during the Tigers’ game against Georgia on Oct. 9 at Jordan-Hare Stadium. 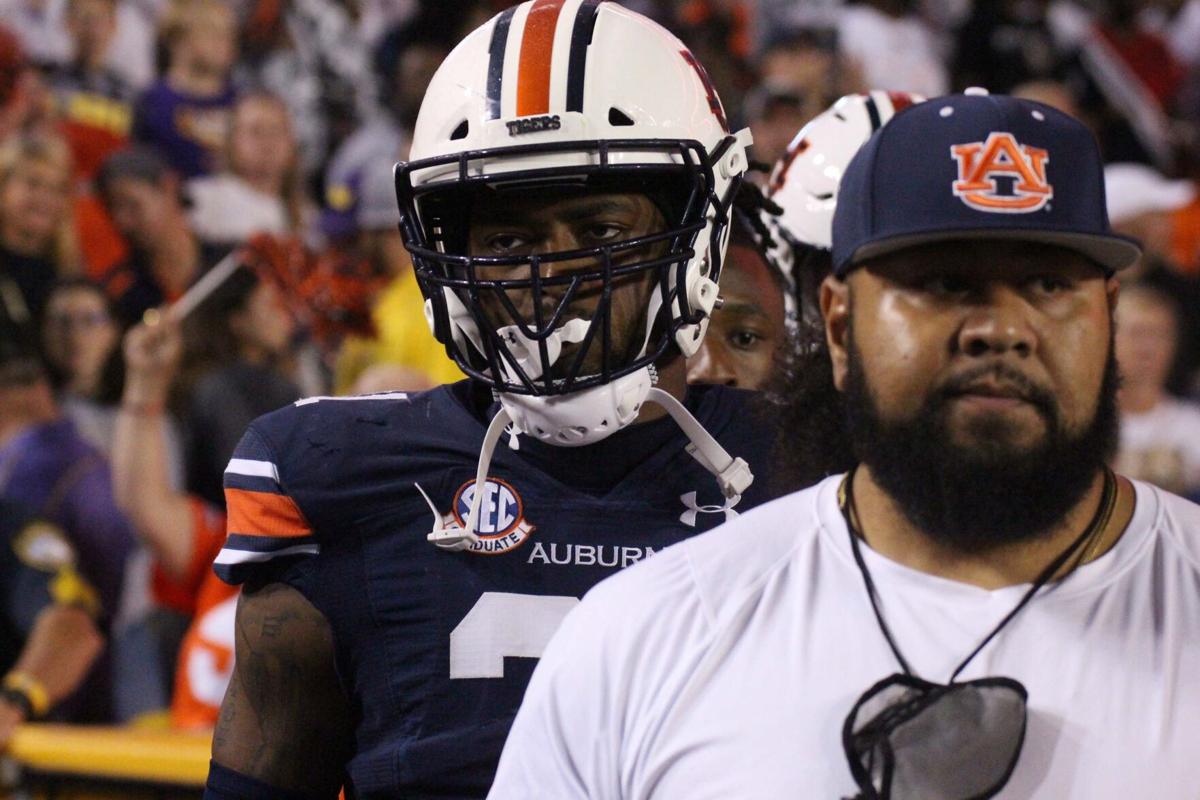 Auburn captain Chandler Wooten walks out on the field before Auburn’s game at LSU on Oct. 2 in Baton Rouge, La. 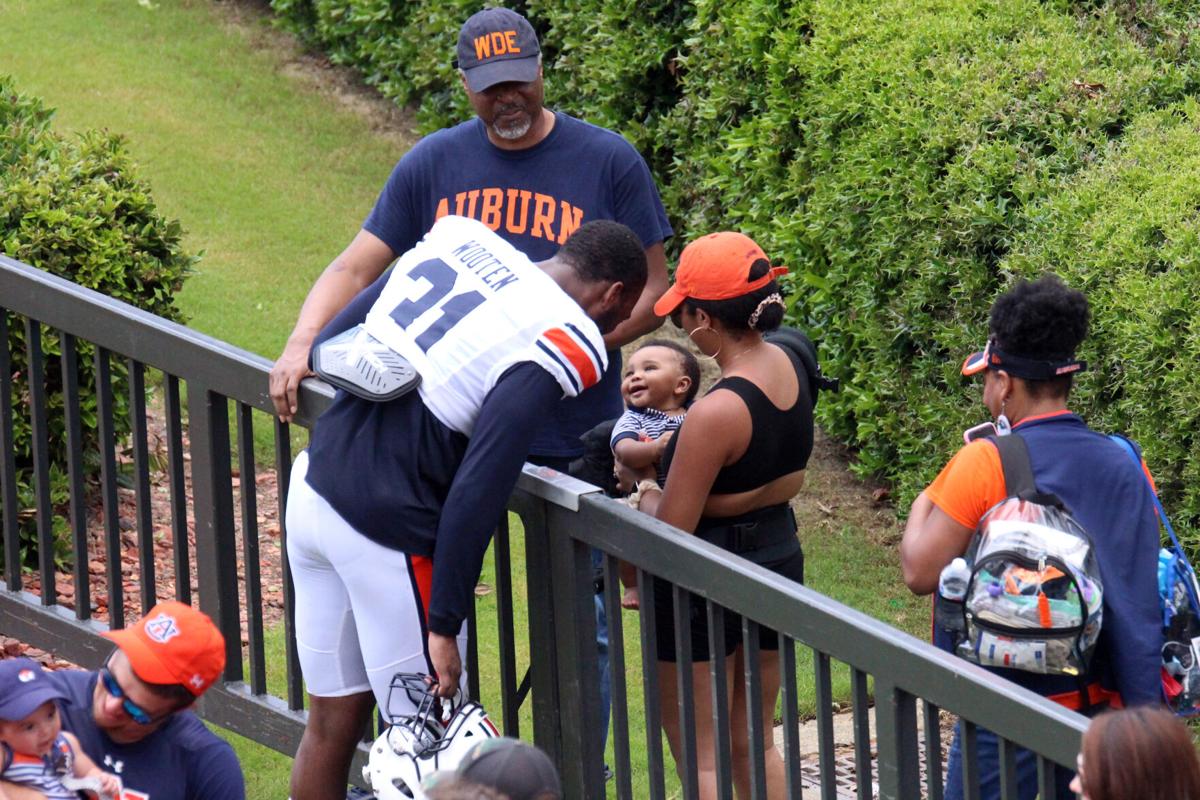 Chandler Wooten greets his son Chance on Aug. 28 after an open practice inside Jordan-Hare Stadium

Following Auburn’s disappointing loss to Georgia last Saturday, senior linebacker Chandler Wooten stood up and spoke to the media along with a handful of his teammates.

Wooten was composed and deliberate in discussing what happened, and his disappointment about coming up short was easy to recognize. Still, the senior stayed calm as he talked about growing from the moment and moving on, a tactic he’s developed during his time at Auburn.

“Everybody’s disappointed, man. We expected to win and we didn’t. Like I keep saying, hats off to [Georgia]. They made the plays and we didn’t,” Wooten said. “We’ve got to get back to the drawing board and get better in all three phases. We’re not where we want to be, whatsoever. We didn’t play our best football today, so we still feel like our best football is ahead of us.”

Wooten’s comments demonstrated the leader he’s become this season, not only as one of the team’s two permanent captains but as a playmaker who’s taken on a bigger role than most expected.

Wooten has been tasked with stepping up in the absence of junior linebacker Owen Pappoe, a fellow captain who has missed the Tigers’ last three games due to an apparent leg injury. The extra responsibility hasn’t overwhelmed Wooten at all; instead, he’s met the challenge and has 43 tackles, three tackles for loss and a pass break-up through six games.

For someone who wasn’t with the team in 2020, Wooten has wasted little time proving he’s up for the moment.

“He’s a captain for our team, so that speaks volumes to a guy that wasn’t here last year,” EDGE Derick Hall said. “He’s able to come back in and take that leadership role and help this team move in the right direction.”

Wooten recorded 27 tackles as a junior in 2019 and was expected to play significant snaps in 2020 before the pandemic and his personal life led to a tough decision.

Wooten’s girlfriend, Camryn Collins, was pregnant with their first child, leading Wooten to opt out of what would have been his senior season. Wooten’s plan from there was straightforward: he would be there for Camryn and their child, he would keep working out and he would return to the Tigers in 2021.

Chance Wooten’s arrival on November 8, 2020 offered Wooten time to spend with his growing family before rejoining the team. While raising a son offered newfound duties in his everyday life, Wooten learned early on how to balance family time while staying committed to a return to football.

That doesn’t mean it was a seamless transition back, though.

Wooten had to prove himself to the Tigers’ new coaching staff led by Bryan Harsin, who admitted he initially had questions about Wooten’s commitment. Once the two talked, however, the new Tigers head coach understood Wooten’s dedication to the team and his capacity to lead.

With Harsin on board with Wooten’s return, the focus became on getting Wooten back in game shape, something easier said than done for someone who hadn’t played since the 2020 Outback Bowl.

“You know, being gone for that amount of time, it was definitely strange,” Wooten said on April 9. “Getting back out there on the field is definitely a transition period. I’m not where I want to be yet, so just trying to get better every day.”

Wooten kept working hard through the spring and summer and into fall camp. His efforts didn’t go unnoticed by his teammates, who selected him as a captain prior to the team’s season-opening game against Akron.

Wooten had solid showings against the Zips and against Alabama State before an unfortunate turn of events put even more on his plate.

Pappoe left the Penn State game early due to injury, which forced Wooten to take on more responsibility. Wooten became the Tigers’ second starting linebacker alongside senior Zakoby McClain but had little issue in doing so, as Wooten ended the loss against the Nittany Lions with 10 tackles.

Wooten has been a welcomed sight for Harsin, who realizes what losing a player of Pappoe’s caliber could have done to his defense.

“[Chandler has] filled that role, which is what good players do,” Harsin said. “He’s obviously a leader on this team, but to me he’s one of those guys you want to have. You want more guys like him with that kind of attitude and mentality and work ethic and focus and drive and all those things that really make someone successful.”

For Kelvin and Sandra Wooten, their son’s efforts have been enjoyable but not at all unexpected.

“To see that hard work paying off, it just goes to our family mantra, which is ‘Expect extraordinary,’” Kelvin Wooten said. “You know, if you put in the work toward your goals, you should expect to achieve them. At this point, he’s doing that, so I’m happy for him.”

Wooten’s performances this fall have been worthwhile, but they’re even more special since Chance has been along for the ride.

Kelvin explained Chance has attended every game this season except Penn State and LSU, and the 11-month-old has often been at practice while his dad was hard at work. Kelvin said he could have never handled everything his son is right now — football, an infant child and class responsibilities at 22 years old — but added Wooten gets to see his why every time he looks at Chance.

Sanda Wooten explained she already loved taking photos to capture memories, but it’s reached a new level thanks to her grandson.

“I’m taking those moments in in pictures so he [Chance] can look back and see how much of a part of the journey he was and how Chandler loved having him involved and there,” Sandra Wooten said. “Just to be able to have those memories etched out, it’s been wonderful.”

Wooten has embraced beginning a new phase of his life while still playing college football, and the results have been hard to ignore. Along with his excellent play has been his presence among his teammates, one that’s become more important while Pappoe has been out.

Wooten looks to add to his impressive season on Saturday, when all eyes will be on No. 31 to step up and sound off yet again.

“I think the team needs me, for sure,” Wooten said after the Georgia game. “Coming off a loss like this and going into a game, an 11 a.m. on the road, Arkansas, leadership definitely has to step up. And not just me: we have a lot of great leaders on this team. So everybody who considers themselves a leader has to show up this week.”

Auburn linebacker Chandler Wooten (31) reacts during the Tigers’ game against Georgia on Oct. 9 at Jordan-Hare Stadium.

Auburn captain Chandler Wooten walks out on the field before Auburn’s game at LSU on Oct. 2 in Baton Rouge, La.

Chandler Wooten greets his son Chance on Aug. 28 after an open practice inside Jordan-Hare Stadium