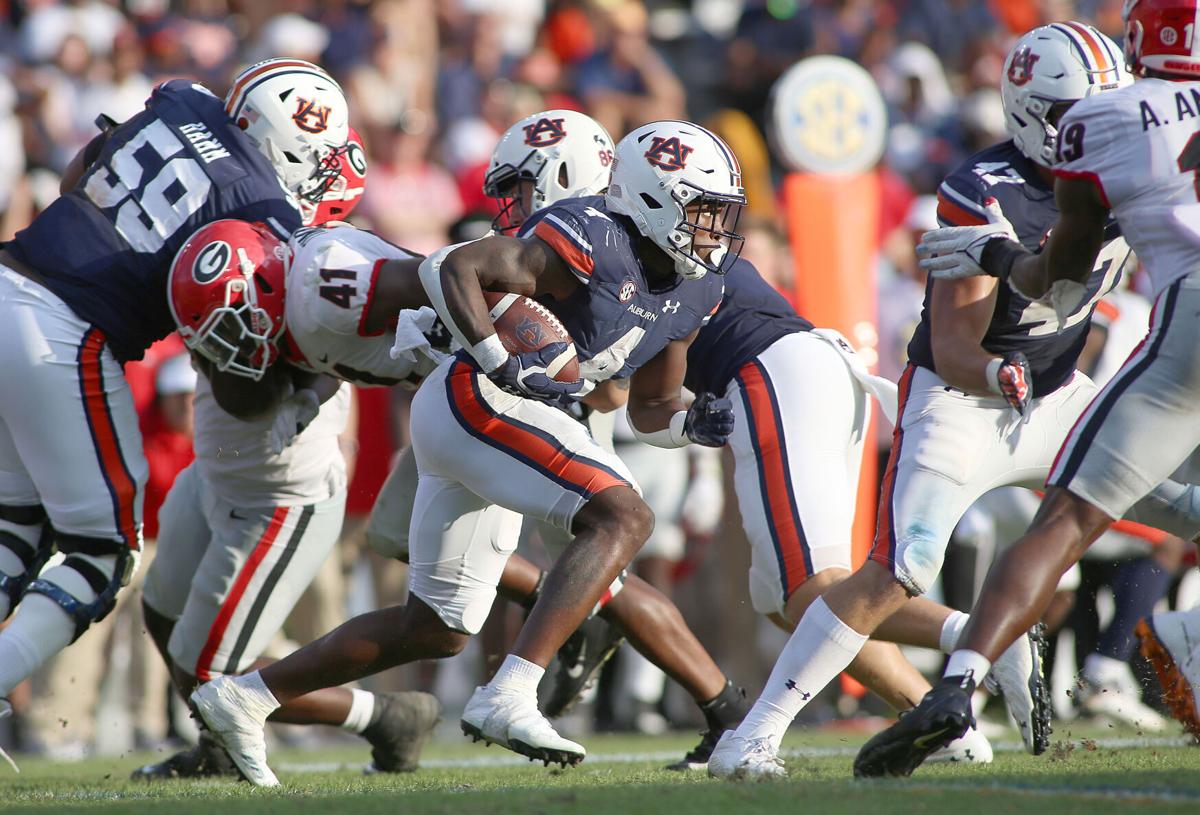 Auburn running back Tank Bigsby (4) runs against Georgia on Saturday at Jordan-Hare Stadium. 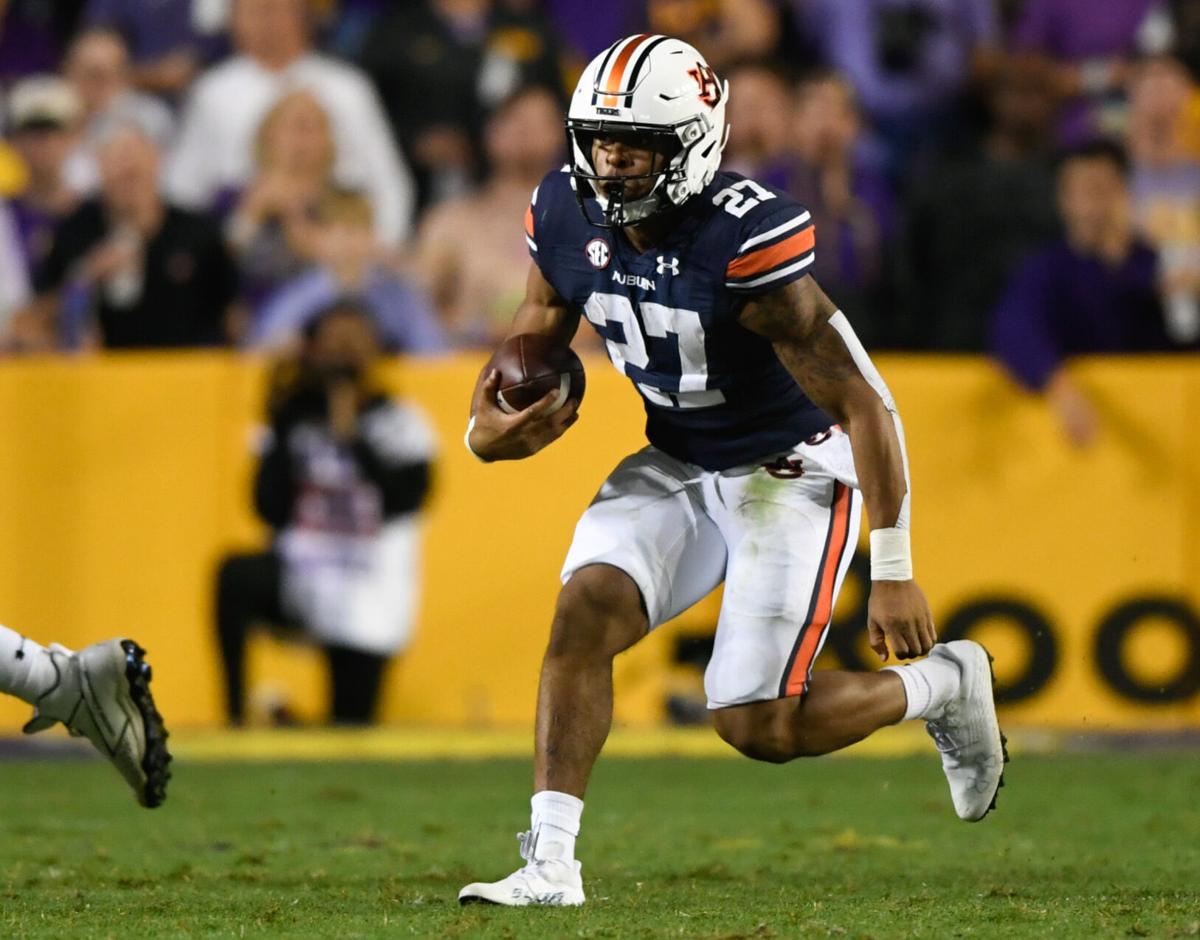 Jarquez Hunter (27) runs the ball against LSU on Oct. 2 in Baton Rouge, La.

One of Auburn’s perceived strengths entering the fall is now the focus of genuine intrigue entering the Tigers’ seventh game.

The Tigers’ run game struggled at times against Georgia State and LSU but did well on the whole by rushing for over 160 yards and at least 4.7 yards per carry in those two victories. The tune changed dramatically last Saturday against Georgia, as the Tigers only averaged 1.59 yards per carry and posted their lowest rushing yard total since playing Georgia in October 2020.

Auburn has relied heavily on its passing game the last two weeks, something Auburn head coach Bryan Harsin explained was a direct product of playing from behind early on in both contests.

“Ideally you want to run the football. One way to do that is stop losing early; that’s a way to do that. So don’t get behind and stay in a position where you can run the football,” Harsin said. “That’s the identity that we’re working toward is being a team that can run the ball, that can be physical — yes, we want to be downhill in all those things, but we have to actually do that.”

The Tigers have turned to their tailback duo of Tank Bigsby and Jarquez Hunter the last few games and the results have been mixed – especially for Bigsby.

Bigsby started the year strong with three straight 100-yard games, but over the last three contests he’s combined for only 115 yards. Auburn trailing Georgia on Saturday led to a particularly limited role for Bigsby, who only took 10 carries for 28 yards, though he did score on a 6-yard carry for the Tigers’ only touchdown of the 34-10 loss.

From a per-carry basis, Bigsby’s efforts against the Bulldogs were his least productive in a game in which he took at least 10 carries. The sophomore did reel in three receptions for 22 yards during a contest in which the Tigers’ tailbacks had 35 receiving yards, but the impact was minimal in the game’s ultimate outcome.

While Bigsby is the obvious face of the Tigers’ running game, Harsin made it clear it’s not only on No. 4 to make plays happen.

“It's not just Tank – it's everybody,” Harsin said. “Everybody on the offensive side of the ball that has to be able to do that: o-line, tight ends, wide receivers, running backs, everybody's got a piece of the pie when it comes to the run game. That continues to be something that we've got to focus on and doing the things we know we're capable of doing but doing it consistently."

The challenge now becomes running the ball against the Razorbacks, which on paper looks like a favorable matchup for the Tigers.

Arkansas struggled mightily to stop the run against Ole Miss last week, as the Rebels ran for 324 yards and five touchdowns in a 52-51 overtime victory. The mark made by Mississippi stood as the most yards the Razorbacks have allowed the ground since November 2019, and it stood as the fourth straight game in which Arkansas’ opponent rushed for at least 4.3 yards per carry.

Auburn came into the season with the reputation of a run-first team that hoped to open up its passing game off its strong ground game. Because of game situations, the Tigers have thrown 33 more times than they’ve run to open SEC play.

The Tigers hope they can dictate their style of play against the Razorbacks on Saturday. If they do so, that should mean more hard-nosed runs from Bigsby, Hunter and senior Shaun Shivers.

“We’ve got opportunities to [run the ball]; we’re just going to have to keep working on it and keep getting better at it,” Harsin said. “It doesn’t change who we want to be. It doesn’t change the fact that that’s a goal of ours in the identity of what this offense should look like. At the end of the day, we’ve got to do it.”

Auburn running back Tank Bigsby (4) runs against Georgia on Saturday at Jordan-Hare Stadium.

Jarquez Hunter (27) runs the ball against LSU on Oct. 2 in Baton Rouge, La.