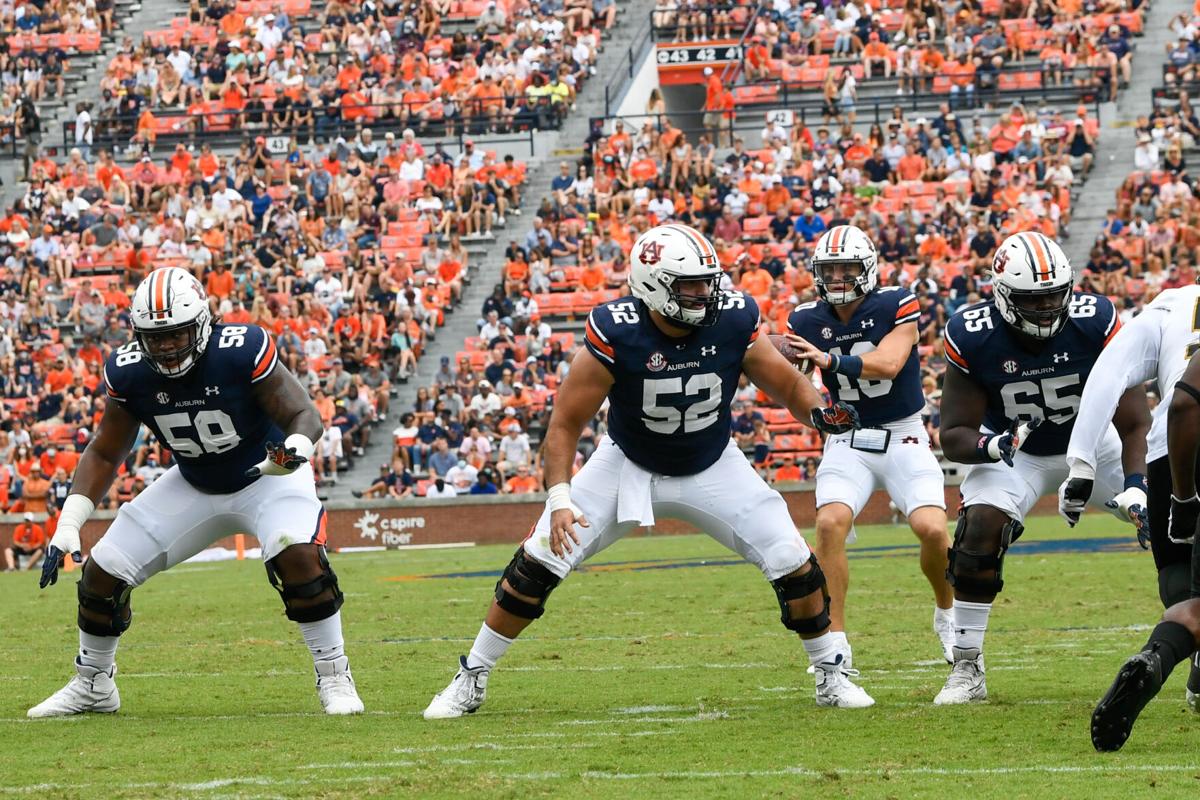 The Auburn offensive line prepares to block during the Tigers' game against Alabama State on Saturday in Jordan-Hare Stadium. 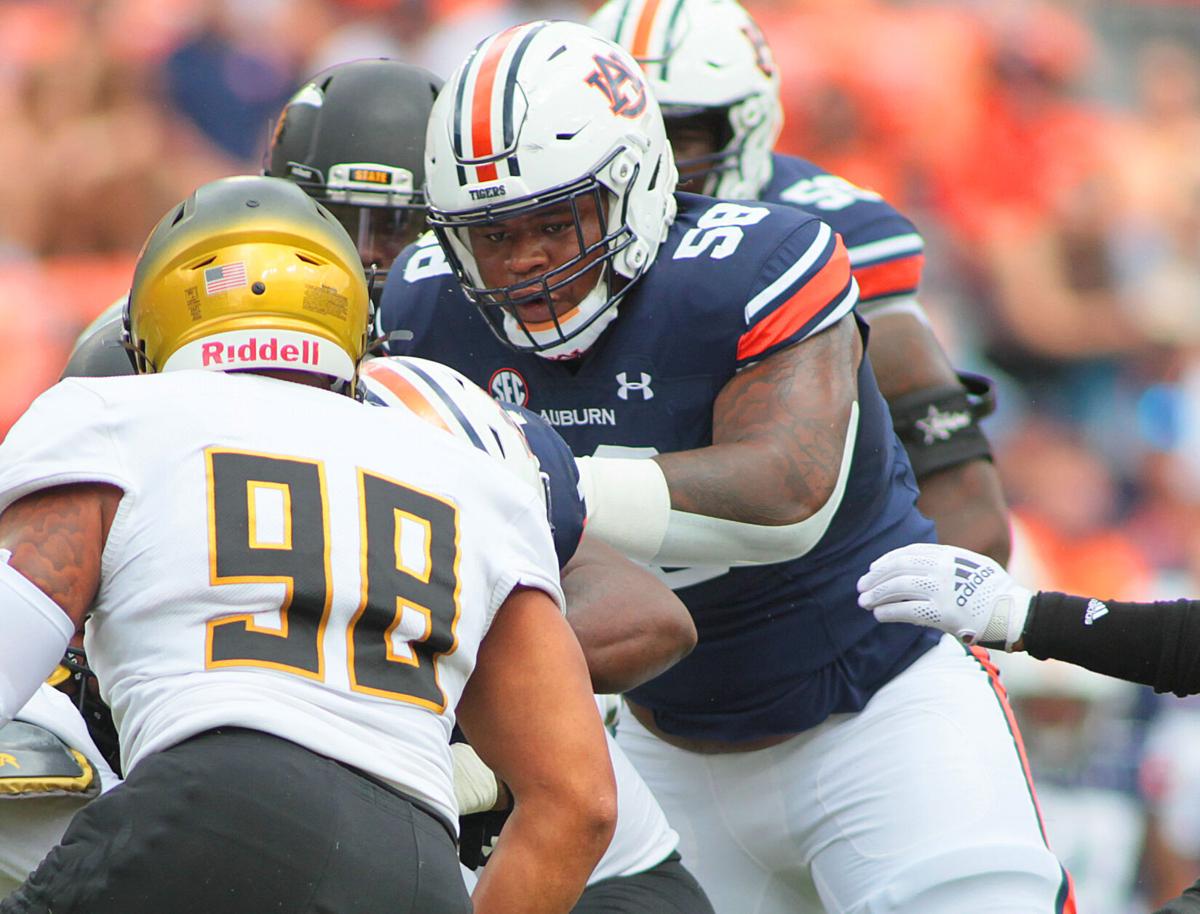 Through two games, the Auburn offensive line has held its own and set the path for the Tigers to be the top-scoring offense in the nation.

If the Tigers are able to have even somewhat similar success this week, it won’t come without another solid showing from the big men up front.

While Auburn head coach Bryan Harsin said on Monday he was pleased with how the line has come together to start the season, he understands there’s still room for improvement.

“I think the O-line has done a good job. I think they’ve been solid. I think we’ve improved in some areas. I think we need to continue to be consistent,” Harsin said. “There’s still one or two guys in there we need to lock in even more and get a little bit better so we can be stronger with those five. And then the seven guys that kind of rotate in and out, and we can be really strong with those seven guys.

“We’re developing that really each and every day. I think we’ve improved. This week is another opportunity for them to keep developing and hopefully shining when we get a chance to go out there and play Saturday.”

The line’s consistent play to start the season has opened the door for relative balance given the circumstances.

Auburn has run the ball 71 times through two games compared to 45 pass attempts, though that number is a bit misleading. Auburn only ran five more times (32) than it passed against Akron, and Auburn’s 17 carries compared to one pass attempt in the fourth quarter of the Alabama State game certainly tipped the scales further on the run side than had the game been more competitive.

With the line holding its own, Auburn has averaged 9.58 yards per carry – the best average in the country – and only allowed one sack so far.

That effective play, of course, came against a MAC team and a SWAC team, which aren’t quite to the level of the Big Ten squad that awaits the Tigers on Saturday.

Harsin commended Penn State’s defensive front and said the Nittany Lions do a very good job. He spoke highly of the team’s linebackers – a position that has traditionally been a strength for Penn State – and added their defensive line plays hard.

The Nittany Lions don’t lack for production among a defense that held Wisconsin to 10 points then surrendered 13 to Ball State one week later. Junior linebacker Ellis Brooks leads Penn State with 15 tackles this season, and on the line defensive end Arnold Ebiketie has registered 11 tackles, three tackles for loss and one sack.

As a defense, Penn State is tied for third in the Big Ten by forcing five turnovers through two games.

Harsin acknowledged the threat the Nittany Lions will present on Saturday and explained the Penn State coaches create challenges schematically with their defensive front. The first-year coach said his offensive linemen understand what awaits them in State College, and he knows it will take a total team effort for the group to be adequately prepared.

“We need a great look from our scout team,” Harsin said. “The guys that are on the scout team and all that, they can’t go out there and be lazy and give us cruddy looks and not go hard and not care about their importance of getting our offensive line ready.”

Hot Or Not: Justin Fields will be next rookie QB to get first career win?

Auburn gymnastics star Suni Lee made her debut on Dancing With The Stars on Monday night, introducing herself to a new worldwide audience and …

If Auburn wins at Penn State, Tiger fans win (collectively) a $1,000 worth of drinks at this bar

After all the talk about discipline and stadium stairs, Auburn got cute.

Auburn football is bringing the ‘White Out’ to Penn State in its own way.

Let's dive into some of the storylines that stood out at the end of Auburn's loss to Penn State, including Tank Bigsby eclipsing 100 yards for the fourth straight game.

A late turnover on downs proved critical for Auburn in a 28-20 loss to the Nittany Lions. The loss featured significant struggles by the Auburn pass defense.

Auburn running back Shaun Shivers and cornerback Jaylin Simpson will not be available for the Tigers’ showdown against the Nittany Lions on Saturday night.

Auburn will have home games vs. Missouri, Arkansas, LSU and Texas A&M and will face Alabama, Georgia, Mississippi State and Ole Miss on the road in 2022, the SEC announced Tuesday.

“You’ve got to leave no stone unturned and prepare yourself in a way that you’re going there to win — not just be a part of it."

The Auburn offensive line prepares to block during the Tigers' game against Alabama State on Saturday in Jordan-Hare Stadium.