Alabama quarterback Bryce Young (9) looks to throw against Arkansas during the second half of a game on Nov. 20 in Tuscaloosa. 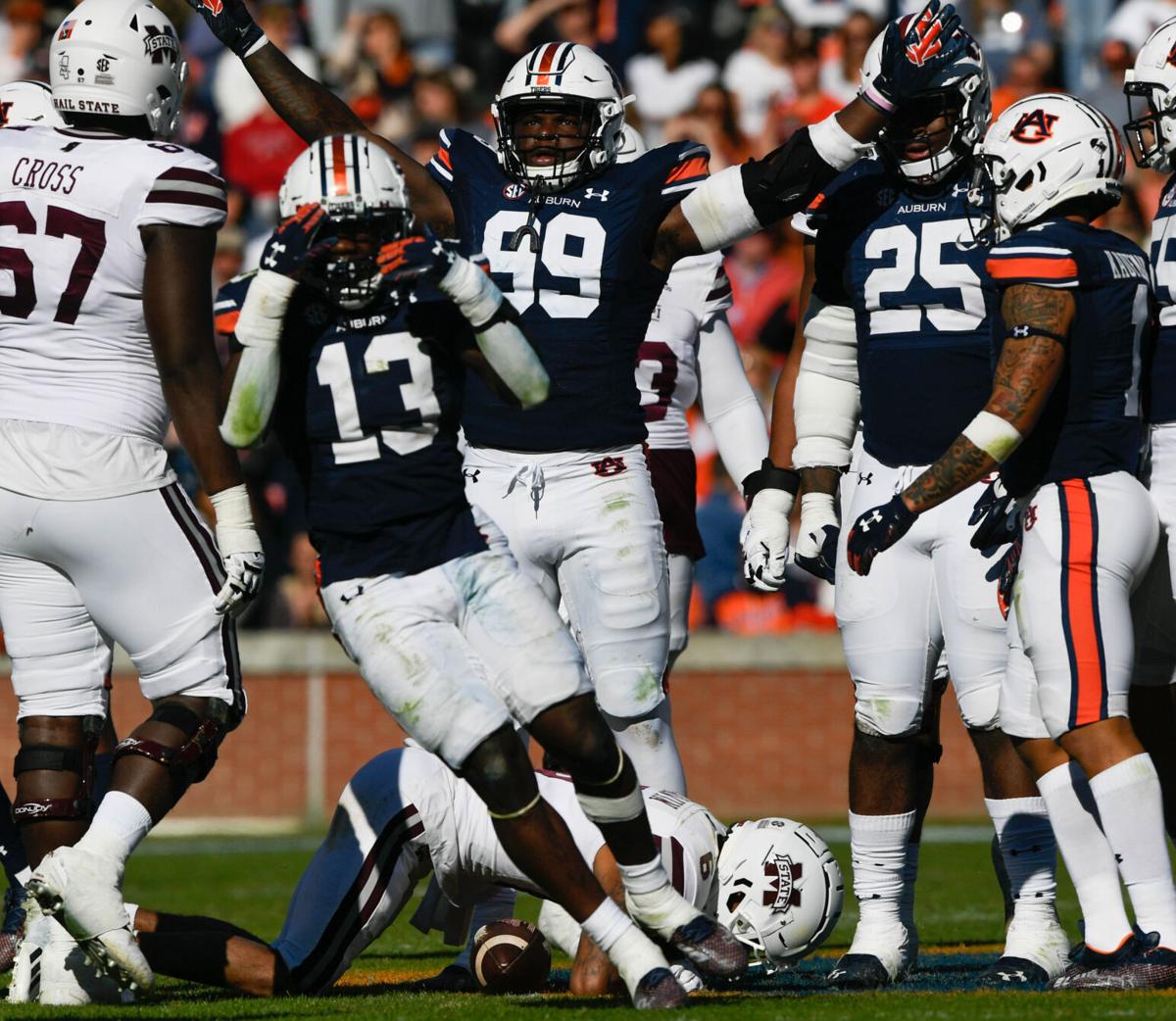 The Auburn defense celebrates during a game against Mississippi State on Nov. 13 in Auburn.

The Auburn defense understands the task at hand Saturday afternoon is a big one.

The Tigers face the challenge of slowing down an Alabama offense headlined by quarterback Bryce Young, whose steady play has propelled him among the favorites for this year’s Heisman Trophy. Young is coming into the Iron Bowl fresh off arguably his best performance of the season, which only has the Tigers more focused for their showdown.

“I think he’s got a good understanding of what they’re doing as you watch the tape,” Auburn head coach Bryan Harsin said of Young. “For sure feels like he’s got a good feel for what they want to accomplish each and every play, where he needs to go with a ball in different situations and things that may cause some disruption.

“It’s not just about what we do up front; it’s really the entire defense. You’ve got to be in position consistently against good teams.”

Young has shined throughout his first season quarterbacking the Crimson Tide, but Alabama’s latest game against Arkansas might have been his best. Young was outstanding last Saturday, as he went 31-of-40 passing for a school-record 559 yards with five touchdowns to help the Crimson Tide top the Razorbacks 42-35.

While Young seems to have taken a step forward over the last few games, Alabama head coach Nick Saban explained it’s really been much of the same from the sophomore.

“He’s played very well in most of the games this year,” Saban said of Young. “He’ll be the first guy to say there’s things he could have done better on the few plays he might have had an opportunity to do something different. But that’s the right kind of mindset to have to be able to continue to improve and make progress, which he’s always done a good job of.”

Auburn EDGE rusher Derick Hall is among the players tasked with not letting Young get comfortable Saturday.

Hall credited Young with being a good competitor and a stellar football player. He noted Young is smart for his age and emphasized how good he is on his feet, something Hall and his teammates are looking to disrupt in Saturday’s meeting.

Hall emphasized the importance of the defensive linemen keeping contain against the sure-footed Young and wrapping him up the times they get a hand on him. Hall also agreed when asked about creating a pass rush from all three levels of the defense, saying the defensive line and their teammates in coverage must work together in order to limit the Crimson Tide.

“I think it’s pretty important, just really rush and coverage working together so the guys on the back end, you know, playing top-down and just giving us enough time to be able to try and get a chance to get home with a guy like him,” Hall said. “Coach [Derek] Mason will do a great job of dialing up the scheme for us to try to be successful, so we’ll just try and put that plan in place.”

Harsin was sure to point out Young wasn’t all Alabama had — he specifically named wide receivers John Metchie II and Jameson Williams along with running back Brian Robinson as other playmakers Auburn must account for.

Harsin recalled watching Young during his high school years at Mater Dei High School in California, the place where Young became a major college recruit and showed flashes of the college player he would soon become. Harsin emphasized the Tigers’ preparation throughout this week, all the while knowing it comes down to executing to stop No. 9 come game time.

“He was a very good player then and has improved even more. You can see the growth, maturity he’s made through this season,” Harsin said. “[He’s shown] toughness, the way he’s playing and how he’s got that offense moving and running and doing a lot of different things that are very difficult for the defenses, so I’ve been very impressed with him.”

Alabama quarterback Bryce Young (9) looks to throw against Arkansas during the second half of a game on Nov. 20 in Tuscaloosa.

The Auburn defense celebrates during a game against Mississippi State on Nov. 13 in Auburn.