Auburn quarterback Bo Nix (10) warms up before the start of a game against Mississippi State on Nov. 13 at Jordan-Hare Stadium. 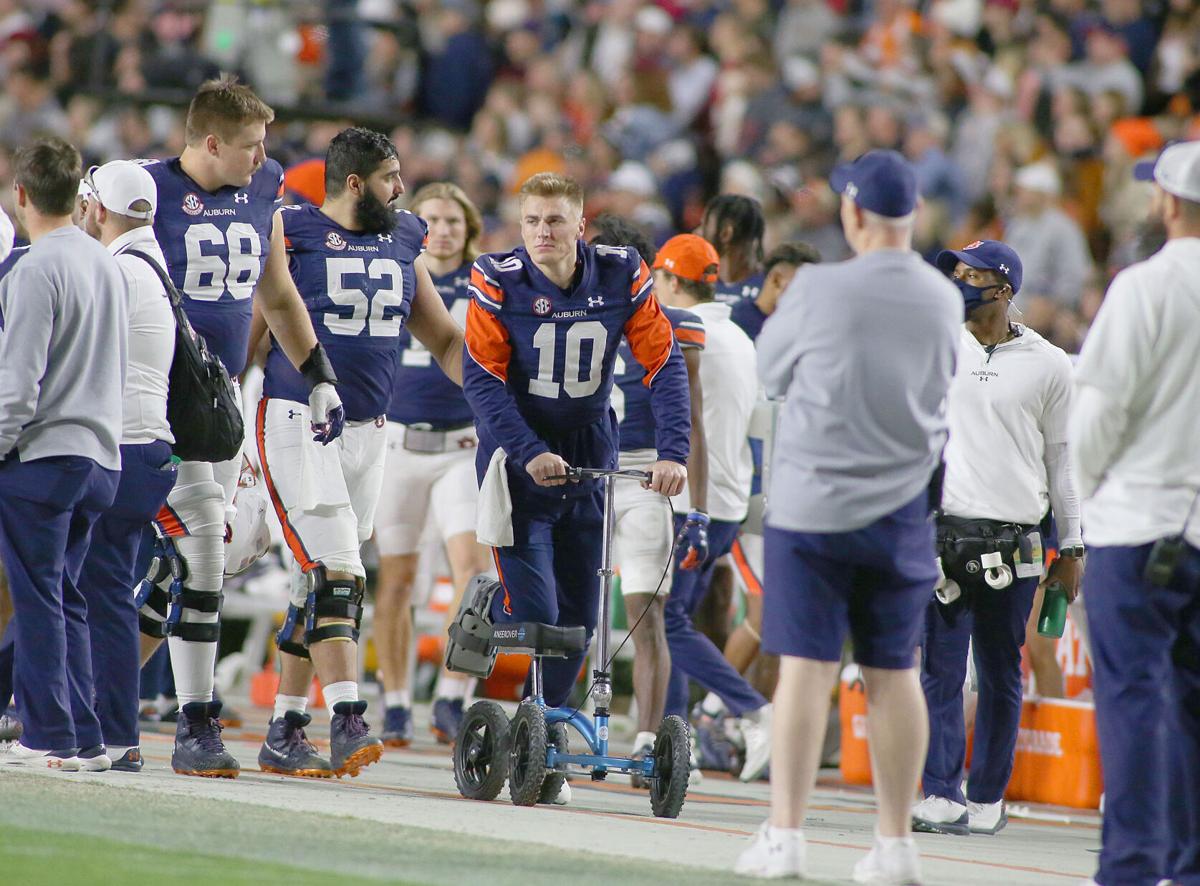 Auburn quarterback Bo Nix (10) looks on from the sidelines Saturday at Jordan-Hare Stadium.

Auburn quarterback Bo Nix has some decisions to make in the coming weeks and months.

Nix appeared on The Next Round radio show Monday and was asked about his future at Auburn. Nix explained he’s just a few weeks from graduating and while Auburn will always be his school, he was non-committal about returning to the Tigers in 2022.

“I have graduated in three years. That was my goal coming in, so Auburn is definitely my school. I think it will always be my school. But obviously right now, I’m just trying to get healthy,” Nix said. “You know, I’m not sure what next year looks like. I’ve got to get my ankle better first, got to make sure I can play and get back to my normal self and then obviously I’ll graduate, get through the bowl game.”

Nix explained he and other juniors along with players who have the extra year of eligibility due to the coronavirus are in the same boat as far as weighing their options. Nix added he wasn’t sure what he’ll do before emphasizing his focus right now was getting healthy.

When asked by The Next Round hosts what factors will go into a decision regarding a return to Auburn or playing somewhere else, Nix said the chance to play at the next level was an important factor.

“My ultimate goal is to play in the NFL, and so, depending on that, obviously that’s got a lot to do with it moving on in the future,” Nix said. “Then looking back, we’ll just see what’s going on, what has changed and then make a decision from there.”

This season, Nix completed 197 passes on 323 attempts for 2,294 yards with 11 touchdowns and three interceptions in his third season as Auburn’s starting quarterback. He also rushed 57 times for 168 yards and four additional scores and set new career bests with completion percentage (61.0), passing yards per game (229.4) and quarterback rating (130.03).

Nix came up limping late in the third quarter of Auburn’s game against Mississippi State on Nov. 13 after taking a hit from Bulldogs defensive tackle Jaden Crumedy on what wound up being a 44-yard completion from Nix to Ja’Varrius Johnson.

Nix stayed in the game for the next three drives before giving way to backup TJ Finley for Auburn’s final drive of the afternoon. Nix ended the game 27-of-41 passing for 377 yards with two touchdowns and no interceptions.

“Just got a little nicked and injured for a minute. Not quite sure obviously moving forward — going to get that looked at but it was just alright and I was able to obviously continue to play a few more drives,” Nix said after the game.

While Nix didn’t definitively say he’d be back at Auburn for his senior year, he added he hasn’t decided on anything quite yet.

“It’s too big of a decision to make in about a week or over the phone on an interview,” Nix said.

Auburn quarterback Bo Nix (10) warms up before the start of a game against Mississippi State on Nov. 13 at Jordan-Hare Stadium.

Auburn quarterback Bo Nix (10) looks on from the sidelines Saturday at Jordan-Hare Stadium.