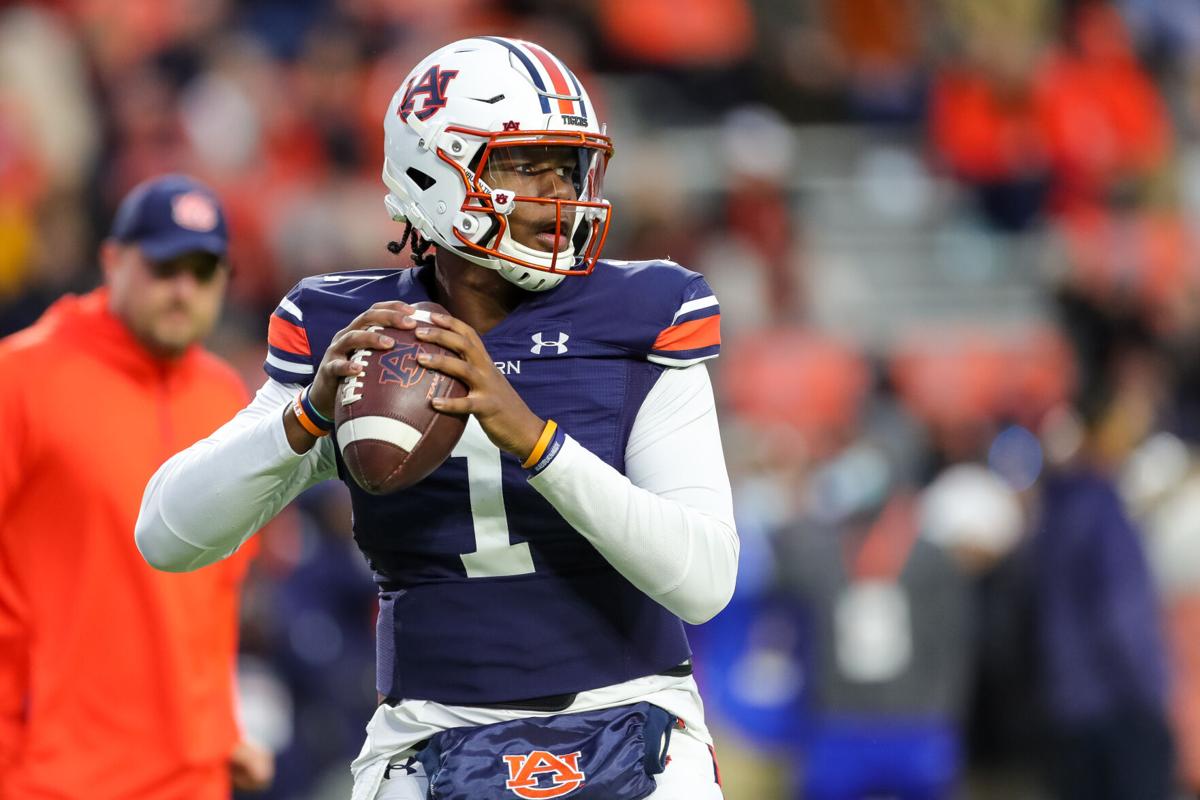 Auburn quarterback TJ Finley (1) celebrates with Aubie after they defeated Georgia State in a game Sept. 25 in Auburn. 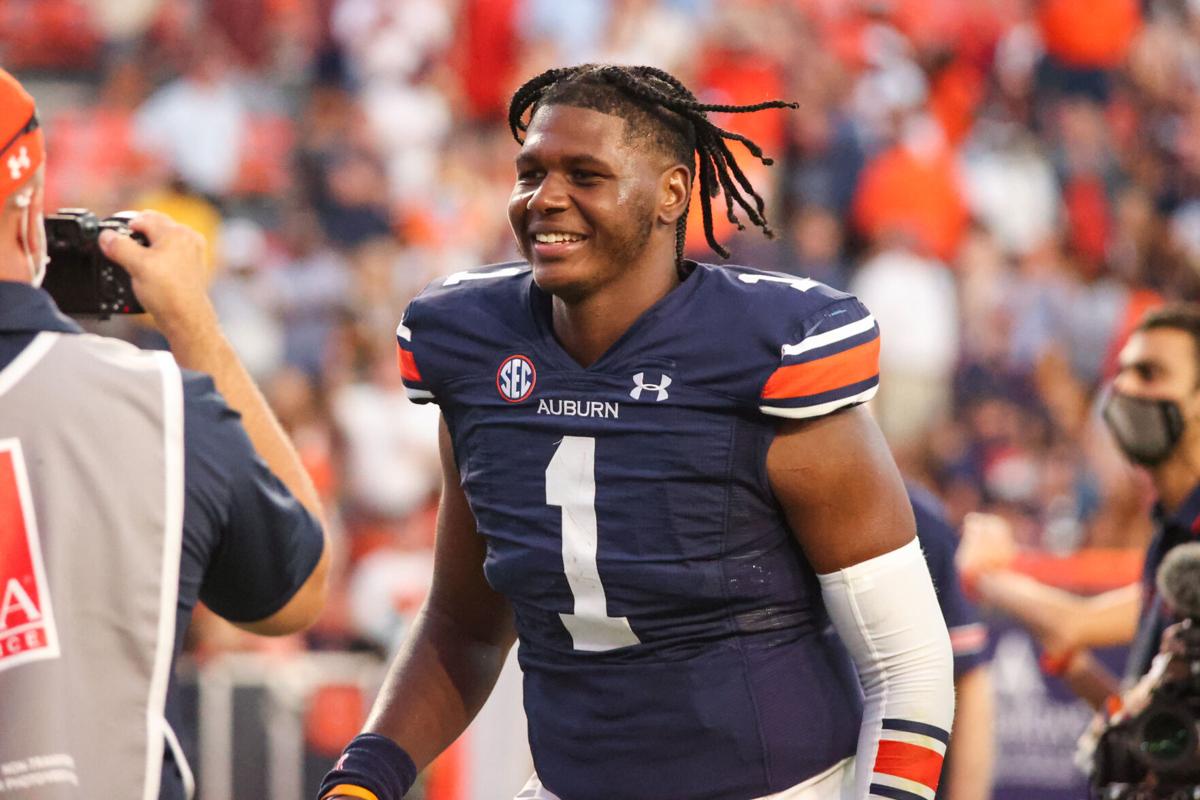 When Auburn quarterback TJ Finley stepped to the podium to talk to reporters via Zoom on Wednesday, the sophomore showed the poise and the understanding of a young player who had been there before.

Given what Finley will face Saturday night, it’s fair to say he has.

For the second straight year, Finley faces a situation in which he, a newcomer, is tasked with making his first start in place of an injured quarterback in a game against South Carolina. The first time around was 2020, when Finley was called upon at LSU to replace Myles Brennan; this time, the Baton Rouge transplant is stepping in for the injured Bo Nix.

While the circumstances last year and this year are significantly different, Finley is hoping for similar results as he pilots the Auburn offense through the rest of 2021.

“I’ve been preparing like a starter since Day 1, since I got here. Me and Bo have a lot of good conversations about what’s going on with the game plan and things of that nature,” Finley said. “With him going down, it’s an unfortunate situation, but I’ve been preparing week in and week out to be the starter so when the opportunity came I wouldn’t miss it.”

It was the fourth week of LSU’s 2020 season, and Orgeron and his staff were in a tough situation. Brennan suffered an abdominal injury the previous week against Missouri, which left LSU to choose between true freshmen Finley and Max Johnson to start the Tigers’ home game versus South Carolina.

With the race between Finley and Johnson neck and neck, the LSU coaches put some pressure on their two young quarterbacks: whoever won a third-down competition at practice would start against the Gamecocks.

Finley had already impressed Orgeron with his work ethic, but with a starting spot on the line, Finley thrived.

“He has a cannon for an arm, and he threw one of the best back-shoulder routes I’ve ever seen,” Orgeron said. “Whoever won that third-down competition would be a starting quarterback, and he was on fire that day.”

Finley was by no means perfect in his collegiate debut on Oct. 24, 2020, but his performance was more than enough to lift LSU to its second victory of the season. Finley completed 17 passes on 21 attempts for 265 yards with two touchdowns and one interception to help the Tigers top the Gamecocks 52-24.

“He was very calm before the game and during the game,” LSU running back John Emery Jr. told the Associated Press afterward. “For a freshman coming in and just balling like that, that was unbelievable.”

Finley’s production against South Carolina set him up to start the Tigers’ next four games before being supplanted by Johnson. While Finley’s time at LSU wound up being shorter than he expected, he felt his time there was still worthwhile.

“The experience I had last year was a focal point in my life. It allowed me to really grasp the things I was getting from LSU like the lessons I learned based on my performances,” Finley said. “The main thing I’m focusing on is just consistency. I don’t have to do anything special. All I have to do is go out there and do my job, simple as that, and everything will take care of itself.”

Finley’s arrival to Auburn this offseason led some to believe he was a direct challenger to Nix.

As Finley explained Wednesday, that wasn’t exactly the case.

While Finley joined the Tigers with the drive to prove he could start, he said the true objective was to become Nix’s replacement once Nix’s collegiate career was over. Finley recalled crossing paths with running back Tank Bigsby in Ft. Lauderdale, Fla., after Finley entered the transfer portal and Bigsby urging Finley to come and follow Nix.

Finley’s words echoed the sentiment of his father David Finley, who spoke about his son’s prospects just days after he led Auburn’s rally over Georgia State.

“We’re going to compete, but we weren’t saying, ‘OK, I know I’m going to take this spot’ or ‘I know I’m better than this guy.’ Nah, we compete and let the coach make the decision,” David Finley said. “We knew he was the future of the program, but sometimes the future comes when you don’t [expect it]. God has plans where you don’t know.

“Like [the Bible] says, ‘He’ll set your table up in front of your enemies.’ You just don’t know.”

Finley’s playing time has been limited since he came to the rescue against the Panthers on Sept. 25, but according to his coaches his preparation level never dipped.

Auburn offensive coordinator Mike Bobo explained Finley is in the office early every day discussing the Tigers’ installs well before it’s time to meet. Bobo said Finley asks for the play drawings early, which Bobo said is beneficial since Finley can study up and ask questions once the group comes together.

While Bobo lamented losing Nix, he credited Finley for how he’s taken on the challenge.

“I think one of his strengths is he’s got some poise. He’s got command when he takes the field,” Bobo said on the Tiger Talk radio show Wednesday. “He does a good job of leading the guys in not just getting them lined up [but] taking over. You’re like a coach on the field as a quarterback, and he has a presence about him and commands respect from the other guys, which is good to see.”

Finley recognized beating South Carolina again won’t be easy, especially given how the Gamecocks’ pass defense is playing. He explained South Carolina likes to play a lot of man coverage on the outside and pair that with pressure up the middle, the latter of which Finley struggled with as a starter at LSU.

To counter the Gamecocks’ strengths, Finley pointed to Auburn’s receivers getting their hands up and he and the offensive linemen communicating well. He emphasized it would take a team effort to get the passing game going before adding the Tigers can do it as long as they continue preparing and focusing on their 1-on-1 matchups.

While Finley was concentrating on Saturday’s game and what he’ll need to accomplish, he acknowledged how unique it will be to once again face South Carolina in his first start with a new team. Finley described it as a blessing before adding it felt like the moment was part of something much, much bigger than himself.

“I don’t believe in coincidences,” Finley said. “I think God has a plan for everything and God has a purpose for everything. I’m just going to go out there, do what I did last year, just play consistent, do my job and get the job done.”

Auburn quarterback TJ Finley (1) celebrates with Aubie after they defeated Georgia State in a game Sept. 25 in Auburn.