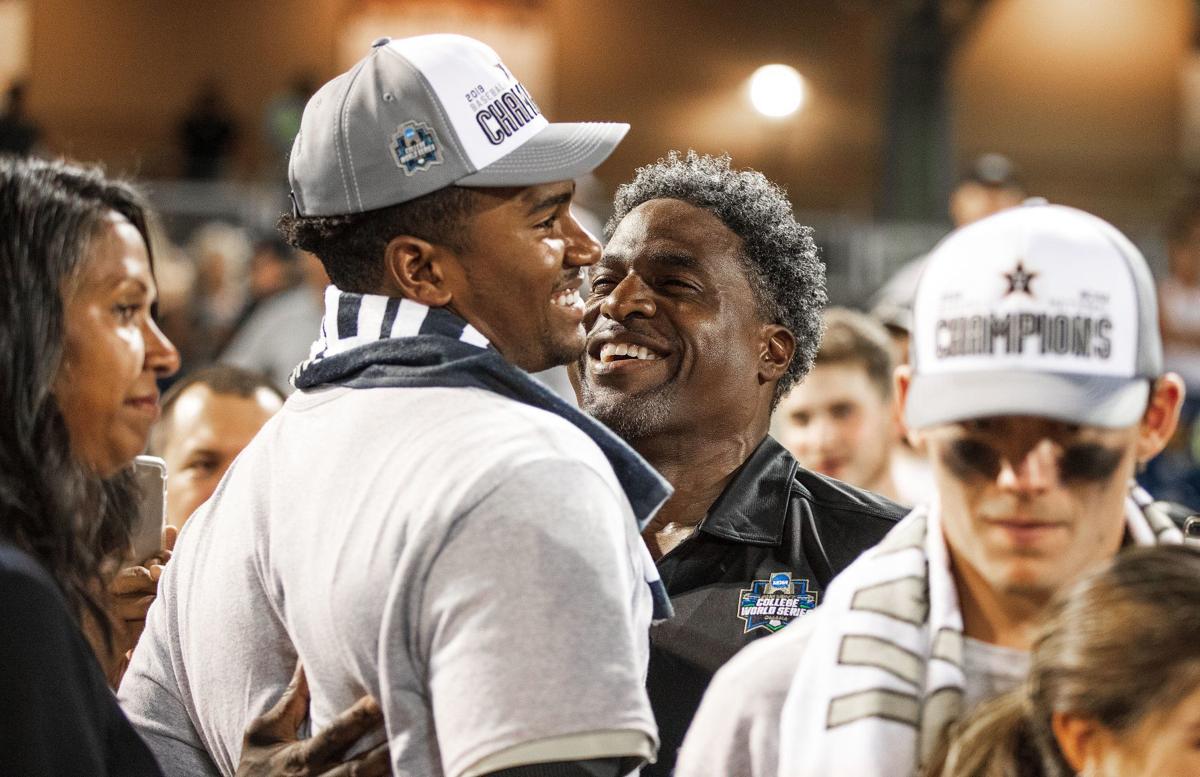 Tracy Rocker celebrates with his son Kumar after Vanderbilt’s win over Michigan at the College World Series in June 2019.

Former Auburn defensive lineman Tracy Rocker poses for a photo during his time as an assistant with the NFL's Tennessee Titans in 2011.

Rocker spoke to media Wednesday via Zoom about his decision to leave Auburn after 13 days to become the defensive line coach for the Philadelphia Eagles.

Rocker explained leaving Auburn – where he was a star defensive lineman in the late 1980s and already had one coaching stint in 2009-2010 – was difficult given his history with the Tigers but added that jobs like the one in Philadelphia are hard to come by.

“The decision is always tough because that’s somewhere I got my degree, had a great career there and [there’s] a lot of great people,” Rocker said. “This is one of the ultimate jobs out there at the highest level of football, so it was a very easy decision to make.”

Rocker was set to join Bryan Harsin’s staff before returning to the NFL, where he coached with the Tennessee Titans from 2011-13. The majority of the former Lombardi and Outland Trophy winner’s coaching career has been spent in college football — specifically in the SEC, where he’s had stops at Auburn, Arkansas, Ole Miss, Georgia, Tennessee and South Carolina.

While Rocker has mostly coached at the collegiate level, he said he has a sense of the biggest difference between coaching there and coaching in the pros.

“I think the shift is that in college you get kids at a lot younger age, and it’s a bit more developmental growth – not just on the field but off the field. Now when you [are] in the NFL, we assume that they know everything because we gave them money,” Rocker said. “I think it requires a little bit more of a conversation about – which we have in place in the NFL – of rookie development. That’s in place, but as a coach I feel like my job is to approach every day the same way and try to help them improve their game so that they can be successful.”

Rocker is part of a new Philadelphia coaching staff that is taking over a team that went 4-11-1 in 2020. The Eagles’ defense was 19th in yards allowed and 15th in passing yards allowed while registering the third-most sacks in the NFL last fall. The team was led in sacks by defensive end Brandon Graham, who ended the year with eight.

Even at 55 years old with 27 years of coaching in college and in the pros under his belt, Rocker is still all ears when it comes to learning the best way to go about his duties with the Eagles.

“As a coach, I’m not going to sit here and say that my way is always the right way, but I’m always willing to learn from others. In this game, it’s called coaches being coached,” Rocker said. I don’t know all the answers, and I’m not going to – if you walk in and think you do, we all have to go out and find out.

“I’m always calling other coaches to better myself, and it’s no different than a player calling around talking to another player like, ‘Hey, what did you do? How did you do this?’”

How could the rest of the Bucks Nets series shape out?

How could the rest of the Bucks Nets series shape out?

“I'm super excited for the chance to compete against the pros again ... I’m just very excited to leave it all one the table and just for a chance to make the Olympic team.”

“He's just a kid who's very team-oriented and a kid who I think is going to be real dominant in the SEC before it's all said and done.”

Auburn star signee Sunisa Lee won on uneven bars at the U.S. Championships meet on Sunday, making a strong statement on the road to the Olympi…

Former Arkansas guard Desi Sills is not coming to Auburn after all.

‘Sensei Mud’ has another chance in the league.

COMMENTARY: Which transfer portal pick-up will play the biggest role for Auburn football?

The Opelika-Auburn News' Jordan Hill and Justin Lee debate which transfer portal pick-up will prove to be the most productive for Auburn football in the 2021 season.

Tracy Rocker celebrates with his son Kumar after Vanderbilt’s win over Michigan at the College World Series in June 2019.

Former Auburn defensive lineman Tracy Rocker poses for a photo during his time as an assistant with the NFL's Tennessee Titans in 2011.