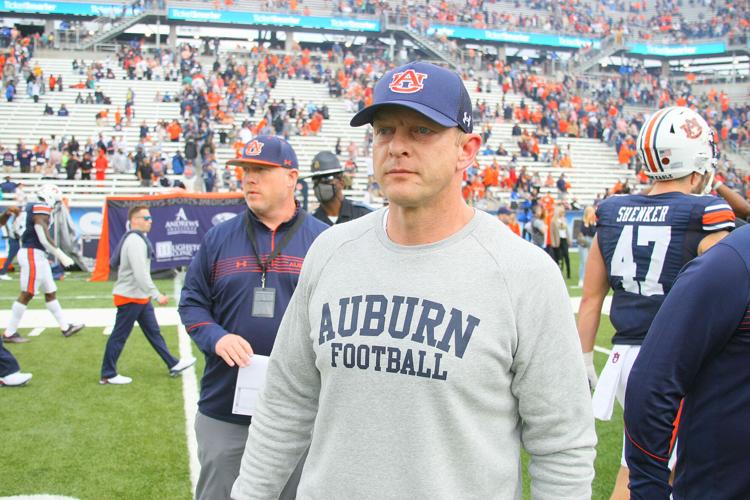 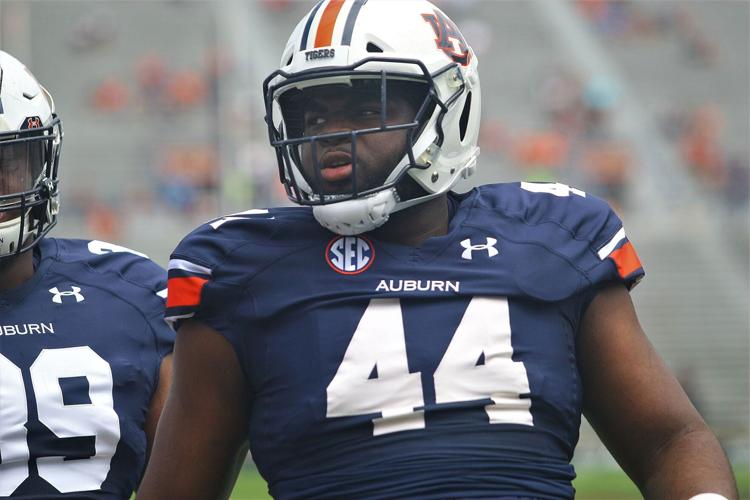 Auburn defensive tackle Lee Hunter (44) gets ready after a play during the Tigers’ A-Day spring game on April 17 at Jordan-Hare Stadium in Auburn.

As rumors regarding Bryan Harsin’s future with the Auburn program swirled Friday, a former player shared his perspective on his former head coach.

Former Auburn defensive tackle Lee Hunter posted a message on Instagram regarding his experience with the Tigers in 2021. Hunter expressed how hard leaving Auburn was but ultimately pointed to Harsin’s leadership as a key reason for his departure.

“The reason I chose to leave Auburn [was] because we got treated like we wasn’t good enough and like dogs,” Hunter wrote in part in the post. “I love you Auburn nation ... Harsin has the true mindset for a winner but has a terrible mindset as a person.”

As of 9:50 a.m. Friday, Hunter’s post 534 likes, including likes from former Auburn defensive linemen Marquis Robinson and Ian Mathews and former wide receiver Ja’Varrius Johnson, all of whom have entered the transfer portal this offseason.

Former Auburn safety Smoke Monday agreed with Hunter’s assessment and wrote in part, “Love Auburn to death but this is real and true ... Harsin is a hell of a coach that wants to win but as a person he truly don’t understand kids that come from nothing.”

While Monday and Hunter voiced their issues with Harsin, two of his players rose to his defense.

Former Auburn linebacker Chandler Wooten defended Harsin on Twitter, writing, “We didn’t need a best friend we needed a coach ... that’s what we had.”

EDGE rusher Derick Hall, who turned down a chance to declare for the NFL draft in order to return to Auburn in 2022, wrote, “Auburn Family, Don’t Believe The Things You See. [Coach Harsin] Works Harder Than No Other Man To Put This Program In The Best Position To Be Successful Point Blank Period.”

The 6-foot-5, 300-pound Hunter committed to Auburn in December 2019 then signed with the team the following December despite the firing of head coach Gus Malzahn. He was the top-rated signee for the Tigers at that time according to 247Sports until EDGE rusher Dylan Brooks’ late addition to the class.

Hunter was an early enrollee in the spring of 2021 and had an impressive performance in the Tigers’ A-Day spring game, which included recording a tackle for loss on running back Tank Bigsby to force a turnover on downs.

Hunter did not see the field as a true freshman.

The second-year Auburn assistant first posted, “Values: important to have them, more important to live them #truth #WDE” then wrote a separate post seven minutes later that said, “(Harsin) and this staff are building men of character. Block the noise and work, hard work #WarEagle”

Cassie Stevens won all-around in a career performance, and the No. 5 Auburn gymnastics team topped NC State in front of another sold-out crowd on Friday in Neville Arena.

Now a Mountaineer, the former SEC guard got his revenge Saturday, logging a career-high 31 points to down No. 15 Auburn 80-77.

‘The finer details’: No. 5 Auburn gymnastics combs for tenths ahead of second home meet

As the Auburn gymnastics team turns its attention to refining skills and polishing routines, head coach Jeff Graba said he’s gotten in the habit of belting out ‘no.’

Auburn’s Derrian Gobourne up to No. 2 nationally in floor scoring average

After a sensational routine last Friday night that got a perfect 10 from one of two judges, Gobourne has moved up to No. 2 nationally in scoring average on the floor.

Home winning streak snapped as No. 15 Auburn taken down by Texas A&M

It couldn’t have worked out better for Texas A&M.

As Auburn bids farewell to Big 12/SEC Challenge, a look at how it’s fared

The Tigers are 3-4 all-time in the face-off of major conferences, while their opponent Saturday has struggled to win against the Southeastern Conference.

Butch Thompson’s latest Auburn squad his ‘most physically strong’ yet. What does it mean for power-hitting potential?

This is the "physically strongest" Auburn team Butch Thompson said he has ever had, and he sees a potential for power at the plate. But who could it come from? And what are the concerns?

'Got to take it personally': Defending opposing guards a must-fix for Auburn

In each of No. 15 Auburn's losses this year, an opposing guard has logged the game-high in points.

LEE: Buzzsaws, Buzzes, and when your number gets got

"The only thing Auburn basketball can do is keep from overreacting or overcompensating."

What Messi says he regrets during the World Cup

What Messi says he regrets during the World Cup

Mahomes and Hurts to make history at Super Bowl LVII

Mahomes and Hurts to make history at Super Bowl LVII

Auburn defensive tackle Lee Hunter (44) gets ready after a play during the Tigers’ A-Day spring game on April 17 at Jordan-Hare Stadium in Auburn.