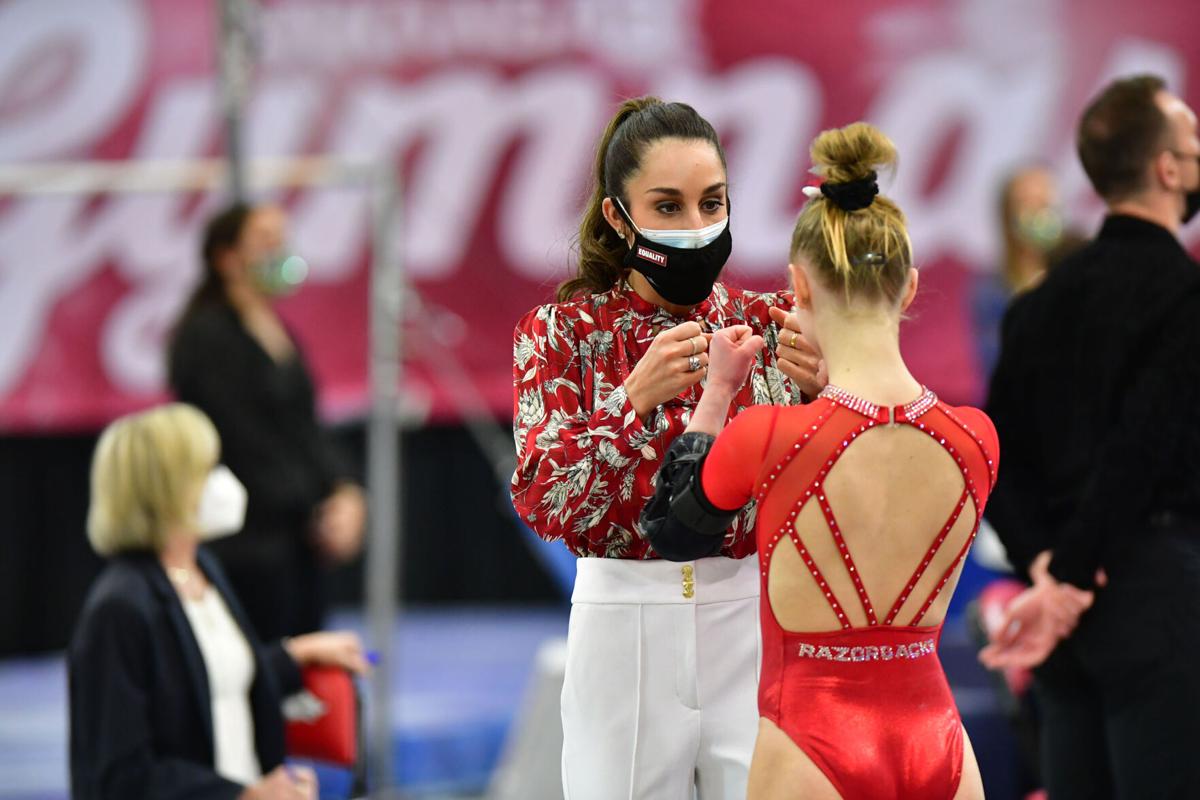 Arkansas head coach Jordyn Wieber greets an athlete during the team’s meet against Missouri on Jan. 22, 2021, in Fayetteville, Ark.

In her time as head coach at Arkansas, Jordyn Wieber has seen SEC gymnastics grow and grow — gold by gold.

Suddenly she’s not the only Olympic champion in the gym anymore.

Wieber will meet a fellow gold medalist Friday when her Razorbacks team hosts Auburn and the Tigers’ superstar freshman Suni Lee. Wieber won team gold with Team USA in London at the 2012 Olympics and Lee won gold in the individual all-around last summer in Tokyo.

Fellow gold medalist Kyla Ross, who was teammates with Wieber on the 2012 Team USA squad, has also joined Wieber’s staff at Arkansas as a volunteer assistant for 2022.

Last year at the Auburn-Arkansas meet, Wieber was the only Olympic gold medalist in the building. This year, the number has tripled — a sign of how the competition level continues to rise in the SEC with more and more big names becoming part of the conference.

“We’re going to have some great talent in the building,” Wieber shrugged, as her team got set to host Auburn.

Arkansas hosts Auburn at 7:30 p.m. Friday on the SEC Network’s Friday Night Heights block, where Wieber and Ross will be coaching for Arkansas and Lee will be competing for Auburn.

“Obviously the SEC is one of the strongest if not the strongest conference for gymnastics,” Wieber said between practices this week in Fayetteville. “I really think that as a conference we kind of lead the way, in a lot of different spaces in our sport — being on SEC Network, and just the fanbases and the support we have from the athletic departments across the board is just tremendous.

“Having somebody like Suni at an SEC school is just great.”

Wieber embraces the competition — and no one would expect anything different from a member of the ‘Fierce Five.’ Wieber rose to stardom in the sport on the Olympic stage before being named head coach at Arkansas in April 2019. After a finish outside the top 25 in 2020, Wieber helped vault Arkansas up to No. 6 in the final team rankings in 2021.

“We’re just really excited to welcome Auburn,” Wieber said. “It’s always a great meet with them. Our first season here, they beat us, and last year we beat them at Auburn and beat our Arkansas team score record.

“It’s always a great competition. It pushes us to step up our game and be better.”

Wieber is a young star in coaching at just 26 years old, but she has more experience coaching than her age lets on: After her whirlwind run to gold as a teenager, she went to college at UCLA and started to learn coaching as a team manager as a freshman at 18.

A star in the sport and featured on the Corn Flakes box, Wieber lost her NCAA eligibility when she accepted endorsements after the Olympics, and so she had to coach at UCLA instead of compete.

“I’ve been talking a lot about NIL and I look at somebody like Suni and I’m a little bit jealous I didn’t get to have the best of both worlds like she did,” Wieber laughed. “But it’s only good for the conference. It’s great and I’m excited that we’re going to be able to have Auburn here and hopefully have a great competition.”

It’s better late than never, Wieber seemed to say, and while she didn’t get to experience life as a student-athlete the way Lee gets to, Wieber’s leaving her own handprint on college gymnastics now as a coach.

SEC gymnastics grows by the year, and with more and more superstar names like Lee, Wieber and Ross becoming a part of the conference, it doesn’t look the upward trend will be slowing down anytime soon.

“That’s one of the things that attracted me to the SEC, was the fact that every single week, every team is pushed by a great team on the other side, and there’s no down weeks,” Wieber said. “There’s no team that’s easy to beat in the SEC, across the board. That, to me, is really exciting, and that, to me, only makes each of our teams better and pushes us to be better as a conference.

“Being able to have an event like the SEC Championship on a podium, and just fighting for that title, it’s really exciting. I love being a part of it. I only see the SEC continuing to grow in the sport of gymnastics from here on out.”

Opinion: Sean Payton's last season with the Saints was a success

“She was one of the top recruits in the country outside of Suni.” Sophia Groth is already showing why.

Arkansas head coach Jordyn Wieber greets an athlete during the team’s meet against Missouri on Jan. 22, 2021, in Fayetteville, Ark.