In Cam’s shadow, Caylin Newton building his own reputation at Auburn
0 comments
Share this
Return to homepage × 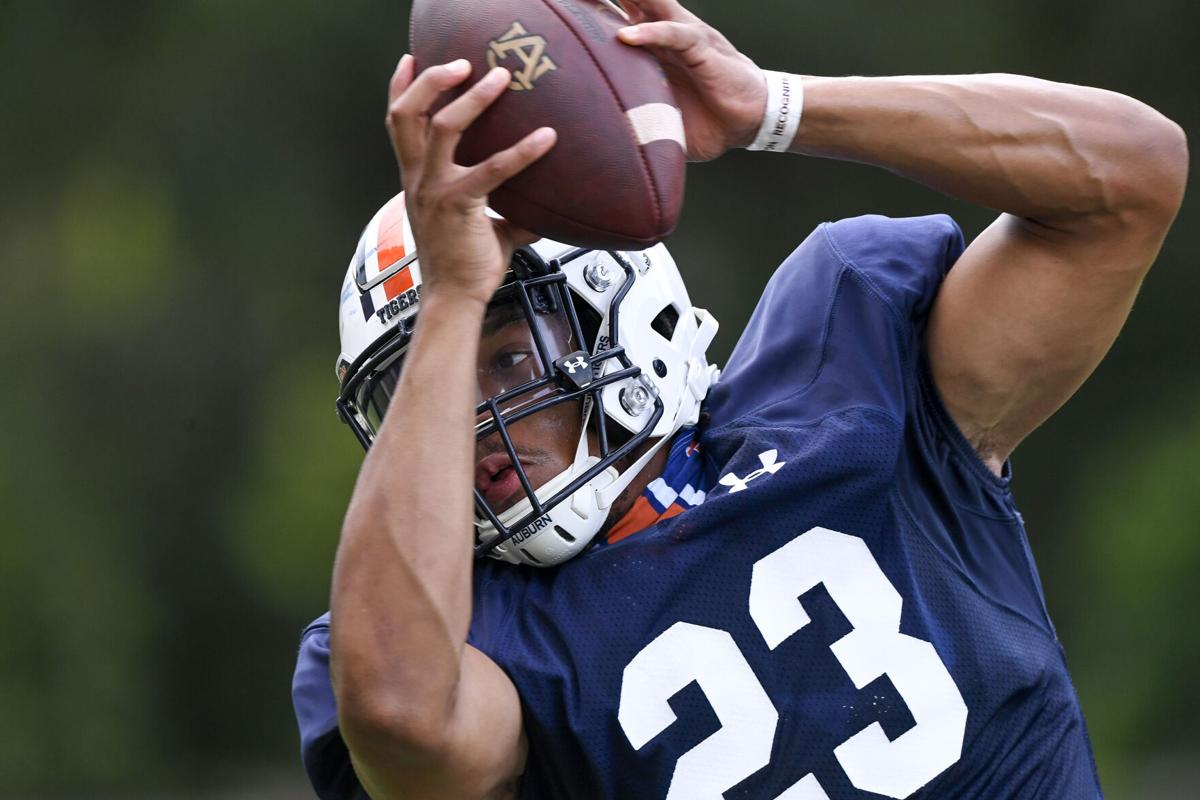 Caylin Newton catches a pass during practice Sept. 1 in Auburn. Newton has earned praise from his head coach and his teammates alike after transferring to Auburn, now working to make his own name in the shadow of his legendary brother Cam. 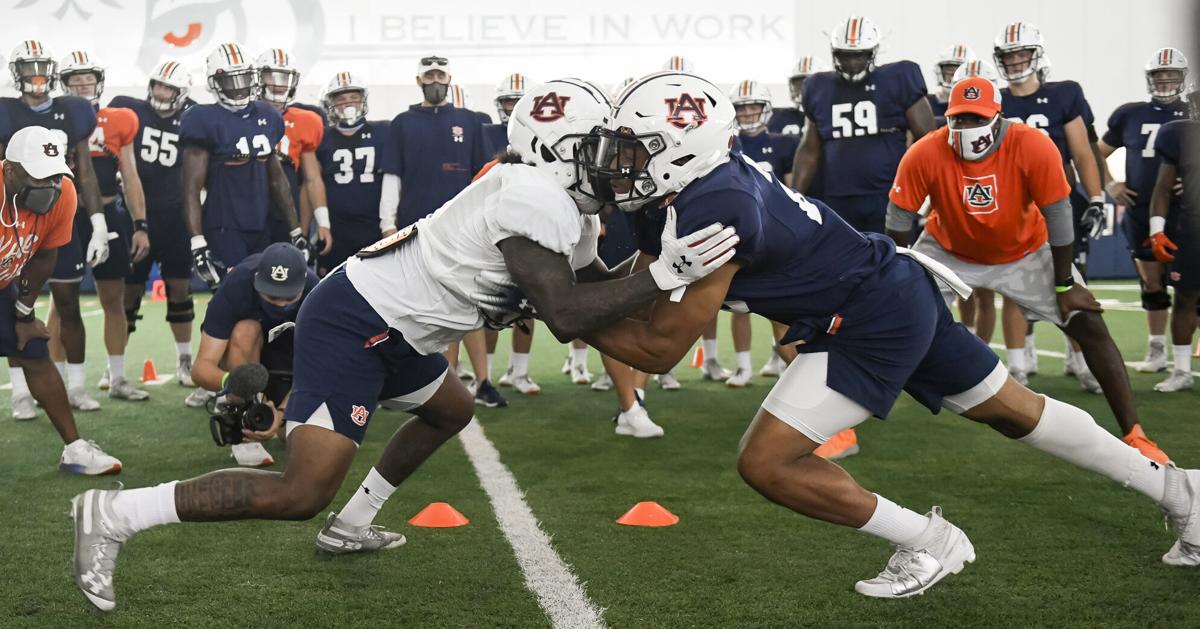 Caylin Newton, right, goes one-on-one with Christian Tutt, left, during Auburn practice Aug. 19 in Auburn. Newton has been lauded for his physicality in drills like this one at Auburn.

Now he’s got a reputation — earned all on his own.

The words ‘physical,’ ‘tough’ and ‘hard worker’ have floated around his name this fall as Auburn has pushed through practices in the bubble. The former quarterback at Howard has apparently attacked his role as a receiver with an attitude, and he’s apparently plenty quick to lay into a hit.

It’s almost like he’s a little brother with plenty to prove.

Caylin Newton stepped onto brother Cam’s old stomping grounds this summer when Caylin signed up with Auburn as a graduate transfer walk-on, after a successful stint striking out on his own at Howard. Caylin led Howard at quarterback and made a name for himself there, winning MEAC Rookie of the Year and making history as part of an epic upset victory over UNLV.

But, of course, Cam casts a monumental shadow across the Plains. His statue stands outside the stadium, and at Auburn, Caylin is back to trying to make his own name again in the place where his brother’s legacy will hang over everything he does.

Still, at least within the confines of Auburn’s practices closed off from the outside world, Caylin is doing just that. He’s quickly building his own reputation.

“I’ve just been so impressed with his attitude, his physicality, and really probably more than anything his want-to,” Auburn head coach Gus Malzahn said of Caylin last week. “He’s desperate to help the team, so that’s been really good from him.”

That word, ‘physical,’ tracks with the rest of the wide receivers who have welcomed Caylin in. So does another word, ‘natural’ — as Caylin has made a quick switch to receiver even after playing quarterback at a high level in college football.

“I wouldn’t have believed he played quarterback at Howard because he’s so physical,” Auburn’s star receiver, Seth Williams, said Wednesday. “He changed his game to receiver and made a smooth transition.

“I feel like he’s going to be a good contributor for us because he’s got sure hands.”

That’s high praise coming from Williams, an SEC superstar who leads that group along with speedster Anthony Schwartz, representing another standout among a touted group of talented receivers from their signing class from two years ago and a new class coming in this season.

Somewhere in the mix, though, with Chad Morris calling the shots for a new-look Auburn offense, Malzahn figures there’s room for Caylin to contribute this season in a year unlike any other.

“There’s no doubt that he’ll be able to help us out,” Malzahn said. “It doesn’t surprise me at all. But he’s stepped right in. He studies the game. And he’s been very physical too. You’re talking about a guy that actually played quarterback in college and was very successful. So, he’s got a really good understanding of offenses, defenses, big picture.”

Malzahn coached Cam as Auburn’s offensive coordinator during their ride together to the national championship in 2010. Cam and Malzahn have stayed close ever since. Caylin led Howard at quarterback in 2017 and 2018, and after a coaching change there, he quarterbacked Howard through each of the first four games of the 2019 season before choosing to redshirt and transfer. He graduated from Howard in the spring.

Teaming up with Malzahn seemed like a perfect fit for Caylin, but the reports from inside practice show that the younger brother has arrived bent on doing much more than just carrying on the family name at Auburn.

“Caylin, that’s a hard worker right there,” Schwartz said last week. “He does everything the coach tells us to do. That’s a tough man. I saw him a few practices ago — he just ran through one of the DB’s. He wants to get open. He wants the ball. He looks very natural as a receiver. I thought he was a receiver beforehand, you would think, just based on how he’s been practicing so far.”

Auburn opens its 10-game season Sept. 26 against Kentucky. Cam is set to make his first start for the New England Patriots on Sunday against the Miami Dolphins.

Change hit the Newton family this offseason just as the virus put the sports world on pause.

But seemingly like always, Cam and Caylin are playing with plenty left to prove.

That’s one thing that Caylin has in common with his brother, even as he strikes out on his own.

“Caylin is extremely hard working,” Auburn quarterback Bo Nix said back in August. “Obviously he came over here looking for a great opportunity. And I think he found one.

“Knowing Caylin, he’s going to do whatever he can to help the team. He’s a great team player, great work ethic, great leader. So I’m really looking forward to seeing him on our team.”

Auburn announced new plans for gameday operations for the 2020 football season, including the stadium policy on masks and social distancing.

There will be no pregame eagle flights at Auburn football games this fall, but the eagles continue to practice and the Raptor Center is inviting fans to see them at new socially distanced Saturday shows.
Auburn University Sports News

The Auburn men’s basketball team is part of plans to play a drastically altered Orlando Invitational in a bubble like the NBA’s this season, per a report Tuesday.

Cam is back: Newton rushes for two touchdowns as Patriots win

Cam Newton is back.

Auburn is walking into Jordan-Hare Stadium to take one last look around today — before gameday changes completely.

Chad Morris figures Auburn will need four capable running backs to get through the grind of the 2020 season.

D.J. Williams puts freshman butterflies behind him, ready to charge into Year 2

Auburn running back D.J. Williams looks to take a charge forward in his second season with the team.

Auburn soccer is scheduled to host the SEC’s first game in the era of pandemic play on Friday.

Caylin Newton catches a pass during practice Sept. 1 in Auburn. Newton has earned praise from his head coach and his teammates alike after transferring to Auburn, now working to make his own name in the shadow of his legendary brother Cam.

Caylin Newton, right, goes one-on-one with Christian Tutt, left, during Auburn practice Aug. 19 in Auburn. Newton has been lauded for his physicality in drills like this one at Auburn.