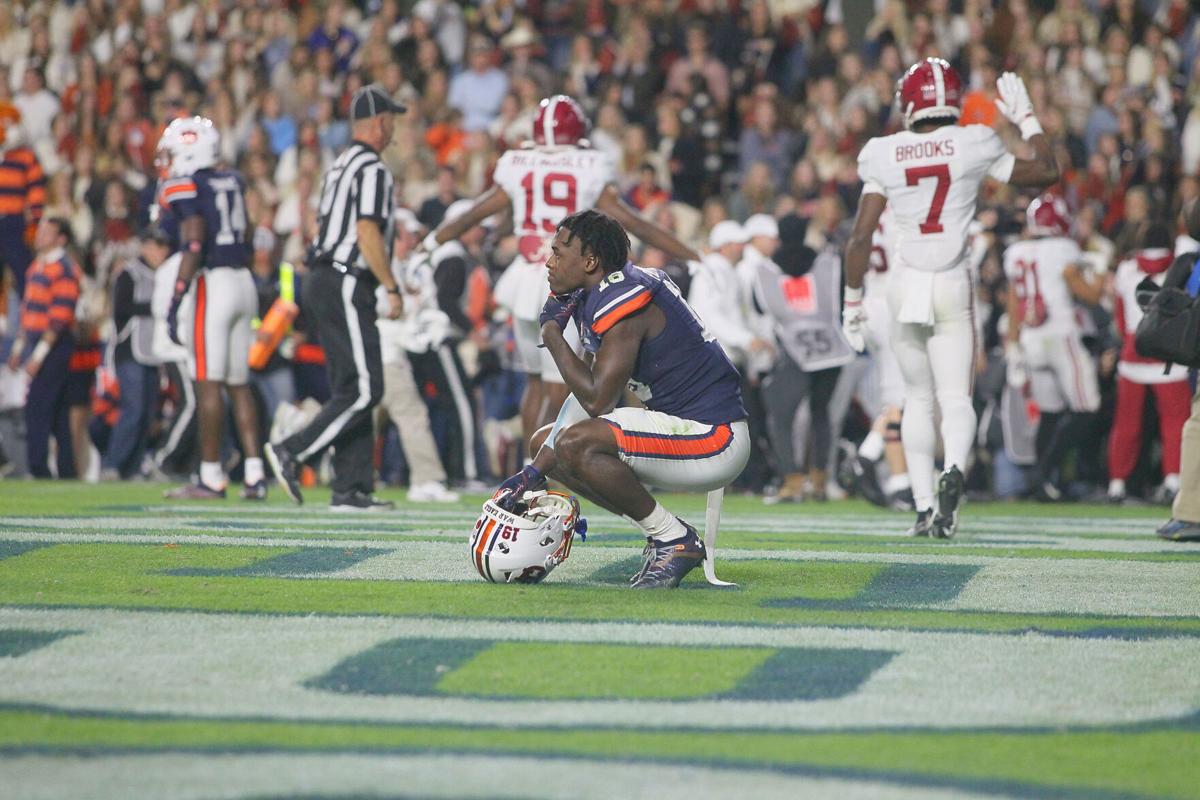 Auburn safety Bydarrius Knighten (19) reacts after the Tigers’ loss to Alabama on Saturday in Jordan-Hare Stadium. 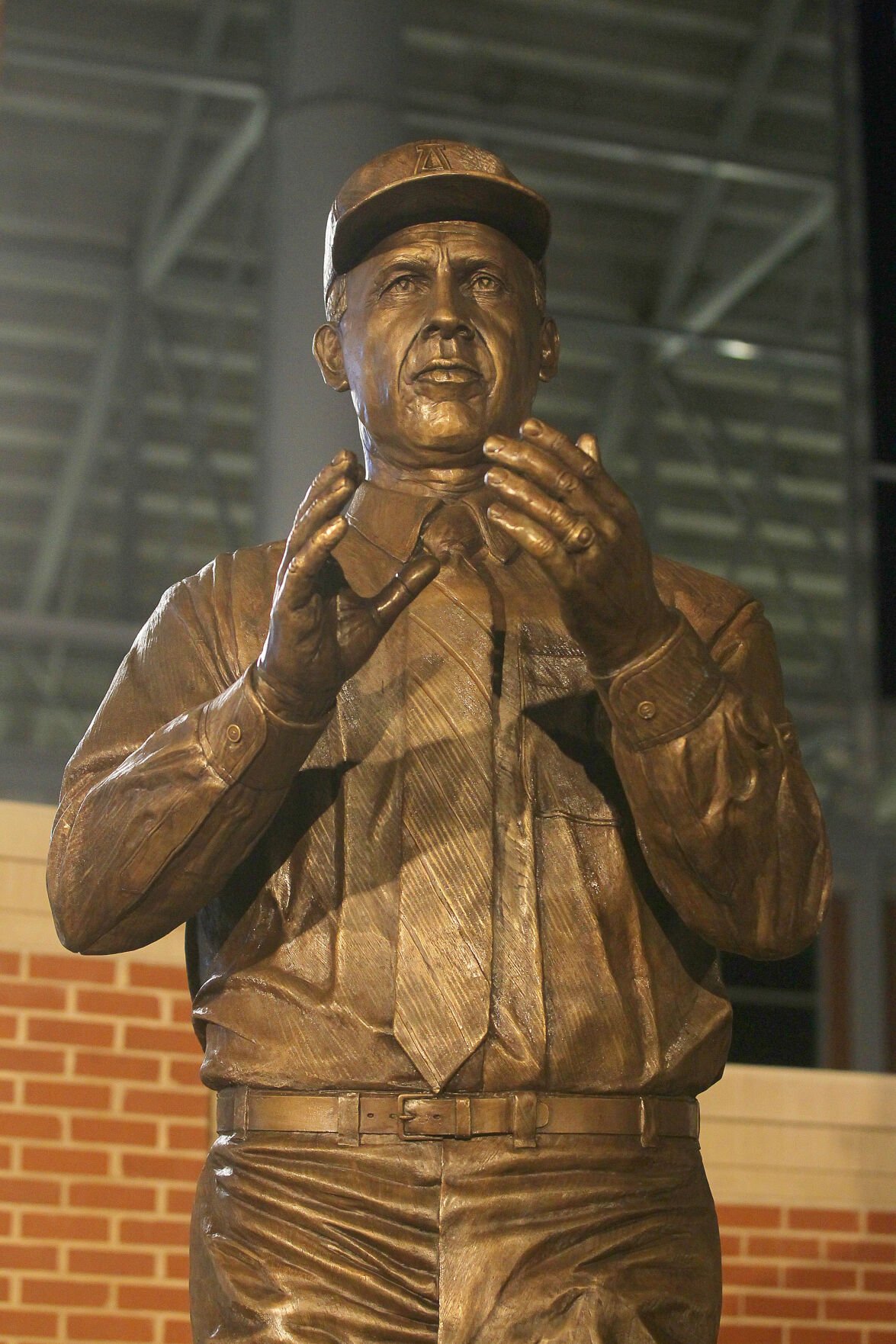 The Pat Dye statue stands outside Jordan-Hare Stadium after Auburn’s loss to Alabama on Saturday in Auburn.

Kool-Aid McKinstry made the play in the corner, John Metchie got the last laugh at the pylon, and for Auburn there’s nothing left to do but hurt.

I’m not telling you anything you don’t know.

Heartbreak. Sick in your gut. TJ Finley fought through pain and he deserved his moment. Bo Nix and Anders Carlson deserved to toast together on the sideline. A generation of Auburn students had their time together taken away by COVID-19, and they deserved the chance to storm the field during their own epic Iron Bowl win.

You knew all that. You knew it as you took the silent walk out of Jordan-Hare Stadium, or wherever you were on Saturday night when breathless turned to speechless.

Auburn blew a double-digit lead again. You knew that.

Pat Dye fought like hell to bring the Iron Bowl to Auburn and the Tigers should be 11-5 in the rivalry in Auburn instead of 10-6.

There are no moral victories in the Iron Bowl. You know that.

Dye’s statue stands outside the stadium and it stood out there on a cool and quiet Saturday night as Auburn men and women emptied out onto Donahue with hurt in their hearts.

I’m sure he hurt too.

In the 80’s, when Dye took on that fight, he had to be sick and tired of the uphill climb. It had to turn his gut every time he walked into Legion Field to play a “home game” in Alabama’s home stadium.

Today, after that game, there’s nothing left to do but hurt. You can lash out, if you like. That’s part of it. You can be angry and you can be frustrated and you can shout cries across the Plains, and nobody can blame you, because you lost the Iron Bowl in four overtimes and it doesn’t get worse.

But above all, you hurt, and from pain there comes change.

I told you what you know. Let me tell you what I know:

Auburn does not fear Alabama, and Auburn never will.

Tiger Woods used to wear red, too, kind of like that crimson. During an intimidating stretch of dominance unseen in his sport, he’d go for blood every Sunday and opponents would watch their shots shank into the rough as they faltered in his shadow.

Georgia’s still trying to finally win the big one over Alabama next week in the SEC Championship Game, because the Bulldogs have bent in all their chances so far during the recent run. Doesn’t it feel like Texas A&M spots the Crimson Tide two touchdowns early every time they play? Under Nick Saban, Alabama has built a powerhouse that sometimes wins games as soon as it steps on the field.

Not in Auburn. Auburn stares Alabama down every time and never blinks, because Dye taught Auburn how. The series is 20-20 since Bo went over the top. Auburn entered Saturday’s game 6-5 and the only reason it had any business hanging with 10-1 Alabama is because Auburn is Auburn, and because Auburn not only never blinks, but it stares through the crimson mask into the man who’s no better.

And if Auburn isn’t intimidated now, in this era, as the Tide keeps rolling on unreal heights, we know Auburn will never be intimidated.

You already know how it felt, but I can only tell you what’s next:

This is the place where magic falls over the Iron Bowl every time it’s here. Hurt is the only reason it comes.

Opinion: Sean Payton's last season with the Saints was a success

“She was one of the top recruits in the country outside of Suni.” Sophia Groth is already showing why.

Auburn safety Bydarrius Knighten (19) reacts after the Tigers’ loss to Alabama on Saturday in Jordan-Hare Stadium.

The Pat Dye statue stands outside Jordan-Hare Stadium after Auburn’s loss to Alabama on Saturday in Auburn.