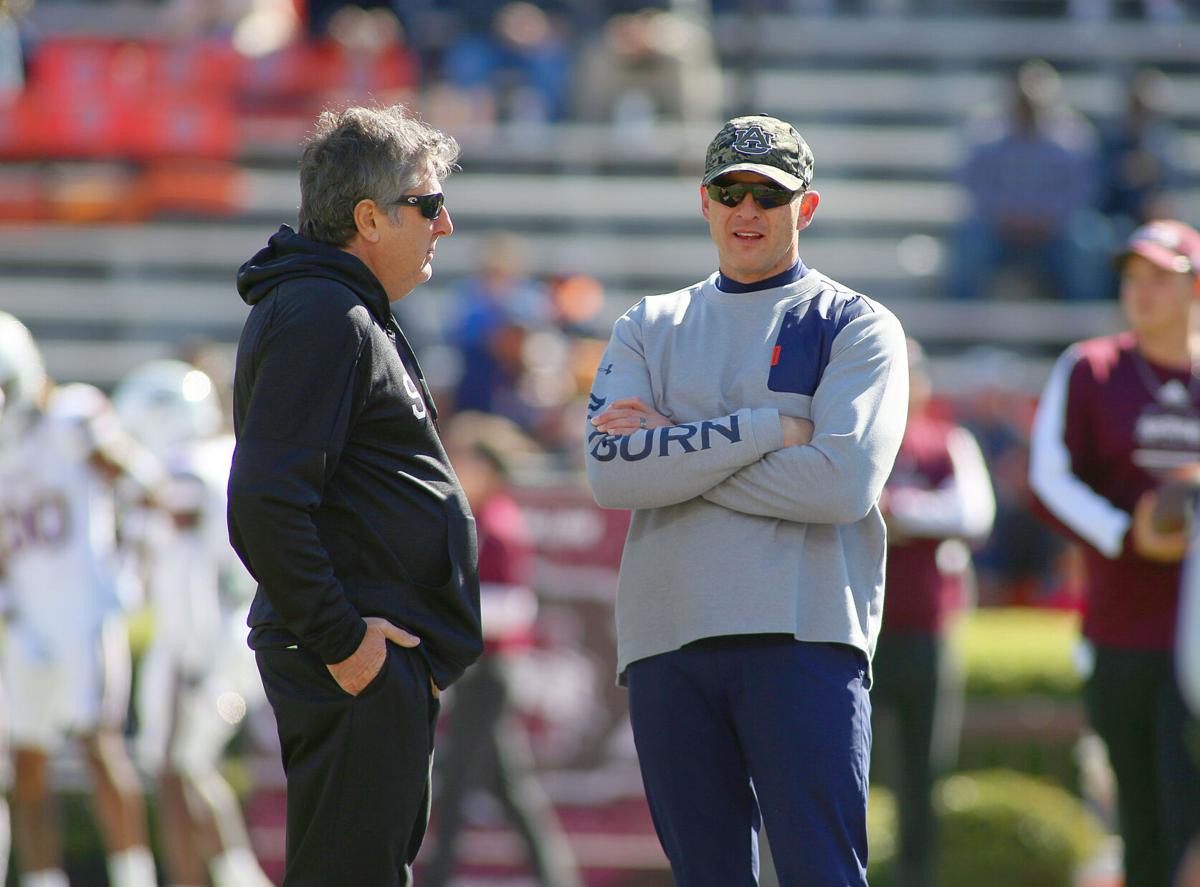 Auburn head coach Bryan Harsin waits for an video replay review during the second half of a game against Mississippi State on Saturday in Auburn.

Everyone here in Auburn already knew. If you couldn’t see it, it’s just because you were kidding yourself. Everybody who was here in the stadium for the Georgia State game earlier this season saw that things aren’t going right, that this team isn’t playing up to its talent, and that Bryan Harsin is having a hard time in Auburn.

Did blowing a 20-point lead in Baton Rouge chap your behind a few years ago? What are you going to have to say about blowing a 25-point lead at home?

After utter collapse and abject failure, Harsin is now looking for answers at the end of his first season — and if he’s wise, he’ll know stadium stairs and toughness talk aren’t going to go far for him anymore.

Auburn had no business losing to Mississippi State, yet a butt-kicking turned into a butt-kicking right before our eyes in a way I’d never seen before. Auburn entered Saturday having won 10 of its last 11 against the SEC’s Mississippi schools. With the landscape the way it is — in recruiting, in facilities, in money — Auburn shouldn’t lose these games at home.

And yet: You knew.

Can Harsin find those answers? Yes. Of course he can. It’s only his first year. But he needs to go looking for them and my gut tells me he’s running out of free passes from the fans. So do my ears. Boos rang out over Jordan-Hare when the clock ran down to zero.

Harsh. Yes. But this is a harsh league.

He’s not going to have the advantages Terry Bowden and Gus Malzahn had. They swept Auburn up on magical rides in each of their first seasons, and when questions came they at least had proven something. Harsin, suddenly, has seen his team lose in back-to-back abysmal performances and is in danger of ending the season 6-6 on a four-game losing streak.

That’s even after TJ Finley’s miracle save against Georgia State. If that was your wake-up call, what was that this Saturday?

Seriously: What was that?

It’s time for Harsin to go looking for answers. Is he on the hot seat? No. The honeymoon ending doesn’t mean you’re getting a divorce. But it means you’re in the real world now.

Get real. We won’t be listening. We’ll be watching.

Auburn head coach Bryan Harsin waits for an video replay review during the second half of a game against Mississippi State on Saturday in Auburn.