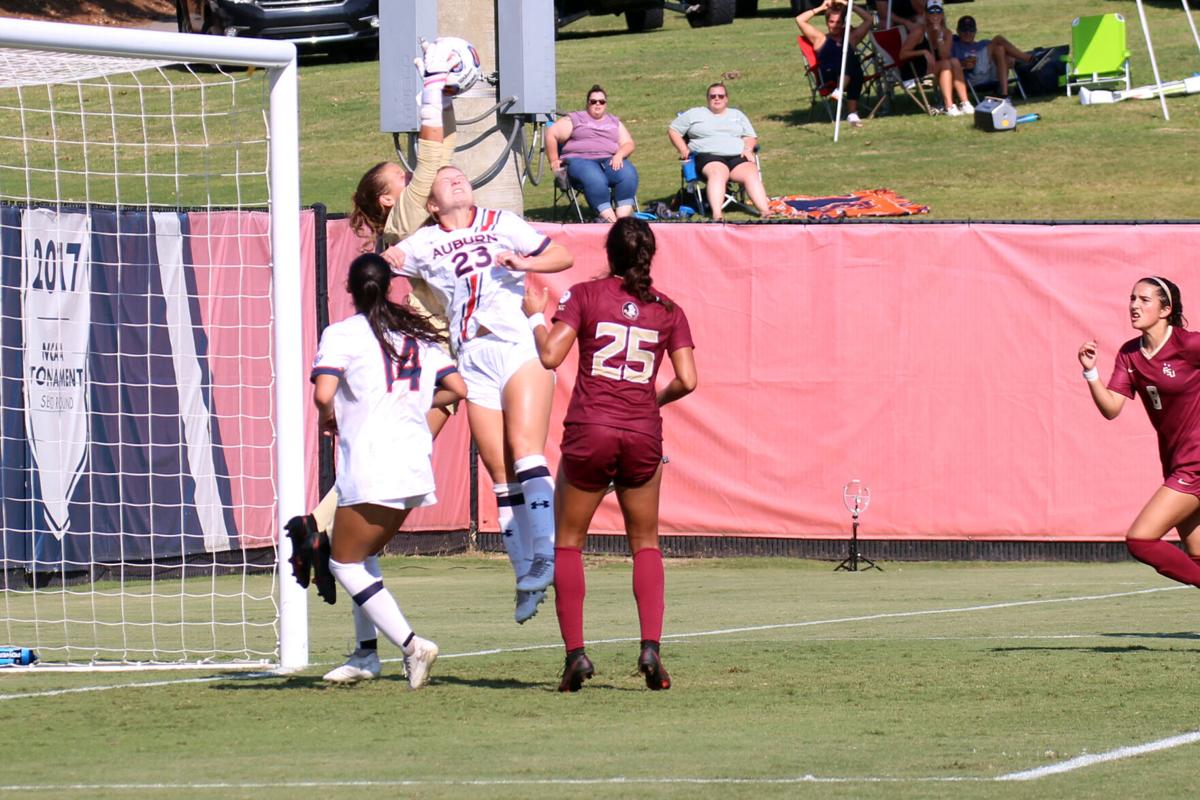 Florida State goalkeeper Cristina Roque goes up to pull in the ball and end an Auburn challenge by Olivia Candelino (23) on Sunday at the Auburn Soccer Complex. 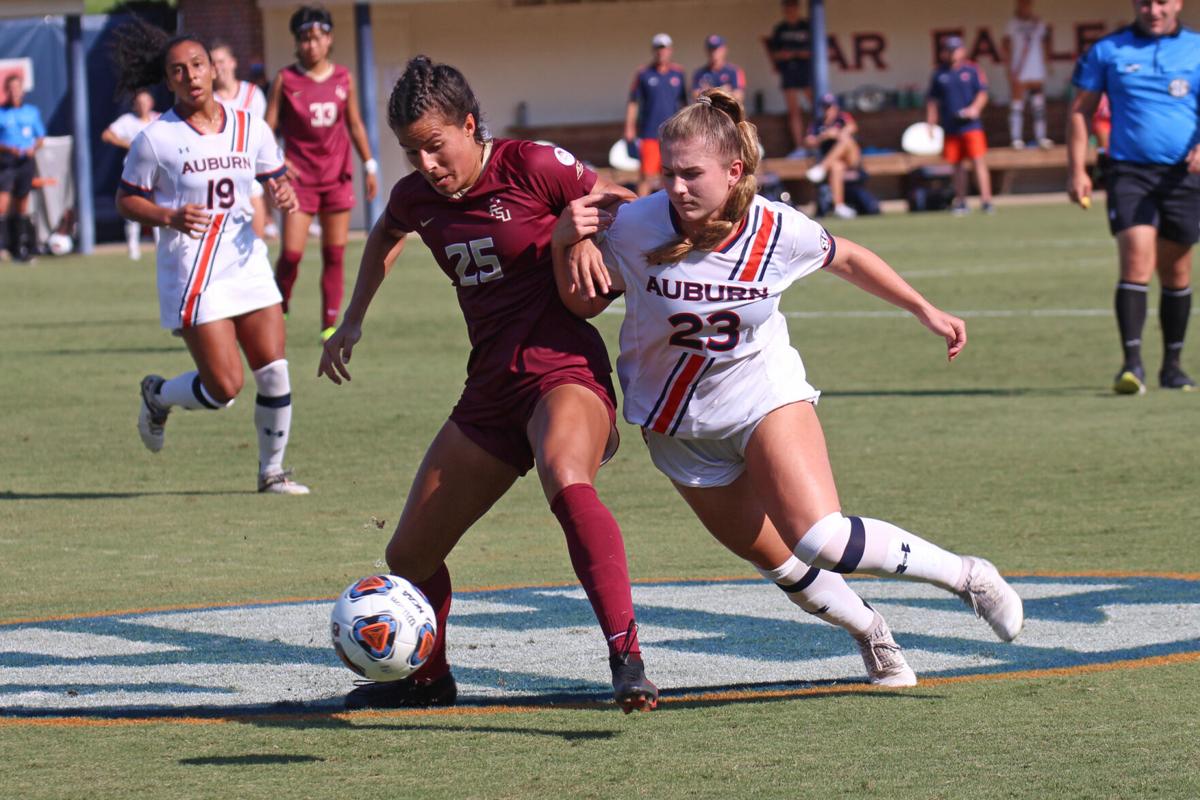 After Anna Haddock’s goal cut the deficit to one with 35 minutes left, the Tigers played like they had something to prove.

No. 10 Auburn pressured No. 1 Florida State all down the stretch, creating chances and pushing back.

Auburn got two shots on goal in the final 25 minutes. The Tigers forced two corners in that span. One ball lofted in the box was tracked won by Olivia Candelino for a header — but was yanked down by the Florida State keeper just above her reach in the precarious final minutes.

Florida State survived 2-1 on Sunday at the Auburn Soccer Complex.

But playing with plenty to prove, the Tigers feel like they did just that.

“We played with the No. 1 team in the country and I think we showed we deserve to be a top-10 team today,” Auburn head coach Karen Hoppa said.

Auburn was obviously disappointed with the result. The stands were packed Sunday with rowdy Auburn fans excited about the team’s undefeated start to the season — and the opportunity at hand.

It was in the second half when Haddock fired her rocket into the back of the net from about 25 yards out that the fans in the stands started to believe again.

The game ended instead with Hoppa, in her 23rd season as head coach at Auburn, saluting those fans to thank them for coming and packing the house — and getting her team ready for SEC play starting Friday.

“We had chances to beat the No. 1 team in the country,” Hoppa said. “I thought we got better from first half to second half. The fun this is, we had them on their heels. We had them a little bit rattled, and we had them under pressure, and we created some chances.

“Now it’s our job to learn from this and take this into SEC play,” she also added. “There’s no better preparation for SEC next week than this game today. Then we’ve got to earn a second shot at them in playoffs.”

Auburn fell to 6-1-0 on the season. Florida State moved to 7-0-0. Both teams entered Sunday’s showdown ranked in the top 10 in the United Soccer Coaches rankings.

A top-10 showdown is never without some surprises. Olsson’s stunner in the opening moments proved to make the difference for the Seminoles on the scoreboard.

“Obviously we didn’t come out exactly how we wanted to start in the first two minutes, but I think we’re definitely a very responsive team and that really showed, especially in the second half,” Haddock said. “This is something we can build on for the rest of the year, knowing that we played side-by-side with the best team in the country.”

Haddock scored her fifth goal of the season. In the second half, her missile to the back of the net reignited Auburn’s chances. Play got contentious late, with two yellow cards issued in the final 15 minutes, and at one point a ball off a Florida State foot went flying into a group of rowdy Auburn fans in the stands.

“I think the start could’ve been better and I think if we would’ve focused in that first two minutes, the game could’ve been a different story,” Haddock said. “But ultimately I’m really proud of the team and how they responded to everything that went down.”

Auburn’s win streak dating back to last season, previously the longest active winning streak in Division I, ended at 11 games.

Auburn opens SEC play Friday against Georgia at home. The Tigers will work to roll their stellar start to the season in non-conference play into a contender’s run in the league.

“I don’t think there’s a better game we could’ve played to prepare us,” Haddock said. “It doesn’t get much better than that Florida State team. They’re solid and they’re going to have a good year.

“We’re excited to hopefully see them again after this tough SEC conference we’re about to enter.”

Florida State goalkeeper Cristina Roque goes up to pull in the ball and end an Auburn challenge by Olivia Candelino (23) on Sunday at the Auburn Soccer Complex.